By Faber
1 month ago
Welcome to our latest prospect update brought to you by NHL Lines site Betway!
The Vancouver Canucks seem to always have a notable Swedish prospect in their system. Right now, there are a handful of youngsters playing in the SHL and Allsvenskan leagues, and two of those Canucks prospects have been selected to join Sweden’s U20 team in a November tournament that is typically used as a tune-up week for the World Junior Championships.
We saw Jonathan Lekkerimäki represent Sweden this past summer at the WJC, and the 2022 first-round pick should once again be on Sweden’s roster for the best junior hockey tournament in the world.
Elias Pettersson, better known as D-Petey, was not on that summer squad but finds himself on Sweden’s roster for the 4-nations tournament in Czechia. This tournament is typically Sweden, Finland, Czechia, and Russia playing against each other with what is expected to be their World Junior rosters.
This year, Russia will not be at the tournament that begins on November 7th and runs until the 13th.
We were expecting to see Lekkerimäki as a lock for the WJC team this December and getting a shot with Sweden at this prep tournament is no surprise.
As for D-Petey, we aren’t shocked but instead, pleasantly surprised to see his name on this roster. Sweden can return three of their defencemen from the summer WJC. Simon Edvinsson (AHL), Ludvig Jansson (Allsvenskan), and Anton Olsson (SHL) should all be locks to make Sweden’s U20 squad in December if they wish to participate in the WJC.

Pettersson has had a good start to the season, is playing extremely well in J20 action, and is beginning to show his strengths at the SHL level as well. Pettersson played over 12 minutes in an SHL game last week and continues to impress us after being drafted in the third round of the 2022 NHL Entry Draft.
We will follow this tournament closely to keep you updated on how both of the Canucks’ prospects perform. One thing is for sure, this a good step in the right direction for both of these two players to make Sweden’s WJC roster.
Here’s a look at the entire roster for the November tournament. 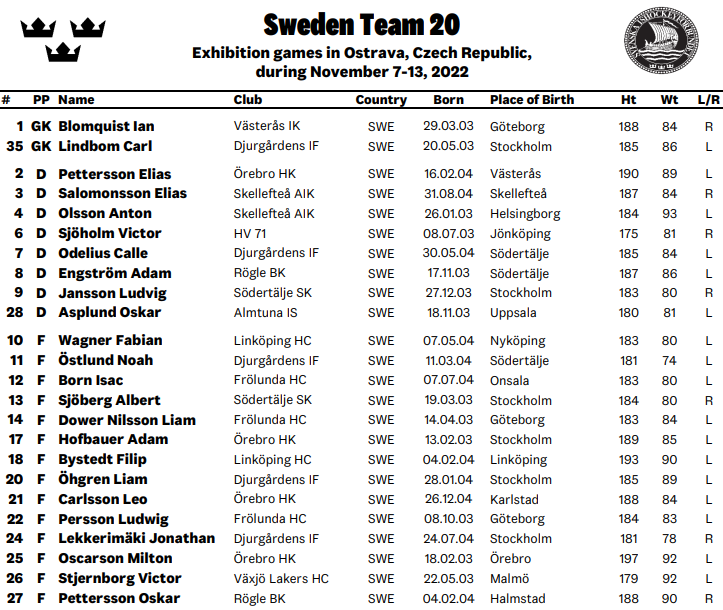 Roster via SweHockey.se
Notable Canucks prospects not on this roster include Lucas Forsell and Jonathan Myrenberg. It looks like it will be tough for these two to make Sweden’s WJC roster.
Sweden’s schedule for the tournament:
Wednesday, Nov. 9 vs Czechia U19
Thursday, Nov. 10 vs Czechia U20
Saturday, Nov. 12 vs Finland U20
Sunday, Nov. 13 vs Finland U19
News
Recent articles from Faber