Do the Vancouver Canucks now have the best forward corps in the Pacific Division? 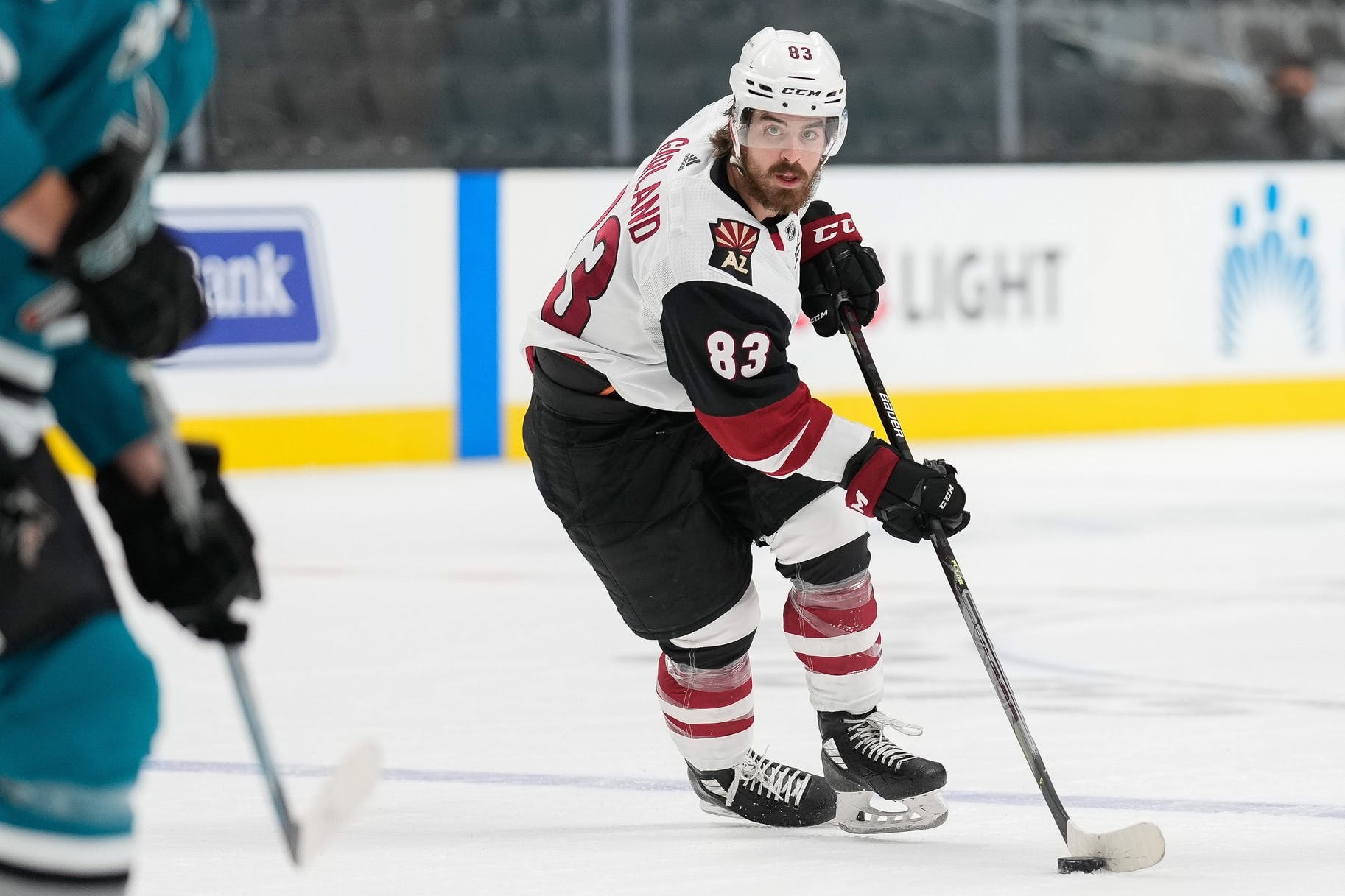 By Stephan Roget
1 year ago
We’ve come out the other side of a 2021 Free Agent Frenzy in which the Vancouver Canucks signed a staggering 15(!) unrestricted free agents, and most of the subsequent ink spilled in this mediasphere has focused on the Canucks’ blueline — and with good reason, as a floor-up rebuild has still left the team with more questions than answers on the backend.
Somewhat lost in all that, however, has been the much subtler transformation of the forward corps.
A transformation into what?
The best set of forwards in the Pacific Division, for one.
Don’t believe us? Come and see.

There isn’t an area of the forward lineup in which the Canucks have not improved this offseason.
The top line remains intact, but it will be buoyed by greater scoring support from the rest of the top-six, thanks to the addition of Conor Garland.
A second line of Garland, Bo Horvat, and Nils Höglander has the potential to be one of the best second lines in the league, period. Garland put up 39 points in 49 games for an anemic Arizona offence last season, while Höglander led the Canucks in 5v5 production. Horvat, meanwhile, stands to benefit heavily from changes lower on the lineup that should free him up for more offensive deployments.
The real game-changer is Jason Dickinson, the first real checking center the Canucks have had in some time. He’s one of the best shot and chance suppressors in the game, and the more minutes he’s able to handle against the best that opponents have to offer, the looser Pettersson and Horvat’s lines can play it up top. The arrival of Garland pushes the usually-reliable Tanner Pearson down to Dickinson’s wing, and they can probably count on being joined by the defensively-conscious and physically-imposing Vasily Podkolzin. That’s not going to be a fun line to play against for anyone.
The Canucks’ fourth line has spent the last few seasons getting buried in defensive zone-starts and floundering under them, but even that looks to be changing for the better. Top penalty killers Tyler Motte and Brandon Sutter provide the bedrock of the unit, and they’ll be joined by any number of rambunctious wingers; with Jonah Gadjovich, Zack MacEwen, Matthew Highmore, Justin Bailey, and Phil Di Giuseppe all valid options.
Even Abbotsford will be stocked full of call-ups with NHL experience.
In 2021, the Canucks finished fourth in goals-per-game amongst the teams that will make up the Pacific Division in 2021/22. They were miles behind the Vegas Golden Knights and Edmonton Oilers, a little back of the Calgary Flames, and still ahead of every single California franchise.
It stands to reason that the Canucks have increased their ability to score on the basis of Garland’s arrival, Pettersson’s restored health, and the freeing of Horvat from his shutdown bindings.
It also stands to reason that an improved bottom-six should reduce the numbers of goals scored against the Canucks, which would have ranked second-last in the Pacific last season, ahead of only San Jose.
But better doesn’t mean best. To see if that assertion was true, we’ll have to stack the Canucks up against all the other west coast forward corps.

Note: These are depth charts, and may not reflect actual line combinations.

We won’t spend much time on this stop, because the Ducks are in possession of easily the worst forward corps in the Pacific Division. Trevor Zegras will be a stud sooner rather than later, but his supporting cast still leaves a lot to be desired. Most of Anaheim’s other young talents haven’t panned out, their vets are showing increasing rust, and they don’t have the depth to compensate for it.

The Flames’ set of forwards is a little better now than it was in 2021, but not by much. Blake Coleman improves the unit across the board, but Calgary paid a preposterous amount for his services. Beyond that, the Flames have a good top line — arguably on par with that of the Canucks, but probably a little worse with Pettersson healthy — and a strong second line, but it is their questionable bottom-six that truly separates their quality from that of Vancouver. Mikael Backlund is a lynchpin, but everyone around him is suspect to one degree or another.
Expect the Canucks’ offence to leapfrog the Flames in 2021/22 at a bare minimum.

If you just stop reading after the top two lines, you could argue that the Oilers have the best bunch of forwards in the division. Connor McDavid and Leon Draisaitl do an awful lot to cover for shortcomings elsewhere on the depth chart, and Zach Hyman will make a major positive difference, but the holes are too big to ignore. The Edmonton bottom-six does contain some talent, but much of it is either past its prime or ill-suited to its current role. Kailer Yamamoto looks to be the best of the bunch, but he had a difficult season in 2021. Derek Ryan solidifies team defence down the middle, but he’ll also be asked to compensate for a lot of shoddy play from his linemates.
It’s quite arguable that, on the strength of that top-six alone, the Oilers’ forward corps still ranks ahead of the Canucks’. As an overall cohesive and effective unit, however, the Canucks have probably taken a slight lead — on paper, at least. Even better, the Oilers also have a recent history of underperforming their on-paper reputation.

The Los Angeles Kings will probably have the best forward corps in the Pacifici Division one day, but it is not this day. Their acquisition of some key veterans in Philip Danault and Viktor Arvidsson indicates that they’re planning to slowly-but-surely integrate their overstuffed prospect cupboard into the NHL lineup, a process that is wise but that will take time.
Between the likes of Quinton Byfield, Gabe Vilardi, Alex Turcotte, and Arthur Kaliyev alone, the Kings have the makings of a future top-six on par with any in the league. For 2021/22, however, they’ll continue to experience growing pains and probably over-rely on old hands like Anze Kopitar and Dustin Brown.
The Los Angeles forward group is not to be underestimated, but it’s also not to be feared — not yet, anyway.

Why, yes, that is former Canucks’ prospect Jonathan Dahlen penciled in to the Sharks’ top-six. That should be as clear a sign as any that the San Jose forward corps is in flux, and probably not anything to worry about for the 2021/22 season. The likes of Tomas Hertl, Evander Kane, Timo Meier, and Logan Couture still perform well enough, but they’re not supported by nearly the depth they require to keep their production consistent as they age through.
All it would take is a couple of rough seasons from players like Kane and Hertl to have the Sharks competing with the Ducks for the worst set of forwards in the division. They might already have the worst set of wingers.

As we once learned from the Vegas Golden Knights, it’s best not to judge an expansion roster until we’ve seen whether their whole is greater than the sum of their parts. Right now and on paper, however, the Seattle Kraken forwards just don’t hold a candle to those of their cross-border rivals.
Seattle is totally devoid of a first line, and their “first” line could definitely be seen as less talented than the Canucks’ second unit of Höglander, Horvat, and Garland. Further down the lineup, the Kraken are well-balanced, and their bottom-six is arguably as good as Vancouver’s, but it’s still nowhere near enough to make up for the disparity in firepower.
Expect the Kraken to put up a fight whenever they visit BC, but don’t expect them to outscore the Canucks on a regular basis.

We come now to the true contenders, the real champs whom the Canucks will have to knock down if they want to claim the “Best Forward Corps in the Pacific” crown.
In 2021, the Golden Knights had the third-best offence in the league, clocking in at 3.39 goals-per-game — a full 0.75 extra goals-per-game than the Canucks scored.
They’re also icing essentially the same group in 2021/22, having only lost Tomas Nosek and Cody Glass and replaced them with Evgenii Dadonov and Nolan Patrick, which might just be upgrades.
In practice, it’s doubtful that the Canucks have added nearly enough to their own arsenal to  close the gap.
On paper, however, it’s a far nearer thing.
Most apparently, Vancouver’s center depth annihilates Vegas down the middle. Pettersson is a true top line center, but the same can’t be said of Chandler Stephenson. Horvat and Karlsson are close, but the edge goes to Horvat. Dickinson should be far more effective in the bottom-six than Nolan Patrick, and it doesn’t really matter all that much if Nicolas Roy ends up better than Sutter.
The wings are a different story. Clearly, Mark Stone is better than any winger the Canucks possess. But a comparison between the top-four wings on either side looks a little more favourable. Stone, Max Pacioretty, Jonathan Marchessault, and Reilly Smith might still edge out Boeser, Miller, Garland, and Höglander, but it’s pretty close. The games of Marchessault and Smith are trending downward, and Pacioretty is 31, whereas Boeser, Garland, and Höglander still have plenty of room to grow.
What can be said definitively is that there’s less of a disparity here than at center, which leaves the Canucks ahead by a nose.
It is in the bottom-half of their respective forward corps, however, where the Golden Knights probably cross the finish line in first place. A bottom-six wing-set of Dadonov, Alex Tuch, Mattias Janmark, and Will Carrier is deadly on paper and seems to be even more effective in practice. A dynamite rookie campaign from Podkolzin helps here, but not enough to make up for the obvious gap in talent and results. Pearson and Motte are nothing to sneeze at, but they’re a clear step behind where the Golden Knights already are.
But, please, don’t be saddened by the end result. That there’s even a conversation to be had about the Canucks’ forward corps in comparison to that of the Golden Knights is a remarkable statement about how far the former has come.
That the Canucks now have probably the second-best forward corps in the Pacific Division, and at the very worst the third-best, is an indication of an offseason that was at least partially successful.
And, keep in mind, there’s still plenty of upward momentum available to key pieces like Pettersson, Boeser, Garland, Höglander, and Podkolzin. The Canucks could surprise yet.
Combine that with arguably the best goaltender in the division in Thatcher Demko, and Vancouver should be in line for a Pacific playoff spot, no?
Well, not quite so fast. There’s still the blueline to consider, and in that realm, the Canucks don’t stack up nearly as nicely — but we’ll have more on that later.
For now, take solace in the likelihood that — even if the Canucks’ defence keeps them on the outside of the postseason looking in — there will be a lot more goals to cheer in 2021/22.
Who could complain about that?
Uncategorized
Recent articles from Stephan Roget