Mikey DiPietro playing games, Rathbone’s success, and more: The top stories to watch in the final months of the Utica Comets’ season 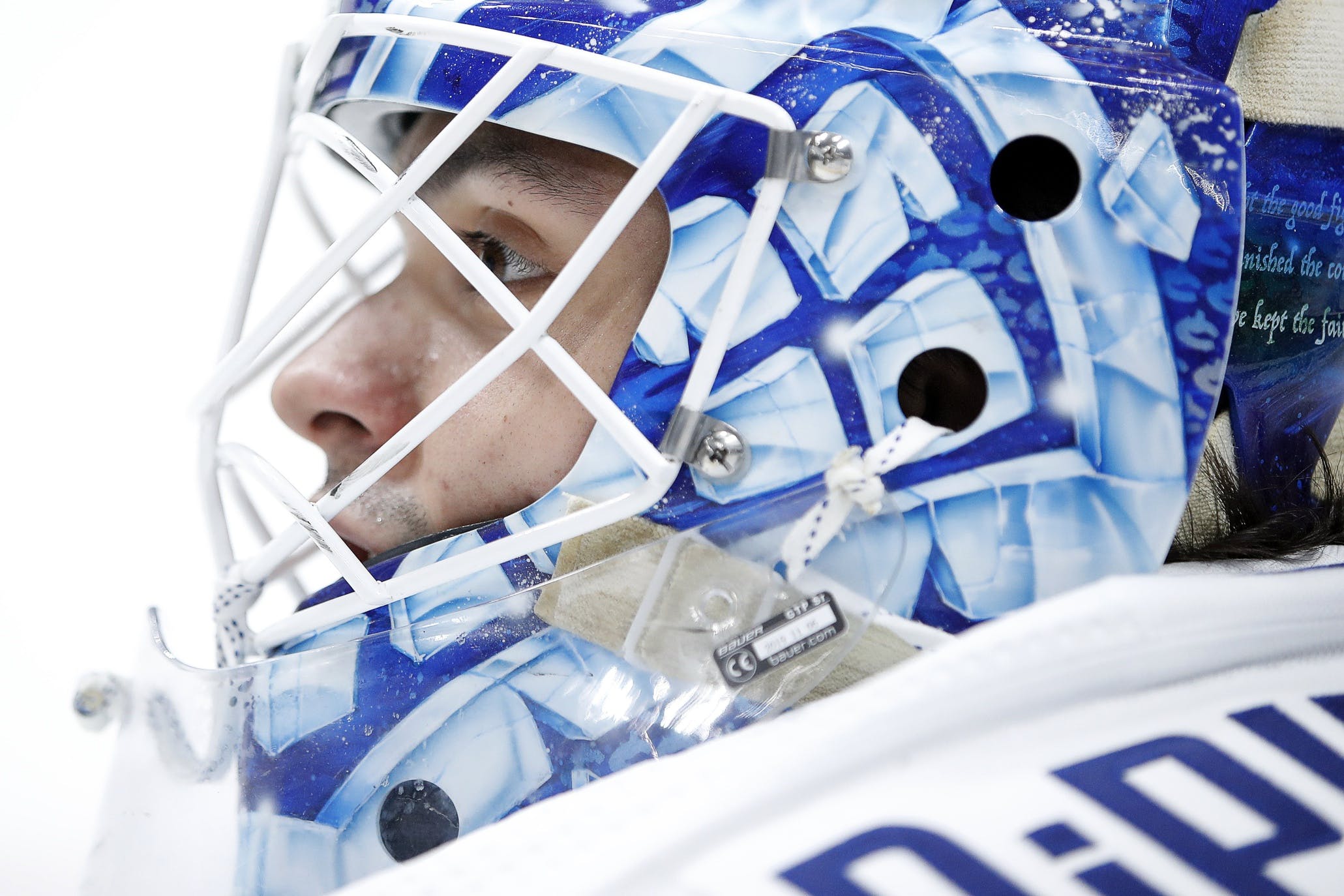 By Faber
1 year ago
The Utica Comets will play a lot more games over the next two months and it will be a great chance for the young prospects currently in the AHL to overcome some adversity.
During a COVID-19 impacted season, things are a bit different for the Comets. If you didn’t know already, they are only playing against four teams this season. 28 of their 32 games were supposed to be against the Syracuse Crunch and the Rochester Americans. The past couple of weeks have put the schedule in jeopardy due to some postponements but it seems like the Comets are close to getting back in action.
The schedule really cranks up for the Comets through April and May. They won’t have any playoffs but are scheduled to play all the way up until May 14th. For reference, the Vancouver Canucks’ regular season ends on May 8th.
There have been a lot of extended breaks for the Comets in the early season. Through the first two months of the season, seven breaks that were three-days or longer were originally scheduled. In the next two months, they were set to only have three breaks that were three days or longer. Here’s a visual example of the Comets’ schedule from their website. Schedule from uticacomets.com and doesn’t feature some of the extra games that were postponed from March
It’s going to be a great test for some young players and there are some exciting storylines to explore.

Can Jack Rathbone keep playing at this high of a level?

After being sent down to the Comets from the Taxi Squad on February 18th, Jack Rathbone has looked like an elite offensive defenceman in the AHL. He has a goal and four assists in his first four games since entering the Comets’ lineup. The points are great, but the one consistent thing that I love to see in his game is his ability to make passes out of his own zone that immediately creates offensive rushes for the Comets’ forwards.
His skating looks like it’s NHL ready and aside from just looking relatively small, he looks like he’s ready to push for an NHL spot. There just isn’t any room in the lineup and Olli Juolevi could tell you that first hand. Right now, Rathbone is partnered up with fellow Canucks defence prospect Jett Woo. The pairing looks electric on the ice and since Rathbone has joined the pairing, Woo has looked much more confident in the offensive zone and is attacking the net more with his skating and shooting.
The next two months will be a great NHL demo for the young Rathbone. He’s clearly good enough to get a shot at the NHL this season, but things might just not go that way unless we see some injuries on the defence. The next two months represent what playing games on a professional schedule is all about. The 21-year-old Rathbone has been superb in his small sample size.
He’s doing everything that you’d like to see from a young defenceman in the AHL. The problem is that since being sent down over a month ago, he has only gotten into four games due to COVID cases that have left the Comets without any game action since March 10th.
The next two months will be an excellent test for Rathbone and if he passes it with flying colours, you have to believe that there is a real shot for him to compete for top-four time with the Canucks next season. He might slow down offensively, as it’s very possible that he stops producing at over a point per game.
The thing I’d love to continue to see is his ability to influence puck momentum. He does a great job of making the puck just go in the right direction more often than not. He’s got a good stick in the defensive zone and is fast enough to keep up with anyone in the AHL. He does lack some size and strength but when that comes, he is going to be an even stronger shooter and have better balance when going into physical board battles.
He moves around the ice at such a high level in the AHL that makes me confident that the NHL game will not be a shock to him. Rathbone is an exceptional skater who shines with the speed that he creates when skating backwards, has quick feet on turns and the agility to walk the blue line in the offensive zone. He just moves around the ice with what looks like such little effort. He’s incredibly light on his feet.
Consistency will be the question for the remainder of the season.
This is one of the most exciting storylines for the rest of the Comets season.

Sitting on a Taxi Squad and practicing goaltending all season long feels like a punishment for a hockey crime.
That’s how Mikey DiPietro’s 2021 has been so far. I’m very excited to see DiPietro make his way to the NHL. Last season he had a breakthrough in the middle of the season and he looked like a new goalie for the second half of the season. DiPietro finished the season with a 21-11-2 record and had a 0.908% save percentage in his first AHL season.
He looked ahead of schedule for development and it would be exciting to see what he can do at the AHL level after working with Ian Clark for this much time and potentially looking like a completely different goalie.
That’s why he needs to get into games. There has been so much work done by Clark and the rest of the staff that DiPietro needs to experience the changes to his game in a live environment. You can teach and teach and teach but if you aren’t going to get an opportunity to use what you’ve learned, it’s hard to grow from just teachings, even if they are coming from one of the best goalie minds in the sport.
He needs to see some game action and with the Comets’ upcoming schedule, there are a lot of starts to be had if you are the Comets’ starting goaltender.
If the Canucks want to get DiPietro into game action, the time to send him down to Utica would be now. Their lack of a third NHL goaltender really hurts the development of DiPietro.
I don’t think the Canucks are confident enough to play Arturs Silovs or Jake Kielly in an NHL game. Both goalies could be called up to be a Taxi Squad goaltender. Silovs is collecting dust with the Manitoba Moose with just one start on the season while Kielly has a 0.886 save percentage and still needs time in the AHL to develop his game.
It shouldn’t matter really, the odds of that goalie being forced into action for more than one or two games is very low. The Canucks need to get DiPietro down to Utica and see how he looks during game action. There are a lot of good things going on down in Utica and David Quadrelli recently expanded on this in an article about how Clark and AHL goalie coach Curtis Sanford work in tandem to develop their goaltenders.
You just don’t want to see his potential be limited and hope he can find somewhere to play sooner rather than later.
I’ve heard quotes from InGoal Magazine’s Kevin Woodley and Comets owner Robert Esche about DiPietro’s work ethic being one of the best they have ever seen.
I’d love to see him down with the Comets and the young group of Rathbone, Woo, Kole Lind, Jonah Gadjovich and others.
There is a lot of good going on down in Utica and I’m liking the decision that Head Coach Trent Cull is making with his lineup decisions to give the young players the best chance to succeed.

Speaking of Gadjovich, can his scoring continue?

Scoring eight goals in nine games forces the storyline of Jonah Gadjovich to be followed through these next two months of hockey.
He’s been amazing around the crease. Gadjovich is simply overpowering the opposition around the crease and there’s something about his game that looks quicker and less stiff compared to his previous two years with the Comets.
I’m going to keep this one short and sweet.
Gadjovich is a big and strong hockey player. He clearly worked his ass off this offseason and has come back looking much better physically. He hasn’t necessarily silenced the critics of his skating but he is undeniably thinking quicker and reacting to the play at a much higher speed.
Scoring eight goals in nine games isn’t easy to do and if he continues at this pace or one close to it, he will be a player to watch at next year’s Canucks training camp.
His dominance around the crease is impressive to watch and he is quick enough with his stick that he doesn’t miss a lot of the open nets that are presented to him from his spatial awareness around the crease.
It’s a good start to the season for Gadjovich and his scoring will be an easy storyline to follow for Canucks fans.

Carson Focht and Will Lockwood have both looked impressive in their first AHL season and each have some skills that stick out at the AHL level.
Trent Cull is winning me over with his lineup decisions. I didn’t think we would get to see Rathbone-Woo but they were out there together in Rathbone’s pro debut.
The Comets have said they are bringing fans back into the arena in the month of April. With the recent game cancellations due to COVID, we will see if that comes to fruition.
Does anything happen to Sven Baertschi? Will he ever get a call up to the Taxi Squad or the NHL? Who knows?
Lukas Jasek and Kole Lind playing as top-six centres. Lind is reportedly in Vancouver getting his facial injury looked at while Jasek is now the centre on the Comet’s top line when they return to action.
There’s a lot to be excited about and there’s a lot of hockey to come for the Utica Comets.
We will continue to have you covered here at CanucksArmy with all the top Comets news as their season trucks along through COVID cancellations and playing 7/8ths of their games against two opponents. It’s a weird season and it’s going to be a fun finish if the Utica Comets can get back on the ice soon.
Uncategorized
Recent articles from Faber