Desperate and down to his final strike, Jim Benning shouldn’t have any runway left as Canucks GM 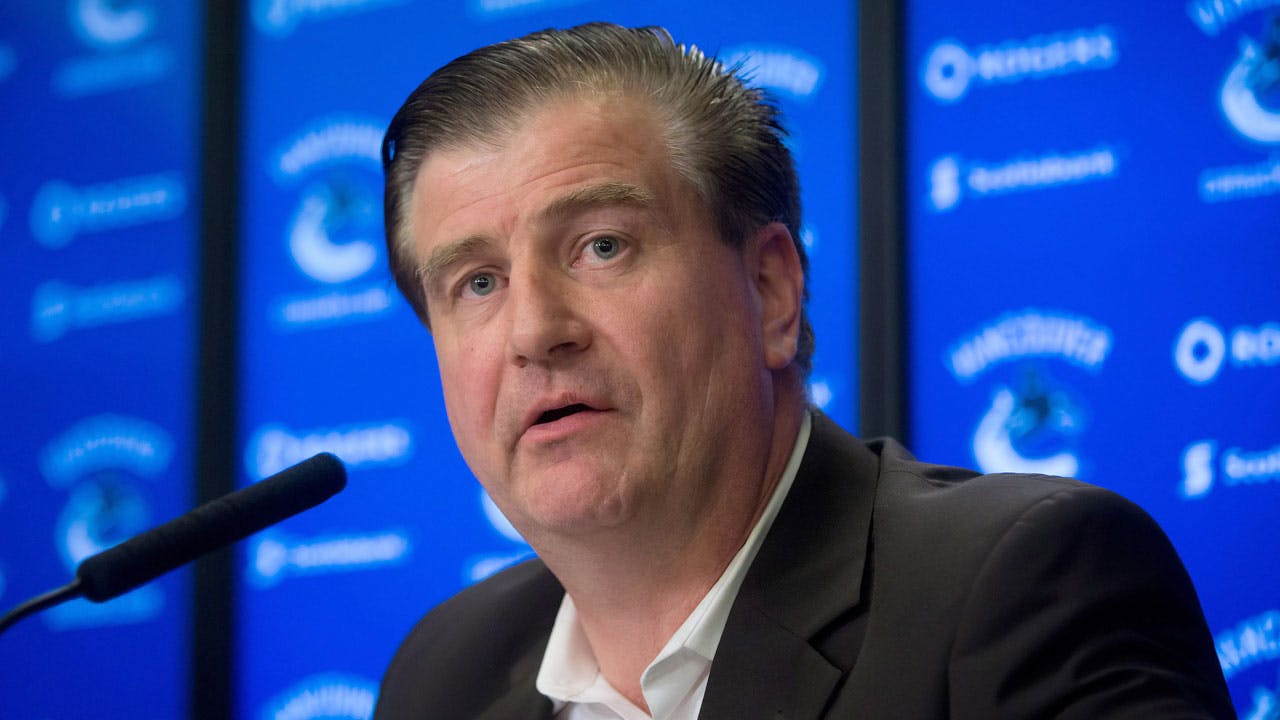 By Faber
1 year ago
Jim Benning should be on his final strike as the general manager of the Vancouver Canucks.
The Canucks just wrapped up a season-high seven-game homestand that saw them go 2-4-1 and give up the first goal in each of those seven games. Giving up the first goal has been a trend with this team. They have done it in 12 of their 14 games played this season.
No matter if you’re frustrated with the management, the coaches or the players — you’re correct.
All three have been a letdown in a year where the owner and general manager made it clear they expected to be a playoff team and that anything less would be a disappointment.
At this current stage in Benning’s tenure as general manager, most fingers should be pointed at him. Benning has had eight years to put together a team that can compete to make the playoffs and has gone all-in to make that happen this season.
Just over the past two and a half years, Benning has traded away the Canucks’ 2021 first-round pick, 2020 first-round pick, 2022 second-round pick, 2020 second-round pick and 2019 third-round pick, and 2021 third-round pick.
That type of aggressiveness towards adding roster players while sacrificing the future is typically only done by NHL general managers who are on the brink of becoming a Stanley Cup contender or general managers who deserve to be fired.
And right now, the Vancouver Canucks certainly don’t look like a team that is on the brink of becoming a Stanley Cup contender.
Everything they have shown so far this season leans towards a team that needs reconstruction more than anything.
Jim Benning has had a long runway as the general manager of the Vancouver Canucks.
Canucks fans deserve better, and right now, Benning may only have one big move left before ownership finally ends the employment of the second-longest tenured general manager in Canucks history.
So, here we are, after a 2-4-1 homestand and a 7-1 ass-kicking from the Nathan MacKinnon-less Colorado Avalanche, Benning finds himself at a fork in the road. As a fork has four tines, there are only four possible moves that can be made for Benning to salvage his job and this season.

When in doubt, this is a simple move for a general manager to make. There are a few big-name coaches that are without a job as well as potentially using an interim coach like Brad Shaw or Trent Cull.
Bruce Boudreau is available and was on Vancouver sports talk radio this week.
Claude Julien is another big-name coach who is currently without a job. Dan Bylsma is currently an assistant coach in the AHL and could be interviewed with the permission of the Seattle Kraken. Bylsma interviewed with the Canucks back in the summer of 2014.
It’s hard to tell from the outside because all of the players are going to say the right things in the media but the question of “has Travis Green lost the room?” seems fair to ask. Green and his staff have a penalty kill that is clicking at just 62.8% on the season and has given up 11 goals on this last 20 penalty kills.
Aside from the penalty kill, the players need to receive confirmation that the system that Green wants to run is working. Though there have been at least a handful of players who have not been on their A-game in the early part of the season, the system that the coach wants to run should help get you victories. Ask the New York Islanders or the Carolina Hurricanes — those two teams have a system that works well with their personnel and a coach that corrects the personnel to play into the system.

Another option for Benning to buy some time is to make a massive trade.
Is it time for the Canucks to move Brock Boeser to Minnesota?
Could J.T. Miller fetch you a defenceman and a draft pick?
Will packaging up Mikey DiPietro and a draft pick get you a defensive defenceman?
These are all options that Benning could explore. I don’t believe he will shake up the core that he has built but maybe it’s time he tries something. The team needs a better third-line centre and needs a left-shot defenceman who can kill penalties.
Benning may be able to find a smaller trade that he can pull off and likely a small trade is the most probable outcome from this early struggle in the season.

It’s possible that Benning keeps his job without making any moves underneath of him. Benning’s job will just require the Canucks to go on a burner for the remainder of the season.
The Canucks have played 14 games and sit only five points out of a playoff spot.
Yes, I know it’s strange to talk about a playoff spot this early but here’s what also needs to happen for them to be in a playoff spot after game 82.
For the Canucks to have a more than 50% chance of making the playoffs, they need to finish their remaining 68 games with a 34-27-7 record as per sportsclubstats. The Canucks would need to get 59.5% of the possible points in the final 68 games of the season. Through Benning’s tenure as a general manager, this type of winning only happened during Benning’s first season when the team finished 48-29-5.
If you’re an optimist and you want to believe that it is possible, the Canucks will need to start winning some games quickly because a 34-27-7 record doesn’t really happen to a team that hasn’t been able to put three wins together over their first 14 games of the season.
Travis Green has had three winning streaks of five games or more in his time as the Canucks’ head coach. He will need to add to that count for the team to make the playoffs this season.

Twitter has been calling for it for a long time now. A horrendous start to the season may end up being the straw that breaks the camel’s back on Benning’s eighth season as general manager.
The fanbase has spoken in the past and is continuing to voice its opinions.
Credit where it’s due, Benning has made some good moves over his time as general manager of the Canucks.
That being said, he has also made multiple changes to the organization’s personnel — on and off the ice — which many believe to be fireable offences, and it already feels as though missing the playoffs this season could be the last straw for ownership.
Firing Benning would certainly reinvigorate the fanbase.

Something needs to change

Perhaps it’s simply the players. It’s true that Elias Pettersson and some of the other top-end players need to begin to put up more of a push. They are getting chances to make something happen with plenty of power play time but simply haven’t consistently found results.
The Lotto Line is jam-packed with talent but can’t break through and find a way to look like a top-NHL scoring line once again. They have been controlling Corsi well but are negative when it comes to actual shot share and expected goals, and are doing horribly when it comes to high danger shot attempts in their 79 minutes of five-on-five as a trio.

Something needs to change and it needs to change quickly. Benning, as well as ownership, are the two parties that most control what happens next. The two-man management relationship between the owner and the general manager has few options left.
Whether it’s the play on the ice, the man who is coaching, the roster construction, or the man who constructed the roster — something needs to change. The Canucks have given up too many future assets to be a team that misses the playoffs for the seventh time in nine years under Benning.
This culture of being a losing franchise cannot happen any longer, and the passionate Canucks fans deserve better.
Benning has fouled off some tough pitches in what feels like a 22-pitch at-bat.
Desperate and down to his final strike, Jim Benning shouldn’t have any runway left as the Vancouver Canucks’ general manager.
Uncategorized
Recent articles from Faber