As a defence-first forward, Jason Dickinson is playing well but needs to start finishing his chances 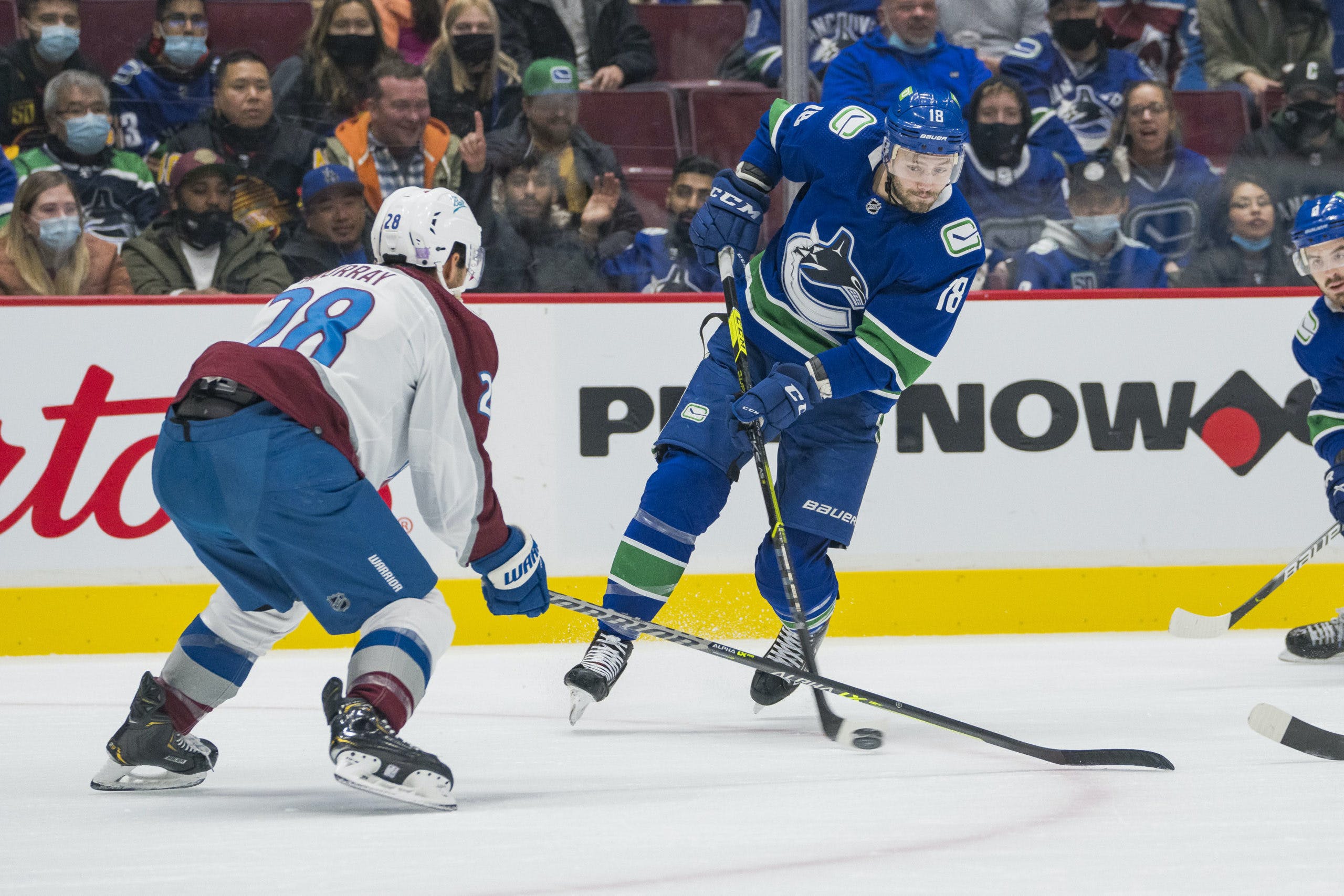 By Faber
1 year ago
After a coaching change, Jason Dickinson is getting a second chance at a first impression with the Vancouver Canucks.
With four points in 29 games, Dickinson hasn’t been noticeable on the scoresheet through the beginning of his career as a Canuck. After scoring in his fifth game, Dickinson went 23 games and over 300 minutes of ice time without scoring another goal. During that stretch, Dickinson held a positive control of the goal share and was getting scoring chances.
Dickinson has had a lot of chances this season and seems to be snake-bitten through the early part of the season. I’m not saying he’s going to be a top scorer on the Canucks but he should probably have more than four points. You could see the relief on his face after he scored an empty-net goal in the Canucks’ last game before being postponed.

Dickinson has seen even more scoring chances since Bruce Boudreau has come in as the Canucks’ head coach.
We have seen Dickinson play fourth-line centre as well as left-wing on Bo Horvat’s line under Boudreau. During the six-game stretch with Boudreau as the coach, Dickinson is second on the Canucks in expected goals with 2.02. That only trails Brock Boeser over the past six games. 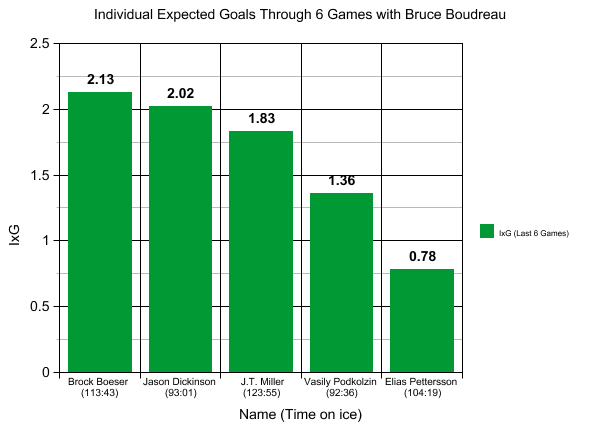 Since playing under Boudreau, we have seen Dickinson have some grade-A chances but so far has only been able to score on the empty-net goal shown earlier. Dickinson uses his size to find space in front of the net but struggles to have the finesse to finish on golden opportunities.
Here’s a perfect example of Dickinson finding that space in front of the net but not having the finish that would have given the Canucks a two-goal lead at the time.

Over the past six games, Dickinson has been getting involved in quick, transition offence. He has shown the foot speed to jump into plays and seems to have strong knowledge for going hard to the net. The problem continues to be his finishing ability.
Here are a couple of examples of Dickinson getting involved in a quick-strike offence.
First, he does a good job of recognizing the space between himself, the net and the defender. He makes a drive to the net and is rewarded with a solid scoring chance that doesn’t result in a goal.

In the next example, he wastes no strides as he attacks the net off a good read that results in a partial breakaway.

The chances are coming but the finish is lacking.
After going 23 straight games without a goal, you have to hope that he was simply on the hockey gods’ wrong side.
Now, under a new coach, Dickinson is being played in different positions and has more confidence thrown his way. Some of that newfound confidence from the coaching staff will be coming from new assistant coach Scott Walker.
Walker was Dickinson’s junior coach for all four of Dickinson’s OHL seasons with the Guelph Storm. The assistant coach on that team was current Canucks amateur scout Todd Harvey. When traded for and re-signed, the expectation on Dickinson was that there was more offence to give. We have not seen it yet this season and Dickinson is still without a double-digit goal season in his seven-year NHL career.
The inability to finish is beginning to become consistent in Dickinson’s game, but with more confidence, he may be able to find his way into double digits at some point during his three-year contract with the Canucks. The good news is that his defence has been as good as advertised. Dickinson has been excellent this season when it comes to not allowing goals against. Out of all forwards, Dickinson is currently second when it comes to goals against at five on five per 60 minutes played.
Through 329 minutes of five-on-five, Dickinson has only been on the ice for seven goals against. 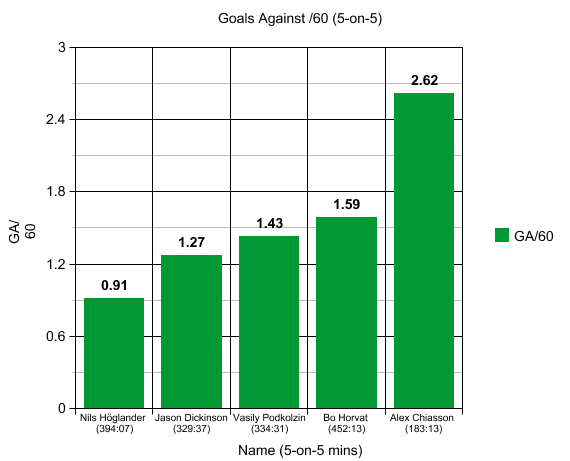 He may not be adding much in the offensive zone but he is clearly bringing a lot in the defensive zone. Dickinson projects to be the type of player who is more valuable in a playoff series when you are trying to shut down an opposing top-line. This should be when he is most valuable to a roster.
One of the big downsides to Dickinson’s season has been his inability to play centre. He is currently sitting with a 39.9% win percentage in the faceoff circle and is well aware of how bad he has been in the circle. Back on November 5th, Dickinson wasn’t pleased with his performance in the faceoff circle, calling his performance “atrocious,” and it has not improved since then. He looks like a defensive winger that can help a bottom-six line limit scoring.
As a player on a three-year deal making $2,650,000 a year, we have seen much worse for much more of a cap hit. Through it all, Dickinson is one of only six Canucks forwards with a goal share above 50% and he has not looked bad in his new role with Boudreau as the coach. We are sure to see him continue to move around the lineup as Boudreau finds his way with his new team.
Potentially more offence is to come with added confidence coming from a new coaching staff and finally getting the monkey off his back with an empty-net goal. Dickinson has not exceeded expectations this season but aside from not being a centre, he hasn’t let the team down as well. If he can finish on a few more of his scoring chances as the season goes on, he may have a chance to reach double-digit goals.
For now, he’s a solid bottom-six winger who does a great job of keeping the puck out of his net and if he can chip in a few goals of his own, we may have a different outlook on the 26-year-old winger who is signed for two more years after this current season.
Uncategorized
Recent articles from Faber