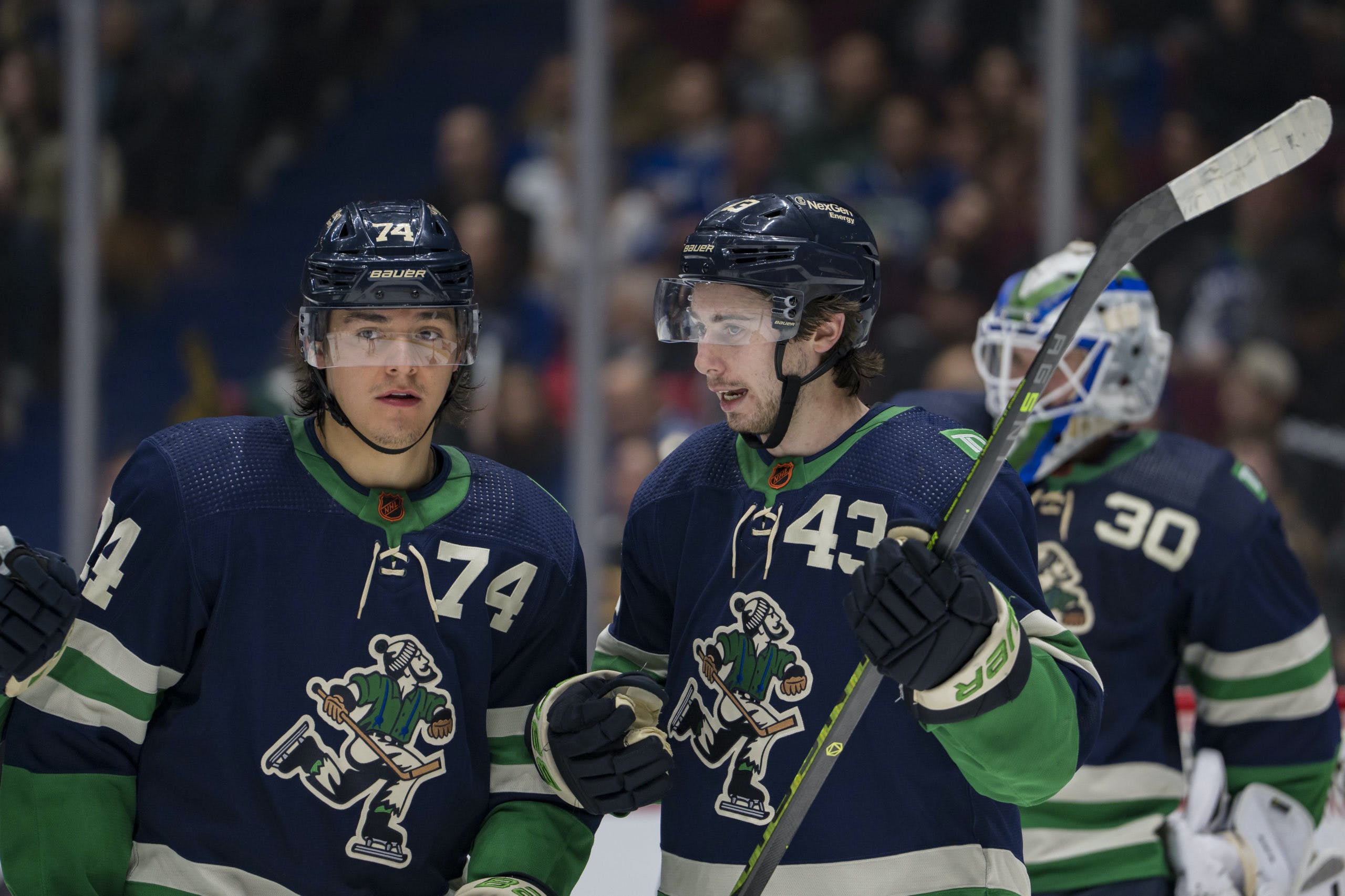 By Noah Strang
1 month ago
The Vancouver Canucks have a special talent in Quinn Hughes. The talented defenceman has already set the franchise record for points by a defenceman in a single season and is still in his early 20s. He’s the most talented defenceman to ever play for the Canucks and is locked up for the next four years on a very reasonable cap hit.
Maximizing Hughes’ talent has been a puzzle for the Canucks ever since he first stepped into the lineup. For all his amazing qualities, he also has some clear faults and it’s crucial to pair him with a good partner to get the best from the superstar.
Throughout most of Hughes’ NHL career so far, the Canucks have paired him with larger, defence-first partners. Chris Tanev and Luke Schenn have been two of the most used in that spot and both have worked to varying degrees of success. Recently, however, the Canucks have been using a different mould of player alongside Hughes.
Ethan Bear is a different type of defenceman than Tanev or Schenn, but one that is showing the ability to mesh with Hughes nonetheless. The right-handed defenceman is a solid puck mover that relies more on his smarts and skating than size and strength to defend.
“They’re both quick and they can both jump into the play,” head coach Bruce Boudreau said when asked about the pairing. “And when that happens, and they don’t have to play against the other team’s top line, it frees them up to be a little more aggressive offensively.”
After a few games together, the results have been encouraging. Bear and Hughes look comfortable together and they both appear to be playing well. But do the deeper numbers support that hypothesis?

How have Hughes/Bear performed together?

5-on-5 stats this season for the Hughes/Bear pairing
While they’ve only played about 80 minutes together at 5-on-5, Bear and Hughes have shown natural chemistry. The Canucks are controlling 58.46% of the expected goals and 65.38% of the scoring chances with them on the ice at 5-on-5.
Both players are performing better while together compared to other pairings. While the Canucks are controlling less than half of the Corsi, expected goals, and scoring chances with Bear or Hughes alone on the ice, those numbers skyrocket when together, as shown in the image above.
It’s a small sample size, but it’s enough to get excited about the possibility of these two playing together.
Two of the caveats that must be mentioned for these stats are that the pairing has had favourable deployment, and that they’re benefiting from a high on-ice shooting percentage of 14.29%. Boudreau has been keeping these two smaller defencemen away from other teams’ top lines and the two have also been starting their shifts with an offensive zone faceoff almost 60% of the time, resulting in easier opportunities.

Is the Huggy-Bear pairing a viable long-term option for the Canucks?

While there are going to be concerns around the defensive capabilities of a Hughes/Bear pairing, they’ve managed to dismiss those so far. However, keeping this same pace over a full season is a much more difficult task and is something that we’ve yet to see from these two.
That doesn’t matter too much, as at worst, they’ve proven that the pairing can be an excellent option in certain situations, specifically those where the Canucks are down a goal and need to spark some offence.
While Luke Schenn has been hailed as a great partner for Hughes — and the 57.58 on-ice goals for % speaks for itself — many of the underlying numbers don’t support that philosophy. The Canucks have been out-chanced and out-shot this season with those two on the ice, relying on a slightly above-average on-ice save percentage of 91.67% at 5-on-5 to produce those results.
In fact, the advanced numbers show that the Canucks have been much better with a Hughes/Bear pairing compared to a Hughes/Schenn duo.

Quinn Hughes and Ethan Bear vs Quinn Hughes and Luke Schenn
At this point in time, Hughes and Bear haven’t played together enough for the pairing to be discussed as a serious option for the Canucks long-term plans. However, if they keep playing like this in the minutes they do get together, it won’t be long before fans around the league are familiar with the “Huggy-Bear” pairing.
Editorials
Recent articles from Noah Strang