Dedication to winning from stars like Elias Pettersson and others took centre stage in Canucks’ victory over the Avs, a message that will hopefully stick 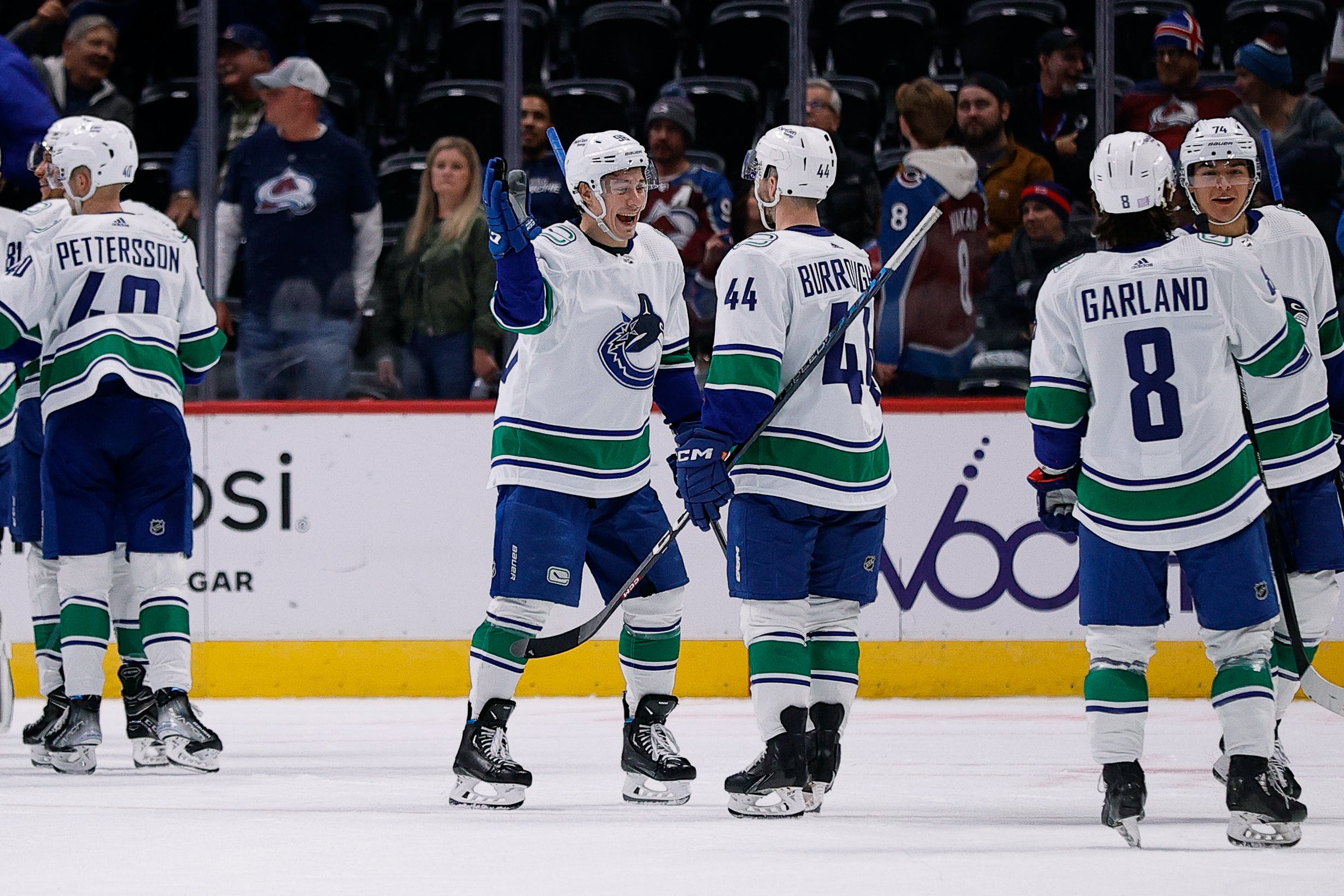 By Lachlan Irvine
2 months ago
The Canucks’ 4-3 win over the Colorado Avalanche on Wednesday evening wasn’t necessarily the result of a perfectly executed game plan, dominance at both ends of the ice, or even competent referees. More so, it was the work of a few players who lifted the team around them to victory.
Two of those players were Vancouver’s pair of former Avs: Spencer Martin and Sheldon Dries.
Martin’s inspired play this season needs no introduction. Last night he held the Avalanche to just one goal at even strength and made 33 saves, including a game-saving stop on Devon Toews late in the third, as he slid across the net and got his pad on Toews’ shot from the doorstep.
The other, Dries, had a whole lot more to play for.
Dries’ role as a regular AHL call-up always has some kind of expiry date on it, when players return from various injuries and ailments. But as he faced the franchise that signed him to his first NHL contract in 2018, Dries seemingly played with the determination to never be sent down again.
First, he read a pair of odd bounces in front of the Colorado net to knock a loose puck past Pavel Francouz to tie the game for the Canucks early in the third.
Then with eight minutes to go, Dries made a crucial play along the boards during a 4-on-4 and helped set up Ethan Bear’s eventual game-winning slap shot.
The efforts of Martin and Dries were crucial in securing both points for the Canucks, but without help from the bigger names, it could’ve been a moot point. Enter Elias Pettersson.
Pettersson has been a man on a mission throughout the season, but his outing against the Avs was like a cliff notes version of his year. He set up Ilya Mikheyev’s opening goal just 21 seconds into the game by winning a battle behind the Colorado net, but his most valuable efforts were in the defensive end.
Pettersson’s skills as a penalty killer have grown as the season has gone on, and he’s begun to stymy even the most talented power play specialists. In last night’s contest, he forced Cale Makar into a crucial mistake that earned Pettersson a shorthanded breakaway and the Canucks an offensive zone faceoff.
But Pettersson saved his most clutch moment for last. As the Avs pressed for a tying goal and began to swarm Spencer Martin’s crease, the puck eventually worked its’ way to the front of the net as Martin was caught swimming out of position. All that was standing between Makar and the tying goal was Elias Pettersson’s body, and he made it count with a massive block.
The kind of intensity that spurs Pettersson to throw his own face in front of a Cale Makar shot in pursuit of victory is not new. He’s been playing at that level all season long. But his commitment to winning hasn’t rubbed off on the majority of his teammates, and that fact is part of why the Canucks have sunk so low.
Last night was the closest Vancouver’s gotten to seeing most of their players finding that fire and punching above their weight class to win. The Avalanche were clearly the better team on paper yesterday, but thanks to the likes of Dries, Martin, Ethan Bear, Bo Horvat and Brock Boeser, the Canucks were able to weather the storm and rise above it.
If this game and their recent 4-1 victory over the Kings were any indications, it seems that more and more players are getting the message on how to pull the Canucks above the .500 mark for the first time this season.
If they can avoid the repeated mistakes that led them to multiple blown leads, along with arguably their worst collapse of the year against Vegas earlier this week, Vancouver can at least hold their heads high on full team efforts for the rest of the year.
The Canucks have shown they can beat the Avalanche when the effort goes even a few lines deep. Maybe now that the proof of concept exists, the message will finally stick in the locker room.
Editorials
Recent articles from Lachlan Irvine