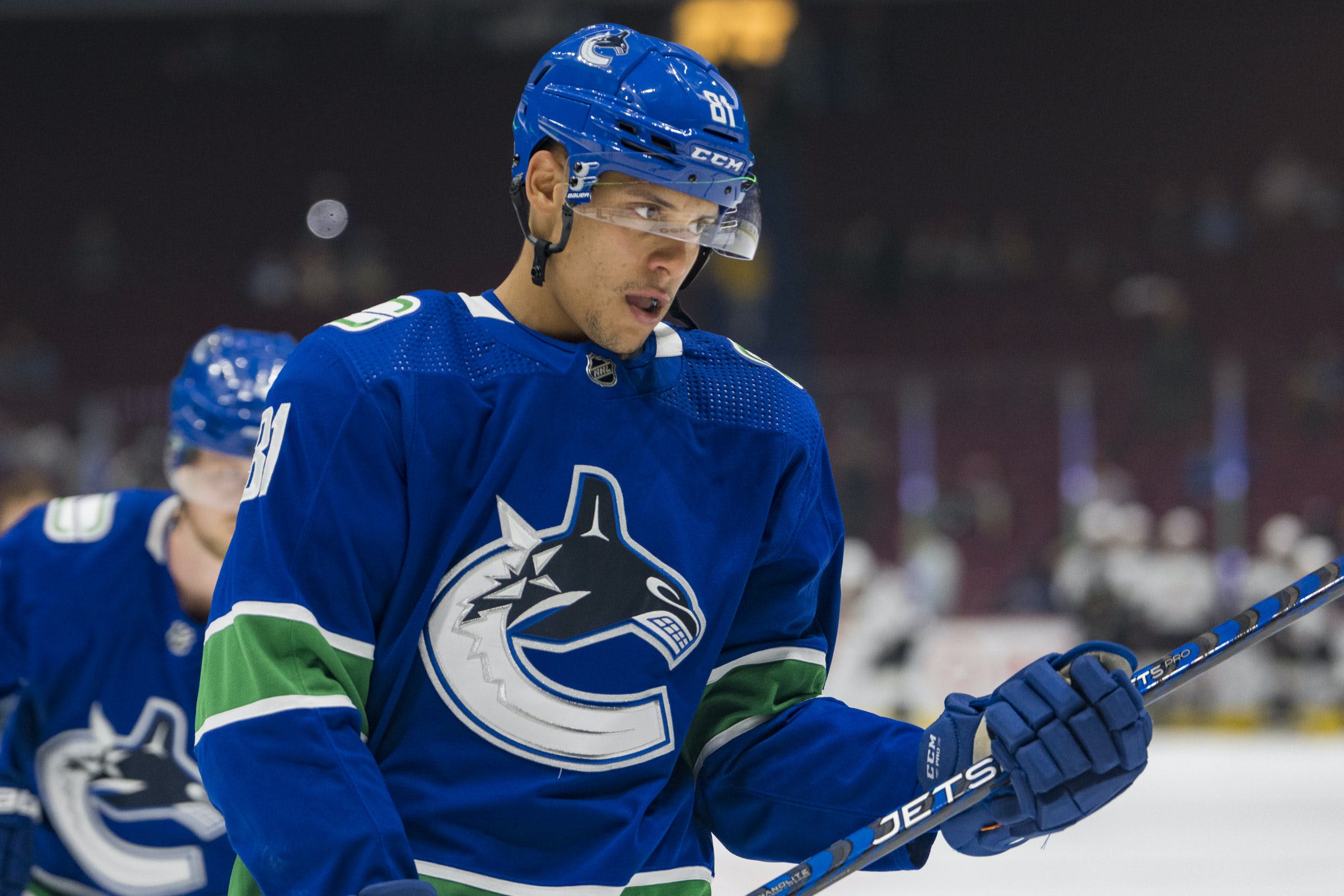 By Faber
1 month ago
“I’d get in on the forecheck, play the body, force a turnover, take the puck, quickly find an open teammate and he’d bury a goal. That would be perfect.”
That’s 26-year-old Dakota Joshua’s answer when I asked him what a perfect shift for him would look like.
When the Vancouver Canucks signed Joshua this summer, those who subscribe to the analytics community embraced the signing.
I, on the other hand, was not sold on GM Patrik Allvin saying that Joshua was definitely an NHL player. I remember seeing Joshua play for the Utica Comets a few seasons ago and though there were some analytic models out there that suggested that Joshua is an effective NHLer, I didn’t see it in some of the tape that I watched after the signing.
“Our group believes that he’s capable of doing more and, with more opportunity, become a full-time NHL player,” said Allvin after signing the 26-year-old to a two-year contract with an average annual value of $825,000.
Joshua appreciated the confidence put in him by the Canucks’ management group.
“I haven’t had the cleanest or clearest path to get to where I am today,” Joshua told CanucksArmy. “So, to finally get some of that support, it goes a long way.”
Before he put on a Canucks jersey, Joshua was a tweener. He had spent most of his pro career in the AHL and didn’t really have stats that popped off the page until his playoff run last year.
During his 18-game playoff run with the Springfield Thunderbirds, Joshua was a menace.
He scored seven goals and added eight assists through the Thunderbirds’ run to the Calder Cup finals, where they lost to the Chicago Wolves in five games. Joshua also had 58 penalty minutes during that playoff run and learned a lot about himself as a player during the run to the finals.
“It was not a situation I wanted to be in when I first got sent down there after playing in the NHL playoffs,” said Joshua. “Obviously it wasn’t the spot I wanted to be but looking back on it, it was good for my confidence.”
“I was able to be a key leader on that team and to have a run as we did, it was good for everybody. There’s a lot to take from it. The biggest takeaway for me was that I proved to myself that I was an NHL player and not an AHL player.”
Fast forward to today, where Joshua is being used in a bottom-six role with an NHL team. It requires a certain type of player to have success in the type of game that Joshua plays and so far into the season, he is checking off a lot of those boxes.
He’s using his speed and strength to be engaged in a fourth-line role but the most impressive part of Joshua’s game is what he is doing in the offensive zone. 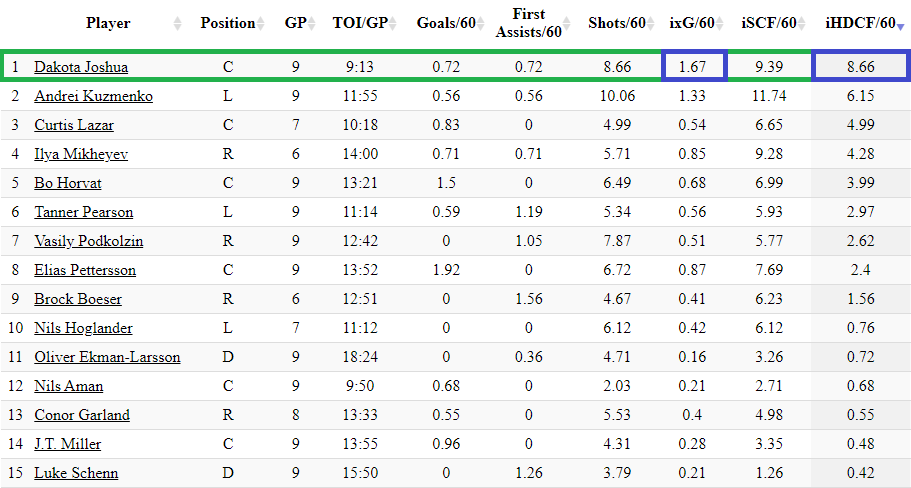 Though he won’t likely be moving into any top-scoring lines anytime soon, Joshua’s ability to create offence so far this season in the role he has been given is extremely intriguing. Joshua leads the team in individual expected goals/60 at five-on-five and even more impressive than that is the stronghold he has on being the team leader of high-danger shots/60.
If you’re looking for a player to simply go to the next hard and create havoc, Joshua is your guy. 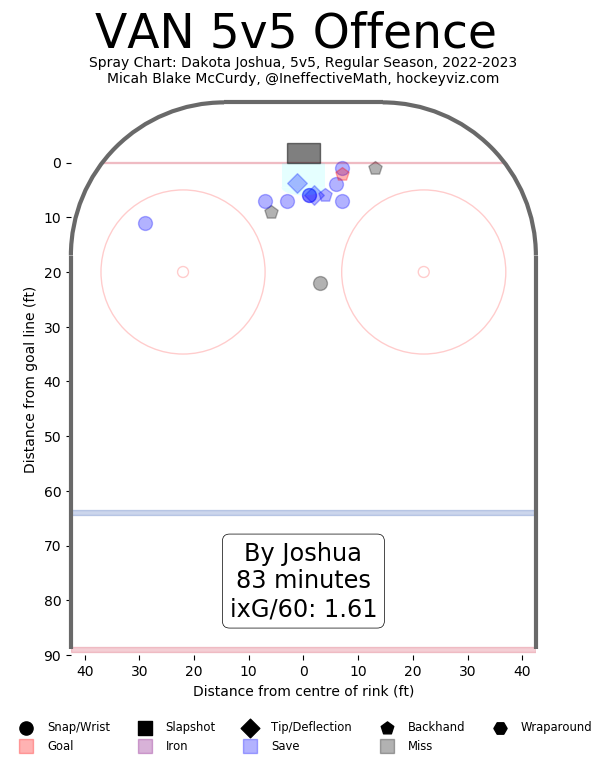 Almost all of his shot attempts are within five feet of the crease.
We have been impressed with how well Joshua is able to initiate scoring chances. When the puck is near the net, Joshua sees red and works to either take a shot or set his linemates up for a shot.
“Offensively, the most successful part of my game is below the circles,” said Joshua. “That’s the kind of game I have to play at this level. A big key is simply getting the puck below the tops of the circles and making chaos happen and then hopefully getting good bounces out of it. I’m just trying to keep it simple, when you get more confidence, you end up making good plays in tight but right now, I’m just keeping it simple. You can’t go wrong that way.”
We’ve seen Joshua’s most consistent linemate be Nils Aman. The two have played 65:54 together so far through the first nine games of the season and Joshua’s ability to find the space that Aman is heading to has benefited both players.
Joshua set up Aman’s first goal of the year and has begun to start developing chemistry with his Swedish centre. Joshua is beginning to recognize how to use Aman’s speed and is starting to pass to space that Aman is going to instead of simply passing the puck to the player.
“Chemistry takes time as we all know but [Nils Aman] is a really good skater,” said Joshua. “I’m just trying to put the puck in places where he can get in a foot race. The more games we play, the better we’ll get at it. There’s still more chemistry to build there but we’re starting to get the hang of each other.”
Even if you put aside the stellar scoring chance numbers, Joshua has been able to lean on his physicality to be a strength of his as he believes that getting in hard on forechecks, making a tough night on the opponent, and being physical is crucial to his game.
“Being a physical presence is another way that I can stick in this league,” said Joshua when asked about how important being physical is to his game. “Whether it’s a big hit or a little hit, whatever I can do to create a turnover is what I’m looking for. I just try to finish every single hit whenever I can.”
Even with well-known DAWGs Kyle Burroughs and Luke Schenn on his team, Joshua is leading the Canucks in hits/60.
Here’s a one-minute montage of his hits so far this season.
Out of the 481 players who have played at least 80 minutes of five-on-five play this season, Joshua is 16th in the NHL for hits/60.
On top of the offence and physicality, Joshua is holding his own in the defensive zone. 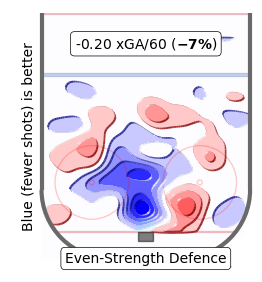 He is keeping the puck away from the net and has been very disciplined when it comes to penalties, only taking one two-minute minor on the season.
All in all, the Canucks are getting more than they bargained for with Joshua to this point. He is only adding $825,000 to the salary cap and with players like him, Curtis Lazar, Nils Aman, and more, we can say goodbye to the days of overpaying for bottom-six forwards.
We are going to continue to see an impactful bottom-six player if Joshua continues to go to the net hard, finish every check and use his speed to skate hard on the forecheck. He’s grateful for the opportunity that this organization is giving him and is surely going to continue to work hard on every shift as he continues to show that he does in fact belong in the NHL as an everyday player.
Editorials
Recent articles from Faber