Counting on seven key bounce-back campaigns, the Vancouver Canucks are shaping up for a storybook season 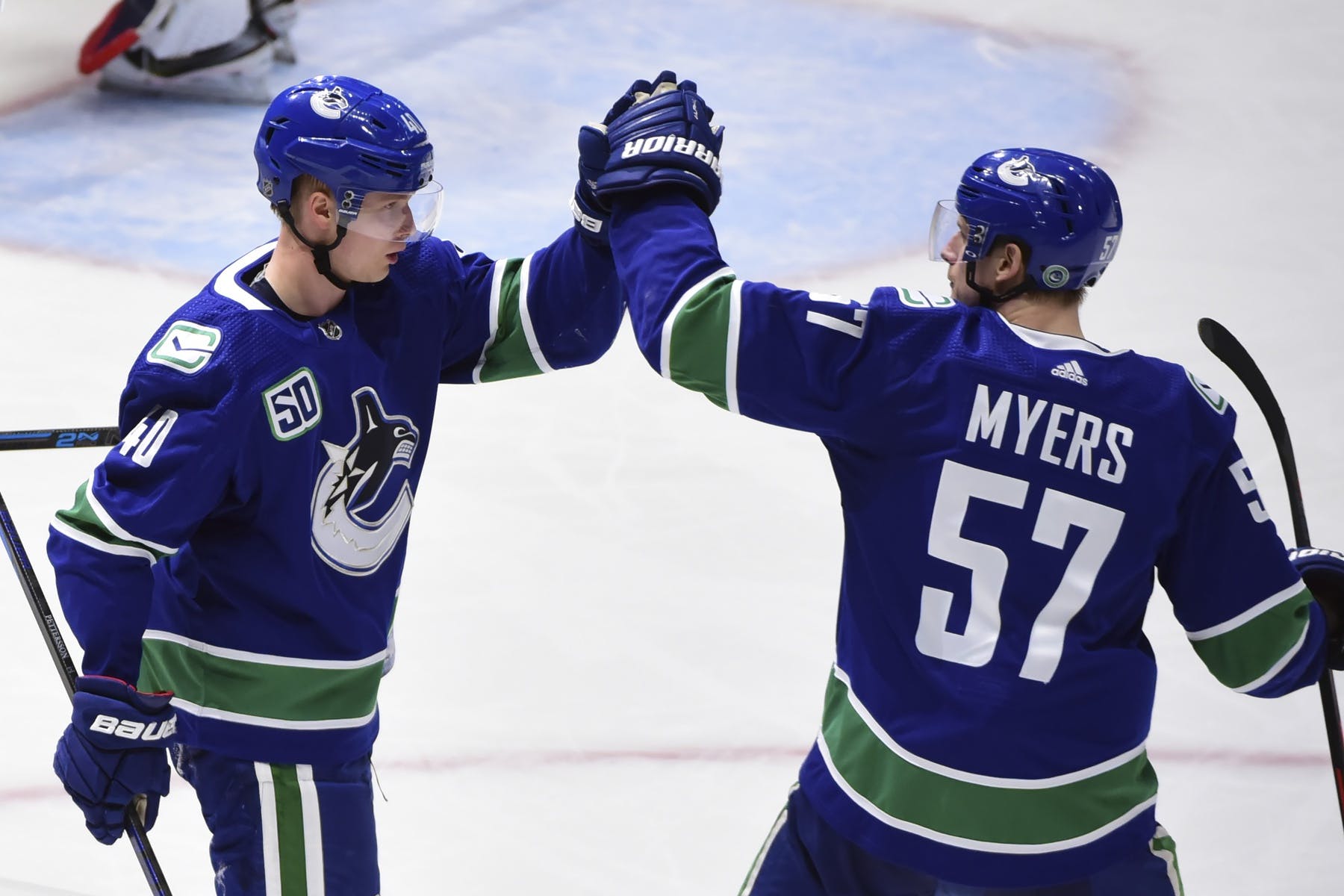 By Stephan Roget
1 year ago
When it comes to predicting a hockey season that has yet to officially begin, there’s always a choice to be made between optimism and pessimism. Is the future win column half-full, or is it half-empty?
And when it comes to predicting the performance of a team with as many question marks as the 2021/22 Vancouver Canucks, the choice is only more pronounced.
As they skate through training camp and into the regular season, the Canucks are counting on bounce-back campaigns from seven key players if they have any hope of participating in the 2022 Stanley Cup Playoffs. That’s a lot of season-to-season improvements to be banking on, but there’s nothing that can be done about that now.
Whether one believes the players in question will rebound or not is entirely up to that individual, and it’s certainly open to debate.
But what’s not up for debate is this: should the seven players in question bounce back, and should those bouncebacks push the Canucks into the postseason, then 2021/22 would have to be considered a real storybook season. One for the ages. One worth remembering, years down the road.
So why not hope for it? Everybody likes a good story.

OEL is not the most important Canuck, but he may be the one whose resurgence is most closely tied to the team’s success. The numbers don’t really tell the tale — if anything, 2021 was a good year for Ekman-Larsson offensively — but anyone who watched him in Arizona for the last few seasons can tell it just fine. Since a career season in 2016/17, he’s been spiralling and stagnating in equal measure. By the end of his time with the Coyotes, OEL was shiftless, unmotivated, and defensively porous.
But if he can manage to not be those things in Vancouver, his impact will be immediate. OEL is still a smooth-skating, hard-hitting two-way dynamo, and those qualities are already valuable enough. Doing all that and forming a genuine shutdown pairing with Tucker Poolman goes a long, long way toward making the Canucks a playoff game.
Chances of bouncing back: 60%
OEL is slightly on the wrong side of 30, and his downslide was a lengthy one, so it’s hard not to say that him bouncing back is a 50/50 proposition at best. We’ll give him a minor bump because of how excited he seems to be to have left Arizona.

Ekman-Larsson and Hughes are the two most important members of the Vancouver blueline, and they’re both in need of some serious improvement. It isn’t an exaggeration to state that the Canucks’ playoff hopes hinge on whether they succeed or not.
Unlike OEL, Hughes isn’t coming off four years of misery. He’s coming off a classic sophomore slump, and he’ll still be 21 years old until opening night has come and gone.
It also wasn’t all that much of a slump offensively, or even in terms of possession. Hughes just bled goals against when he was on the ice last season, and that needs to not happen if he’s going to continue to be trusted with top-pairing minutes — and if the Canucks are going to be a contender, because they don’t exactly have any other top pairing candidates waiting in the wings.
All Hughes really needs to do to “bounce back” is to tighten up defensively and continue his natural progress everywhere else in his game. It doesn’t seem like much to ask, but that doesn’t make it any less crucial.
Chances of bouncing back: 85%
There are some who will argue that Hughes will never be an effective defensive player, and that he’ll be relegated to his status as a power play specialist forever. Those people are probably wrong. Hughes adapted from the pace of the NCAA to the NHL virtually overnight. His capacity for self-improvement should not be underestimated.

Every Canuck had a difficult year in 2021, but Pettersson more than most. Injuries ruined his season, but it wasn’t really even a season worth ruining in the first place. The 22-year-old struggled to find consistency in his third campaign, seeing considerable dips in virtually every stat column. Numbers aside, Pettersson simply didn’t look as creative, confident, or deadly in 2021 as he had in seasons prior.
But Pettersson is back to full health, he’s had a long summer off to recover, and he’s sporting a brand-new three-year contract that incentivizes him to start earning that double-digit 2024 paycheque. Take this one to the bank.
Chances of bouncing back: 90%
With a bridge contract, Pettersson has clearly bet on himself. You should, too. This is the year he officially joins the NHL’s elite tier.

Joke about Myers all you like — and we know how much you like — but he’s one of the Canucks’ most important players on the merit of his salary and placement within the right-side depth chart alone. Myers being at his best, and not at his worst, is of three-fold benefit to Vancouver. It gives them an on-ice asset, removes one of the leading causes of their goals against, and mollifies their cap allocation woes.
In other words, a bounceback from Myers should be worth a fair bit in the standings for the Canucks. But what does a Myers bounceback even look like? He wasn’t far off his career standard in most statistical categories, and inconsistency is definitely an ongoing trend for him.
For that answer, we look to the eye test. Everyone knows Bad Myers when they see him. If he can close up his gaps, cut down on the flubs, and reduce the cross-checking minors, most will be satisfied.
Chances of bouncing back: 60%
The Canucks don’t need Myers to suddenly become worth his $6 million cap hit. He played better for the Canucks in 2019/20 than he did in 2021. If he can just get back to where he was a season ago, that will be enough.

With Pearson, the numbers don’t really paint an accurate picture of just how much of a step-back 2021 was for him. He dropped well below his career pace in all major categories, but his prior year-and-a-half in Vancouver had seen him produce well over-and-above his usual pace. Pearson’s PPG plummeted from 0.65 in 2019/20 to 0.35 in 2021, a near-halving.
Regardless, Pearson was rewarded with a shiny new three-year contract. Earning it might not entail him scoring like he did in his career year, but at least getting back to his average would be a difference-maker for the Canucks.
Chances of bouncing back: 50%
Pearson’s fate is truly a coin flip. If he remains on Bo Horvat’s wing, he’ll almost certainly score more this year than he did last. If he slides down to a shutdown line alongside Jason Dickinson, he’ll still struggle to put up points.

Miller is a tricky player to nail down. By his own overall career standard, last season was still a great one for Miller — his second-highest scoring pace yet, and by quite a bit.
On the other hand, the best scoring pace of his career came the year prior in his first campaign with the Canucks. Between 2019/20 and 2021, Miller’s PPG dipped from 1.04 to 0.87, a nearly 20% decrease.
The endless giveaways and the audible on-ice frustration certainly made the situation appear even worse to the folks watching at home.
Maybe it’s not fair to expect Miller to snap all the way back to point-per-game status, and maybe that year was an anomaly. His body of work prior to arriving in Vancouver would certainly suggest so. And even if he can’t, he’s still going to be a valuable member of the team. But if he can, it definitely makes the Canucks a much more dangerous opponent — in fact, it gives them one of the best top lines in hockey.
Chances of bouncing back: 55%
As with Pearson, Miller getting back to PPG is a matter of linemates. If he sticks with the Lotto Line all season long, he’s got a very good chance. If he spends time centring lesser players, his statline will inevitably suffer.

Halak’s 2021 numbers don’t look all that bad, until they’re understood within the context of playing for the powerhouse Boston Bruins. His 2018/19 and 2019/20 campaigns for the Bruins were much, much stronger.
The backslide was enough for Boston to hand the crease over to rookie Jeremy Swayman, but not enough to scare the Canucks away from signing him. As the definitive backup, Halak is absolutely vital to Vancouver making the playoffs — unless Thatcher Demko gets injured, of course. But Halak being able to spell Demko off on a regular basis will make a difference when it comes to Demko’s freshness in the postseason, and that’s pretty important, too.
Chances of bouncing back: 41%
Halak is 36 and has had some injury troubles of late, so these odds seem especially appropriate.
Uncategorized
Recent articles from Stephan Roget