Could the Canucks and John Klingberg still be waiting for one another? 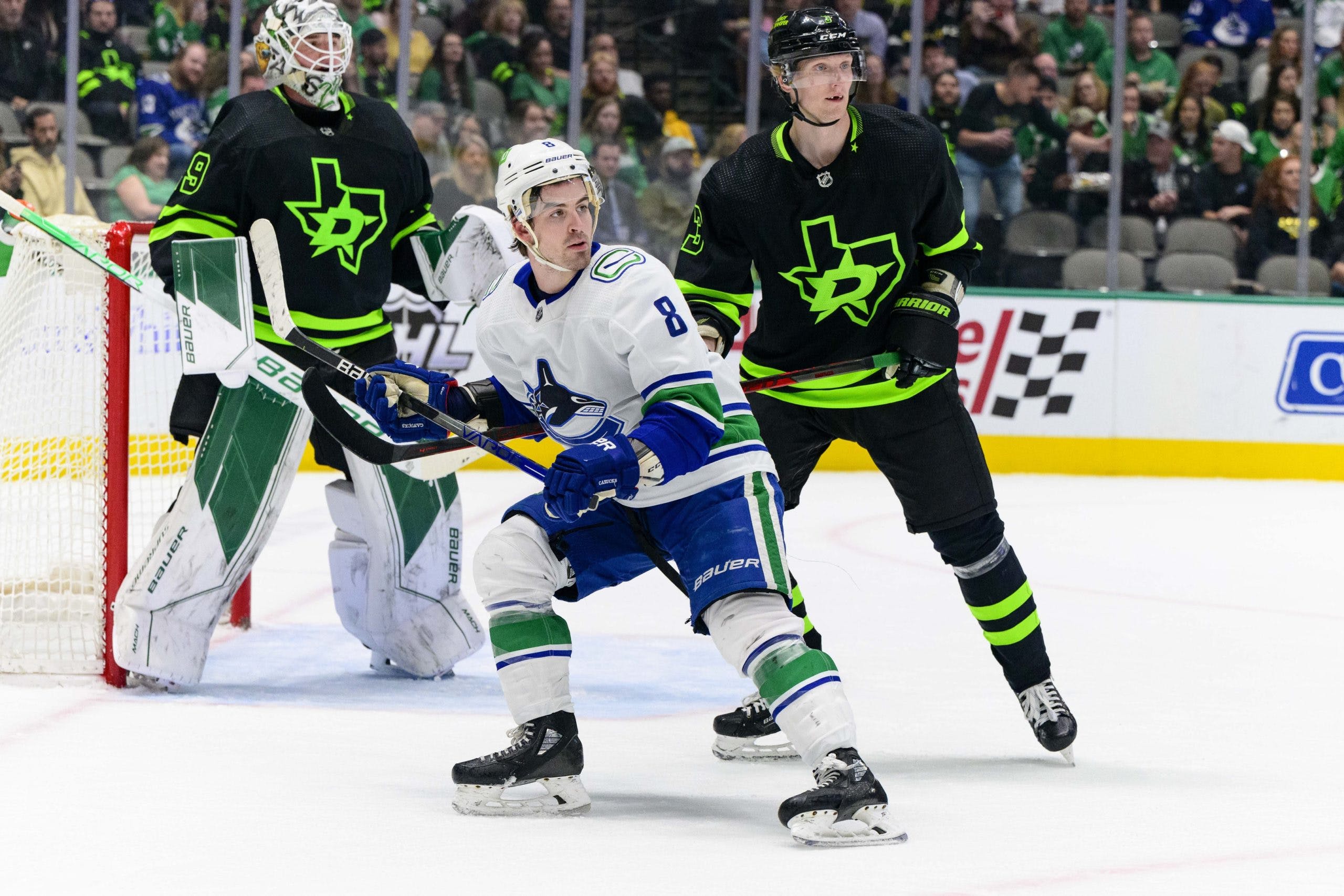 By Stephan Roget
4 months ago
With all the excitement and bitterness surrounding the trade of Matthew Tkachuk to the Florida Panthers, one could definitely be forgiven if they missed another, far more speculative bit of player movement news that dropped on the very same day.
David Pagnotta, editor-in-chief of The Fourth Period, along with local reporter Irfaan Gaffar, had a chat on Canucks Central in which they both expressed near-certainty that the Vancouver Canucks had made a play for John Klingberg during the 2022 Free Agent Frenzy, and that the interest was mutual, but that the Canucks were unable to clear out the cap space required to sign him.
More specifically, Gaffar speculated that the trade-that-never-happened drama from Draft Day was a part of this larger story. He believes that the Canucks tried to trade Tyler Myers — possibly to the New York Islanders — and that the deal fell through late in the game. This may, or may not, have been the result of Myers activating his limited no-trade clause.
In any case, no cap-clearing trades occurred, and the Canucks did not sign Klingberg.
But here’s the funny thing…no one else did, either.
We’re now almost three weeks on from the draft and two weeks past the opening of free agency, and Klingberg remains an unrestricted free agent on the open market.
Surely, the 29-year-old top-pairing RHD has received offers. If he wanted to, he almost certainly could have inked a fairly lucrative contract with someone by now.
That he hasn’t suggests that Klingberg might be holding out for one destination in particular.
Could it still be Vancouver?
The smartest money may seem to be on Klingberg waiting around for a return to the Dallas Stars, with whom he’s spent his entire career prior to this. But a closer look at the Stars’ cap situation draws that into question.
As of this writing, Dallas has about $11 million in cap space left to spend, which might seem like plenty of room for Klingberg. However, a sizeable chunk of that $11 million has already been earmarked for Jason Robertson and Jake Oettinger, perhaps the two most important players — aside from Miro Heiskanen — in the franchise.
Beyond that, there are no obvious methods through which the Stars could clear enough cap space for Klingberg. Moving Radek Faksa wouldn’t be enough, and moving Anton Khudobin’s buried cap hit will prove nigh-impossible.
Furthermore, the Stars already committed new money to a big-ticket UFA in Mason Marchment and a replacement RHD in Colin Miller. It does seem that, for now anyway, Klingberg’s time with the Stars has come to an end.
So, why is he still out there on the open market, waiting?
Consider that there was already reported mutual interest between the Canucks and Klingberg.
Consider that Klingberg is exactly what the Canucks should be looking for as a 6’3”, two-way, top-pairing stud RHD — even if his age isn’t ideal.
Consider that Klingberg is a very good friend of Oliver Ekman-Larsson, himself still signed with the Canucks for the next five years.
How good of friends are they? Good enough to still be friends after OEL filled Klingberg’s hotel room with 1400 giant balloons.
Consider that, as a Swede, Klingberg would feel right at home in Vancouver.
Consider, perhaps most importantly, that this late into free agency, the list of suitors for Klingberg’s services has to have dwindled to some degree. That could be the key to the Canucks not only getting Klingberg under contract, but doing so at a more reasonable term and rate than may have been possible on Day One of the Frenzy.
The arguments against committing a massive contract to the 29-year-old JT Miller all apply to handing one to the 29-year-old Klingberg, too. But there’s a difference to be found in the fact that Klingberg plays the position of greatest need within the organization. And there’s hopefully difference to be found in their actual demands, too.
If Klingberg were amenable to a four or five year contract with an average falling between $6 million and $7 million, that could definitely be amenable to the Canucks, as well.
Which, of course, brings us back to cap space.
The Canucks still need to clear up room if they want to have any hope of fitting a Klingberg-sized contract under the cap.
As was previously mentioned, moving Myers goes a long way toward achieving that goal, and replacing his cap hit with Klingberg’s on the right side of the blueline would constitute a major upgrade.
If Miller is traded this offseason, as is expected, that also opens up nearly enough room.
Even a trade out of two smaller-ticket players, like Conor Garland, Tanner Pearson, or Jason Dickinson, could be enough to squeeze Klingberg in, so long as not much salary comes back in return.
GM Patrik Allvin and POHO Jim Rutherford working tirelessly in the backend to cut cap, all the while communicating to Klingberg’s camp that they intend to sign him whenever they have the room, could go a long way toward explaining both the Canucks’ and Klingberg’s actions to this point.
You’ve got a team with an incomplete roster on one hand, and a player that would complete said roster just waiting around, weeks into free agency, looking for a place to sign.
It could be a perfect fit. Or it could all just be a coincidence.
Either way, we should get an answer sometime in the next couple of weeks.