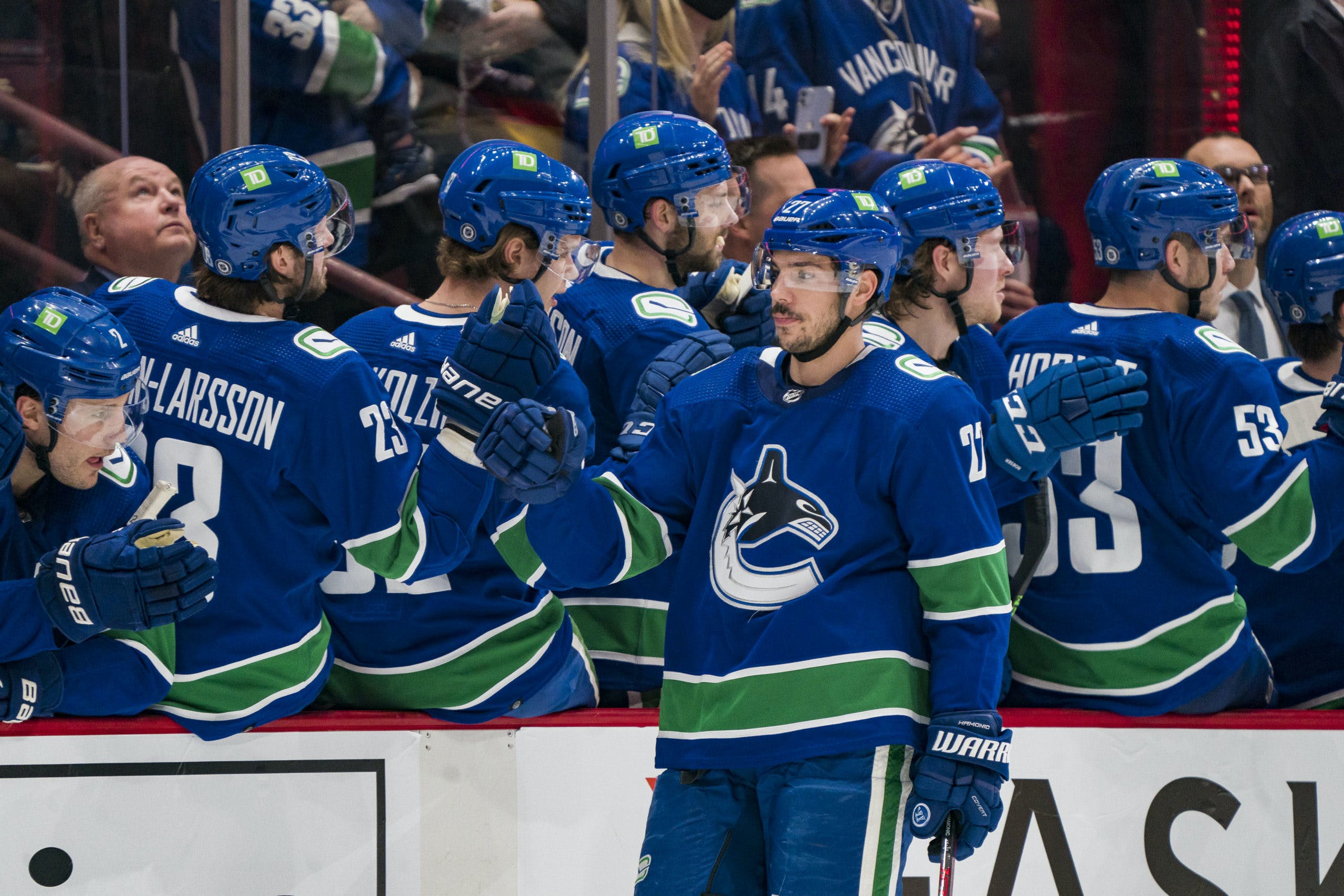 What a difference (almost) a year makes.
Shortly after being hired, Canucks president of hockey operations Jim Rutherford did an interview on Sportsnet 650 in which he spoke about his management style and how the Canucks planned to approach the remainder of last season and beyond.
In the interview, Rutherford spoke about the shortlist of candidates he had to fill the Canucks’ then-vacant general manager positon.
Among other things, Rutherford talked about the then-struggling Elias Pettersson, and was confident that the young Swedish forward would turn things around eventually.
“I do think he’s taken strides in the right direction, compared to where he was the first 20 games or so,” Rutherford said. “He’s making some headway, albeit it’s not as quick as we all would like. But we know it’s there. He’s done it before. And he’s just gotta keep working at it.”
Pettersson did indeed keep working away at it, and the result is him now leading the Canucks in points.
When Rutherford speaks, people listen. That’s no different now than it was to begin 2022, and that’s why this article lands at our number five spot.

This was a truly bizarre story, as a report came from The Athletic’s Kevin Kurz that the San Jose Sharks were terminating Evander Kane’s contract after he travelled to his hometown of Vancouver while COVID-19 positive.
Kane was also suspended by the NHL for 21 games earlier that season after he produced a fake vaccination card in an attempt to skirt the league’s rules.
After the Sharks terminated his contract, the Edmonton Oilers swooped in to pick him up, and re-signed Kane this past offseason.

3. “The Arizona Coyotes are out of control and it’s time for the NHL to take action” by Noah Strang on May 22nd, 2022

The writers at CanucksArmy are all known for different things. Stephan is known for his lengthy think pieces, Faber for prospects, Lachlan for goalie stuff, Cody for Abbotsford tracking, Michael for telling us why the Canucks statistically won or lost games, and of course Wyatt for making me stay up too late editing The Stanchies.
But Noah has emerged as one of the writers more willing to give his take unapologetically and shoot from the hip. When he’s got something on his mind, he doesn’t hesitate to put pen to paper and tell it as he sees it. More than one of his editorials will be seen in tomorrow’s top 25, but this one about the Arizona Coyotes’ arena situation lands in our number three spot.
In the op-ed, Noah wrote:
“The NHL already plays a little brother role in the North American sports world, trailing the MLB, NFL, and NBA in every metric imaginable. Hockey is a great product but the fact remains that it doesn’t sell in every American market and trying to force it results in embarrassing situations like this one that only attack the legitimacy of the league.
“How could you argue that the NHL produces a product of the same quality as those other leagues when one of the franchises is playing on a college campus? The Coyotes’ situation has gone from bad to worse and it’s time that the NHL steps in and takes serious action before it turns catastrophic.”
There’s more in the full article of course, but you get the idea. Clearly, folks appreciated what Noah had to say, because this was one of our most widely shared articles and was one of the ones folks spent the most time reading on CanucksArmy this year.

Hey, I know him!
Like many of you, I watched the Canucks take on the Tampa Bay Lightning on March 13th, 2022. I was in the press box for this game, a 2-1 loss for the Canucks on home ice, meaning I didn’t watch or listen to any broadcasts of it.
But when I got home that night, I saw a clip on Twitter of Tampa’s colour commentator Bobby Taylor making the rounds all over social media.
In the clip, Taylor reacts to Canucks head coach Bruce Boudreau asking for an explanation from the officials of why a high-sticking call that was assessed to Tampa defenceman Jan Rutta was reviewed and taken back. The announcer calls Boudreau a “moron”.
It was bizarre and unprofessional, and apparently, folks love that kind of thing, because this was our second-most viewed article of the year.

Speaking of bizarre — that’s the third time we’ve used that word to describe our top five stories — the reaction when Travis Hamonic was dealt from the Canucks to the Ottawa Senators was unlike anything we’d seen before.
We saw former players like Marc Methot talk about how he’s heard that Hamonic is a “different bird”.
We heard Frank Seravalli — whom this report came from — say that multiple players reached out to express what a “breath of fresh air” it was to get Hamonic out of the dressing room.
“Even just going back to the weekend,” Seravalli said in a radio hit shortly after the 2022 Trade Deadline. “It’s not a substantial change, but moving out Hamonic and bringing in Dermott, the cap change, the change in the room, like, you know, multiple players have reached out to say just what a breath of fresh air it was after getting rid of Travis Hamonic. This is the first, sort of, step forward for this new management regime, it wasn’t necessarily what everyone wanted it to be, in terms of significant movement, but it also means they weren’t going to back themselves into a corner and make any moves that they didn’t need to.”
Obviously there was a ton of unwanted drama surrounding Hamonic to begin the 2021-22 season, but it’s hard to remember a time when a player left a team and had reports like this come out about them almost immediately after.
It was basically unheard of, which is probably why it was the most-read article of the year here at CanucksArmy.
Tomorrow, we’ll get into the top 25 (with much less background and detail about each story) as we close the book on the year 2022!
Editorials
Recent articles from David Quadrelli