CanucksArmy post game: Pettersson gets on the board but Canucks continue turnover galore in 5-2 loss By Shu Lei Wu
2 years ago
The Vancouver Canucks wrapped up a three-game home series against the visiting Montreal Canadiens on Saturday afternoon, losing 5-2 in the final game and gaining two points out of a possible six throughout the series. The Canucks brought out their home alternate jerseys — the blue and green stick in rink — with the hopes of changing their fortunes tonight, but that wasn’t to be. The team struggled early and often and lost to a structured, fast-paced Canadiens team 5-2.

Following Thursday’s collapse, Travis Green brought in a few changes to spark the lineup, which included the presence of Tyler Myers, who narrowly escaped suspension for his hit on Joel Armia. Alex Edler was available again after missing the last game due to injury, Zack MacEwen drew in for Adam Gaudette, and Jordie Benn replaced Brogan Rafferty on the back-end to inject some veteran presence and stability.
Travis Hamonic remained sidelined with injury, while Jalen Chatfield was also out for tonight’s game after leaving in the early goings on Thursday night with an upper-body injury.
Green’s line mixer from late last game continued into this one. Virtanen got the call to ride shotgun with Pettersson and Miller, while Boeser started the game on Bo Horvat’s line with Tanner Pearson. With Gaudette out, Sutter moved into the third-line center role flanked by Hoglander and MacEwen, and Beagle started between Roussel and Motte to round out the forward lines.
With Joel Armia out after sustaining a concussion from Myers’ controversial hit, the Canadiens recalled Corey Perry from their taxi squad. No other changes were made by Claude Julien, as one might expect coming off of a 7-3 win.
Braden Holtby and Carey Price got the nod between the pipes for a rare afternoon home game in Vancouver.
Here we go!

As with the rest of the series, Canucks fans didn’t have to wait long for excitement. With about 3 minutes elapsed in the first period, Myers found a familiar dance partner in Joel Edmundson (the two had dropped the gloves once before as a Jet and Blue, respectively) as the two squared off over Myers’ controversial hit in the game prior.
The pair were seen conversing during warm-ups, and there was no hesitation once the two found themselves on the ice together. Edmundson connected with a few left swings, while Myers seemed just content to hang in there and ride it out.
The so-called “code” was satisfied, the score was settled, and the bell was answered. Whatever you want to call it, props to Myers for standing up for himself and allowing the game to continue without further extracurricular activity.
If the above clip reminds you of what’s been happening to the Canucks’ defence this season, you’re probably not alone.
Following a shaky looking Canucks powerplay which registered a grand total of zero shots, the Habs drew first blood just after the halfway mark through Nick Suzuki. Brett Kulak, the former Vancouver Giant, gained the Vancouver zone all too easily and centred the puck to Suzuki, who one-timed it past a surprised Braden Holtby. 1-0 Canadiens.
Montreal’s series-long parade to the penalty box continued late in the first, with Corey Perry taking down Sutter to gift the Canucks a second powerplay opportunity. Although a bit scrambly to start, Pettersson was unlucky to strike the crossbar with his patented one-timer.
But just when the powerplay looked to be heating up, Boeser took the team off the powerplay with a slashing penalty to end the period 4-on-4. The Canucks ended the period outshot 11-5 and down 1-0, far from the bounce-back start the coaching staff and fans were envisioning.

After starting the period shorthanded, Jake Virtanen was called on a weak slashing penalty to put the Habs back on the powerplay. Soon after the penalty expired, Toffoli found himself in familiar territory — alone in front of the net — from a Corey Perry feed, but to the relief of all Canucks fans, Toffoli put the puck wide.
With Nick Suzuki in the box for delay of game, the Canucks went on the power play once more, only to turn the puck over in their own zone once more. Jake Evans’ subsequent shot struck the post, but it was Toffoli at the center of things again, having run into Holtby trying to crash the net. Horvat quickly jumped in, and the two found themselves in the box for offsetting minors. The revenge tour continues!
With the Canucks down 1-0 halfway through the game, Green brought out the mixer once more and put the Lotto and Horvat-Pearson-Hoglander lines back together. Shortly after a TV timeout, Juolevi jumped into the play and found himself with lots of room in the high slot, only for his shot to hit the post.
In classic Canucks fashion, the ensuing 2-on-1 rush by the Canadiens the other way found the back of the net through a failed Corey Perry pass, which deflected off Juolevi’s stick and under Holtby. 2-0 Canadiens.
To the Canucks’ credit, the team followed up Montreal’s second goal with a period of sustained pressure, which forced a few nervous moments and strong saves from Carey Price, including this one on Virtanen:
With about 1:30 left in the second, Pettersson blew a tire as the last man back at the offensive blue line, allowing Jesperi Kotkaniemi in on a breakaway before being bailed out by Holtby.

Despite looking like he was fighting the puck early on in the third, Pettersson showed off his hand-eye coordination with a beautiful tip on a Jordie Benn point shot for his first of the year and cut the lead in half. 2-1 Canadiens.
Inspired, the Canucks found their legs and turned up the heat with a dominant shift from the reunited Horvat line. Hoglander showed why the Canucks coaching staff put him on the Horvat line in the first place with an extremely strong shift. After having set up Horvat with a deceptive centering pass, he took matters into his own hands and backhanded a shot past a screened Carey Price to tie the score at 2-2.
After having tied the game, the Canucks seemed to go back to old ways, turning the puck over at the defensive blue line and gifting the Canadiens a 2-on-1. The Habs took full advantage and Brendan Gallagher put a quick shot past Braden Holtby after a close play at the blue line. The Canucks challenged for offsides, but to no avail. The goal stood, and the Canucks were assessed a two-minute delay of game minor.
The Canucks’ penalty kill did their job, and the Canucks went to work in the offensive zone. But rather than shooting at Carey Price, the Canucks instead decided to shoot themselves in the foot in another instance of deja-vu. As the play broke down at the offensive blue line, J.T. Miller tried a risky cross-ice pass that was picked off, resulting in a Jonathan Drouin breakaway and a 4-2 Canadiens lead.
Holtby made his way to the bench with just over 4 minutes left in the third to allow the Canucks to chase their two-goal deficit 6-on-5, but the Canucks struggled to set up any sustained pressure before Joel Edmundson sent a long-range wrister directly into the Canucks’ empty net to make it 5-2 Canadiens. Drouin almost made things worse following a Boeser turnover, only to be stopped by Holtby on another breakaway against the Canucks’ goalie, something that has happened all-too-recently this series.

Gameflow from Canucks vs Montreal January 23, 2021 (courtesy of naturalstattrick.com) 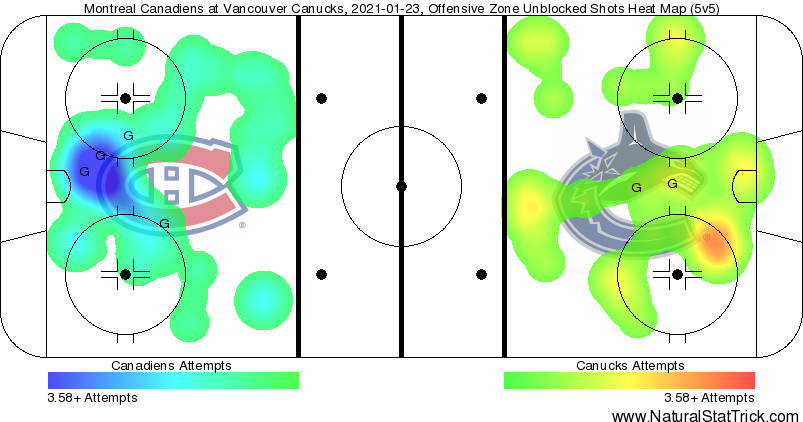 Heatmap from Canucks vs Montreal January 23, 2021 (courtesy of naturalstattrick.com)

Nils Hoglander
Hoglander only played 10:38 in ice time, but he made the most of it with a few very strong shifts that showcased why he made the team and what made him so effective in the SHL. He had a dominating shift in the third period and was rewarded with a nice backhand goal. Beyond Hoglander, however, there weren’t many positives besides the fact that the Canucks don’t have to play the Canadiens again, except for the next six times later this season…

After a poor opening period, the Canucks showed signs of life in the latter half of the second and battled back to tie the game early in the third. However, the home team continued to turn the puck over at a concerningly impressive rate and conceded 5-plus goals in their fourth consecutive game, no doubt feeling the absence of Tanev and Markstrom now more than ever. What’s concerning about the turnovers, however, is that it’s not just the Canucks’ rookies that are making them. Miller, Pettersson, Hughes, Boeser, and Schmidt were all guilty of multiple costly mistakes throughout the series.
Following the loss, the Canucks remain 2nd last in the Canadian division by points and last by points percentage, with the Senators holding two games in hand. And with Ottawa arriving in two days’ time, the Canucks don’t have much turnaround time to adjust and fix their hemorrhaging defence.

The Canucks host the Ottawa Senators for the first of a three-game set at 7:00 pm PST on Monday night.
Uncategorized
Recent articles from Shu Lei Wu