CanucksArmy post game: One and a half scoops of Myers with a dash of Lockwood is the recipe to beat Domingue and the Flames 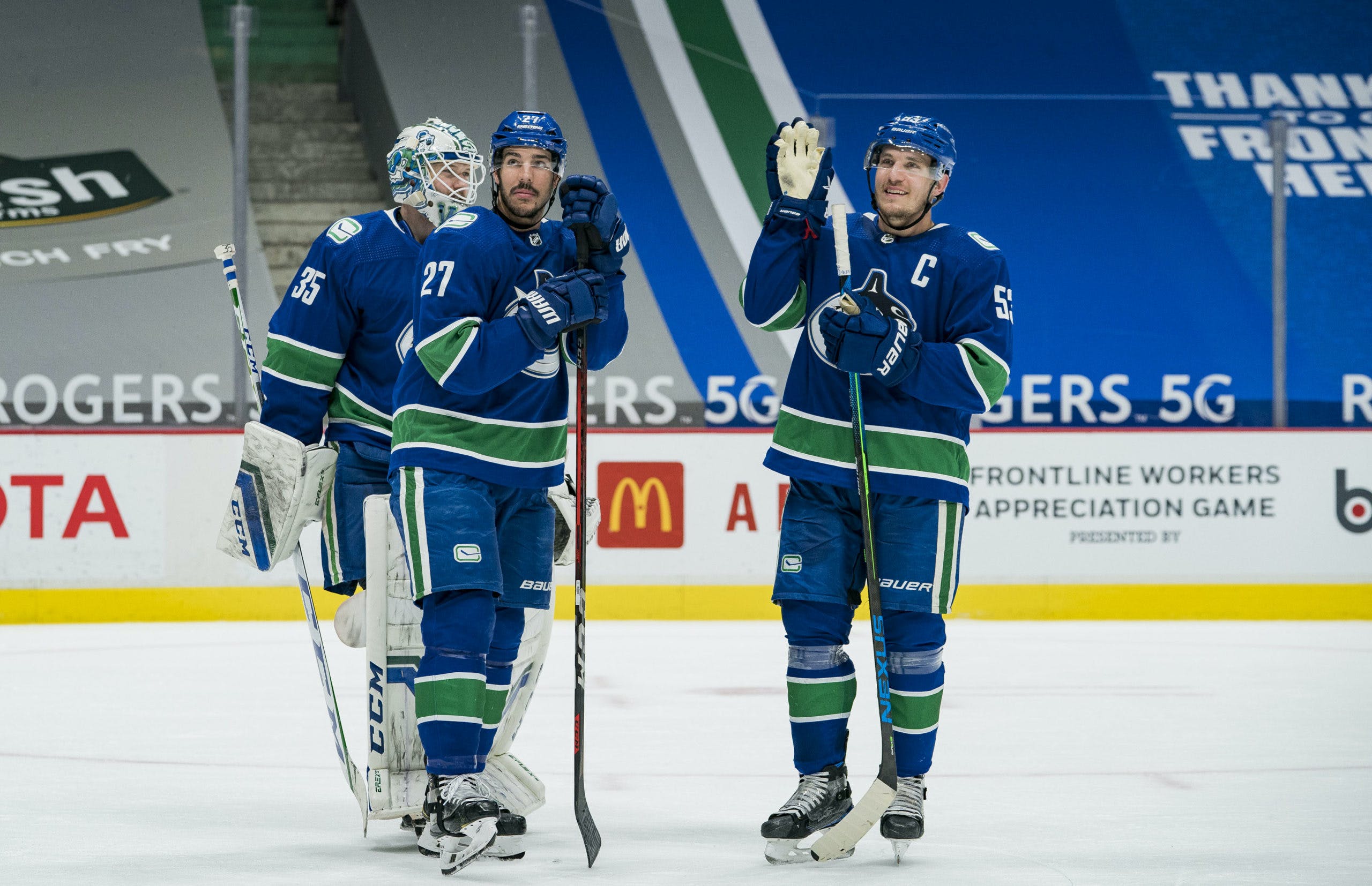 By Faber
1 year ago
It’s the second last game of the season and rumours are flying about the future of this team.
On the back of a solid performance from Thatcher Demko and some timely scoring, the Vancouver Canucks pulled out another win late in the season.
Today is Will Lockwood’s day.
The speedy winger made his NHL debut on a line with Jimmy Vesey and Travis Boyd in an effort to show he can make an impact with the organization moving forward.
Lockwood had a great second half of the season in the AHL and shows a lot of promise with his playstyle and speed on the ice.
Thatcher Demko got the start for the Canucks while the cake boss Louis Domingue was in net for the Flames.

Lock it in! It’s an afternoon affair for the Canucks’ final home game of the 2021 season.
It’s time for puck drop, let’s go!

Both teams were skating well early on even with nothing on the line. Lockwood’s speed was quickly noticeable as he was in on forechecks and did a good job being active on the puck.
Travis Hamonic took an early penalty to give the Flames the first power play of the game just 5:45 into the game.
The Canucks killed off the penalty and the offensive penalty-killing pairing of Tanner Pearson and Bo Horvat have looked very good in their shorthanded roles late in the season.
After taking an early penalty, Hamonic took a pass and came down the middle of the ice and fired a shot far side over Domingue’s blocker. 1-0 Canucks.
Tyler Myers left to the dressing room after taking a bump on his right shoulder/arm area.
At this rate, it appeared as though Alex Edler might end up playing 45 minutes as the Canucks tried and force-feed him his 100th goal.
The Flames were controlling the possession and the shot share but the Canucks were the only team with a goal after 15 minutes of play. Neither team had a ton of scoring chances as they were both skating well on the backcheck and struggling to make consecutive passes in the offensive zone.
Lockwood had another great shift late in the game that ended with Edler coming in and getting a prime scoring chance for his 100th goal. He ended up firing it off the side of the net and stayed at 99.
Myers returned to the game after leaving earlier.
After a couple of good shifts, the Canucks were able to extend their lead when Nils Höglander picked up a loose puck in the slot and moved to the left side of the ice and fired home his 13th goal of the season. 2-0 Canucks.
It was a good day for Höglander:
-Wins the SHL goal of the year award for the third consecutive year.
-Named as the Vancouver Canucks’ Most Exciting Player of the 2021 season.
-Scores his 13th goal of the season in his 55th game.
He is a treat for Canucks fans to have on this roster for years to come.
The Canucks took their two-goal lead into the first intermission. Shots were tied at eight after 20 minutes and we were off to the second frame.

It was a quiet start to the period for both teams, lots of stoppages from icings and offsides sidetracked the momentum that the game was building as the first period finished.
Höglander continued to have a good game as he drew a holding penalty with 12:14 remaining in the period to give the Canucks their first power play of the game.
The Flames had a quick shorthanded two-on-one but Quinn Hughes was able to disrupt the attempted pass and void the scoring chance.
Just as the penalty was coming to an end, Tyler Myers fired a slap shot that beat Domingue on his glove side for what would have been his sixth goal of the season.
It was challenged and was determined that Myers was offside. No goal.
Bo Horvat dropped the gloves for a quick fight with Connor Mackey after Mackey threw a questionable hit on Tanner Pearson.
It wasn’t much of a fight, as just a few punches were thrown.
Horvat was tripped, and with 3:09, the Canucks received their second power play of the period.
Edler took a high-sticking penalty just seconds into the power play to negate the man-advantage. Time for four-on-four.
The penalties expired and we were done with the first 40 minutes of play. The Flames outshot the Canucks 10-7 in the second period but the Canucks held on to their two-goal lead after no scoring in the period.
Let’s go to the third!

Just 2:32 into the period, Lockwood took a tripping penalty to give the Flames their third power play opportunity of the game.
The Canucks were able to kill off the penalty and were back to even-strength.
As the period went on, the game really opened up and that gave Myers another opportunity to put one past Domingue. Myers made a great move in tight to get the puck on his forehand where he ripped a wrist shot into the back of the net. 3-0 Canucks.
The Flames took a delay of game penalty to give the Canucks a power play right after scoring their third goal of the game.
Demko made more big saves in the third period as continued to quietly have another great game, stopping the first 30 shots that he faced.
It should be noted that Arturs Silovs was backing up for this game. It would be fun to see him get a game in tomorrow.
Andrew Mangiapane scored a goal in tight to break Demko’s shutout bid. 3-1 Canucks after the Flames goal.
With exactly one minute left, Matthew Tkachuk scored a goal with the Flames’ net empty to make it 3-2 Canucks.
Brock Boeser was out on the ice late to put the icing on the cake and he did so with a full-ice backhanded empty-net goal to seal it. 4-2 Canucks.
The Flames outshot the Canucks 40-24 but the Canucks ended up with a 4-2 win. 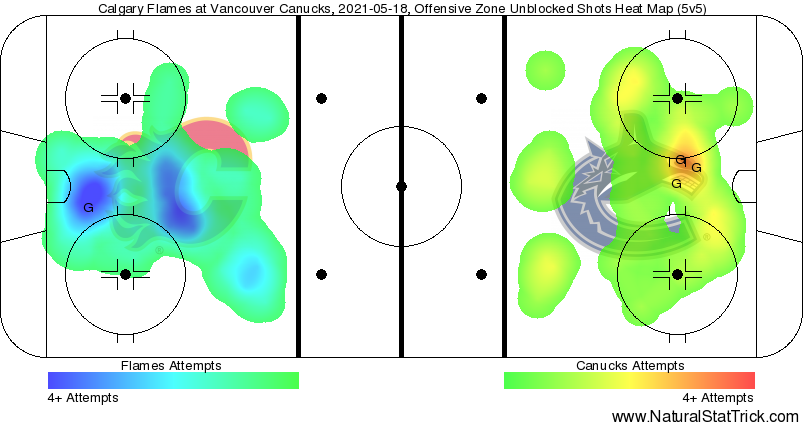 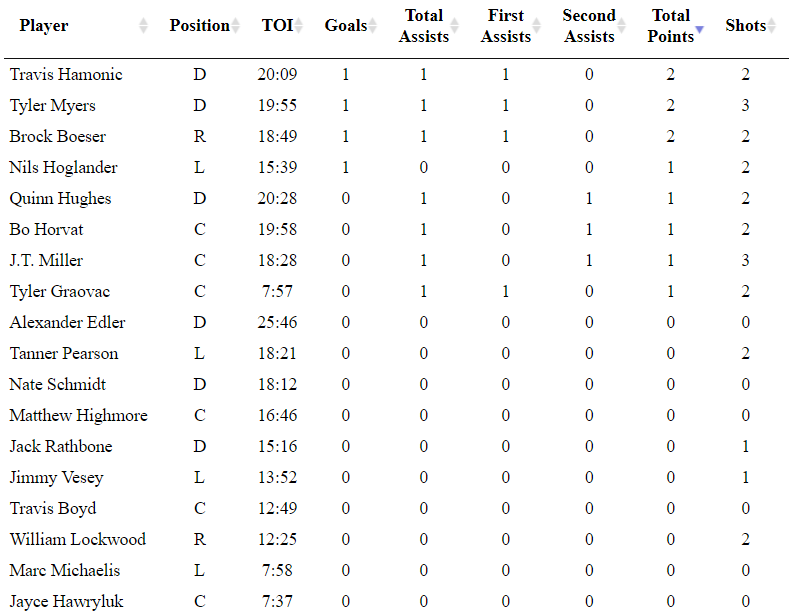 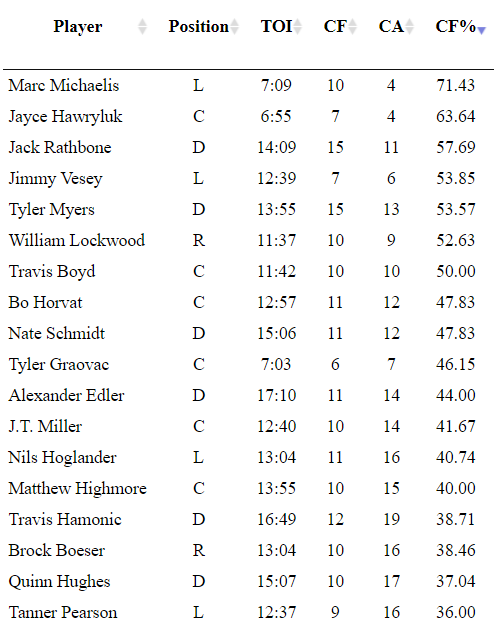 Thatcher Demko: He faced 40 shots and up until the final four minutes of the game, he stopped them all. It was another glimpse into the future that Demko can be one of the best goalies in the league.

Well, this is my final time wrapping up a Canucks game here at CanucksArmy this season. There’s not a lot to talk about from this game. The win puts them in 9th place going into the draft lottery and with a win tomorrow, they could drop down to 10th place.
I’m ready to move on to next season and I’m sure that the players on the ice are saying the same thing.
“If we can make it through a year like this, we can probably make it through anything,” said Demko in the postgame.
He’s right. I don’t think that this team is as bad as their season shows but there is a lot of work to be done to make them into a cup contender. I hope this organization makes the right moves over the next few days.
I want to thank all the readers for the engagement this season. The comment section is always popping off for every postgame and I’ll be excited to do it all again next year with CanucksArmy.
Uncategorized
Recent articles from Faber