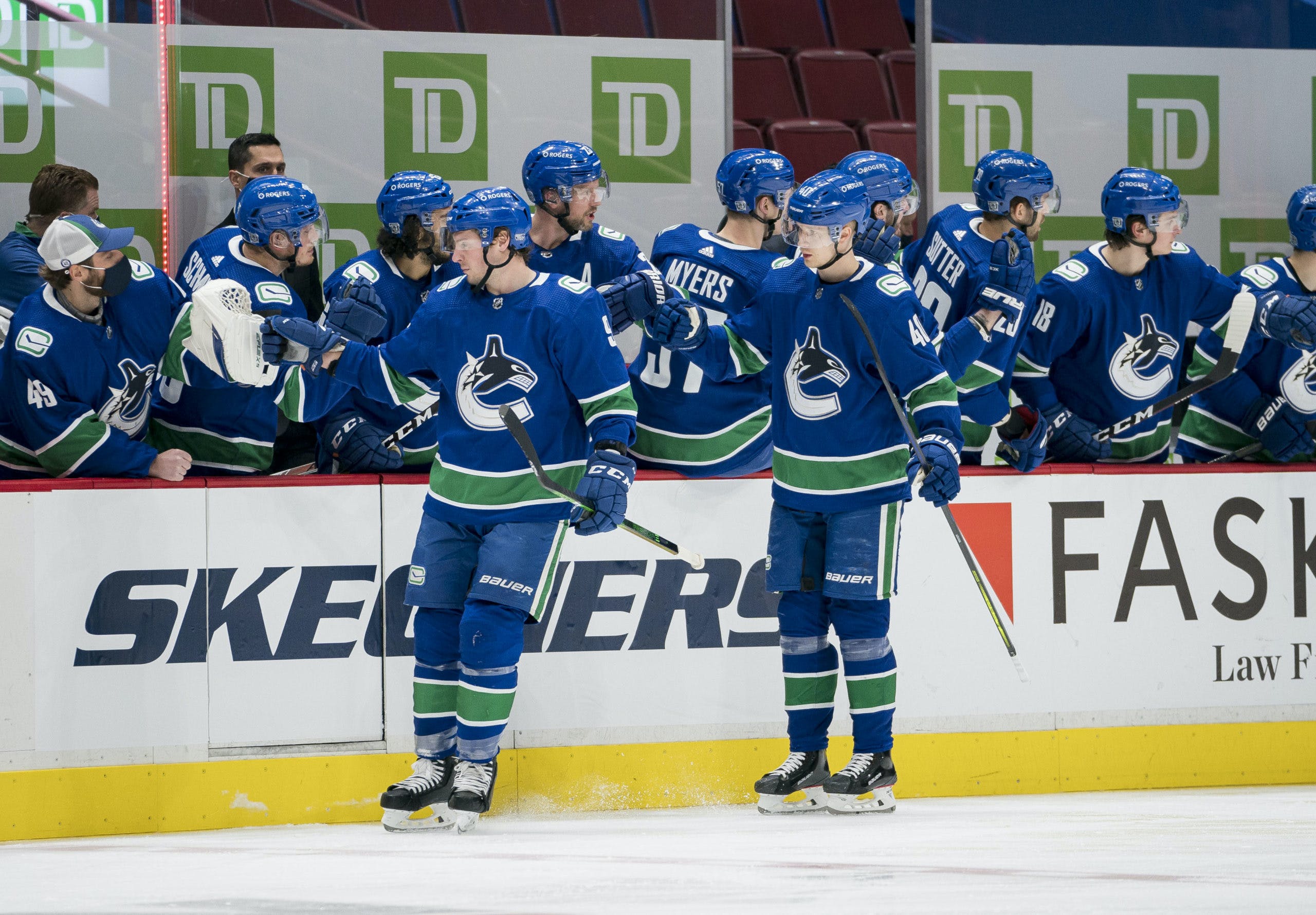 By Faber
2 years ago
After a 7-1 whooping on Monday, the Vancouver Canucks were back in action for game two of a three-game series with the Ottawa Senators.
They kept that pace up into game two as they ran through the Senators with a 5-1 victory. It was a busy game as the teams finished with a total of 78 shots on net. The Canucks’ forwards made the most of their chances while Thatcher Demko made the most of those shots against.
Tonight’s game marked the 9th annual Hockey Talks game. Here’s a six-minute clip of Corey Hirsch talking about Rick Rypien and the ongoing battle that so many of us deal with in regards to our mental health.
The team was suited up in Hockey Talks shirts pregame, and the game would feature a special presentation before puck drop.
Travis Green spoke with the media before the game and said that getting back to practice was a huge boost for some of his players citing that some players don’t even have the puck on their sticks for 20 seconds in a game. A couple of practices helped the players get a feel for the puck and he was confident that his team would be ready for Wednesday night’s game.
There were some changes to the Canucks’ lineup as Jalen Chatfield was in and Olli Juolevi was out.
Juolevi was coming off of Monday’s game that saw him score his first NHL goal and he has been steadily putting in NHL quality play on the back end. As for the forward group, Zack MacEwen was in while Adam Gaudette was once again absent from the ice.
The swap to the defence core that I found most interesting was the new pairing of Nate Schmidt and Tyler Myers. That pairing had played together for 21:21 so far this season and during that time has been on the ice for two goals for and zero against. Schmidt is a versatile player who can play both sides of the ice but I have really liked his game when saddled up with Alex Edler this season. Edler was now partnered with Chatfield and likely would see less time than usual.
It made me question if Green is doing some outside of the box thinking to keep Edler fresh as the Canucks play their first of back-to-backs against this Senators team.

Thatcher Demko was back between the pipes for the Canucks after turning in a great performance on Monday where he stopped 35 of 36 shots. As for the Senators, they went a different direction, calling upon 26-year-old Marcus Hogberg to make his 26th career NHL start.
Hogberg is a big Swedish goalie who possesses a 5-11-9 record to go along with his .900% save percentage and 3.28 goals against average on his career.
The Canucks put a beating on Matt Murray on Monday and it was time to see if they could do the same against Hogberg.
You may remember Hogberg as the goalie in net for the Senators back on January 2, 2019. If that date doesn’t ring a bell, that was the night of Elias Pettersson’s first career hat trick.
Could he do it again?
Let’s go!

The Canucks struck first just 2:06 into the game when Myers jumped into the rush and fired a shot on net that froze in the crease before Tyler Motte buried his fourth goal of the season. 1-0 Canucks.
The Sens brought quite a bit of pressure early on, putting seven shots on Demko in the first three minutes of the game. Both teams were getting extended time in the offensive zone.
During a neutral zone transition, the Canucks drew the first power play of the game with 15:48 remaining in the period. The first unit spent a lot of time moving the puck around and did generate some chances without a goal.
After the penalty expired, Jake Virtanen took a penalty to give the Sens their first power play opportunity of the game.
After a wild scramble in front of the net, Josh Norris found the loose puck and fired the puck past Demko to tie things up. 1-1 after the Sens goal.
The Sens were bringing a lot of pressure as 12 minutes into the game they were outshooting the Canucks by a count of 15-6.
JT Miller took a hooking penalty with 7:21 remaining in the period and the Canucks needed to get back to work on the penalty kill.
The Sens were all over the Canucks in the middle part of the period, they held the Canucks without a shot for a 10 minute stretch of play where they put together 14 straight shots.
The Canucks were back to the penalty kill with 1:45 remaining when Antoine Roussel took a high sticking penalty.
After a 105 second kill, the period came to an end. The Senators had an NHL-wide season high of 24 shots on net in the period. They also had 18 scoring chances.
There was pressure from the Canucks in the first few minutes but the first 20 minutes belonged to the Sens.
Vancouver narrowly escaped with a 1-1 tie on the scoreboard and needed to regroup after a tough 20 minutes.

After killing off the remainder of the penalty, Elias Pettersson started an odd-man rush as he passed it back to Hughes who made a perfect pass to Miller before he buried it in the back of the net. 2-1 Canucks.
The Canucks looked like a much better team in the first five minutes of this period. They were driving the puck through the neutral zone and forcing mistakes from the weaker Sens team.
With the pressure, came more goals.
More Miller goals, to be exact. He came to the net and gathered the loose puck off his own rebound then ripped a shot over Hogberg. 3-1 Canucks.
The Canucks had the Senators chasing in their own end and drew another power play opportunity when Thomas Chabot took a slashing call with 10:49 remaining.
The Sens killed off the penalty but the Canucks kept the pressure going in the period.
The Canucks went to the power play once again later in the game when Pettersson drew a penalty on Chabot. On the power play, Pettersson made the Sens pay.
After over a minute of pressure, Pettersson ripped a wrist shot past his fellow countryman Hogberg. 4-1 Canucks.
After a solid first period from the Senators, the Canucks came through and upped them with an even better period of their own.
The Canucks had 20 shots and 19 scoring chances in the second period. They limited the Senators to only seven shots and two scoring chances.
With a three goal lead, the Canucks just needed to put this game to bed in the final 20 minutes of play.

The period began with some great back-and-forth even strength hockey. Both teams had a lot of energy in the first five minutes and it was closed out by a huge save from Demko.
The Lotto Line began to pour it on in the third period. Jim Hughson said it best on the broadcast when he mentioned that it looked like a power play for that trio at 5-on-5.
With 8:14 remaining, a bouncing puck found its way past Hogberg. It was announced as Tyler Motte’s second goal of the game and fifth of the season. 5-1 Canucks.
The third period gave a lot of ice time to the bottom six but in their limited time, the top-six group controlled a ton of the possession.
The clock bled away and the Canucks put another win in the column. 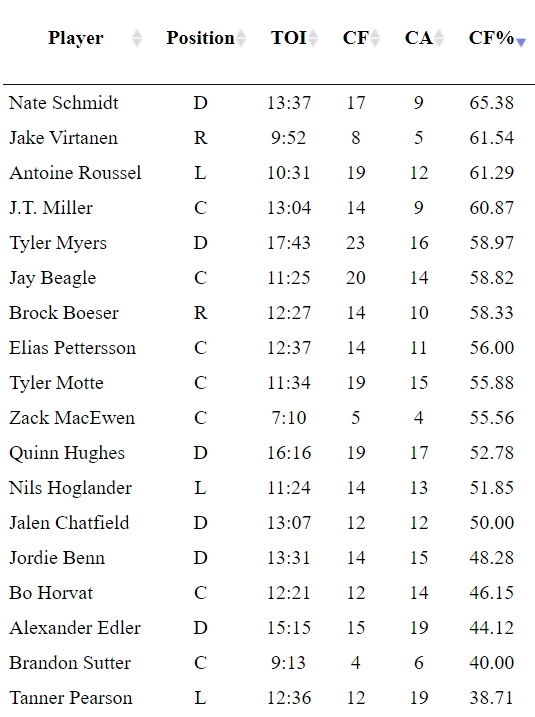 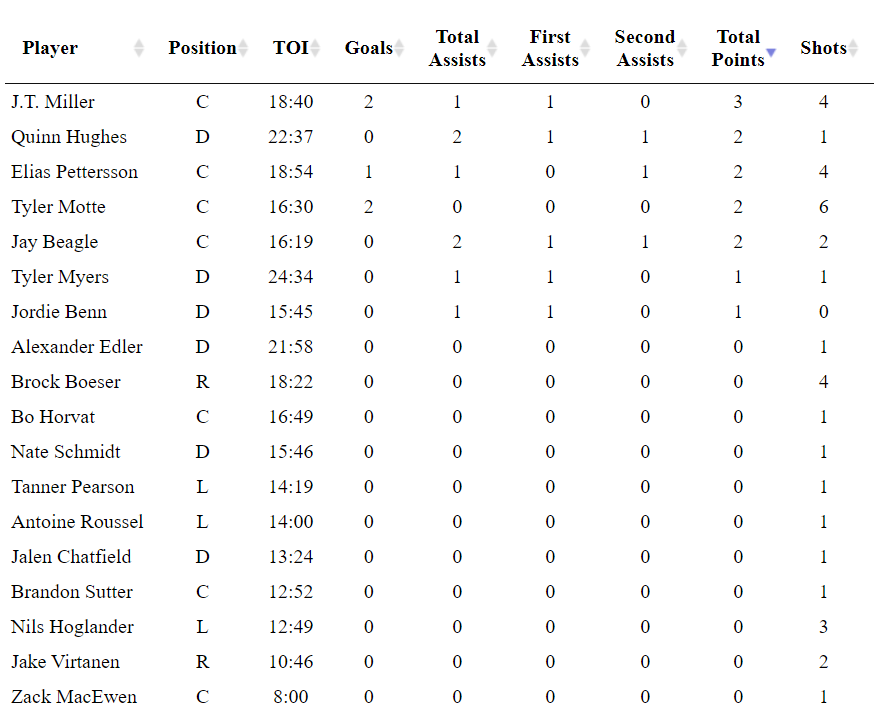 J.T. Miller: Miller had a behemoth of a game, he did take a few penalties but made up for it with two goals of his own along with a primary assist.
Tyler Motte: If you score first, you score last. Motte took Reese Bobby’s famous words and switched them up a bit. Motte had two goals at even strength and controlled a majority of the shots and scoring chances while he was on the ice.
Thatcher Demko: There was a lot of talk about “bubble Demko” being back as he was once again excellent against the Sens. Demko saved 42 of 43 shots faced on Wednesday night. He saw 27 scoring chances against and looked comfortable on every single one.

After a 7-1 win on Monday, the Canucks wrote the second chapter of this series just the way they wanted to. They brought in Jalen Chatfield, who was once again solid. They got bottom-six scoring and The Lotto Line came to life putting up a total of 12 shots and five points between the big three.
This is exactly what the Canucks needed to do against this weak Senators team. After two commanding victories, they should continue to keep their foot on the gas and press to make this a three-game sweep over the Sens.
Fans won’t have to wait long as we are right back to Canucks coverage tomorrow night at the regularly timed 7 pm home start.
Go get your brooms.
Uncategorized
Recent articles from Faber