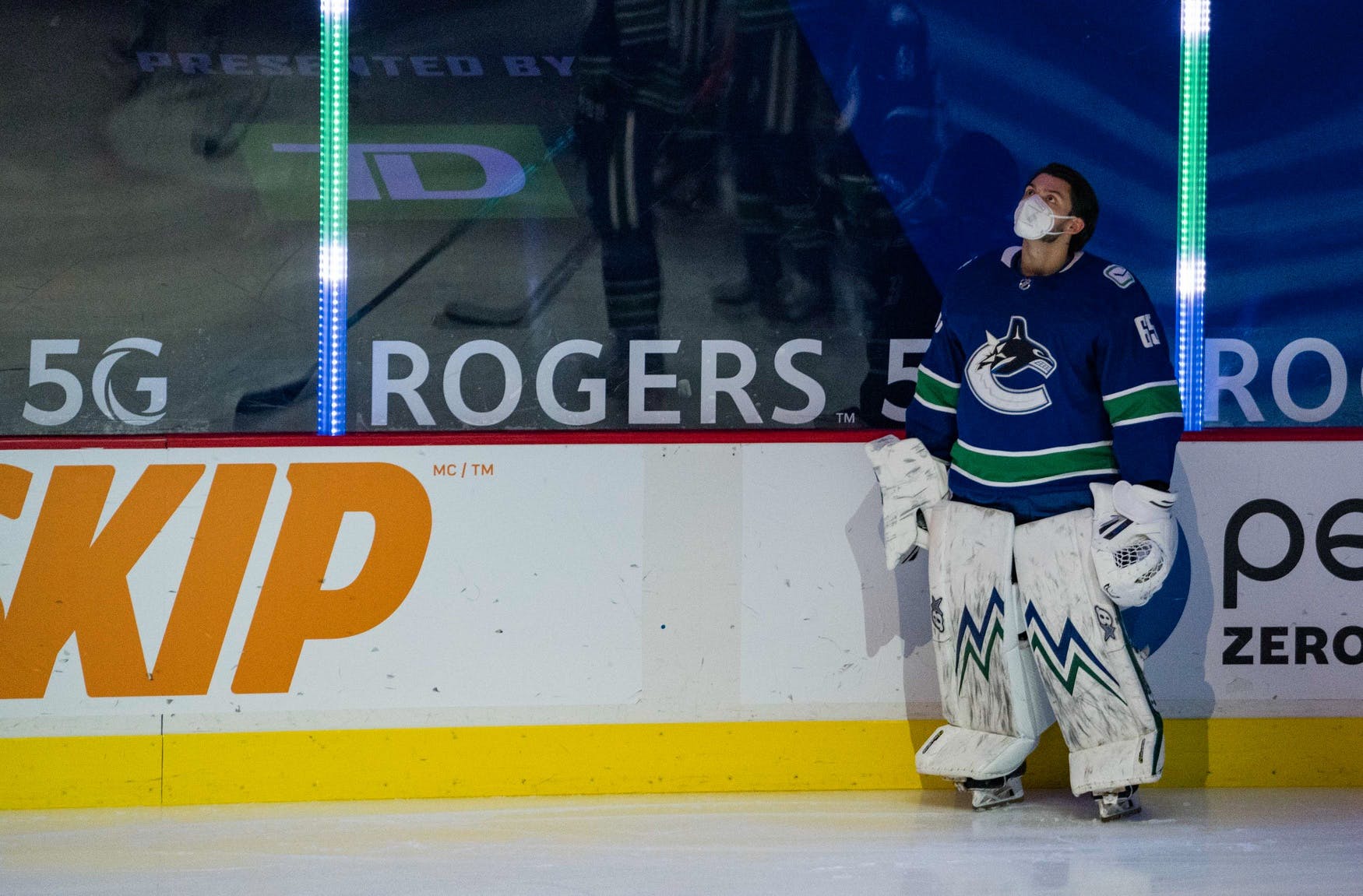 By Faber
1 year ago
It’s been a while since Canucks fans have been able to watch their team play.
Tonight, for the first time in 18 months, the Canucks played a home game in front of their own fans.
In the end, it’s still just a preseason game but the Canucks put together a group that featured a majority of their lineup being NHL players.
Everyone was excited to watch the next rookie up, Vasily Podkolzin, step onto the ice against NHL competition. He skated on a line with J.T. Miller and Conor Garland.
Mikey DiPietro was the starting goalie for the Canucks and Adam Werner was in net for the Flames. Let’s see how the entire lineup shook down for the Canucks.

Currently on a PTO, Alex Chiasson got a good opportunity playing on a line with Bo Horvat and Tanner Pearson. This was a spot where Zack MacEwen played in during training camp but we saw a few changes from camp to this game.
A message was also sent on the backend as Jack Rathbone played alongside Tyler Myers while Olli Juolevi dropped down to the third pairing to play with Jett Woo.
The rink was full with fans and it was time for puck drop.
From the Abbotsford Centre, and for the first postgame report from me in months…
Let’s go!

The first scoring chance of the game came from Podkolzin as he came in on the left wing and attempted to go short side on Werner.
The Canucks went to the power play early on and wasted no time scoring their first goal in front of their home fans. Conor Garland fired a shot from the slot that was blocked. He then followed it up with a second attempt that slid past Werner. 1-0 Canucks.
The only assist on the goal was to Oliver Ekman-Larsson as the new guys looked good in the first few minutes.
With 7:41 remaining, Jonah Gadjovich came down the left wing and made a shifty move to get around a sprawling Juuso Valimaki and then found a streaking Chase Wouters who made no mistake and buried it over Werner’s glove. 2-0 Canucks.
The Canucks were dominating the pace of play through the first 14 minutes of play. It was a quiet start for Mikey DiPietro who’s loudest moments came when a brouhaha ensued in his crease after some pushing and shoving involving Matt Highmore.
The Canucks went back to the power play with 4:42 remaining after Andrew Mangiapane took a cross-checking penalty near the Canucks’ bench.
The Canucks found the back of the net once again as Miller buried a power play goal around the left side of the crease. 3-0 Canucks.
Assists went to Horvat and Chiasson as the Canucks’ power play went two for two in the first period.
Jett Woo took the first Canuck penalty of the game as he was hit for interference during a scramble in DiPietro’s crease.
The Canucks killed off the first 1:19 of the penalty and brought a 3-0 lead into the first intermission.

The Ekman-Larsson and Poolman pairing continued to build on their training camp chemistry. When Ekman-Larsson pinched, Poolman dropped back. The pairing was quickly showing some potential to be alright this season.
Podkolzin didn’t look out of place at all in his first period of NHL competition. He, Garland and Miller spent almost the entirety of their shifts in the offensive zone.
Finally, DiPietro is already a fan favourite in Abbotsford. My editor and goalie enthusiast David Quadrelli was chatting my ear off about his movements in the crease. Quads is right, DiPietro does look much improved to last season and he will end up being the biggest star out here in Abbotsford.

Not a lot happened in the first half of the period. The Flames had a few shots on DiPietro but the Canucks controlled much of the possession once again.
Zack MacEwen was throwing around the body more in the second period as he looked to make enough of an impact to catch the coach’s eye.
The league has made it known that they want to crack down on cross-checking, and Bo Horvat had to find that out the hard way. With 9:01 remaining in the second, the Canucks’ captain took a cross-checking penalty to send the Flames back on the power play.
Then another cross-checking penalty was called, this time Oliver Ekman-Larsson was the culprit. The Flames had a 5-on-3 power play for 24 seconds as a result.
Dillon Dube quickly converted, as he was allowed plenty of room in the slot before loading up a wrister, which found its way through traffic and beat Michael DiPietro blocker side. 3-1 Canucks.
Shortly after, Dube took a holding penalty and sent the Canucks back on the man advantage.
The Canucks’ first unit consisted of Ekman-Larsson at the point with Miller and Garland at the half walls on their weak sides and Horvat and Chiasson in the middle. Chiasson served as the net-front presence.
The Flames managed to kill off the penalty, with the best chance of the two minutes coming with the second unit out. Vasily Podkzolin set up Zack MacEwen on the doorstep with a pass from below the goal line, but MacEwen whiffed on the shot.
Shortly after, the Flames converted and made it 3-2 Canucks heading into the third.

Podkolzin spent time on the second power play unit and had a great set-up that should have been buried by MacEwen.
The more that I see from Chiasson, the more I like. It’s clear that he’s a big body winger but his hands in tight are starting to catch eyes. He is in a spot to be a contributor on the 2021-22 Canucks.

As it was in the second period, it was a quiet first half of the third. A couple notable moments were Rathbone leading a rush with Myers on his side as the three forwards held back.
We saw more physical play from Gadjovich and MacEwen while Chiasson continued to look like a player who can fit in this lineup.
Just as the game was getting a bit dull, Tanner Pearson scored with 6:29 remaining in the period. Oliver Ekman-Larsson drew the only assist on the goal. 4-2 Canucks.
The Flames evened out the pressure quite a bit after their five-on-three power play but the Canucks once again took over the control of play for the final 10 minutes of the game.
Down by two, the Flames pulled their goalie with just under four minutes remaining in the game.
With three minutes remaining, DiPietro made a sprawling save diving from left to right to put a stamp on a great performance in the crease.
As a closing act, DiPietro had the crowd screaming his name while he battled traffic in the crease and was able to make three quick saves in tight before covering up the puck with 23.9 seconds left in the game.
The seconds ticked away and on the back of a solid DiPietro performance, the Canucks skated off the Abbotsford ice with a 4-2 win.

DiPietro was solid in the third period. He slammed the door shut down a possible Flames comeback with his acrobatic saves in the period.
Chiasson and Poolman impressed as they made simple plays look easy and were strong at both ends of the ice.
Poolman looks like a very calming presence on the back end and that will be massive for his partner Ekman-Larsson.
One of Myers or Rathbone needs to stay back. This pairing features two defencemen who deeply want to get involved in the offence at all times. One of these two is going to have to hang back if the other pinches, otherwise, there will be a lot of breakaways going back in the Canucks’ direction.

Mikey DiPietro saved 25 of the 27 shots he faced and held tough in the third period. He was athletic as he usually is but did an excellent job of reacting to the releases of shots. He anticipated every shot with excellence and looks to have taken a massive step from the last time we saw him consistently play games.
OEL-Poolman were great in this game. OEL had a couple of assists and Poolman was as advertised as a defenceman who slows the play down and let’s his partner take the wheel on the pairing.

It was great to see the Canucks play in front of their home fans. The organization had a pregame ceremony featuring locals from the Sumas First Nations community drumming along to a beautiful song.
The Canucks put on a show for their home fans but this was a weak Flames team that they were matched up against. It was great to see the OEL-Poolman pairing work well together. The worries on the back end came from the Rathbone-Myers duo. Rathbone looked good and Myers looked good as well. The problem is going to be them as a pairing, not as individuals. Both can’t be full out diving in to every offensive rush and as the veteran and frankly, worse offensive player — it should probably be Myers staying back.
The line that we all wanted to see skate together played pretty well as a trio. Miller and Garland welcomed Podkolzin into his first match with NHL competition.
“Podkolzin looks mature beyond his years, he looks like a pro,” said Garland. He went on to speak about how important these preseason games can be for a line to develop chemistry.
“It’s huge. I don’t know what the lines will be for game one, but whatever they are, to have three days of camp and now a game with Millsy and Pods is huge. There’s a lot of stuff that we’re figuring out especially at practice. J.T. had some thoughts about places I go that he doesn’t want me to go to and I talked to him about as well so it’s just nice to be able to have that dialogue and get a game and, under our belts tonight.”
The trio looked like a top-six NHL line with how they moved the puck and skated. Each of the three had moments in this game that the Abbotsford crowd couldn’t help but celebrate. They were the best line in this game on either team and it will be interesting to see what happens to the top-six lines when Elias Pettersson finally comes back into the fold.
The Canucks’ next preseason game takes place on Friday as they travel to Calgary. With three days off before that game, we expect to see a better lineup for both the Flames and Canucks.
We will see you on Friday for game three of the preseason!
Uncategorized
Recent articles from Faber