CanucksArmy post game: Demko and Virtanen steal the show in a big 3-1 win over the Toronto Maple Leafs 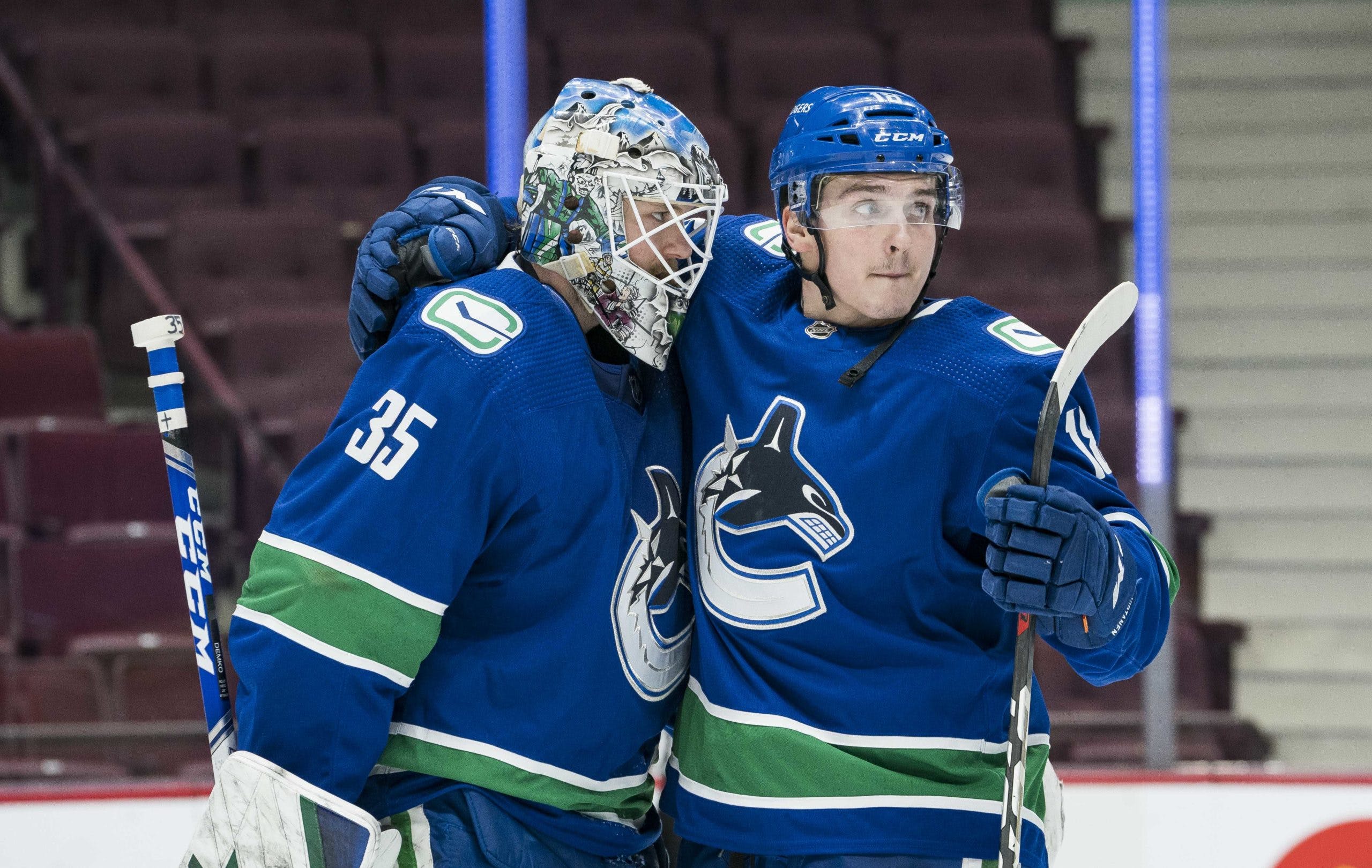 By Faber
1 year ago
The best team in the North Division came to town on Thursday night and the Canucks were without their best player.
Surprisingly, it didn’t matter because Thatcher Demko gave a monstrous performance to go along with Jake Virtanen’s two goals and the Canucks went on to win 3-1.
Let’s see how it all played out.
Elias Pettersson was on the ice for the morning skate but did not remain on the ice for special teams practice. It seems like a minor injury is the culprit for him being absent from the opening game of the two-game set against the Toronto Maple Leafs.
With Pettersson out, Marc Michaelis drew into the lineup for his NHL debut.
Here’s what the projected lines look like going into the tilt.

Thatcher Demko got the start for the Canucks while Michael Hutchinson battled him from the other crease.
The lineup looks much worse without Pettersson in it. With that in mind, the group had a serious uphill battle to overcome against the Leafs.
It’s time for puck drop, let’s go!

The Canucks came out firing and they were rewarded in their first shot of the game. Top-six winger Jake Virtanen flew down the left wing and drove the net with the puck. He flipped the puck over Hutchinson and the Canucks had an early 1-0 lead.
The Leafs fought back after the goal and were sending a lot of outside shots on Demko. It was a quick first half of the period that also featured a “Thank You Manny” video for former coach and player Manny Malhotra.
Even though they were trailing on the scoreboard, the Leafs began to control the game and continually tested Demko as the period continued on.
The first power play came with 5:02 remaining when Alex Edler took a tripping penalty. The Leafs have the best power play in the league and it went to work against the Canucks late in the period.
The Canucks killed off the penalty but the Leafs kept pressing and on their 15th shot of the period, finally beat Demko. Pierre Engvall sliced through the defence and fired a wrist shot past Demko. 1-1 after the Leafs goal.
Each team scored in the period and the Leafs outshot the Canucks 15-7.
Demko was nearly perfect in a period where the ice was tilted towards his net.
Coming out of that period with a 1-1 tie was likely the best and most realistic option for the Canucks as they were severely out-chanced by a count of 13-5.

The Leafs came out with the same energy that they finished the first period with. Demko was earning every cent of his paycheck as the Leafs were all over the Canucks to begin the second period.
The first shift of consistent pressure came from the Canucks’ fourth line as they were able to get a couple of scoring chances and shots on Hutchinson.
They followed that up with some pressure from the Pearson-Horvat-Virtanen line and the Canucks got the pushback that they needed.
Virtanen was having one of his best games of the season and drew a penalty to send the Canucks to their first power play of the game.
The Petterssonless power play gave up a prime scoring chance after a J.T. Miller giveaway. Demko bailed him out with a two-pad stack to make the save off a 2-on-1.
The second unit went to work, and guess who scored for the Canucks…
Get the beers out, because it was the second of the game for Virtanen. He came down the right wing and fired a wrist shot over Hutchinson’s shoulder from a sharp angle. 2-1 Canucks.
The Leafs then received a power play of their own after having five shots on their first attempt. The Canucks were able to kill off another penalty and it felt like the momentum was beginning to swing in their direction.
They continued to push the Leafs late in the period and ultimately took a 2-1 lead into the second intermission.
The Canucks outshot the Leafs 11-10 in the period.

The period was flying by, as the two sides went 7:56 without a whistle and they didn’t actually get a whistle — instead, they got a horn. Bo Horvat scored from his hotspot with assists to Nate Schmidt and Alex Edler. The Canucks were up 3-1 after the Horvat goal.
The Leafs responded with a ton of pressure but Demko didn’t break. He found a groove in the first period and was riding that wave throughout the game.
The third period was flying by with only a few whistles through 15 minutes of play. This was good for the Canucks and their two goal lead.
Demko continued to get better as the game went on. He is starting to look comfortable as an NHL starting goaltender and is putting up the stats to back up that sentiment.
The seconds trickled away and the Leafs pulled their goalie with just over two minutes remaining in the game.
Against all odds, the Canucks snuck out a win from a great goaltending performance. 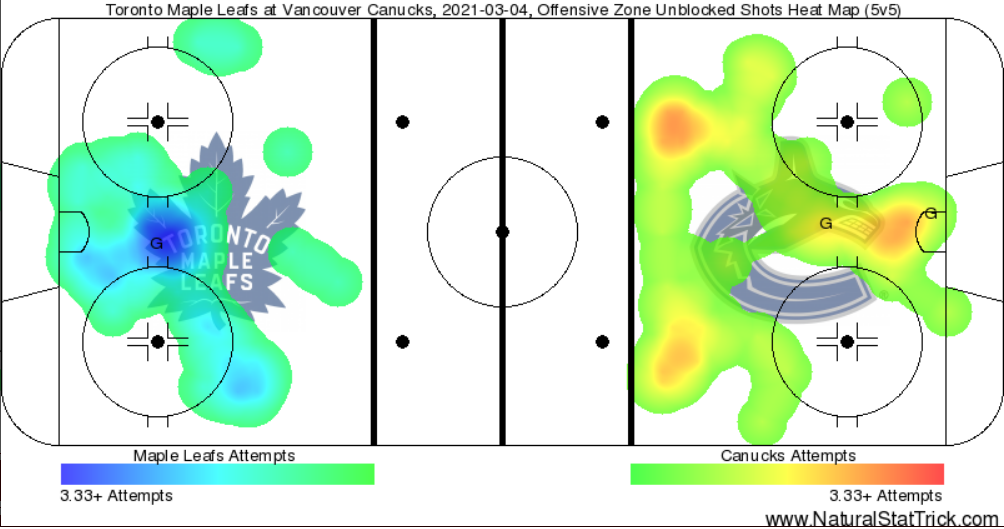 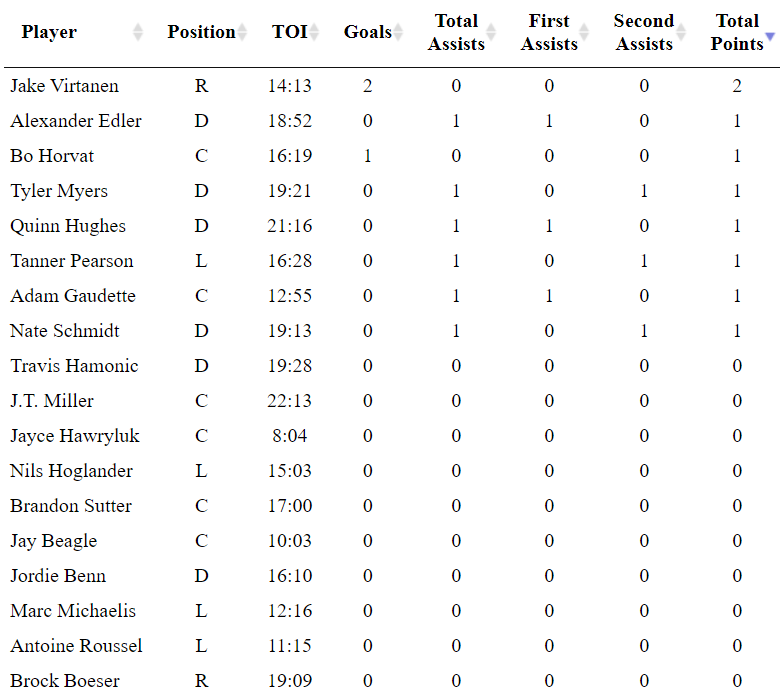 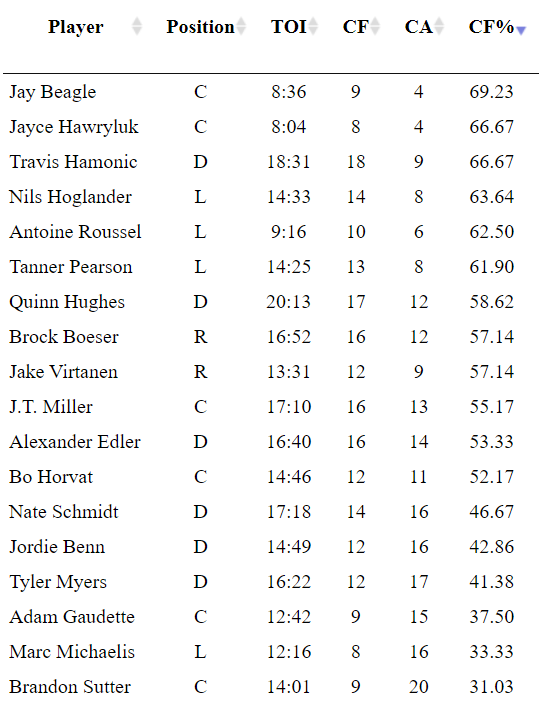 Thursday’s best of Twitter belongs to the #ShotgunJake king, Tommy the Tractor Guy.
A can of corn and a chipped tooth is showing maximum effort with a man at the top of his game.
Tommy followed that up with a tribute to his childhood as he chugged down over a litre of tomato juice.
Godspeed Tommy, godspeed.

Thatcher Demko: It was an elite performance from Demko in Thursday night’s game. He was never out of position, locked in through screens and controlled rebounds all game long. He faced 15 shots in the first period and was dialled in after that. In total, he faced 33 shots and stopped 32 of them. The Leafs had 34 scoring chances and Demko was more than ready for the tough ask to stop them. He was excellent and deserves more and more starts during this hot streak.
Jake Virtanen: It was by far his best game of the season. Two goals, three hits and a 57.1% Corsi for percentage for the game. He has looked better of late and here’s to hoping that he keeps it going through the remainder of the season.

The Canucks probably shouldn’t have won this game. The Leafs were all over them but Demko stole this one from their grasp. You can’t depend on that kind of performance every night but it is a good jolt to the team’s confidence as they truck along this season.
Jim Benning will be speaking to the media on Friday and we will have you covered with wall-to-wall coverage all day long.
Enjoy this win Canucks fans, it’s always just a tad bit sweeter against those Leafs, that’s for sure.
Uncategorized
Recent articles from Faber