CanucksArmy Postgame: The Vancouver Canucks’ next game is on Saturday 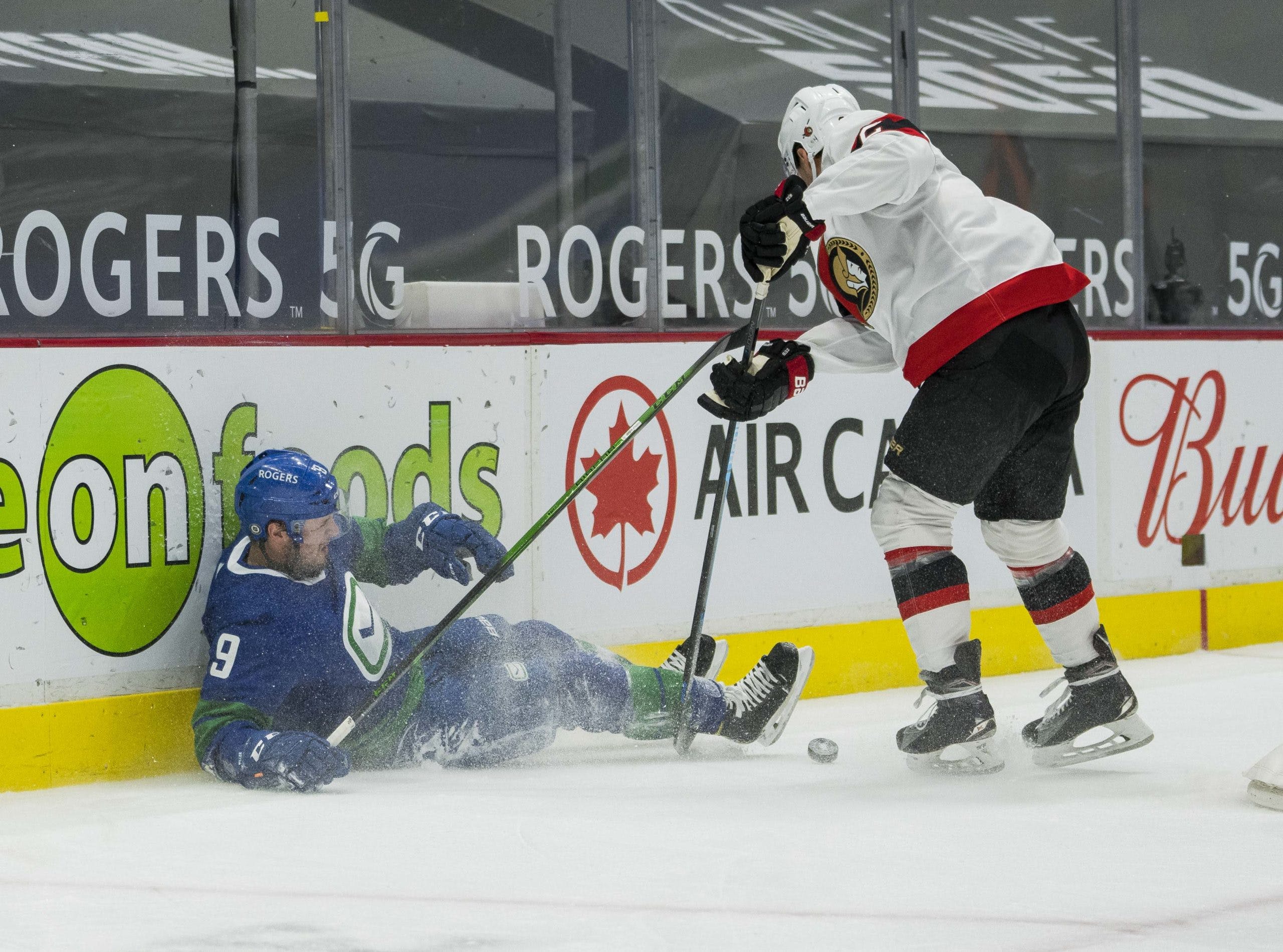 By Faber
1 year ago
I won’t be mad if you just skip this one. The Vancouver Canucks fell 2-0 to the Ottawa Senators and there are no highlights in this article.
After two big wins against the Toronto Maple Leafs in their return from COVID-19, the Canucks continued their homestand against the Ottawa Senators.
Early Thursday afternoon, Travis Green confirmed that Antoine Roussel will be out for a couple of weeks after sustaining an injury in Tuesday night’s matchup against the Leafs.
With Roussel’s injury, it meant that it was time for Marc Michaelis to draw back into the lineup and play left wing on the third line.
Thursday’s game marked the return for Thatcher Demko after Braden Holtby played two great games in the Canucks’ past two games.
At the other end of the ice, the Sens went with Matt Murray between the pipes.
Let’s take a look at how the Canucks put together their lineup.

Matthew Highmore was set to skate in the top six, let’s see how that experiment goes for this Canucks team.
Let’s not waste any more time, it’s time for puck drop. Let’s go!

The game began with some good back and forth pace. Jimmy Vesey had a scoring chance early on when he found a loose puck just outside of the crease but couldn’t bury it.
I’ve liked the look of Travis Boyd and Jake Virtanen’s fourth line and the addition of Vesey gives them another fourth line player who can contribute offensively.
Brady Tkachuk threw a late hit on Highmore early in the game and Travis Hamonic immediately came to his aide to drop the gloves against Tkachuk. It was a pretty uneventful fight after what could have been a dangerous hit. Hamonic was given an extra two minutes for instigating and negated a delayed penalty that was coming for Tkachuk on the play.
In the arena, it was announced that Hamonic received a game misconduct to go along with his penalties.
Just after the fight, the best name in hockey, Artem Zub, took a hooking penalty and sent the Canucks to their first power play of the game just 5:42 into the period.
The Canucks took their first penalty of the game when Highmore slashed a Sens stick in half. The Sens capitalized when Tim Stützle tipped in a shot from the point. 1-0 Sens.
Quinn Hughes was next to go to the penalty box when he took an interference penalty with 8:08 remaining in the period.
The Canucks killed off the Hughes penalty but Virtanen took a high sticking penalty just a minute after the kill and the Canucks were back to being shorthanded.
Highmore was out killing penalties alongside Brandon Sutter on this kill. We all wondered if this was a spot where Highmore was going to slot in on this Canucks roster after not killing many penalties back in Chicago.
Tyler Myers whiffed on a puck in front of the crease and Drake Batherson ripped a wrist shot from five feet out and buried the Sens’ second power play goal of the period. 2-0 Sens.
The Sens had three power plays compared to the Canucks’ one but even at even-strength, the Sens controlled most of the offensive possession time. They ended up outshooting the Canucks 11-7 in the first period.
With Hamonic unavailable for most of the period due to his misconduct, Tyler Myers skated for 10:45 in the period as the leading man for ice time.
The Canucks trailed 2-0 as we moved on to the second stanza.

One minute into the period, Tkachuk took a high-sticking penalty and the Canucks went to work on their second power play of the game after not registering a shot in their first attempt.
They were unable to score but got another chance at the halfway point of the period when Highmore was cross-checked in the back.
The Canucks finally got their first shots on during a power play. Bo Horvat was set up in his bumper position for a couple of one-timers but couldn’t get anything past Murray on the entirety of the power play.
The Canucks were beginning to swing the momentum in the right direction through the period but Murray was up to the task and was making saves on good scoring chances.
The Canucks continued to pressure the Sens throughout the latter parts of the second period. They weren’t necessarily getting a ton of can’t miss chances but they were putting on enough pressure to deserve a goal or two.
With execution looking like a bit of a problem for the Canucks, Travis Green decided to pull out his blender and mix all of the lines up late in the period.
The Sens brought some even-strength pressure late but a second 20 minutes did not change the score from the first 20 and the Sens led 2-0 heading into the third period.
The Canucks outshot the Sens 12-7 in the second period.

The Canucks drew an early power play in the third period when Nate Schmidt was tripped just 70 seconds into the period.
Trailing by two goals, the Canucks needed to get something going on their fourth power play of the game.
They had a few good shot attempts but the Sens were able to kill off their fourth straight penalty.
With their 2-0 lead, the Sens went into full defence mode. The Canucks were able to spend a lot of time in the offensive zone but through the first seven minutes of the period, they were unable to solve Murray.
Green decided to throw together Miller, Horvat and Boeser to be the line that saw a ton of ice time in the period. They spent a ton of time in the offensive zone.
Horvat took a slashing penalty with 11:20 remaining in the period and the Canucks had to play shorthanded as they were beginning to make their final push in this game. They did an excellent job of keeping the Sens out of their zone and easily killed off the penalty.
As time winded down, the Canucks fired a lot of shots on net from the point. They were getting low-danger chances but just weren’t able to tie together enough good passes to get Murray to open up.
Demko went to the bench with just over three minutes remaining for a final 6-on-5 push.
Connor Brown hit the empty net with 90 seconds left in the game. 3-0 Sens. 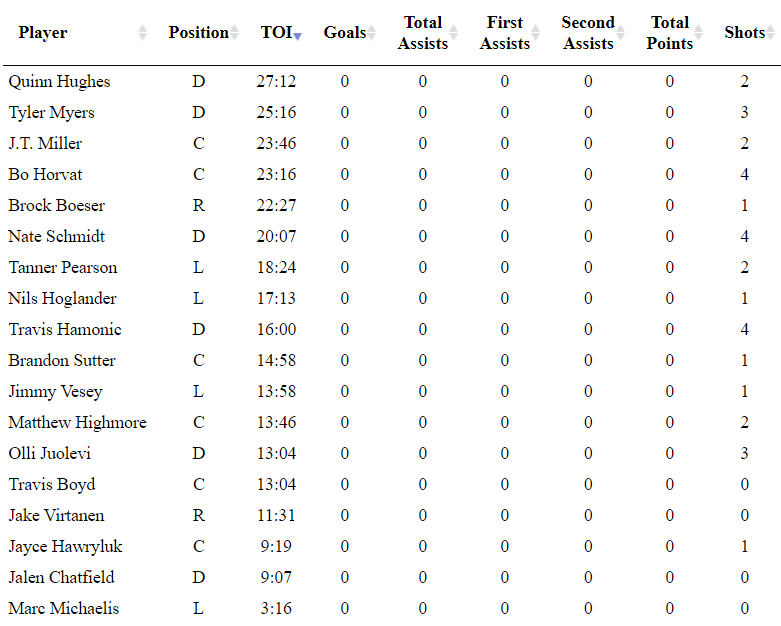 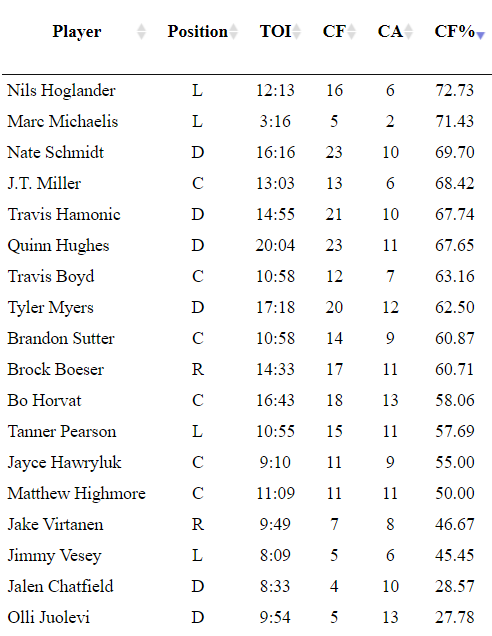 Nils Höglander: He bounced around on multiple different lines and finished the game with a 72.73% Corsi for percentage. There’s not a lot to work with tonight.

Simply put, the game was very boring at even strength. Heck, it wasn’t great on special teams either but the Sens were able to get two power play goals in the first period and that was enough to get the win in a game where the Canucks couldn’t generate enough high-danger chances.
The Canucks play their next game on Saturday against the Ottawa Senators, and they will be better then.
Uncategorized
Recent articles from Faber