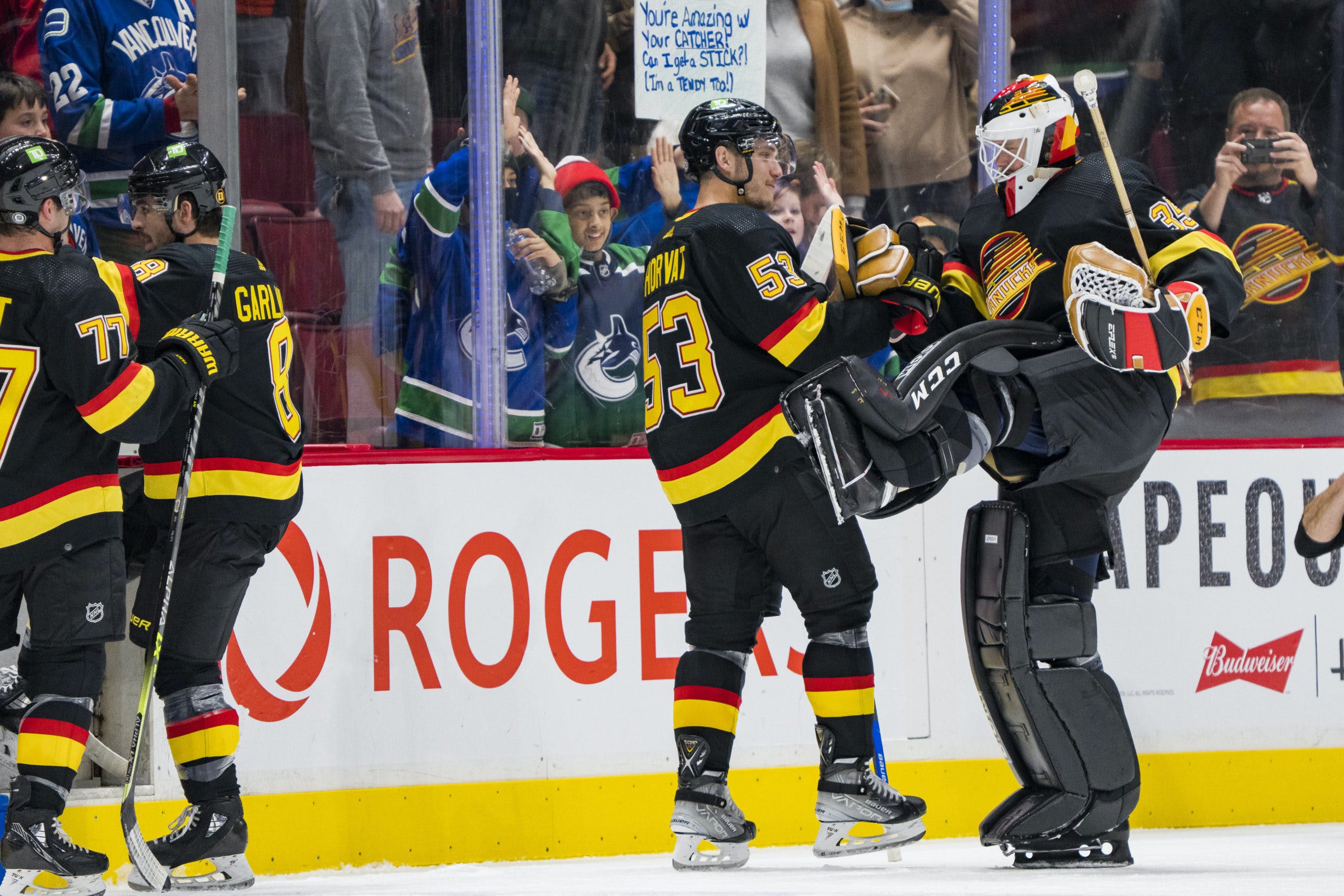 By David Quadrelli
11 months ago
The Vancouver Canucks played a game tonight, and it was a fun one.
Let’s just get right into this.

Here’s how the Canucks lined up against the red-hot — no pun intended — Calgary Flames.
Thatcher Demko vs. Jacob Markstrom. Back in Black by ACDC playing through the loudspeakers. The remnants of a light dusting of snow still present around the rink. Thursday night hockey. Let’s do this!

The Flames came out flying and had the Canucks on their heels early, but the Canucks were able to answer back before the Flames caught them with their pants down, as so many teams have done already this season in the early goings of a game.
The Pettersson line created an early opportunity when Nils Höglander received a great pass from Elias Pettersson and found himself in alone on Markstrom but couldn’t find the back of the net.
Matthew Tkachuk took a slashing penalty nine minutes into the first and the Canucks were given the first power play of the game.
They failed to even get set up and the power play went by the wayside with the Flames even getting a breakaway opportunity after Pettersson bobbled the puck at the blue line.
Thankfully, Demko, in his absolutely glorious-looking setup, was there to shut the door.
After the penalty expired, Pettersson and Höglander worked to set up their other linemate, Vasily Podkolzin, for a chance in tight to Markstom’s right.
The Flames goaltender stood tall and this one remained scoreless.
Just for good measure, Demko stopped his second breakaway of the game before the first period had even expired yet — this time denying Andrew Mangiapane.
Early on, this one appeared to be a battle of the goaltenders. Demko vs. Markstrom. Apprentice vs. former teacher — who will prevail? Let’s find out!

The period started with a Matthew Tkachuk chance that Demko turned away with the confidence you’d expect of somebody wearing Kirk McLean’s old pads.
Travis Hamonic, who did well to pinch on the play, drew a holding penalty from Blake Coleman, to send the Canucks on their second power play of the night.
Again, the Canucks’ power play struggled just to get set up against the Flames penalty kill.
But once they did get set up, Elias Pettersson did his thing.
How about another look?
The pass from Quinn Hughes, the confidence displayed during the whole sequence.
Folks, Elias Pettersson is back, and it is glorious. 1-0 Canucks.
Pettersson had another chance on his next shift when he broke in on the right side and tried to beat Markstrom far side.
Erik Gudbranson upended Jason Dickinson into the end boards. Dickinson left the game and did not return.
“I didn’t think it was it was anything bad or anything,” said Boudreau of the hit post game. “I just think he hit the boards wrong way and that caused the injury.”
Boudreau added that Dickinson will go for screening tomorrow and be re-evaluated then.
Demko lost his goal stick and made the coolest glove save a Canucks goaltender has made in years as a result.
Sure, wearing the skate full time is likely overkill, but holy moly do these jerseys make everything the Canucks do a whole lot cooler.
Sean Monahan took a high-sticking penalty with just over ten minutes remaining in the second and sent the Canucks to the power play once again.
This time, it was J.T. Miller who did his thing.
Miller got the puck along the wall, corralled the puck, and beat Markstrom with a perfect wrist shot.
And when we say perfect, we mean perfect. 2-0 Canucks.
Then the Canucks kept coming.
This time it was Motte leading the charge. The Canuck winger broke in on the rush and had a shot off on Markstrom. Noah Hanifin then poked the puck into the middle of the slot, where it was scooped up by Bo Horvat, who roofed it on Markstrom. 3-0 Canucks.
Demko, who was absolutely otherworldly up to this point, kept up his thing when the Flames broke in with another cross-crease one timed chance.
Blake Coleman took a tripping penalty with just over two minutes to go after yet another extended shift where Elias Pettersson held extended zone time,
Pettersson got another strong one timer that Markstrom just got a piece of to redirect into the crossbar.
That was yet another slapper from Pettersson that was labelled for the top corner, and if it’s not Markstrom in net, it’s probably in, too.
Funny enough, the Flames were forced to put another goaltender in net, as Markstrom’s skate blade came off and was beyond repair.
Dan Vladar took the crease and the Canucks’ power play took advantage. It was Horvat again who scored his second goal of the night to make it 4-0 Canucks.
But we weren’t done there because this period had something of EVERYTHING folks.
Rasmus Andersson closed his hand on the puck and the Canucks were awarded a penalty shot. After the Canucks converged at the bench, the discussion was short as to who would take the shot.
Almost immediately, Bruce Boudreau pointed to J.T. Miller.
And what a good call that turned out to be.
5-0 Canucks heading into the third.

The period began with the Flames appearing to score a goal, but it was waved off immediately due to Elias Lindholm incidentally pushing Thatcher Demko out of the net.
Conor Garland scored off of a Tanner Pearson-created rebound to make it 6-0 Canucks on the Canucks’ 30th shot of the night.
Travis Hamonic took a holding penalty with 13 and a half minutes to go.
All the Canucks had to do was just hang on against one of the best teams in the league.
Elias Pettersson — who, if you hadn’t heard already is back — was out on the penalty kill and squashed a Calgary zone entry. He went the other way and absolutely sniped a shot top shelf on Vladar to make it 7-0 Canucks.
Dillon Dube high-sticked Tyler Myers and the Canucks’ power play went back to work.
This time, they tried some new looks as this one was basically over. Juho Lammikko, Tyler Motte, and Tyler Myers all got some power play time as time dwindled down.
Milan Lucic took a hooking penalty with just over five minutes to go, and the Canucks once again sent out their third — maybe even their fourth — power play unit.
Andrew Mangiapane scored a goal to break the shutout and make it 7-1 Flames.
There was a scrum toward the end of the game that resulted in Thatcher Demko grabbing a hold of Rasmus Andersson and yanking him out of the scrum by the collar.
This served as a great metaphor for how Demko handled the Flames tonight.
Tonight, it was Thatcher Demko’s world, and the Flames were just living in it.
7-1 final. 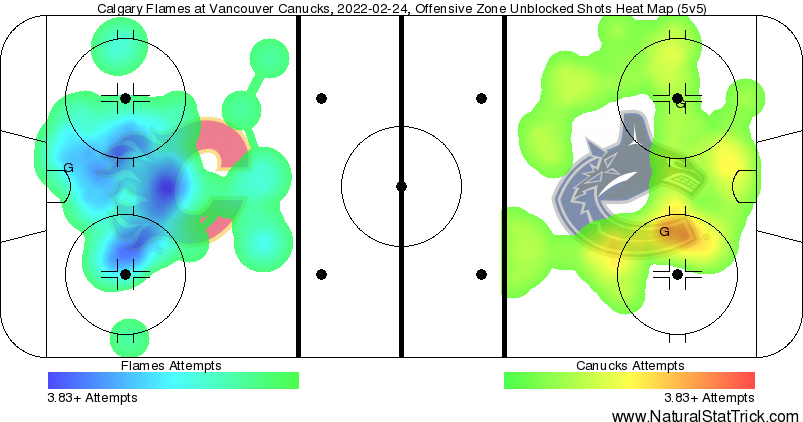 The Canucks looked like an entirely different team in the second period than the one they’ve looked like as of late.
They capitalized on their chances in a way fans just aren’t accustomed to seeing from them this season, and it was a welcome change of pace.
Pittsburgh Steelers wide receiver and Abbotsford native Chase Claypool was in attendance at the game tonight, and during a stoppage in play, was introduced by the in-arena host. Claypool took the mic and said “7-0 is a touchdown score and I just wanted to say, the Calgary Flames suck sooooo bad.” The Rogers Arena faithful then erupted into a “Calgary sucks!” chant.
Suffice it to say, tonight was fun folks.
The Canucks have a road trip coming up, and it’s make or break time for them.
“I think it’s everything,” said J.T. Miller about the road trip. “This is a road trip here where if we play well we’re right in it. Like we’re full-on in the playoff picture and we’re trending. We’ve been trending that way for a while now, but I think a game like that — it’s everything. We should know how we need to play now. Anything less, that’s not good enough, and we need to hold each other accountable to the standard and use this game as a little platform to always kind of fall back on… We just got to worry about ourselves, take it game by game. It’s gonna be a hard road trip for us, a good test to see what we’re made of right now. Hopefully in a week or so, we’re in a really good position.”
The Canucks will take on the Rangers Sunday afternoon to kick off their mammoth of a road trip. Their next home game will be March 9th against the Montreal Canadiens.
Here’s hoping at least half the games are as fun as this one was from here on out.
Uncategorized
Recent articles from David Quadrelli