CanucksArmy post game: Travis Green believes the team looked slow in a 4-1 loss to the Penguins 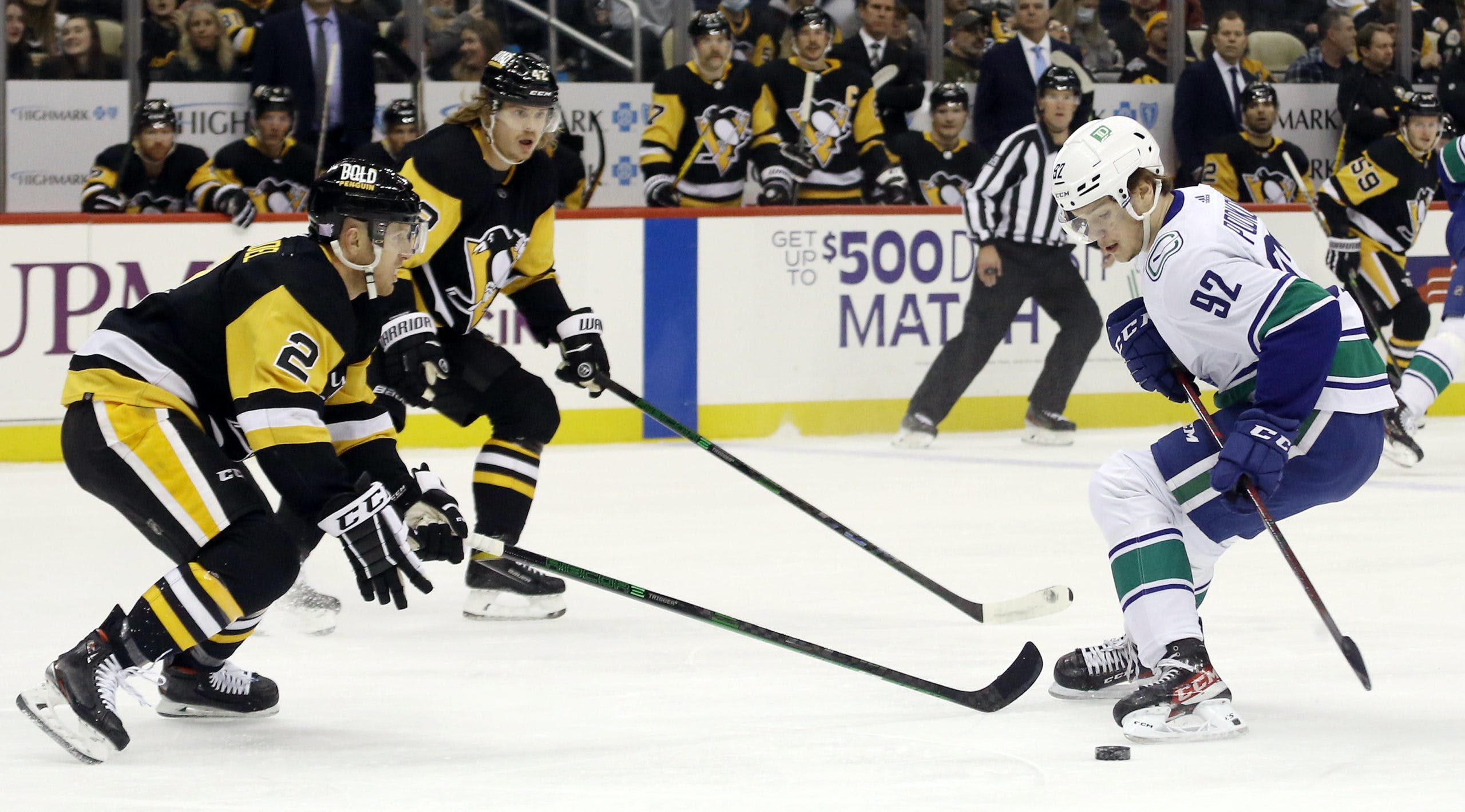 By Faber
1 year ago
The Vancouver Canucks began an uber-important five-game road trip on Wednesday evening as they faced off against the Pittsburgh Penguins.
Unfortunately, the Canucks were not good enough on Wednesday night and lost 4-1 to the Pittsburgh Penguins. They were a step behind and Travis Green said his team was simply “not fast enough,” in the game.
The Canucks came into Wednesday’s affair with only three wins in their last 13 games and need to scavenge together seven or eight points on this five-game road trip to give themselves hope of talking about playing meaningful games in the new year.
The Pens have had a rocky start to their season but now have a healthy Sidney Crosby and are coming off of sweeping a three-game trip through Canada where they allowed just one goal in 180 minutes of hockey. Surrey’s own, Tristan Jarry had an excellent week for the Pens and was looking to build on that with a matchup against the Canucks.
Thatcher Demko got the call to the crease from Travis Green while the aforementioned Jarry was given the start for the Pens.

The trio of Nils Höglander, Bo Horvat and Tanner Pearson was dismantled as Tyler Motte jumped up to play with the duo of Pearson and Horvat. Höglander slid down to play with J.T. Miller and Brock Boeser in an attempt to spark Boeser’s offence. Boeser has been held off the scoresheet throughout the past six games even with him averaging 18:17 of ice time over that six-game stretch.
The line with the most exciting potential had to be the trio of Conor Garland, Elias Pettersson and Vasily Podkolzin. Garland and Podkolzin have been excellent as a winger duo and Canucks fans far and wide hoped that using the duo to surround Pettersson may be a key to getting his game back on track to the high-scoring centre that he proved to be in previous seasons of his NHL career.
It was a 4 PM start here on the west coast, so it’s already time for puck drop.
Let’s go!

Jason Dickinson took a tripping penalty early in the period when he put his leg out at his own blue line. Dickinson’s penalty set up the battle between the league’s worst penalty kill and the league’s worst power play.
Miller had a steal in the neutral zone that lead to a breakaway, where he was caught from behind after attempting a move. He jammed away at the puck in the crease but could not get it past Jarry. The Canucks killed off the penalty and were back to even-strength.
The Pens built up momentum and rode it into five-on-five. They were outshooting the Canucks by a count of 11-3 at the halfway point of the period. The Canucks looked to be getting their chances as the Pens had a few bad turnovers in the neutral zone. Though the Canucks were forcing turnovers, they weren’t able to have extended time in the offensive zone. The Pens were able to control the puck in the Canucks’ zone and Demko had to be very good in the opening 10 minutes of the game.
Horvat took a slashing penalty with 8:24 remaining in the period to give the Pens their second power play attempt.
There were coincidental minors that sent the game into four-on-four with 6:01 remaining in the period.
Late in the period, Kyle Burroughs took a hooking penalty that gave the Pens eight seconds to work with the man advantage. Nothing amounted from the eight seconds of five-on-four action and the teams went to the first intermission with a scoreless draw.

The Canucks were able to get some quality chances in the period and had a couple of shifts that saw a couple of extended possessions in the offensive zone. They took four penalties (one was coincidental minors) in the period and that gave the Pens a chance to build a lot of momentum throughout 20 minutes.
Demko was tested early and often, and he held the Canucks in the game through the period. The Penguins had 16 shots, which included 13 scoring chances on Demko, who stopped all of them.
The Pens attempted 28 shots in total and both Tucker Poolman and Motte had two blocked shots in the period.

The Pens came through in the battle of the bad as they set up in the offensive zone and scored on the power play just 49 seconds into the period. Brandon Rust ripped a shot from the left side after some good passing with the man advantage. 1-0 Pens.
It took the Pens 22:53 to get 20 shots on Demko, who is showing to be worth every cent if that five million dollar cap hit.
Quinn Hughes passed a puck cross-ice to nobody in his own zone. Evan Rodrigues picked the puck up on the left side, had time to walk in and used Tyler Myers as a screen while he ripped a shot into the far corner past Demko. 2-0 Pens.
For the fourth time in a row, the Pens went to the power play when Juho Lammikko took a high-sticking penalty with 7:28 remaining in the period.
Once the penalty expired, it looked like the Canucks were going to build some momentum but the Pens came down for a three-on-one and Zach Aston-Reese ripped a shot past Demko from the left side. 3-0 Pens.
The seconds ticked away and the Canucks went into the second intermission trailing by three goals against the hottest goaltender in the league.

Well, the Penguins scored three goals in the period and had 24 scoring chances through 40 minutes. The Canucks had bad giveaways in the period that led to goals against. The Höglander-Miller-Boeser line was going and Boeser had a quality scoring chance in the period but the team as a whole looked slow, tired and honestly, looked like they didn’t care about losing. It’s no fun covering this team when things are going like this. Let’s hope for some sort of entertainment in the third period.

It was a hot start for the Penguins as they held possession for the opening two minutes of the period and Sidney Crosby had the best chance when he fired a shot off the post. After the Pens’ pressure, the Canucks went back with some offensive zone possession of their own and drew their first power play of the game.
Garland turned the puck over and gave Teddy Blueger a breakaway opportunity in which Demko made a save and covered the puck.
No shots were fired by the Canucks on the power play as the Pens’ penalty kill lived up to their league-leading numbers.
Even with the power play, it took the Canucks 10 minutes to get a shot in the third period.
There was a sign of life with 5:08 remaining. Horvat put his head down, drove the net from the left side, and made a move to the backhand and roofed it over Jarry. 3-1 Pens after the Horvat goal.
Demko went to the bench with three minutes remaining in the game and the Canucks went to work with six attackers.
Brock McGinn shot the puck into the empty net with one minute remaining in the period. 4-1 Pens.
That’s all she wrote. The Canucks lose 4-1. 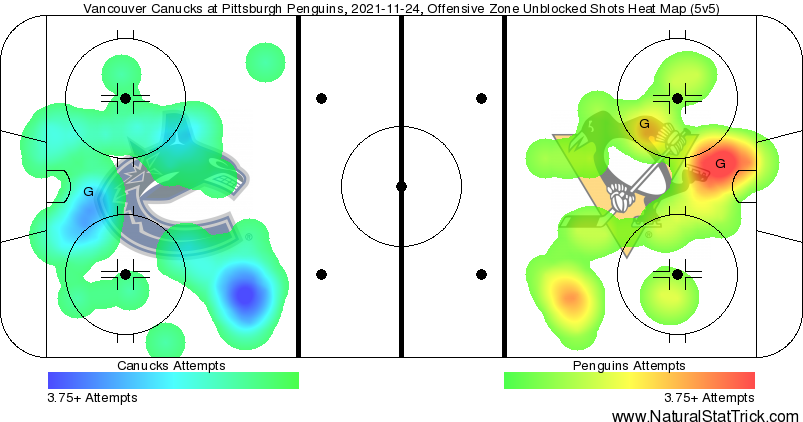 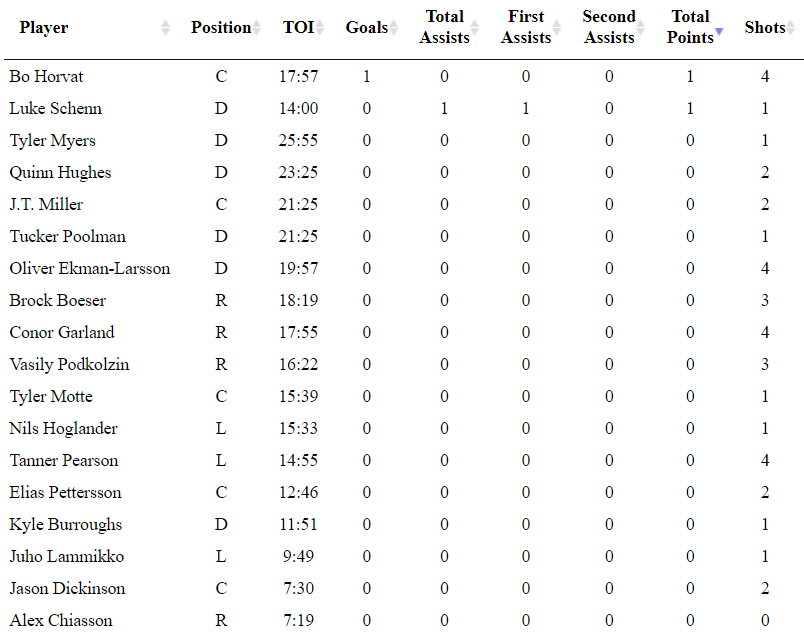 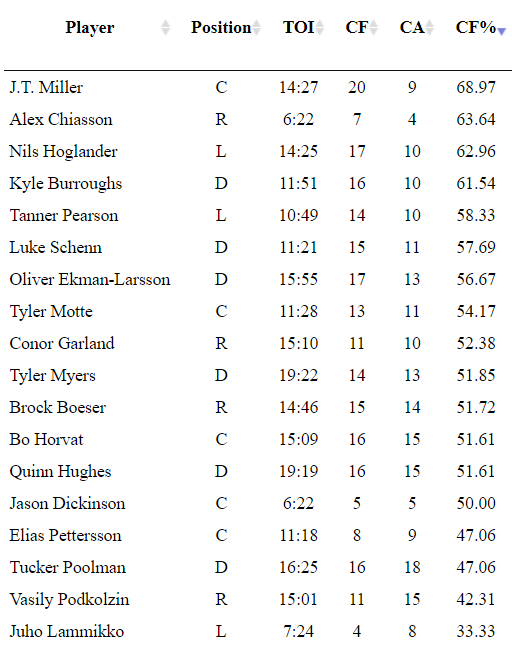 J.T. Miller felt like one of the only Canucks players who gave a damn. He led the team in Corsi with a 69% control of the attempted shot share. He played 21:25 and won 16 of 22 faceoffs.

“I wish I had answers for you guys,” said Bo Horvat when asked post game about what went wrong in the first period. “I think we are doing a good job of sustaining offensive zone pressure and getting shots towards the net. We are getting a lot of shots. It’s just a matter of getting to the dirty areas to go score those greasy goals. I mean, I find we’re getting lots of shots, but there’s not enough traffic, there are not enough bodies going towards the net to make it difficult on the goaltenders.”
The Canucks didn’t come out with enough effort in all three periods. They were severely outplayed in the first period, they gave up three goals in the second period and it took 10 minutes for them to get a shot in the third period.
“I don’t know if it’s necessarily the compete level,” said Green when asked if his team is giving him enough of a consistent effort. “I think we have some players that probably aren’t playing as good as they can. I think they’re trying to compete, just not getting it done.”
Green thought Wednesday night’s effort was a better effort than the Colorado game last week.
So there’s a win…
There’s no question that Canucks fans are displeased with the team’s effort this season. Fans are watching a team spiral out of control and it seems like there is nobody in the organization that can save them. There are questions if the general manager can even make a trade with his job status in question; the coach can’t find anything that works for the group; the top players are turning into ghosts of themselves and through it all; Thatcher Demko has been the only beacon of hope for a team that hangs him out to dry on a nightly basis.
Who knows where this team can go from here.
You’d like to think that up is the only option.
Unfortunately, it’s not.
The Canucks’ next game is Friday at 4 pm against the Columbus Blue Jackets.
Uncategorized
Recent articles from Faber