CanucksArmy post game: Thatcher Demko and the Canucks beat the Leafs on a Saturday afternoon 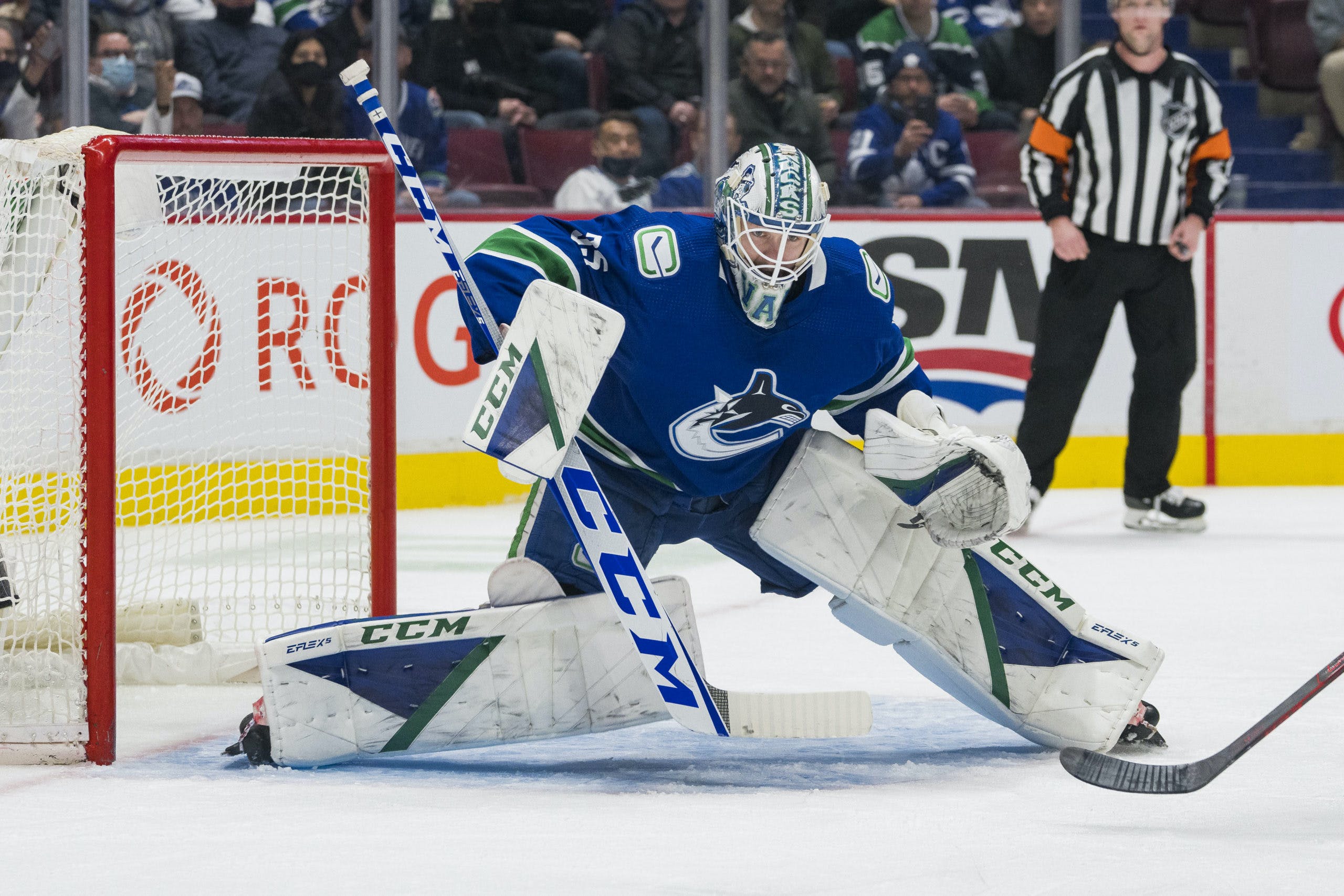 By David Quadrelli
9 months ago
The Vancouver Canucks were back at home to take on the Toronto Maple Leafs for a Saturday afternoon tilt from Rogers Arena in Vancouver.

Thatcher Demko got the start in goal for the Canucks while Petr Mrazek manned the crease for the Leafs.
Travis Hamonic made his return to the lineup after being out since December 8th.
Let’s do this!

“Go Leafs Go” chants rang through the arena early, but J.T. Miller took it upon himself to put an end to that.
After the Canucks moved into the Leafs’ end with numbers, Bo Horvat made a power move to the net. J.T. Miller corralled the loose puck and fired it home after Petr Mrazek found himself way out of position after getting bumped. 1-0 Canucks.
After the goal, “Leafs suck!” chants could be heard throughout Rogers Arena.
Then the Canucks took the first penalty of the game, in the form of a Vasily Podkolzin high stick.
The league’s worst penalty kill hopped over the boards to try to stop the league’s best power play.
Thankfully for the Canucks, they managed to escape unscathed. Even better — they got a power play of their own after Pierre Engvall got his stick up on Oliver Ekman-Larsson.
The Canucks moved the puck with poise, and after some hard work from both Miller and Horvat to get the puck back and prevent the Leafs from clearing the zone, the Canucks struck to make it 2-0 after Brock Boeser
The “Bruce there it is” chants began after this goal.
John Tavares had a chance in close but Demko was up to task in keeping the Leafs off the scoreboard.
With just over three minutes to go, Luke Schenn launched an absolute rocket of a pass from his own end to find Conor Garland at the Leafs’ blue line. As Garland broke in, he was held by T.J. Brodie, and the Canucks were back on the man advantage.
The Canucks failed to really get set up and the power play expired.
Thatcher Demko made a couple of final huge saves to close out the period, and the Canucks entered the second period up by a pair of goals.

Luke Schenn got the second period off to an ELECTRIC start after throwing a hit so hard that it broke the glass.
After a bit of a delay while the ice crew fixed the glass, we were back in action.
After the Leafs had a flurry of chances in the Canucks’ end, Bo Horvat drew an interference penalty after Justin Holl hauled down the Canucks’ captain during a footrace for a loose puck.
The Canucks gave up a quality shorthanded chance against and a couple of high-danger chances once back to even strength, but again, Demko was up to the challenge each time.
Horvat took a high-sticking penalty on Morgan Reilly and the Leafs finally managed to strike on the ensuing power play. John Tavares found Auston Matthews who wired a snap shot past Demko to make it 2-1 Canucks.
Brock Boeser and Bo Horvat broke in on a 2-on-1 but Petr Mrazek was up to the challenge to stop a pair of shots.
Luke Schenn then took a tripping penalty to send the Leafs right back to the power play.
Once again, the Canucks played with fire and got burned.
Jason Spezza let go of a slap shot that was neatly redirected by Ondrej Kase to tie this one at 2-2.
It felt like the Leafs had all the momentum from that point on until the Canucks’ fourth line hopped over the boards and just got the puck on net.
Alex Chiasson took a rather low-danger-looking shot from the top of the right circle, but the puck deflected right out in front off of Mrazek’s pads, and Juho Lammikko was first on the rebound to make it 3-2.
That score would stand was these two teams prepared for what was certain to be a high-octane third period.

The third period began with Morgan Reilly tripping up Tanner Pearson and getting sent to the box for two minutes with a tripping minor.
The Canucks couldn’t manage to get much of substance off on Mrazek, and the teams went back to even strength.
Nils Höglander got set up for a grade-A one-time chance by Vasily Podkolzin but missed the puck completely. In a game as close as this one, that’s one you need to bury.
With just over 12 minutes remaining, the Leafs were up 45-19 in shots.
As he so often does, Thatcher Demko was holding his team in this game.
Mitch Marner had a couple of brutal giveaways in the offensive zone and got booed by the Leafs fans that filled the seats at Rogers Arena.
The rust in Travis Hamonic’s game was apparent for most of the game, but was especially noticeable in the third period, as the Canuck defenceman appeared to be battling the puck and was late to defensive assignments.
The Leafs kept pressing, and at the three minute mark, they record their 50th shot of the game while the Canucks had just 23.
With 2:22 remaining on the clock, John Tavares took a high-sticking penalty to make the Leafs’ comeback chances just a little bit worse.
Down by both a man and by a goal, the Leafs pulled their goalie with 1:55 remaining in the third.
Brock Boeser chased a loose puck along the wall and dove to slide the puck to J.T. Miller at the blue line, and Miller moved in and fired the puck home to put the icing on the cake. 4-2 Canucks.
BUT WAIT!
The Leafs challenged the play and it was determined the play was offisde. 3-2 Canucks, and John Tavares back in the box for another 24 seconds with 45 seconds remaining on the clock.
Demko saved the best for last and shut the door on a flurry of Leafs chances that — had they gone in — certainly would have fallen under the “buzzer-beater” category.
3-2 Canucks final. 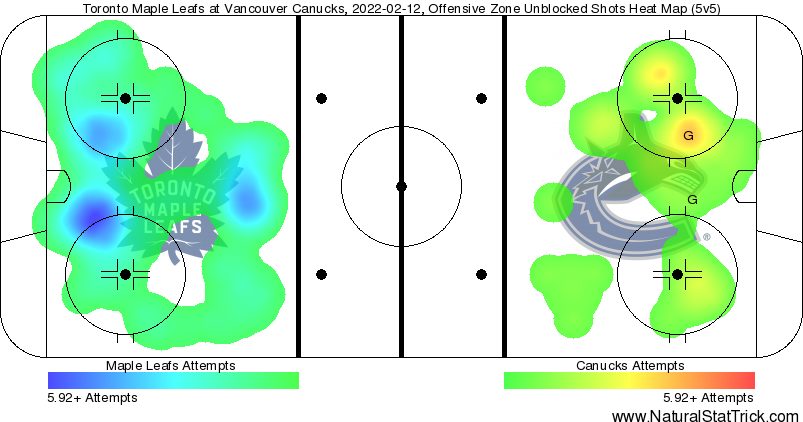 How can we give top performer honours to anyone but tonight’s first star, Thatcher Demko? He was electric once again, and with 51 saves, he was the biggest reason the Canucks won this game.
It’s as simple as that.

Saturday afternoon saw a passion-filled environment at Rogers Arena with the Canucks coming out on top thanks to their goaltender.
The Canucks won’t see game action for another four days, and will be on the road on February 17th when they will take on the San Jose Sharks before returning home to take on the Ducks.
Uncategorized
Recent articles from David Quadrelli