By David Quadrelli
9 months ago
It was another night in which Canucks fans got a look at the goaltender who will almost certainly serve as their backup next season, and boy, did Spencer Martin look good.
Their playoff chances may have officially ended tonight, but it was still an exciting night at Rogers Arena with plenty of Bruce there it is chants filling the stands as the Canucks donned their black skate jerseys for the second time this season.
Here’s how the Canucks lined up in this one.

Somewhat surprisingly, Travis Dermott was the odd man out tonight among the defence group, but head coach Bruce Boudreau clarified that Dermott was feeling ill, and only took warmup because Brad Hunt felt similar symptoms right before warmups took place.
Let’s do this!

Elias Pettersson made a smart play to beat out an icing call, then fed Brock Boeser in the slot with a beautiful no-look pass that had shades of a similar pass he made to Boeser in Pettersson’s rookie year.
Only this time, Boeser couldn’t bury it, and Rogers Arena remained quiet.
Sheldon Dries broke in with numbers after a turnover by Seattle at the other end, and instead of passing to Tyler Myers, who was streaking toward the net, Dries sniped it short side to make it 1-0 Canucks.
Then J.T. Miller did his thing and made it 2-0 after a backhand feed from Conor Garland.
On the goal, Quinn Hughes set the franchise record for most assists in a season with 58.
Serious question: How many times will Hughes break his own record before his career as a Canuck is finished? I’ll say five.
Kyle Burroughs was called for hooking, which gave the Kraken the game’s first power play with just over 11 minutes to go in the first.
At this point in the game, Seattle had yet to get a shot off on Martin, and it wasn’t until the power play expired — at the 8:26 mark — that Seattle got their first shot of the game off.
It was a good one, too, and one that Martin had to be sharp on in making sure the bottom of the net was sealed off.
The Canucks picked up their first power play of the game when Carson Soucy was called for cross-checking Elias Pettersson.
The first unit couldn’t get much done, but it was a different story for the second unit.
After a great hold at the line and a quick shift of his body, Vasily Podkolzin helped get the second unit some extended zone time. Oliver Ekman-Larsson then let go of a shot that found its way through traffic and into the top left corner to make it 3-0 Canucks.
Luke Schenn was called for interference with less than a minute remaining in the period, and Oliver Ekman-Larsson took a tripping penalty just 12 seconds into the Canucks’ penalty killing efforts.
As he was throughout the first period in its entirety, Spencer Martin was up to the challenge in keeping the Kraken off the board.

The Kraken still had over a minute to work at 5-on-3, and once again, Martin showed extremely well.
Martin faced two breakaway chances in the first two minutes of the period and looked calm and collected in denying them both.
Tyler Myers really wanted to know if Martin was up to the task of being Demko’s backup for a full season, however, because he took a tripping penalty.
But Brad Richardson wanted to get to the bottom of this case even more than Myers, as he took a tripping penalty.
And Martin certainly looked NHL ready on the sequence that followed.
After losing his stick sliding to his left to make an outstanding save on a one-timer, Martin made a flurry of saves without a stick.
The Kraken eventually struck after a defensive breakdown by the Canucks allowed Seattle to pull off a pretty passing play to generate a chance that Martin had no chance at stopping. 3-1 Canucks.
J.T. Miller was given an unsportsmanlike conduct penalty immediately after, and the Canucks were once again shorthanded.
This time, they killed it off.
Back at even strength, Seattle kept pressing. This time, it was Morgan Geekie who found twine to make it 3-2.
After holding the Kraken to just six shots in the first period, the Canucks were trailing in shots at the halfway mark of the period by a total of 19-13 as it took the Canucks nearly eleven minutes just to register their first shot of the period.
The Canucks went on the power play after a Karson Kuhlman penalty, but just nine seconds later, J.T. Miller took a hooking penalty to give us some 4-on-4 hockey.
Neither team scored, and then Luke Schenn took a tripping penalty, giving the Kraken another chance to even this one up.
They didn’t, and despite getting just two shots on goal off on Daccord in the period, the Canucks entered the final 40 minutes of play up by a goal.

The third period was an absolute snooze fest until the Canucks got a power play with 9:29 remaining, so let’s start there.
After winning the draw, the Canucks cycled the puck and set up an electric one-timer from Elias Pettersson that hit a stick and deflected out of play.
The Canucks won the next draw and again got set up. This time, it was Brock Boeser letting go of a one-timer, which led to a rebound that Alex Chiasson put into the crest of Joey Daccord’s sweater.
The penalty expired, but Luke Schenn wasn’t content with his team having just a one-goal lead.
After the original shot from Matthew Highmore trickled slowly past Daccord (unbeknownst to him at the time) Schenn made a beeline for the place he’s sworn to protect — the crease.
Upon arrival, Schenn banged home the loose puck to make it 4-2 Canucks.
Oh, and Quinn Hughes picked up another assist on the goal.
Speaking of Hughes, shortly after the goal by his defence partner, Hughes was on the receiving end of a pass from Conor Garland that he made no mistake in burying on a 2-on-1 to make it 5-2 Canucks.
This would stick as your final score, as the Canucks remain undefeated against the Seattle Kraken.
5-2 Canucks final. 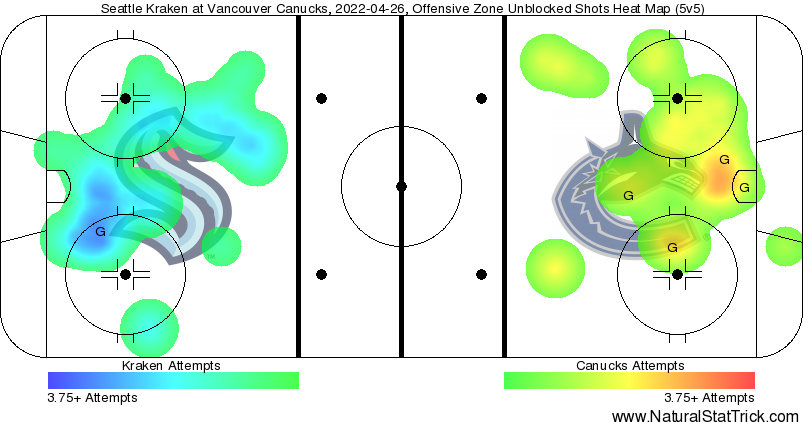 Thanks to Dallas and Vegas going to overtime, the Canucks were officially eliminated from playoff contention, but tonight’s game certainly had meaning for the club.
Tonight helped further validate the confidence management and fans alike have in Spencer Martin to bring some stability to the backup position at the NHL level next season.
“Spencer Martin was great,” said Boudreau post game. “I mean, his effort on the first five on three was outstanding alone, and without the stick too, I mean, he wants to prove he’s an everyday NHLer and you know, he’s played four games for us… It’s a small sample size, but he hasn’t disproved it, I’ll tell you that.”
It was a valiant effort from the Canucks to get back into the playoff conversation, and despite the club coming up just short, it’s got the club’s fans and players alike dreaming of better days.
“It’s unfortunate that we missed the playoffs with Dallas winning,” said Hughes post game. “But 31-15-9, I mean, we pushed hard and I think we can go into next year and have a similar record and just go from there.”
The Canucks will wear the black skate jerseys once again Thursday night when the L.A. Kings come into town before finishing out their season Friday night in Edmonton.
Uncategorized
Recent articles from David Quadrelli