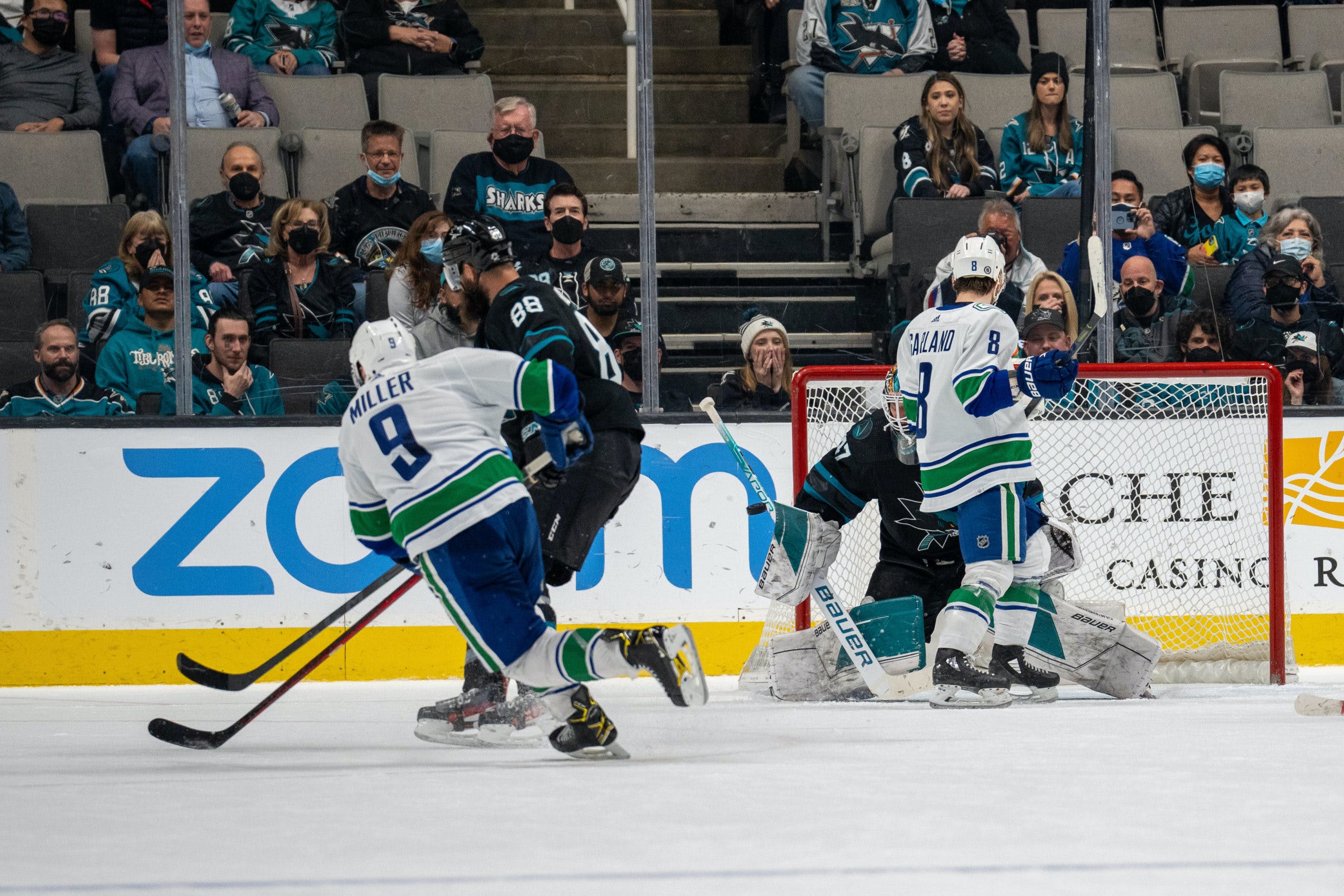 By Faber
9 months ago
After a busy week of practice, the Vancouver Canucks were back in action against a Pacific Division rival down in San Jose.
The Sharks hosted the Canucks for the second time this year. The Canucks put a hurting on the Sharks in the middle of December on a night where the team scored five goals and had a two-goal night from their newest top trade target, Brock Boeser.
Boeser has been playing excellent hockey since Bruce Boudreau took over and through the rumours that never seem to go away, he has continued to produce.
The Canucks once again looked to their top players to lead the way offensively and just 12 hours after president Jim Rutherford spoke so highly of him, Thatcher Demko was called to go back in the crease for the Canucks.
As for the Sharks, they sent James Reimer between the pipes.
The biggest addition to the Canucks’ lineup came with the return of Quinn Hughes as he returned off of COVID protocol. The defence core saw a big boost with their top defenceman rejoining the lineup. Hughes skated with Luke Schenn as his defence partner on Thursday.

As for our old friend Jonah Gadjovich, he was called to the lineup for the Sharks. Gadjovich was expected to be a healthy scratch for the Sharks but made his way into the lineup on a last-minute decision. The Sharks were hungry for a win against the Canucks as they sit two points behind the Canucks in the standings with two games in hand.
It’s a big Pacific Division battle between two teams clinging to hopes of making a playoff push in the final months of the season.
It was a late 7:30 San Jose start and we are all set for hockey.
Let’s go!

Shots were aplenty for the Canucks in the early stages of this game. Each of the four lines had at least one shot in the first five minutes of play. The line of Nils Höglander, Elias Pettersson and Vasily Podkolzin had the best early chance when a loose puck rolled along the right side of the crease.
Kyle Burroughs threw a massive hit in the neutral zone and was in the middle of a large scrum that did involve Gadjovich dropping the gloves looking for a scrap. It was more of a scrum than a fight and we saw coincidental roughing minors to Burroughs and Jeff Viel after the scrum. Viel was the player who got laid out by Burroughs and the penalties set up some four-on-four.
The Canucks were playing very physical in the first half of the period. Schenn and Travis Hamonic were launching their bodies and throwing some big hits. It was a high-tempo run of play to the halfway point in the period where the Canucks earned the first power play of the game with just under 9:26 remaining.
It was a new-look power play as Höglander, Pettersson, Podkolzin and Hughes were joined by Conor Garland on what could have been the first or second unit. The other power play has Tanner Pearson, J.T. Miller, Oliver Ekman-Larsson, Bo Horvat and Boeser.
No matter the case, both units struggled to set up in the offensive zone and the power play expired without much danger.
The Canucks had a strong cycle in the offensive zone where Tyler Myers ended up in the crease, and Boeser got his hands on the puck and waited out Reimer before ripping a wrist shot over him and into the back of the net. 1-0 Canucks.
The pressure continued on as Hughes made a great play carrying the puck through the neutral zone and into the offensive zone where he later made a good save to keep the puck in at the blue line. After the save, Hughes fired a shot from the point that bounced past Reimer to give the Canucks a two-goal lead. 2-0 Canucks.
That was all she wrote for the first period as the Canucks played a strong first period and skated off with a two-goal lead on the road.

It was one of the Canucks’ best first periods of the season. They outshot the Sharks by a count of 15-4 and spent a large majority of their time in the Sharks’ zone. The Miller-Horvat-Boeser line was excellent together and created scoring chances on almost all of their shifts while not allowing a shot against in their 3:36 together at five-on-five in the period.
The Myers-OEL pairing was great in the first period as they moved the puck well and looked good in the offensive zone while cycling the puck. Myers did something I have never seen him do when he went and screened the goalie as Miller rotated to the blue line. Myers was set in the crease and he didn’t want to move. It ultimately resulted in the Boeser goal so maybe we can expect to see the big-bodied Myers hanging around the opposing crease more often.

It was much more zone time domination early on for the Canucks but that extended time in the offensive zone ended with a bad change from the Canucks and Logan Couture capitalized during an odd-man rush as his pass went off of Myers’ stick and past Demko. This cut the Canucks’ lead down to one. Canucks lead 2-1.
Pettersson was cross-checked to the ice and the Canucks went back to the power play with 14:56 remaining in the middle period.
It was another horrendous power play attempt as the Canucks were able to get a shot on net with the man-advantage.
Just when the momentum was looking to swing in the Sharks’ direction, the Canucks’ depth pushed back. Burroughs jumped on a loose puck that gave him a great look from the slot, he fired the shot that bounced off of Juho Lammikko and into the netting. 3-1 Canucks.
A couple of coincidental penalties sent OEL and Viel back to the penalty box and we saw some more four-on-four with 8:21 remaining in the frame.
Boeser took a tripping call with 6:26 remaining and the Sharks had a short four-on-three before OEL and Viel came out of the box.
It didn’t take long for the Sharks to strike as Timo Meier fired a shot that beat Demko on the short side as he didn’t properly integrate to the post as he shifted across the crease. Canucks lead 3-2.
Logan Couture took an interference penalty and the Canucks went to work on their third power play with 5:16 remaining in the second. They were not good on their first two attempts but were able to immediately get set up on this attempt.
It was still not a good power play and they did not manage a shot on Reimer during the two minutes.
With 67 seconds remaining, Miller took a tripping penalty that sent the Sharks to their second power play. The Sharks tested Demko multiple times with some quality shots but the Canucks’ goaltender was up to the task and maintained the lead going into the intermission.

The Canucks’ defence completely fell apart in the second period as the Sharks attempted 31 shots in the period. Demko was good and was able to cradle the lead into the intermission. The big difference in the period came on the power play where the Sharks had six shots on net, six scoring chances and a goal compared to the Canucks, who had more than double the time with the man-advantage and only attempted one shot on net. The Canucks were the better team at five-on-five through 40 minutes but needed to have a good third period to hop on their flight with two points on the board.

The Sharks struck early and were two-for-two on the power play when Timo Meier scored his second goal of the game during the remaining power play time that carried over from the second period. 3-3 after Meier’s second goal.
After the goal, the Canucks were given their own power play when Meier bumped into Demko with 16:55 remaining. This game was quickly becoming all about special teams as the Canucks were scoreless on three attempts and the Sharks were two-for-two as the Canucks went to their fourth power play of the game.
The Canucks had their third straight scoreless power play where they were unable to even muster a shot on net. The power play was struggling to say the least and we were in a tie game where the win was looking like it may slip away from the Canucks.
Miller took another penalty with 9:24 remaining and gave the Sharks’ red-hot power play another chance after scoring on their first two attempts.
It was a good kill for the Canucks and Miller took the ice with the game remaining tied at threes.
Burroughs set up another goal for the Canucks as he got a shot-pass off that Conor Garland had a couple of swings at and roofed over Reimer. 4-3 Canucks.
The Sharks pulled their goalie with 40 seconds remaining and got set up with six attackers in the Canucks’ zone. Alexander Barabanov scored with what looked to be 0.0 left on the clock. It was reviewed and the goal counted with 0.6 seconds remaining. 4-4 and we are off to overtime.

The Canucks were controlling possession and were able to draw a penalty with some strong play from Garland around the net. With the goalie pulled, Miller found some open ice and ripped a wrist shot past Reimer for the sudden-death winner and the Canucks flew home as winners in their 50th game of the year.
5-4 final. 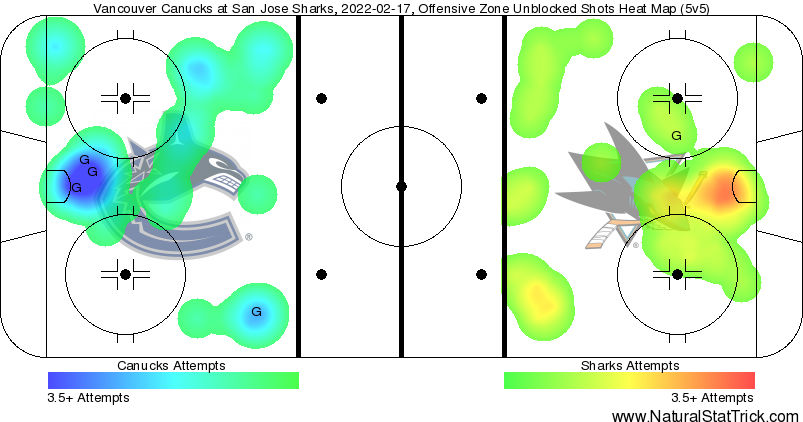 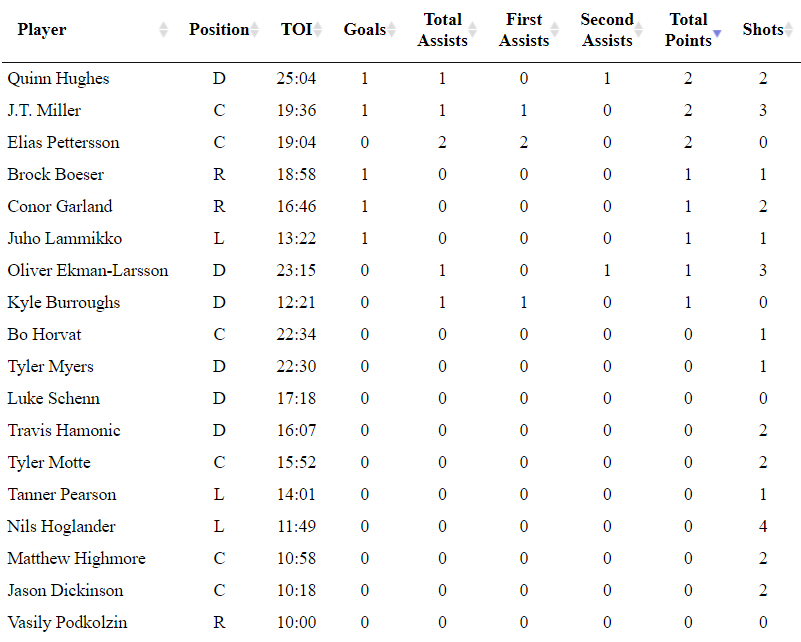 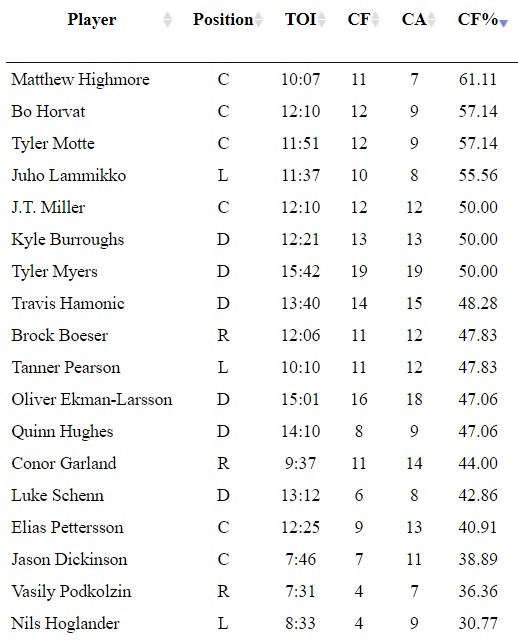 As you can see from the gameflow chart at the first part of “The Fancies”, the Canucks began with a great start but weren’t able to follow that up in the second period. Bruce Boudreau spoke about the Canucks’ downfall in the second period.
“We went from playing maybe our best first period of the year to all of a sudden collapsing,” said Boudreau. “[We knew] that they were going to come out really hard in a second period and it was just a lack of energy and composure in the second period.”
It was a gritty win for the Canucks as they snuck out two points in a game where they weren’t the better team in the second and third period but most importantly found a way. Miller came through and clutched up in overtime as he so often does.
They aren’t all Picasso’s but it does feel like this is the type of game that the Canucks surely would have lost earlier in the season. To be able to come out of this game with two points shows that this team can scratch out points even when they don’t give a 60-minute effort. You don’t want to fall into a pattern of only showing up for 20-30 minutes in a game but on Thursday night, it was just good enough for the Canucks.
At the time of writing this, the Canucks sit three points out of a wild card spot and are continuing to fight towards a playoff push in the next couple of months. There are games in hand for the Canucks to jump but that may not matter if the Canucks can put together another winning streak.
This gnarly win is the type of win that Boudreau thinks could get the group going.
“Sometimes those are the games you need to get a jumpstart,” said Boudreau.
Uncategorized
Recent articles from Faber