CanucksArmy post game: A solid effort from all four lines gives Canucks a 3-1 win over the Hawks 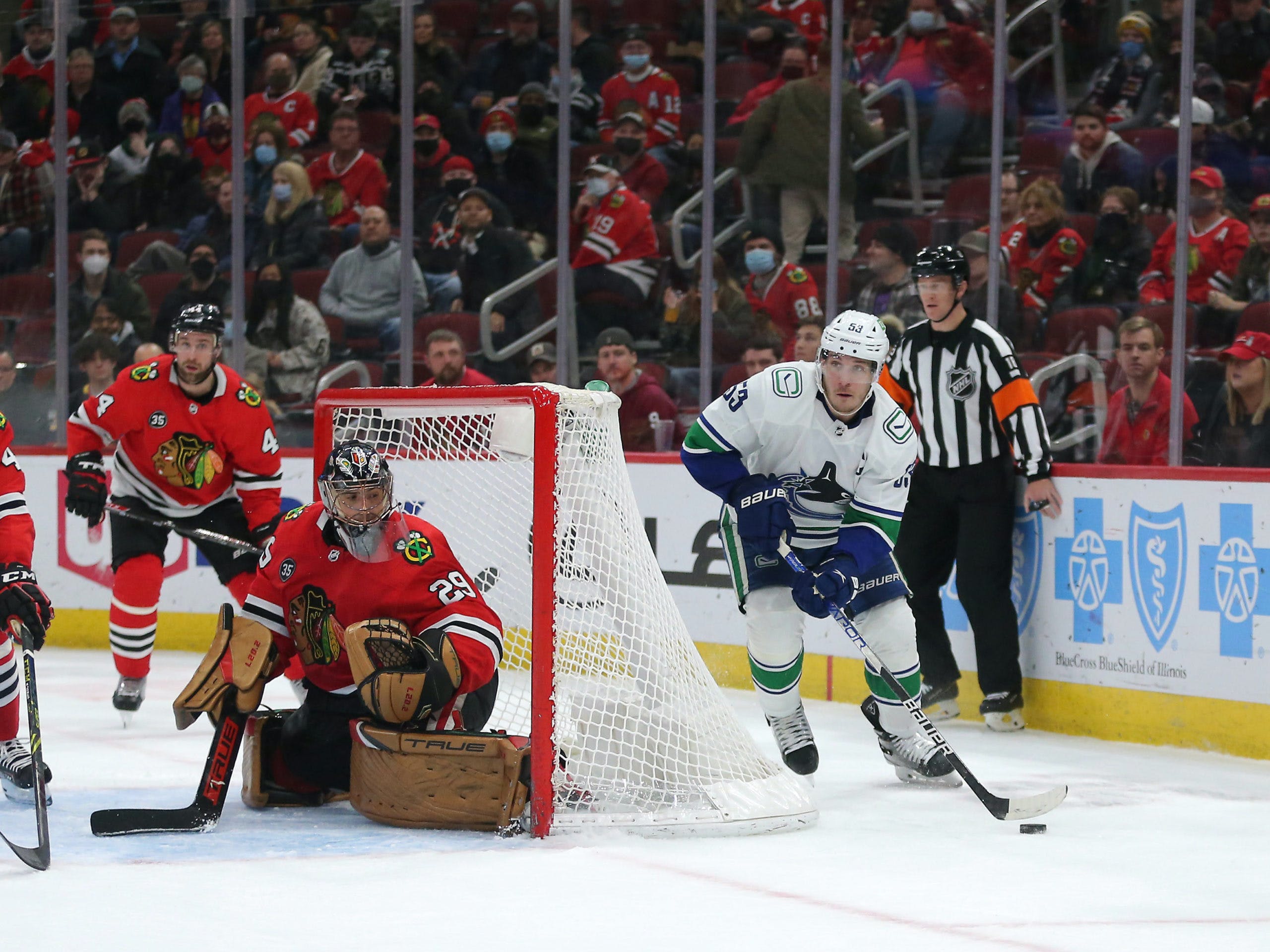 By Faber
11 months ago
Just a couple of days ahead of the all-star break, the Vancouver Canucks thrashed into the unofficial halfway point of the season with back-to-back games beginning with the Chicago Blackhawks.
The Canucks only have one win over their last five games and needed to capitalize with a win over a weak Blackhawks team that has also been struggling of late as they only have one win over their last six games.
It was a Jaroslav Halak night as Bruce Boudreau confirmed Halak’s start in the morning skate availability. Marc-Andre Fleury was called to go between the pipes for the Blackhawks as we were set to see a battle of vets in the creases.

The defence core remained the same as Tucker Poolman continued to miss games with what Boudreau called a sickness that was unrelated to COVID.
Vasily Podkolzin was absent from the lineup as Jason Dickinson moved up to play with Brock Boeser and J.T. Miller. It was Miller’s 600th game in the NHL.
It was later confirmed by The Athletic’s Thomas Drance that Podkolzin’s absence from the lineup was not due to COVID protocol.
It was another early start as the Canucks were out east in Chicago. So, it’s time to hop into the game recap.
Let’s go!

It was an excellent start for the Canucks as they fired a ton of shots on Fleury in the opening few minutes of the game. It was a much different look from their scoreless effort on Saturday night. The Canucks clearly had their legs early as each line had a shift in the Blackhawks’ zone to begin the game.
There were a few icing falls that slowed the game’s pace down after a quick start to the action.
Just when the play began to slow down, the fourth line went to work with Nils Höglander doing a good job of moving the puck up ice through the neutral zone. The puck got to Justin Dowling who made a great pass to set up an Alex Chiasson shot from the slot and he ripped it past Fleury. 1-0 Canucks.
It also happened to be Chiasson’s 600th NHL game in a game where he broke the tie. Chiasson continued to play well in the period and drew a hooking call that sent the Canucks to their first power play of the game.
It was quite a different-looking power play as Hughes spent time on both units in the quarterback and right half-wall position. It was an awkward-looking power play and the Canucks weren’t able to score.
Once the power play expired, the Blackhawks came down on a three-on-one and had a miss on a tap-in but drew a power play of their own.
The Canucks were able to kill off the penalty and that left 40 seconds remaining in the first period. Tyler Myers had a good chance with a few seconds left but was robbed by Fleury to end the period.

It was a night and day difference between Monday’s game and the poor performance we saw on Saturday night. The Canucks had 21 shot attempts in the first period during 16 minutes of five-on-five. They also only allowed five shot attempts against at five-on-five. They dominated the pace of play and were taking it to the Blackhawks in the first 20 minutes.
It was going to be a great game to watch and cover if the next two periods were similar that what we saw in the first 20 minutes of play.

The period began with more of what we saw in the first period. The Canucks had all the pressure in the first few minutes and it resulted in Hughes firing a shot off of Boeser’s stick and into the back of the net. 2-0 Canucks.
It was a pretty tip from Boeser as he went to the net and tipped the puck into a tiny opening to beat Fleury.
Just seconds after the goal, Pettersson drew a tripping penalty and sent the Canucks to their second power play of the game. They weren’t able to get much going offensively and the man-advantage expired with 13 minutes remaining in the period.
By the halfway point, the Canucks were doubling the Hawks in shots by a count of 20-10. Things were looking good for the Canucks as they continued to skate with energy.
Miller picked off a pass and walked in on a partial break that saw him get tripped and not be able to get a good shot off. That sent the Canucks to their third power play of the game. The power play went on for 51 seconds before Miller took a slashing penalty of his own and sent the game into four-on-four action.
Nothing happened during the four-on-four action or the one minute of power play time that the Hawks had.
Halak was beginning to find a groove and he made a big save on an Alex Debrincat shot from the slot. The Canucks were dominating the control of play but Halak continued to be there to shut the door when the shots against happened. Halak saw 14 shots in the first 40 minutes and stopped them all.

The Canucks took a two-goal lead into the intermission and they deserved to be leading by at least that. The Hawks pushed back a bit in the second period but only had a couple of sequences where they looked dangerous. The Canucks were in control of this game with 20 minutes to go in the game.
The Pettersson-Horvat-Garland line was noticeably good when you looked at the advanced stats through 40 minutes. That line had 11 attempted shots for compared to three shot attempts against. They were spending a large majority of their time in the Hawks’ zone and getting scoring chances on what felt like every shift.

The Hawks came out strong in the third period and had some quick shots on Halak but he was able to stand tall through the opening handful of minutes.
Near the midway point of the period, the teams were trading scoring chances with some wide-open play. It was a much different look for the Canucks as they were pushing for a three-goal lead instead of protecting a two-goal lead. It’s an aggressive style that can bite you if it goes the wrong way but the Canucks were still getting the majority of scoring chances in the game.
The Blackhawks had a well-put-together cycle that ended with a shot from Connor Murphy that beat Halak to bring the Hawks within one goal. 2-1 Canucks after the Murphy goal.
A sloppy change from the Blackhawks saw the refs call a too many men on the ice penalty. The Canucks caught a break with 3:07 remaining in the third period and went to the power play.
The power play expired and we were back to five-on-five with one minute remaining in the period. The Hawks got the puck into the Canucks’ zone with 40 seconds remaining and pulled their goalie. Luke Schenn picked up a loose puck and fired it into the empty net from his own zone. 3-1 Canucks.
That was good enough for a final. The Canucks win their first game of the road trip. 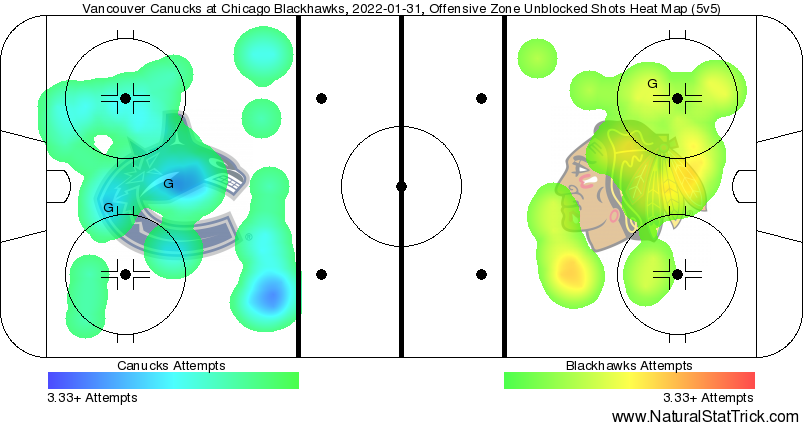 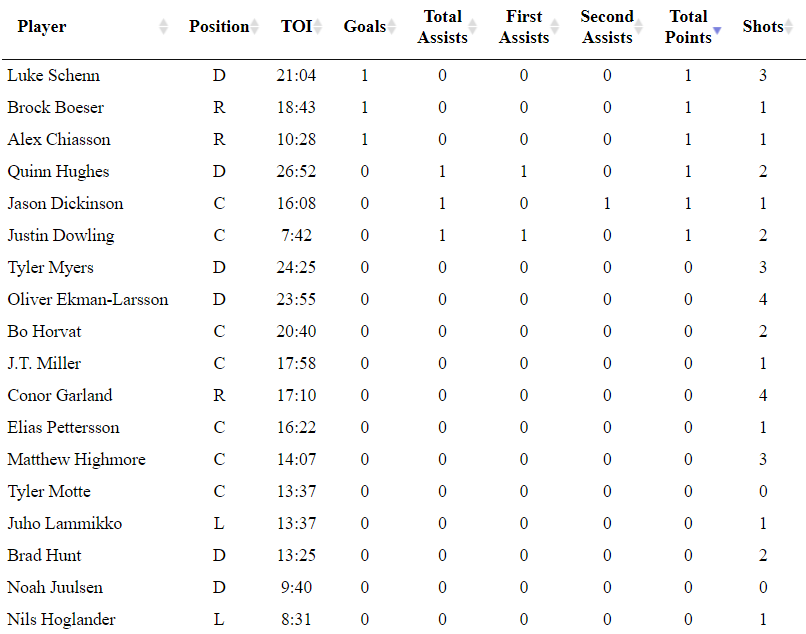 I’m going to go off the board a little bit here and say that the top performer was Luke Schenn. The veteran defenceman logged 21:04 of ice time on Monday night, he scored the empty-net goal to seal the deal and delivered a ton of big hits that added up to a total of 12 hits on the night.

You could tell that the Canucks were going to be victorious after the first five minutes of play. They had their pedal to the ground in the opening handful of minutes and though they took some pressure off the gas later in the game, they stayed in control. The top-four defencemen logged a ton of minutes with each of Myers, OEL, Hughes and Schenn getting over 21 minutes of ice time.
Quietly, Halak was once again great in net for the Canucks. He faced 21 shots and saved 20 of the shots he faced. He didn’t have to deal with a ton of high-quality scoring chances but was always there when a save needed to be made. The coach spoke about that in the post-game.
“When you’ve got goaltending, you’re in every game,’ said Boudreau. “We’ve been blessed with that and when you only give up one goal a game, you’re going to be in every game and you’re going to win a lot of them. We’ve gotten great goaltending since I’ve been here, I don’t know what was happening before but we’ve been getting great goaltending and the players believe in our goalies. When that happens, they take more chances because they know that the goalie is back there to defend them.”
It’s safe to say that the Canucks have been leaning on their goaltending through Boudreau’s tenure but tonight was more about the group in front of the caged netminder. The team went out and won this game in the early parts of the game and after a dominant first period, it was smooth sailing for the final 40 minutes. The Canucks played a great game and came out of it as the much-deserving winners.
Uncategorized
Recent articles from Faber