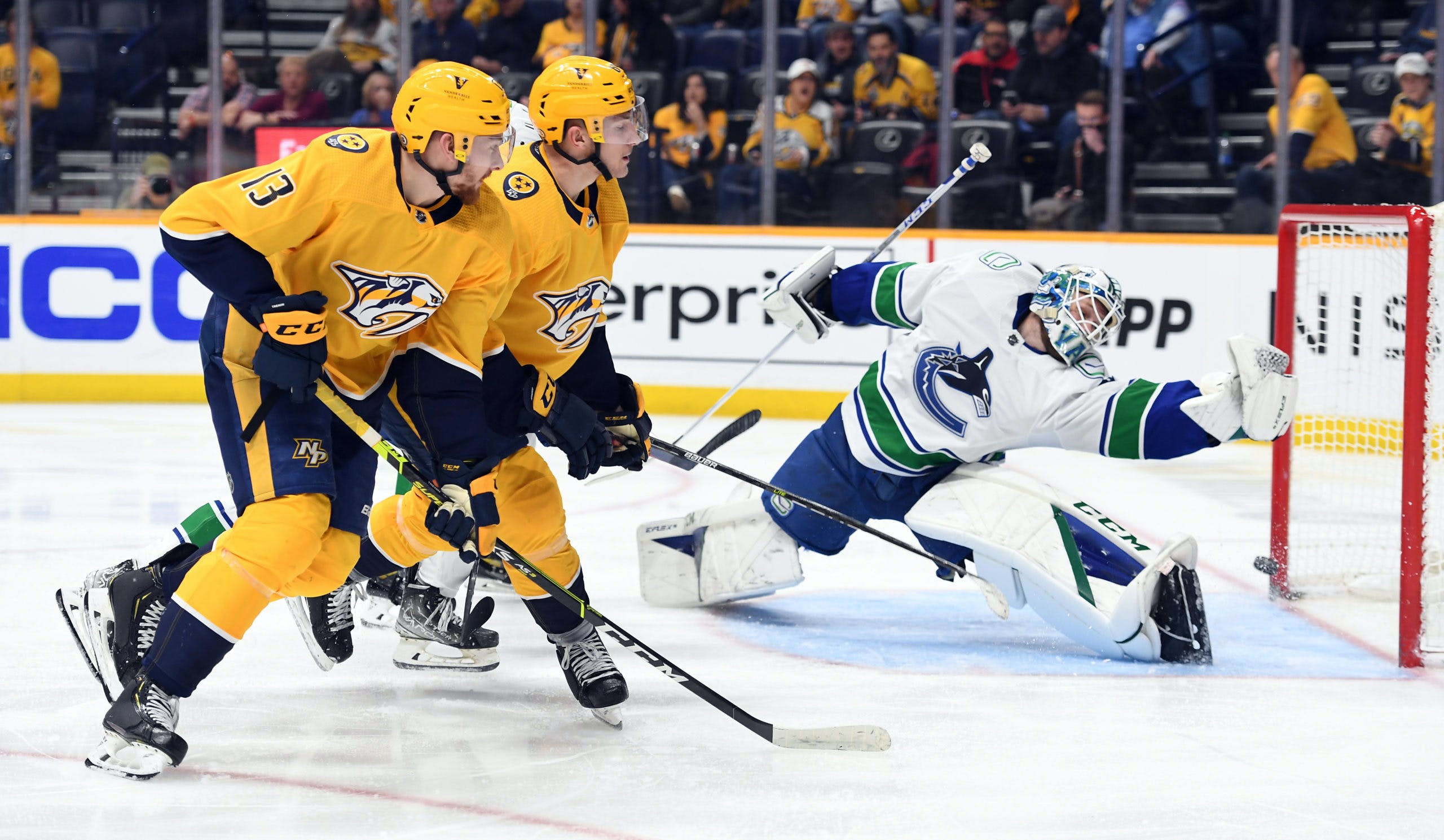 By Lachlan Irvine
11 months ago
Fresh off a much deserved 3-1 win against the Blackhawks, the Vancouver Canucks looked to finish their road trip with seven out of a possible eight points as they took on Juuse Saros and the Nashville Predators.
It’s Vancouver’s final game before the All-Star break, and for the players, one final chance to impress management before the stretch drive to the postseason begins.
Not to mention two All-Star goalies in Saros and Thatcher Demko battling it out for a crucial pair of points. What could be a better way to start the month of February?

Bruce Boudreau made a few key changes to the forwards today. Most notably, Nils Höglander was healthy scratched for the first time in 101 games, being replaced by the previously scratched Vasily Podkolzin. Returning to the lineup alongside Podkolzin was Tanner Pearson, who went straight from COVID protocol to the first line with J.T. Miller and Brock Boeser.
Let’s play hockey!

If the Canucks and Predators wanted to play their weirdest 20 minutes of the season, they sure accomplished it.
With Nashville coming off a week-long layoff and the Canucks playing their second game of a back-to-back, the first period was wide open. Both teams traded quality scoring chances until Vancouver’s newly minted second line drew first blood.
Midway through the first, after a Nashville breakout attempt clanked off a few skates, Juho Lammikko quickly pounced on the loose puck. Matthew Highmore had the heads up to get between the Preds’ defence, Lammikko quickly chipped him the puck with Ryan Ellis bearing down, and Highmore slid it in under the glove of Juuse Saros. 1-0 Canucks.
After Highmore’s goal, it looked like the Canucks were going to hop in the driver’s seat and take charge of the game. But Vancouver’s struggling special teams ended up being the difference, particularly following their first power play attempt of the night.
Right as Tanner Jeannot stepped out of the box, Oliver Ekman-Larsson’s dump in got intercepted and turned back the other way. Ryan Johansen picked up the puck near the Vancouver blue line, skated in with Brock Boeser the only man back, and fooled Thatcher Demko with a short side shot to tie the game. 1-1.
Just over a minute later, things went from bad to worse. As the Canucks got caught on a bad change, the Predators moved the puck into the attacking zone. Philippe Myers ripped a quick shot on net, Filip Forsberg deflected it in past a screened Demko. 2-1 Preds.
But just as quickly as the Predators took the lead, the Canucks answered back. With two and a half minutes to go, Brock Boeser worked the puck up from along the corner boards to Oliver Ekman-Larsson, who caught the puck from behind, whipped around and rifled it past Saros for his third of the season. 2-2 tie.

Overall, it was a very sloppy first 20 minutes of play from both sides. If the Canucks found a way to lock down their own end of the ice and start hemming the Predators into their own zone, their odds of walking away with the win were pretty good.
It would just be a matter of who settled down first.

The Canucks completely tilted the pace of play in the second period, but it was Nashville that walked away with a lead.
After J.T. Miller was put in the box for slashing Philippe Myers, Nashville’s power play made quick work of their chance. Roman Josi feeds a long pass to a wide-open Filip Forsberg, and Martin Erat’s replacement makes no mistake. 3-2 Predators.
But even as the Canucks ramped up the pressure, Vancouver’s attack ran into the same problem that so many Predators opponents have; Juuse Saros standing on his head.
Saros kept out all 14 shots he faced in the second period, and a once wide-open game began looking like a vintage “getting Goalie’d” situation for the Canucks. The Preds also gained a bit more confidence as the period went on, culminating in Mark Borowiecki throwing a huge hit on Oliver Ekman-Larsson.

Quantity doesn’t always mean quality, and that’s what separated Nashville and Vancouver in the second. While the Canucks threw mostly perimeter shots at the net and worked for a rebound, the Predators got just five shots on goal in the second, and Forsberg’s was absolute quality.
The net-front presence for the Canucks has vastly improved since Bruce Boudreau came aboard, but Vancouver still needs to work on actually getting first shots in close. If they could pull a few more snap shots from in around the slot area in the third, it might’ve been able to force Saros back into his net.

If the Canucks were going to have a shot at recovering a point out of this game, they needed to bring the same effort they had in the second period, while still limiting the Predators’ chances in front of their net.
But it was Nashville that poured on the pressure early in the final frame, and it cost the Canucks dearly. A minute and a half in, Tanner Jeannot managed to get behind the defensive coverage of Luke Schenn just as Mattias Ekholm threw a shot on goal that Demko kicked out into the slot. All Jeannot had to do is tap it home. 4-2 Nashville.
From that point on the Canucks never seemed able to find their momentum again. The Preds outshot the Canucks 12-9 in the final frame, and the chances Vancouver got never led to sustained pressure, thanks in large part to Saros’ work swallowing up shot attempts and controlling rebounds.
Alas, the only true highlight of the third period was Conor Garland’s absolutely devastating hit on Philippe Myers that sent him flying over Demko and into the net. Unfortunately, the NHL ruled that players crossing the red line doesn’t equate to a tying goal. Maybe some day, Conor.
Even with the goalie pulled, the Canucks simply mustered a quality opportunity, and spent most of the final minute trying to stop Forsberg from icing the hat trick goal.
The horn sounded, and the Canucks head into the All-Star break at .500 with 37 games to go. 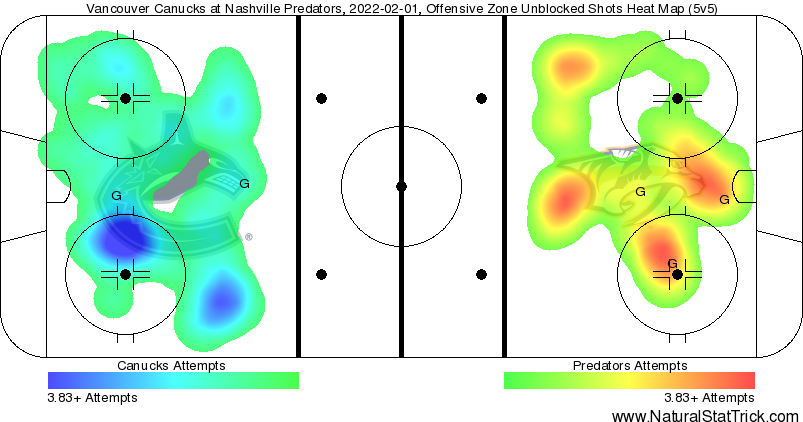 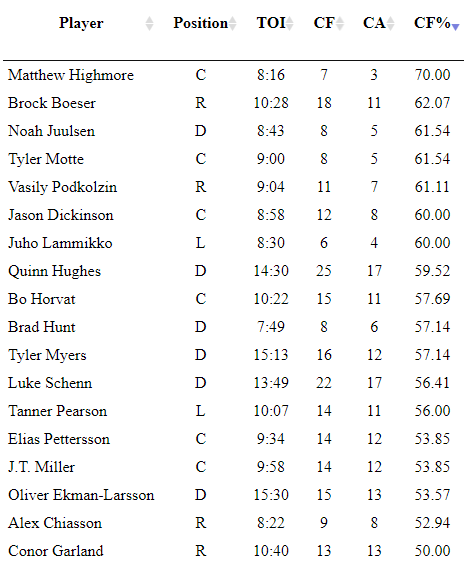 He only had an assist on the night, but Tanner Pearson gets the nod in my book. Coming off a COVID layoff to step into a top line role isn’t easy for anybody, and Pearson’s line with Boeser and Miller easily had the most continuous pressure and best scoring chances of any other forward line. Pearson also led the Canucks in shot attempts on the night with six.

Back to backs on the road are a task that few (if any) NHL teams enjoy, and coming off a win on Monday against Chicago it’s easy to try and brush off this loss as an unlucky break. But the Canucks definitely had something more to offer that wasn’t there in this game.
Elias Pettersson had just one shot on goal in 16 minutes of ice time. Conor Garland and J.T. Miller each had some good moments, but ended up with a lot of goose eggs on the scoresheet. Even Thatcher Demko, who’s been so reliable all season long, had an off night with some of the goals he allowed (and frankly, he’s earned a free pass for it).
But that just shows you how much higher people’s expectations are for the Canucks now than they were just a couple months ago. If you’d told me on December 4th that by the All-Star Break the Canucks would be back to a .500 record, I’d have called you crazy. And so would a lot of other people in this market.
All we can ask for the Canucks in their current state is to play competitive hockey as long as humanly possible, and once the real playoff race begins after All-Star Weekend, the stakes are only going to get higher.
Let’s just hope we see a lot more efforts like the one in Chicago versus the one we saw in the later stages against the Predators tonight.
Uncategorized
Recent articles from Lachlan Irvine