CanucksArmy post game: The power play and Thatcher Demko, Höglander’s insurance snipe, and the 2-on-1 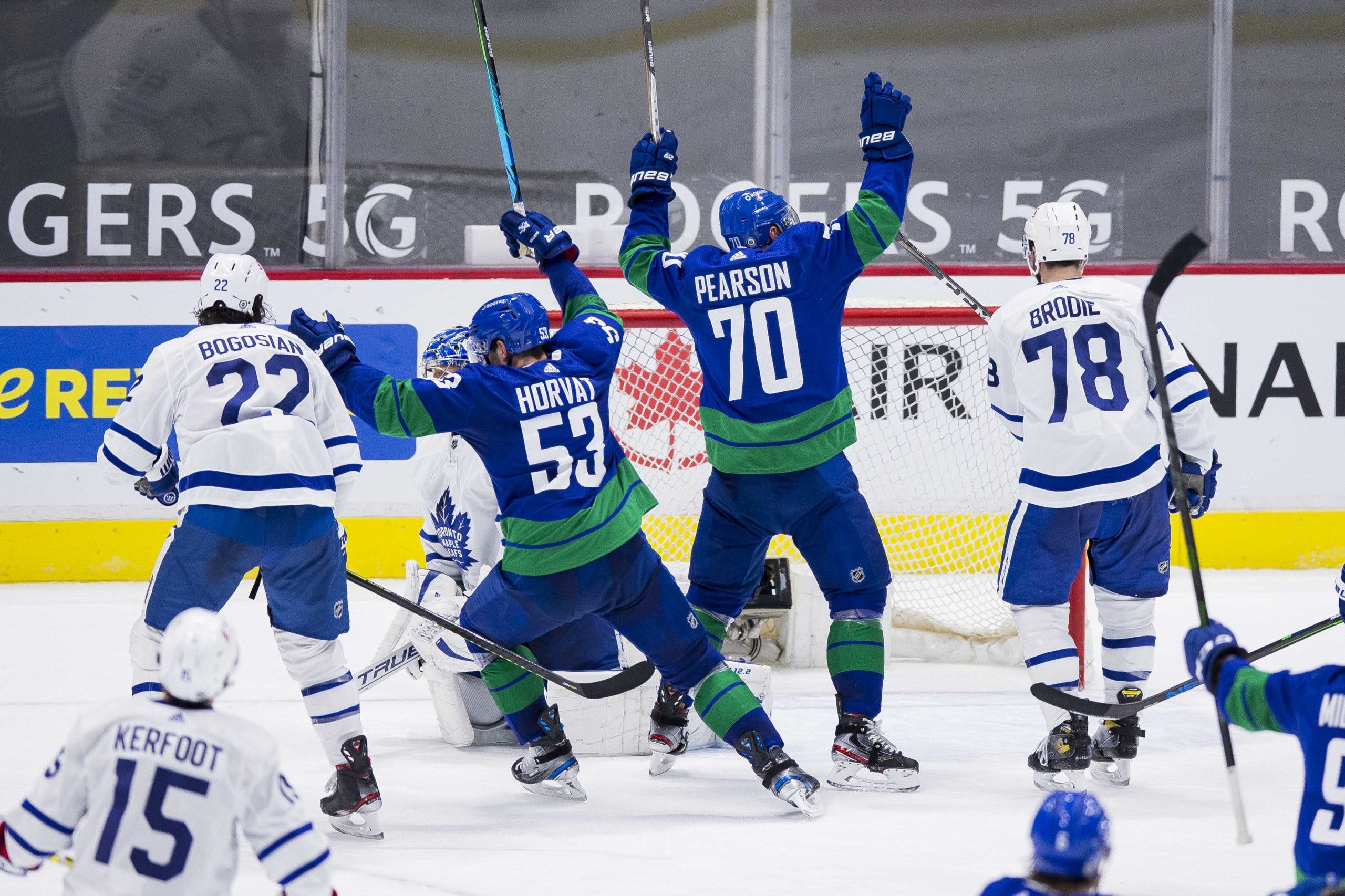 By David Quadrelli
1 year ago
The Vancouver Canucks welcomed the Toronto Maple Leafs back to Rogers Arena for the second of a two-game series in which the Canucks had a chance to sweep.
And that’s exactly what they did, winning the game by a score of 4-2.

Elias Pettersson remains out day-to-day with an upper body injury. Here. We. Go.

The Canucks were on their heels early, with Jordie Benn and Tyler Myers getting hemmed in their own end for the first minute of play. Then the Elias Pettersson-less version of the lotto line with Nils Höglander on the wing and JT Miller playing centre, gave up a five-alarm chance to the Leafs, Thatcher Demko was up to the challenge.
Höglander created a beautiful chance behind the Leafs’ net with a hard forecheck, and calmly flipped a puck out in front to Jayce Hawryluk who couldn’t get the puck behind Freddie Andersen, despite Andersen facing the wrong way and having no clue where the puck was.
The Canucks were off to the power play early on in this one, with Auston Matthews taking a high sticking penalty. The Pettersson-less first unit came out and was buzzing right away. They managed to convert after JT Miller came flying down the wing like a man on a mission and sent the puck right through the blue paint for a tap-in goal for Brock Boeser.
Antoine Roussel got under the skin of Auston Matthews, and the two got into a shoving match that resulted in Matthews’ stick breaking. This nearly led to a Canucks goal, but regardless, the fourth line impacted the game in a positive way by keeping Toronto’s top line hemmed in their own end.
The Leafs tied this one up after John Tavares busted down the wing in his Maple Leafs pyjamas and ripped home a slap shot that beat Demko cleanly on his blocker side.
The absence of Pettersson certainly stings, but it stings a little bit less when Jake Virtanen is playing the way he is, and when Höglander plays with the same energy he’s brought every night this season.
In the first period, the Canucks held their own, and their top two lines were both driving play well.

The second period kicked off with some pretty back and forth action, but it was the Leafs who broke the 1-1 tie with a cross-crease feed that Demko really didn’t have much of a chance to stop.
You know who did have a chance to stop it though? Tyler Myers.
I’m just going to leave this here.
The Pettersson-less Lotto Line continued their strong place from the first period into the second. They were generating tons of high-quality chances, and Höglander looked right at home alongside Boeser and Miller.
The Leafs got another power play after Roussel went off for cross-checking. The Canucks’ bench was hollering for a high-sticking call shortly before that and was even louder once the refs called the penalty on Roussel.
The Canucks killed it off, and actually had two dangerous-looking chances while short-handed. Jay Beagle broke in with space and wristed a puck over the net, and then shortly after, Brandon Sutter found himself on a partial breakaway. Sutter got Andersen to open up but couldn’t tuck the puck far side.
Leafs fans on Twitter were having a collective meltdown over this play featuring Jake Virtanen and Auston Matthews:
Somebody needs to get the department of player safety on the phone immediately.
To be fair, both teams seemed incredibly displeased with the job the officials were doing tonight.
Höglander set up Boeser for a beautiful opportunity after he managed to negotiate the puck through a couple of Leafs’ skates. Boeser rarely misses when he’s given that much time and space to rip it, but unfortunately, that’s exactly what he did.
The Leafs generated some more high-danger chances toward the final minutes of the period, but this one remained 2-1 Leafs heading into the third period.

The Leafs kicked off the third with a glorious chance that Demko managed to turn it away.
The next five minutes were all Leafs, with Demko continuing to shut the door and keep his team in it.
“I felt like we were on our heels a little bit to start the third,” said head coach Travis Green. And he was absolutely right.
Then the tides changed.
William Nylander took a delay of game penalty without about 13 minutes remaining and on the heels a strong shift from a loaded top line featuring Bo Horvat alongside Miller and Boeser.
The Canucks went to the power play and once again managed to convert with the man advantage.
Bo Horvat tipped home a shot off the stick of Brock Boeser and the Canucks were right back in it. 2-2.
Then, before Al Murdoch could even finish announcing the Horvat goal in the arena, the Canucks managed to take a 3-2 lead after JT Miller buried home a rebound on a broken play in front of the Leafs’ net.
The Canucks were going to need to be geat if they hoped to to pull this one off, and they were.
After the Leafs gave up two three-on-ones, the Canucks managed to convert after Höglander looked off Nate Schmidt and Brock Boeser before ripping the puck cleanly past Andersen and off the back bar for his fifth of the year. 4-2 Canucks.
The Canucks closed this one out. They didn’t blow a lead.
They didn’t turn the puck over at the offensive blue line and give up a bad goal that broke their backs.
In fact, they came from behind against the best team in their division and won.
Where was this team a few weeks ago? 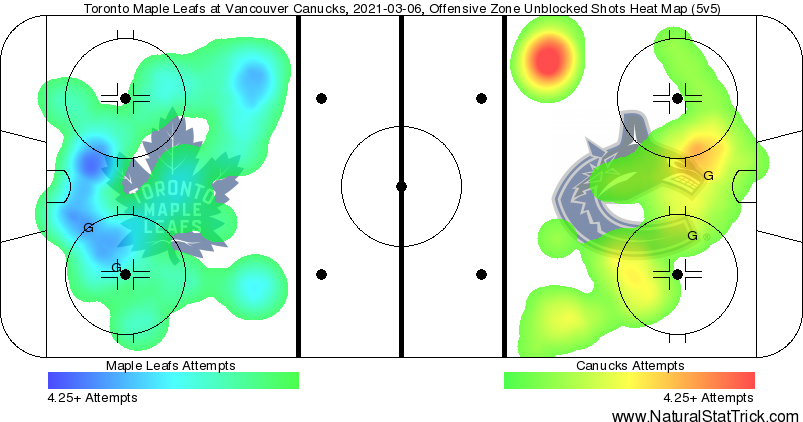 Honestly, I completely missed this when it happened:
Also, this is a tweet from March 1st, just so we’re clear.

Brock Boeser: Boeser has had a fantastic season so far. Not only has he been putting up points, but he has been driving play exceptionally well and has been all over the ice, playing a complete 200-foot game. He was on the ice late when Toronto had their goalie pulled and was up to the task.
Thatcher Demko: Demko has consistently been great for the past little bit, and that continued tonight. He’s a major reason they won these last two games.

“It’s nice to get a bounce,” said JT Miller post game. That quote sums it up pretty well. It feels like all season long, no matter how well they played, the Canucks just couldn’t get the job done.
They’ve certainly been one of the unluckiest teams in the league, so for them to start getting some luckier bounces as they did on Miller’s goal is huge.
It’s not going to be easy by any means, and the teams ahead of them all have played fewer games than them, but the Canucks aren’t quite out of this just yet.
The Canucks will be back at it Monday night when they take on the Montreal Canadiens in game one of a two-game series at home.
Uncategorized
Recent articles from David Quadrelli