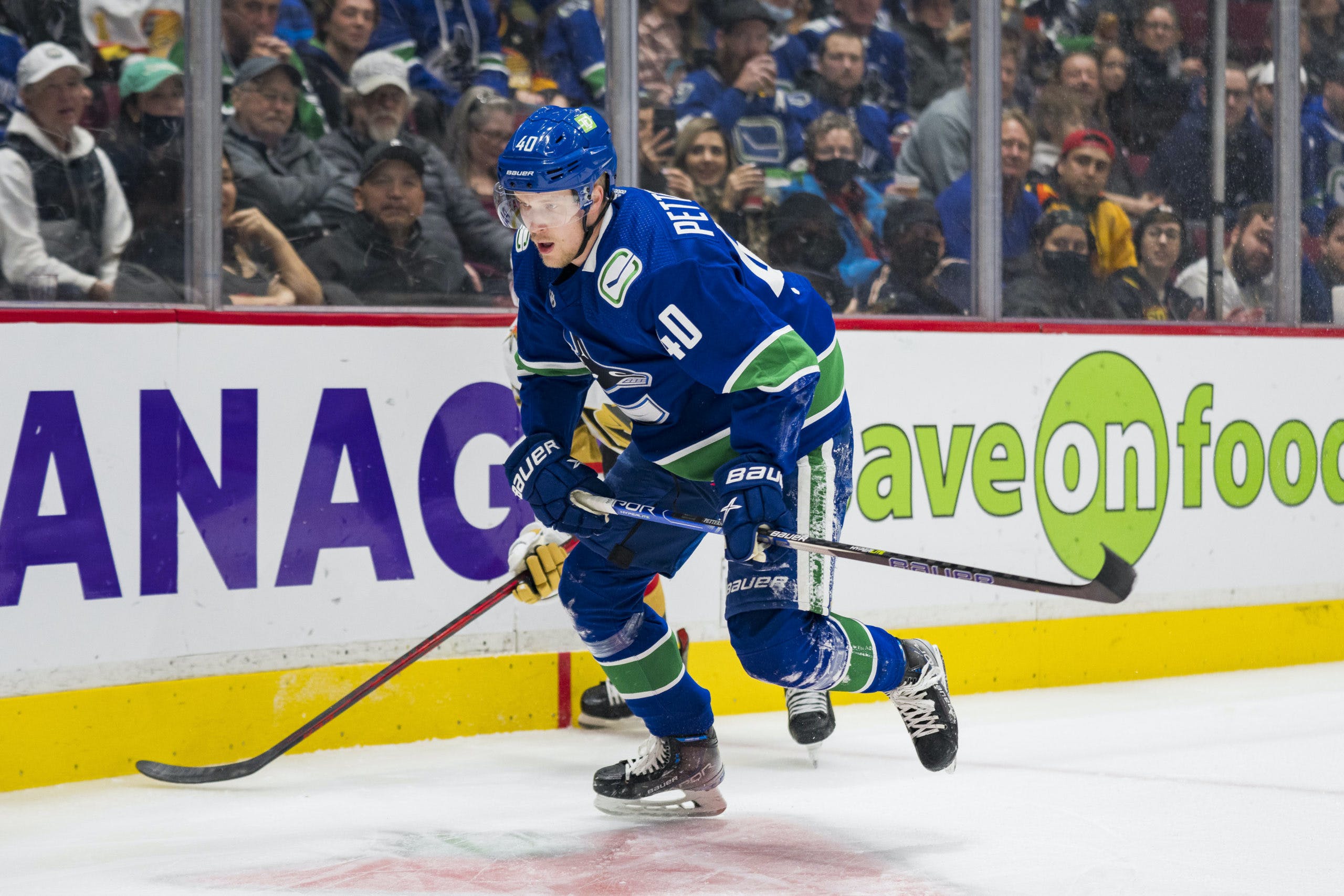 By David Quadrelli
7 months ago
It was the return of Mark Stone to the Vegas Golden Knights’ lineup.
It was a chaotic day with various weather events taking place in Vancouver in the hours leading up to this one.
The Canucks are once again forcing fans to believe in a playoff push, and a win against the Golden Knights certainly kept some of those hopes alive, even if it wasn’t a win in regulation.
Here’s how the Canucks lined up in this one.

Brock Boeser and Tanner Pearson remained out with upper-body injuries, and Thatcher Demko started in goal with Robin Lehner opposite him.
Let’s do this!

The game got started with a bang after Elias Pettersson sprung Bo Horvat for a stretch pass out of the Vancouver end.
The Canucks captain broke into the Vegas end, protected the puck, and after a quick shimmy, baited Vegas defenceman into taking a tripping penalty.
And you know what that means, folks. The Canucks were granted the first power play of this game, and before you even had a chance to complain about Alex Chiasson being on the first unit, Bo Horvat put the puck into the back of the net from his spot.
And wouldn’t you know it, it was Chiasson picking up yet another point on the goal with the primary assist. 1-0 Canucks.
Then Max Pacioretty took an unsportsmanlike conduct penalty and sent the Canucks right back to the man advantage.
As he so often does, Pettersson did some dekes that garnered some oohs and ahs from the Rogers Arena faithful, but the Canucks ultimately weren’t able to convert.
The Canucks were clearly the better team in the opening ten minutes, and for this team, that’s usually half the battle.
The Canucks were assessed a bench minor for too many men on the ice after the officials determined Brad Hunt was a little too early on a line change.
As if they were a bunch of Vancouverites who didn’t know whether they should be wearing sunglasses, snow gear, rain boots, or if they had jumped the gun on taking off their winter tires — the Golden Knights struggled to even get going with the man advantage.
Back at even strength, Demko made one of his best saves of the season off of Jack Eichel, as the Canucks netminder pushed hard off his post to get across and just get his body in front of it.
Once again back at even strength, a weird one went in on Demko after a seemingly innocent-looking shot bounced off of Alec Martinez and in behind the frozen Canucks netminder. 1-1.
As time winded down in the period, Evgenii Dadonov was called for high-sticking Oliver Ekman-Larsson and once again sent the Canucks to the power play. The Canucks couldn’t convert, but had a chance to get started on the right foot with over a minute of power play time remaining to begin the second period.

The Canucks made quick work of the man advantage, and got off on the right foot to start the second period.
After his original redirect attempt from an Elias Pettersson slap pass hit the post, Vasily Podkolzin banged home the loose puck to make it 2-1 Canucks.
Shortly after the Podkolzin tally, Elias Pettersson scored a goal that definitely crossed the line, but the officials had to take a quick look, which was just fine, because it meant we got a Wes McCauley goal call.
Nonetheless, it was a Canucks goal, and that’s all that mattered if you’re a Canucks fan. 3-1 Canucks on Pettersson’s 26th goal of the season.
On the very next play, the Golden Knights struck back with another weird one that deflected in front of a sliding Demko and just snuck into the open net to make it 3-2.
The two teams battled the rest of the period with chances flying back and forth.
Podkolzin was all over the ice creating, and even set up Tyler Myers for a one-timer that the towering blueliner hit the crossbar on.
Elias Pettersson anticipated a Vegas D-to-D pass at the Vancouver blueline and as if he was shot out of a cannon, blazed the other way with Brad Richardson rushing to join him.
Instead of shooting, Pettersson waited until the last possible second and slid the puck across to Richardson, who pulled the trigger and made it 4-2 Canucks.
The key part of that play is anticipating the play at his own blue line. Pettersson is playing with the kind of sustained confidence at both ends of the ice that we just haven’t seen from him since the 2019-20 season.
“I saw they had a four on three and I heard their bench screaming, and I knew I had a guy behind me and I kind of guessed, the guy would pass to him,” said Pettersson post game. “So I just read the play, bounced it off my helmet and went over to Richardson.”
Thanks to Pettersson taking over the game in the second, the Canucks entered the third up by a pair.

The Golden Knights came out flying to start the third period, but Thatcher Demko was up to the challenge early on.
Vegas kept pressing, however, and eventually broke through after Shea Theodore picked his spot and sniped a wrist shot just beneath the blocker and above the pad of Demko.
4-3 Canucks.
The Knights kept up the pressure on the Canucks and had the look of a team fighting for their season. As important as tonight was for the Canucks, it was just as important for Vegas, if not more important.
The Golden Knights had an even better opportunity to tie this one up when Tyler Myers took a hooking penalty with just over ten minutes remaining in this one.
The Canucks killed that penalty off, but the officials didn’t feel like that was enough, as they called Kyle Burroughs for a hooking penalty just moments after the Myers penalty expired.
The Canucks killed off that penalty, too, and continued to bend but not break.
Through 15 minutes of play in the third, the Canucks had mustered just one shot on goal, while Vegas blasted 11 shots on Demko in that same period of time.
Conor Garland set up Elias Pettersson for a doorstep chance but the Canuck forward was absolutely robbed by Robin Lehner.
With 1:44 remaining in the third and his team down by a goal, Lehner vacated to the Vegas bench for the extra attacker.
The Golden Knights cycled the puck, and eventually found Shea Theodore open at the top of the circle to Demko’s left for a one-timer that beat the Canucks goaltender glove side to tie this one up at 4-4.
This one would, somewhat tragically for the Canucks and their playoff aspirations, require overtime.

Pettersson anticipated a Vegas breakout attempt and manufactured a chance late to seal the deal.
On the next shift, Quinn Hughes finished what his good pal started and sealed the victory for the Canucks.
Hughes admitted post game that that goal may have been the biggest of his career, but said he hopes there are many more to come.
Canucks fans certainly share that hope.
5-4 final. He was named the game’s first star for a reason.
After exploding in the second period and taking over the game for his team, vintage Elias Pettersson is tonight’s top performer.
“It’s a good time for good players to be great,” said head coach Bruce Boudreau post game of Pettersson’s play as of late. “He sees the ice so well. On the Richardson goal, he just saw the play developing in front of him and came across to intercept it.
“He’s proven he’s stronger than he looks with the hits,” Boudreau added.
The only thing that would have made Pettersson’s performance even sweeter was if he buried the feed from Garland late in the third to give the Canucks a two-goal lead and, in all likelihood, lock down a win in regulation for his team.
That, or burying the OT winner, but Hughes took care of that just fine.

The Canucks certainly would have liked to pick up a win in regulation, but a win is a win, and the team can’t afford to get down on themselves for squandering a lead late in the third.
The most important thing right now is to win games, and they did just that tonight.
“We would have liked to get the win in regulation, but at the end of the day we still got two points and that’s what we wanted to do,” said Hughes post game.
Pettersson looked like his old self, Quinn Hughes scored an OT winner, and Vasily Podkolzin continues to look dangerous.
If you’re a Canucks fan, what more could you want from tonight’s game?
Don’t say a win in regulation, because yeah, obviously.
Now winners of their last five, the Canucks will be back in action Thursday night when the Arizona Coyotes pay a visit to Rogers Arena.
Uncategorized
Recent articles from David Quadrelli