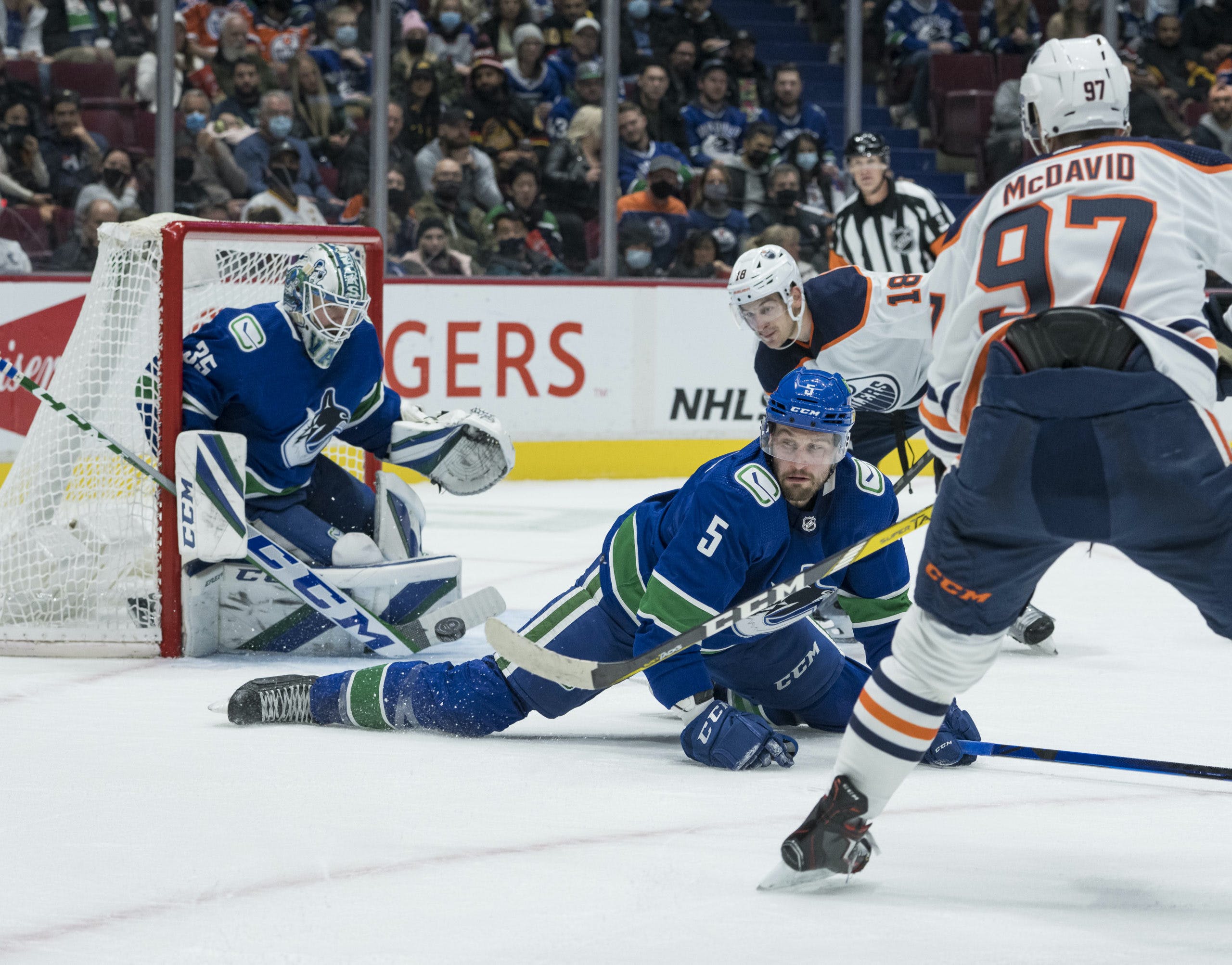 By David Quadrelli
1 year ago
The Edmonton Oilers and their red-hot power play were in Vancouver on Saturday night as the Canucks continued the hunt for their first home win of the season.
42% of the Oilers’ goals have come on the power play this season. This is called foreshadowing, folks.
The Canucks got Jason Dickinson back in the lineup tonight, and Rathbone slotted back in after being a healthy scratch on Thursday night.
Let’s do this!

Elias Pettersson hasn’t looked like himself to begin the new season.
He’s bobbled pucks, had mental lapses at both ends of the ice, and hasn’t looked like the player Canucks fans have come to know and love.
When you talk to those around the team — whether that be Pettersson’s teammates or coaches — the common theme is that everyone fully believes Pettersson is going to turn things around sooner or later.
Tonight, he showed glimpses of his old self.
Pettersson created the game’s first quality chance by breaking out of the Canucks’ end, dangling his way through a couple of Oilers in the neutral zone, and letting go of a wrister on Mikko Koskinen.
Early on in the first, the Canucks’ breakout was actually looking better than it has in recent memory. That didn’t last long, but a lot of the successful breakouts early on were due to Pettersson controlling the play as fans are so used to seeing him do.
Unsurprisingly, Conor Garland appeared to have his legs early on. He had more shots on goal than any player on either team after 20 minutes of play with three.
Nils Höglander left the bench in the first period but returned after missing just two shifts.
Tyler Myers took a hooking penalty at 9:40 of the first and sent the ultra-dangerous Oilers power play over the boards.
Coming into tonight’s game, the Oilers’ power play was clicking at an incredible rate of 43%.
To the surprise of very few, they managed to convert on their first man advantage of the night.
That wasn’t before Thatcher Demko absolutely robbed Connor McDavid, who let go of a perfectly executed one-timer.
At the other end, Justin Bailey caught the Oilers’ breakout crew off guard when he pounced on a loose puck with an incredibly aggressive forecheck and centred for J.T. Miller who ripped the puck wide.
It was a solid moment for Bailey to add to his penalty-killing highlight reel.
Unfortunately for the Canucks, the Oilers managed to convert with just one second remaining on the Myers penalty when Warren Foegle swept a puck past Demko on a broken play in front of the Canucks’ netminder to make it 1-0 Oilers.
Right after the power play marker, Jack Rathbone and Luke Schenn had a miscommunication that nearly led to the Oilers converting once again.
The Canucks struggled to cleanly break out of their own zone and made numerous sloppy giveaways that led to dangerous chances for the Oilers.
Thankfully, Demko brought his A-game once again, and the Canucks escaped the first period down by just one goal.

The second period started off with a bang when Hughes let go of a shot from the side wall which rang off the post and led to a mad scramble for a loose puck that sat dangerously close to the Oilers’ goal line. Pettersson whacked away at it, but an Oilers stick managed to influence the puck to go wide of the net.
The Lotto Line continued their strong start to the second period, when Hughes once again let go of a point shot that led to a loose puck in front of Koskinen.
Then the Lotto Line had the shift that really made you think they’re on the cusp of breaking through.
Not only did they control the zone for an extended period of time against the McDavid line, but they also came this close to tying up the game.
In no way are we trying to say coming close is good enough for the Canucks’ top line that has been incredibly lacklustre to start the new season, but to see them at least getting close and controlling the zone in a manner that gave flashbacks to 2019-20, was a sight for sore eyes.
Justin Bailey was added to Horvat and Pearson’s line with roughly seven minutes remaining. The 26-year-old forward, who has been described numerous times as the faster player in the AHL, used his trademark speed to pickpocket Darnell Nurse along the wall before centring the puck for Horvat and Pearson, neither of whom could get the puck to cooperate.
Surprise surprise, the Lotto Line spent another shift in the offensive zone. They were knocking on the door once again, but couldn’t find the back of the net.
Garland had one of the best shifts by any Canuck this season with about five minutes remaining in the second. He put the Oilers in the proverbial spin cycle as he twisted his way away from danger numerous times. When he finally got knocked to the ice and off the puck, he sprung right back to his feet to cleanly puck off the Oilers’ attempted breakout.
Oliver Ekman-Larsson took a two minute penalty for high sticking with just over two minutes remaining in the second, sending the ever-dangerous Edmonton power play back to work.
The Oilers managed to get a prime look in close for Leon Draisatil within just seconds of the power play starting, but the puck was unintentionally blocked by Zach Hyman.
Draisatl got another opportunity, and this time, didn’t miss. 2-0 Oilers.
The Oilers’ power play: it’s good, folks.

The Canucks needed to come out firing in the third, and needed their top gunners to finally break through.
Most importantly, they needed to stay out of the box.
As has already been mentioned, Demko was sharp in this one, and he was tested early in the third.
Horvat, Podkolzin, and Garland were put together for a shift and generated a couple of good chances on their first shift as a trio.
Garland was especially sharp in this one, and was a big reason this line managed to string a couple of chances together.
Connor McDavid turned on the jets and blew past Luke Schenn, and then shortly after, found himself in alone on Demko once again.
In case it wasn’t abundantly clear already, Thatcher Demko showed just how important he is to this team once again tonight with saves like these.
The Lotto Line continued to go toe-to-toe with the McDavid line, but didn’t control possession against Edmonton’s top line the way they did in the second.
Quinn Hughes defended incredibly well in this one, and did a good job to keep the time and space allotted to McDavid’s line to a minimum.
Down by two with just over six minutes to go, the Canucks began to shorten their bench as they hunted a goal. Ekman-Larsson and Hughes found themselves on a pairing together as the Canucks thought with a pure offensive mindset.
With 4:11 remaining in the third, J.T. Miller circled with the puck in his own end.
He waved to Thatcher Demko to go to the bench. It didn’t appear that Demko had yet been summoned to the bench, but the went anyway.
Then Darnell Nurse took a cross-checking with three minutes remaining.
Jason King was extremely vocal during the stoppage in play as the Canucks tried to draw something up in a hurry.
The Canucks cycled the puck around and generated some quality chances. Unfortunately for the Canucks, Koskinen was saving his best for last.
The Oilers goaltender made two huge saves that undoubtedly left Peter Chiarelli — the man whose final piece of business as Edmonton GM was to sign Koskinen to his current headscratcher of a contract — smiling.
With five seconds remaining, Brock Boeser corralled the puck, and in one swift motion, broke up Koskinen’s shutout with the 100th goal of his NHL career. 2-1 Oilers.
Unfortunately for the Canucks, they just ran out of time in this one. 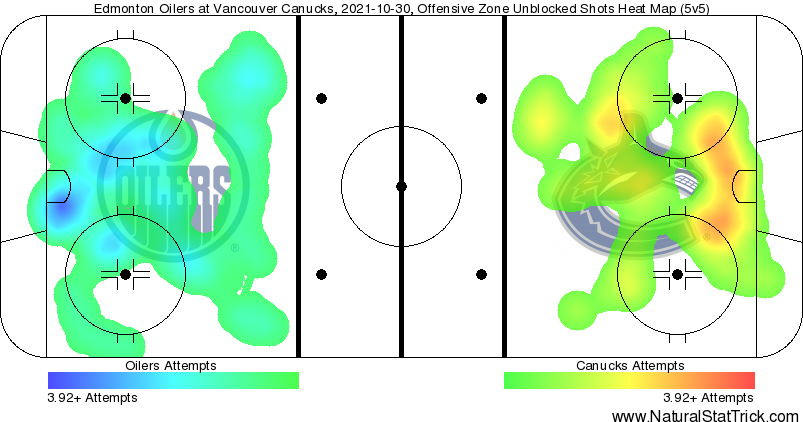 The Oilers’ power play increased its power play conversion percentage to 47.8% on the season. That’s almost a coin flip of whether or not they’re going to convert when given the opportunity on the man advantage.
The Canucks just couldn’t get the job done tonight, and as captain Bo Horvat said, that’s just not good enough.
Playing well defensively and generating quality chances is a great starting point, but you can only pick up moral victories for so long before it becomes too hard to catch up in the standings.
The Canucks will be back in action on Tuesday night when they welcome the New York Rangers for game four of this seven game home stand.
Uncategorized
Recent articles from David Quadrelli