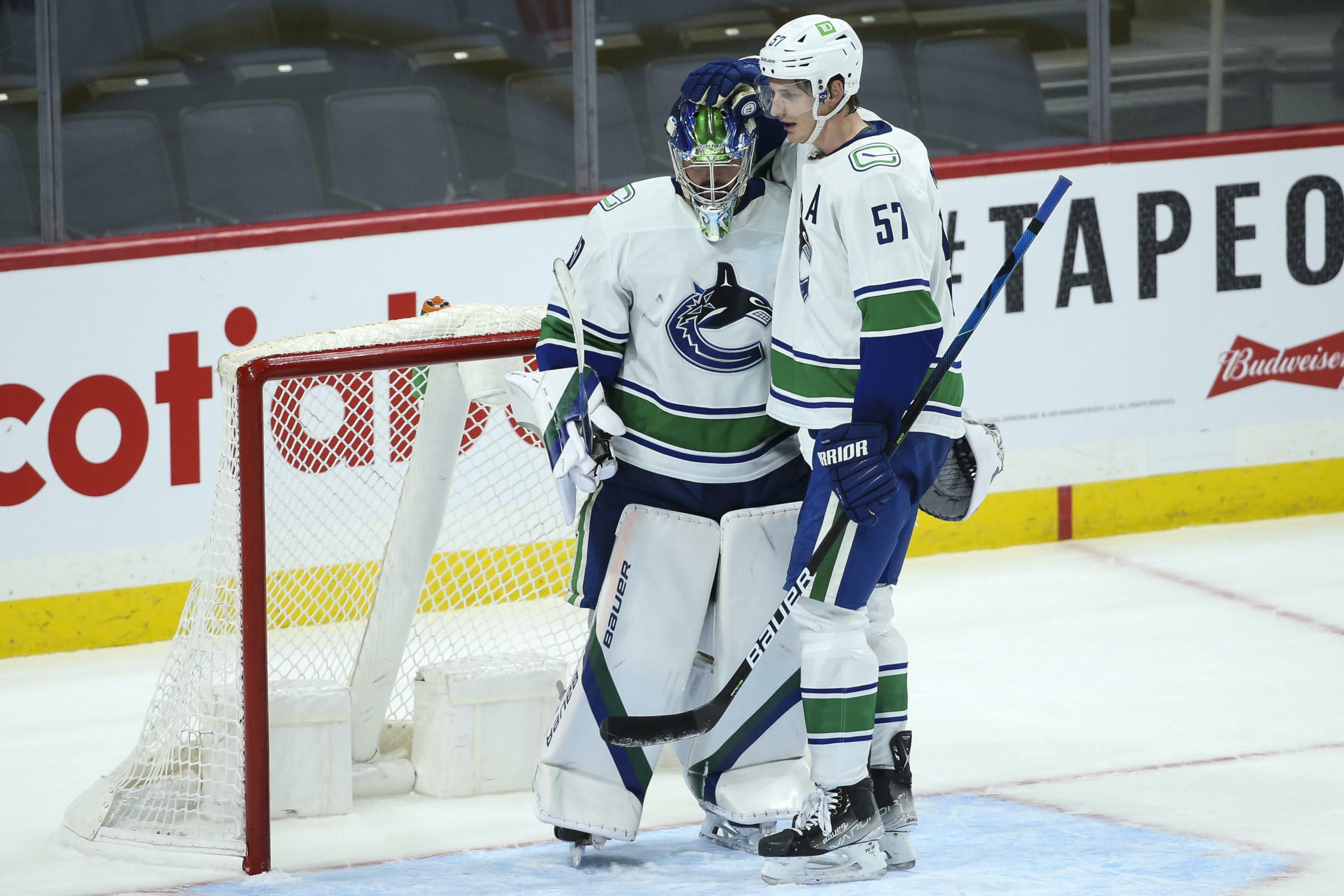 By Faber
1 year ago
The Vancouver Canucks took to the road once again as they kicked off a four-game road trip that would ultimately lead them into the all-star break. The trip began in Winnipeg against the slumping Jets who were on a five-game losing streak coming into Thursday’s game.
The Canucks once again gained back a top-six player out of COVID protocol as Conor Garland jumped back into the lineup. This was a big boost the lineup and you could see the top-six group feel more like a top-six unit with Garland’s return. Theoretically, this would make it easier on the ice time and added responsibility given to the line of Tyler Motte, Juho Lammikko, and Matthew Highmore. That trio has been great of late but are much better contributors when they are used in a role that matches their skill level instead of being top-six players.

Spencer Martin was back in the crease and the Canucks looked to get him the first win of his stretched NHL career. As for the Jets, their all-star goalie Connor Hellebuyck went between the pipes as the Jets were going to throw all they could at this Canucks’ team.
It was an earlier, 5 pm puck drop and we better get to the game!
Let’s go!

It was a pretty slow beginning to the game and there was a weird feeling in the arena. The Jets are only allowing 250 people in the arena so the crowd was very empty but had scattered pockets of fans throughout.
The pace picked up at the five-minute mark and both teams had a couple of good shot attempts from the point that tested each goaltender. J.T. Miller had a bad giveaway that gave the Jets a quality scoring chance as Martin was tested from a one-timer from the slot.
There were a couple of good defensive plays in the middle part of the period. Brad Hunt had a nice hip check to shutdown a rush by Adam Lowry. Vasily Podkolzin made a good play in the neutral zone that led to a scoring chance where Miller just missed the corner on a wrist shot.
The first penalty came to Ville Heinola when he cross-checked Elias Pettersson in front of the net with 6:47 remaining in the period.
The Canucks went to work and struck quickly. Pettersson stepped down the left wing, sent a pass down low to Brock Boeser who made a snap pass to Miller in the bumper where Miller ripped a one-timer into the back of the net. 1-0 Canucks.
It was Miller’s 13th goal of the season as the Canucks got a much-needed power play goal in the first period. The Canucks took the momentum after the halfway point of the period passed but the Jets were able to strike with 4:28 remaining.
Andrew Copp hit a loose puck out of mid-air while he was near the left side of the crease. His redirection tied the game up. 1-1 after the Copp goal.
The teams traded shots from distance to close out the period. They skated off in a draw after 20 minutes.

The trio of Miller, Boeser and Podkolzin looked good in the offensive zone and saw a boost in their possession time due to the fact of playing a lot of their first period minutes with Quinn Hughes. As the line spent time in the offensive zone, Hughes was jumping into the cycle and looked great while running a two-man cycle with Miller as they looked for Boeser or Podkolzin for tap-ins.

Tucker Poolman left the bench early in the period. Podkolzin had a strong wrist shot from the slot just two minutes into the period but Hellebuyck was able to shimmy his shoulder in the way to keep it out.
Shots were flying at Hellebuyck throughout the beginning of the period and a quality shot came when Boeser carried the puck across the blue line and passed it from left to right across the ice to Miller. Miller didn’t hesitate and fired a shot that went top corner. 2-1 Canucks.
Highmore took a tripping penalty with 14:24 remaining in the period and that sent the Jets to their first power play of the game. Miller had the best chance of the power play as he walked in and deked to the backhand but was denied his hat trick by Hellebuyck.
The penalty expired but Tyler Myers took a penalty just as the initial penalty expired. The Canucks were right back to being shorthanded.
It was another strong kill for the Canucks as they got back to five-on-five and went right back on the attack. It was clear who the best attacker was as Miller had a two-on-one with Podkolzin where he held the puck just a tad bit too long.
Right after the odd-man rush, Miller came down the left side, found some open ice in the slot, and wired a wrist shot right through Hellebuyck for his hat trick goal. 3-1 Canucks.
Miller was taking shots from all over the ice just as Bruce Boudreau wants from his star players and he was being rewarded for his efforts.
The period saw a couple of chances in the final few minutes but the game seemed to be all about Miller.

Let’s go to the fans…
It was a wild few minutes on Twitter. That’s for sure!

Pettersson tipped a shot into the post early in the period and then Nils Höglander drove the net hard and drew a high-sticking penalty.
It took the Canucks 10 seconds to score on their first power play and it took even less time on the second as it was only seven seconds before Boeser smacked home a loose puck that was bouncing around outside of the crease. It was the Canucks’ fourth goal of the game and they took a commanding lead. 4-1 Canucks.
With Poolman out of the lineup, we saw some mixing-up of the defence pairings. Hughes had some time with Brad Hunt but the pairing of Oliver Ekman-Larsson and Tyler Myers spent a lot of time together in the third period even with Poolman’s absence.
Boeser took a tripping penalty that gave the Jets a chance to get back into this game as the midway point of the third period approached. The Canucks were able to kill off the penalty and maintain their three-goal lead.
Adam Lowry landed a stiff hit on Hughes, and Luke Schenn stepped in and dropped the gloves as he stuck up for the Canucks’ young star defenceman. Good quality stuff from the veteran Schenn.
Podkolzin was moved off of the Miller line in lieu of Alex Chiasson in the third period. Miller was taking some extra long shifts as it was clear that he was giving a little extra effort to get that fourth goal.
Boudreau wants his stars to shoot the puck more and Pettersson absolutely ripped a wrist shot into the back of the net with six minutes remaining. 5-1 Canucks.
Podkolzin made his way back onto the Miller line as the Johns on the broadcast lamented about how Höglander and Podkolzin didn’t get many minutes in the third period.
The seconds ticked off the clock and on the back of Miller’s hat trick, Spencer Martin secured his first NHL win in a 5-1 victory.

Easy, he scored a hat trick in this one and was dominant on most of his shifts. J.T. Miller takes home the top performer as he added an assist to his three goals for a four-point night.

It was a big night for Miller and a big night for Spencer Martin, who once again only allowed one goal in this game. He wasn’t asked to be extraordinary in the game but did make 33 saves on 34 shots.
“It’s incredibly special,” said Martin. “I don’t know if it’s sunk in yet but hopefully we can just build off of it. It’s a really special day for me. We did a really good job of controlling scoring chances. It felt like a really controlled environment, we played an awesome game.”
Boudreau was in his usual good mood after a big win and was looking forward to keeping the wins going for this team.
“Anytime you can get your offensive weapons back, it’s a good feeling,” said Boudreau. “We played so hard [in the games without Garland and Miller], getting 40 shots on goal and outshooting them. When we get those guys back it can show that we can defend and can score.”
Boudreau also spoke on Miller and his success on the night.
“He could have had two more tonight,” said Boudreau. “I thought he could have had five.”
The Canucks are back in action on Saturday with the final game of hockey day in Canada as they face-off against the Calgary Flames.
Uncategorized
Recent articles from Faber