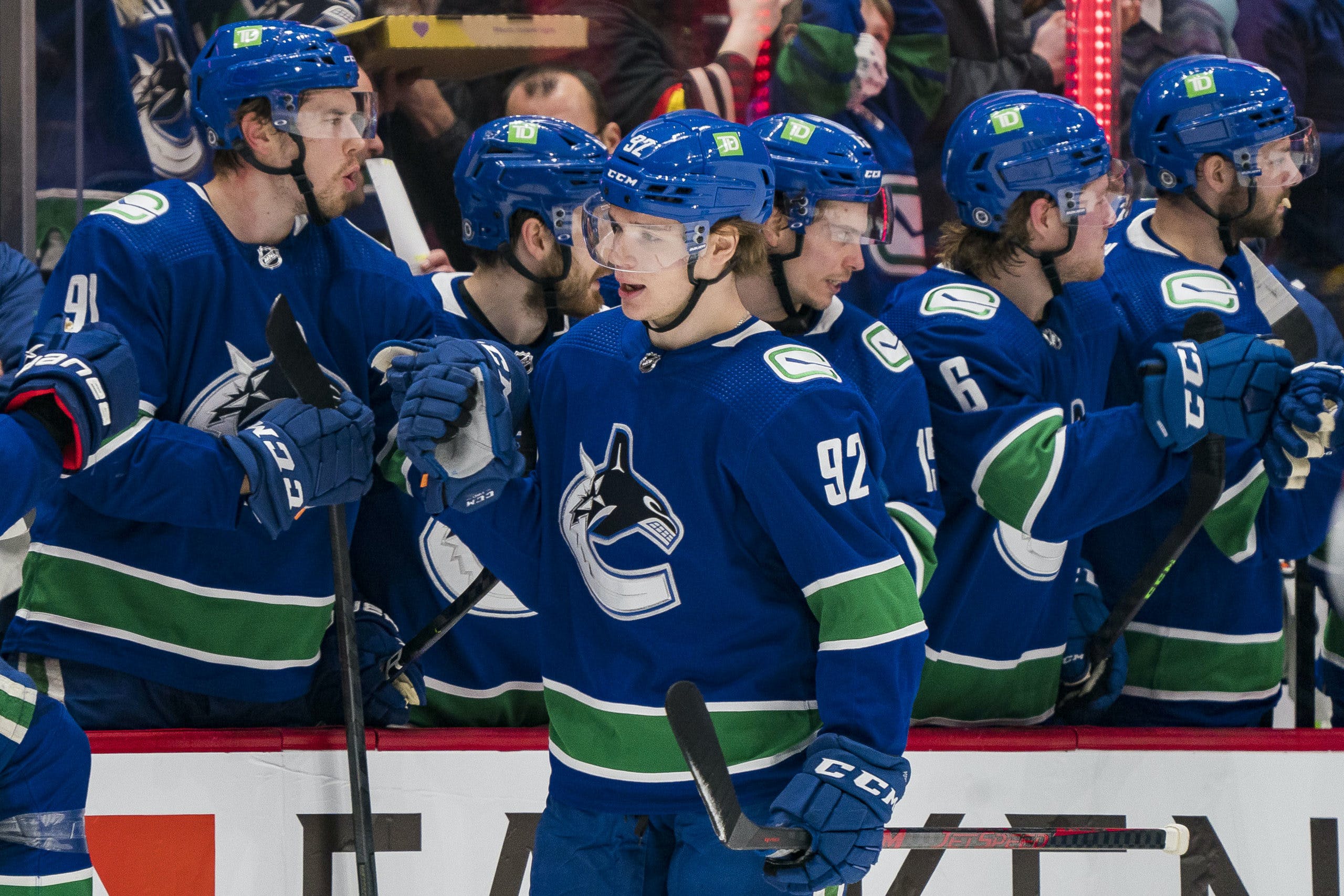 By David Quadrelli
11 months ago
Monday morning after his club’s gameday skate, Vancouver Canucks head coach did everything but flat out call tonight’s tilt against the Seattle Kraken a must-win game.
The Canucks had a golden opportunity to gain some ground on a Pacific Division team ahead of them in the playoff race and completely flubbed it Saturday night when they turned in a stinker against the Anaheim Ducks.
They squandered that opportunity, but got some help on the out-of-town scoreboard as the Edmonton Oilers and San Jose Sharks both lost in regulation Sunday evening.
Thus, tonight’s game against the Kraken felt like as much of a must-win game as the Canucks have played this season.
“We need a win if we’re going to stay in this race,” said head coach Bruce Boudreau pregame.
Let’s do this!

Boudreau elected to change up his lineup a bit.
J.T. Miller returned to centre on a line with Tanner Pearson and Conor Garland, who combined for four points in the loss to the Ducks. Miller’s previous linemates, Bo Horvat and Brock Boeser, were bumped onto a new unit with Jason Dickinson, who’ll be making a rare shift over to the left wing.
Thatcher Demko started in goal after getting the yank on Sunday evening after allowing five goals on 14 shots. Chris Driedger started opposite him.

In the interest of not allowing his team to slow start their way to five unanswered goals again, Tyler Motte tucked home a neat below the goal line pass from Juho Lammikko to make it 1-0 Canucks just 11 seconds into this one.
Tyler Myers — somewhat miraculously — misplayed a puck and turned a seemingly low-danger play into a 2 on 1 that Demko had no chance of stopping. Jared McCann (remember him?) tucked home the cross-crease pass and tied this one up 1-1.
Did you even have your snacks yet!?
During the first TV timeout, the Canucks took another opportunity to highlight the incredible act of kindness from Nadia Popovici, who spotted skin cancer on Canucks assistant equipment manager Brian Hamilton’s neck and pointed it out to him during the Seattle Kraken’s home opener.
The Canucks played a video, then revealed that Popovici was invited to tonight’s game, sitting right behind the Canucks’ bench. The building erupted in applause when she was shown on the big screen.
The Canucks continued to keep up the pressure on the Kraken, and curbed the trend of being down on the shot clock early.
And against a team as bad as the Kraken, they needed to.
Bo Horvat took a holding penalty with just under eight minutes remaining in the first and sent the Lralen onto the game’s first power play.
With six seconds remaining on the Kraken power play, Vince Dunn took an interference penalty. The sequence began at 4 on 4 but Joonas Donskoi found Mark Giordano with a neat flip pass that led to a breakaway in which the Seattle captain tucked home easily. 2-1 Kraken.
The Canucks’ remaining power play was so bad that after failing to get set up on multiple occasions, the boo birds came out at Rogers Arena for the first time since Jim Benning was still the GM of this team.
The Canucks were certain to get a “pep talk” from Boudreau in the first intermission after that effort.

Travis Hamonic scored after getting set up by Juho Lammikko four minutes into the second frame. Seattle’s defence was likely most to thank for the goal, but Hamonic scoring his first of the season and 200th career point was still a big momentum swing for the Canucks.
Jamie Oleksiak took a penalty and sent the Canucks to their second power play of the game — and this time, thanks to them not failing completely to even get set up — there were no boos at the end of this power play!
There was a moment shortly after in which nobody — except for four players on the ice (two Canucks and two Kraken) — knew where the puck was.
“I was in the pile for it along the boards,” said Tyler Motte. “I think I tried chopping it out, not sure if it got out on the first one or not. Kind of just hacking and whacking at it and the ref came in and is like ‘it’s gone, it’s gone!’ That probably went on for about five seconds. I don’t think eight guys on the ice knew it was quite there [up ice] and look up and those guys are crossing in the offensive zone on a two on two, so weird sequence.” 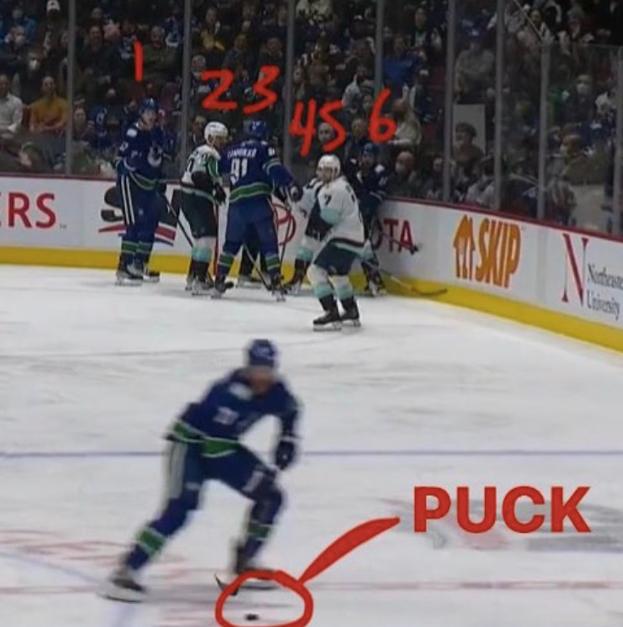 Thatcher Demko made his biggest stop of the night to that point when he robbed Donskoi point-blank and sent the Canucks rushing the other way. Elias Pettersson got a shot off but it was blocked by the Seattle defenceman.
This one was tightly-contested, and the Canucks’ fourth line was by far their best one.
Lammikko was absolutely dishing tonight and set up Tyler Motte for another grade-A opportunity with a hard tape-to-tape pass through traffic. Unfortunately, Motte was robbed, but that certainly didn’t take anything away from how effective the Canucks’ fourth line was tonight.
“They do what you ask them to do,” said Bruce Boudreau post game. “They can all skate. They pressure, pressure, pressure. Where they used to just hold their own, now they’re starting to score goals. That makes them even more valuable.”
Quinn Hughes set up Vasily Podkolzin with a hard pass right to the front of the net, and the young Russian made no mistake in burying the puck past Chris Driedger. 3-2 Canucks.
“I was so happy for him. He tries so hard, and he works so hard,” added Boudreau. “You love the young guys that work hard, and he always works hard.”
Bo Horvat took a slashing penalty with just over two minutes remaining in the second and sent the Kraken back on the man advantage.
The Cnaucks did well to limit the Kraken’s opportunities, and then Travis Hamonic drew a tripping penalty to give the Canucks an opportunity at 4-on-4 for 19 seconds and a late power play opportunity.
In the second, the Canucks had 18 shots and Seattle recorded just four. After two periods, the Canucks led 33-13 in shots.
They entered the third period with a 3-2 lead.

The Canucks started the third with just under a minute of power play time remaining, and made good on it.
Bo Horvat rifled home a shot from the bumper position for his 15th of the season after being set up by J.T. Miller. 4-2 Canucks.
Elias Pettersson recorded his second assist on the night on the goal — but more on him later.
The Canucks continued to keep up the pressure on Seattle and had a chance to pull ahead even further when the Kraken took a bench minor for too many men on the ice five minutes into the third.
The Canucks didn’t manage to convert, but with the shot total reading 40-20 in their favour at the halfway mark of the third, it appeared as though the Canucks were in the driver’s seat.
Brad Hunt took a penalty with just over eight minutes remaining and made this one a bit more interesting than it had to be.
The Canucks managed to kill off the penalty with some big stops from Thatcher Demko, and were once again focused on closing this one out.
Matthew Highmore had his turn at making things more interesting when he took an interference penalty with a hair under five minutes remaining in this one.
As he so often does, Thatcher Demko came up big, and with just over two minutes remaining, Seattle called a timeout and pulled their goaltender in a last-ditch attempt to pot two goals and stage a comeback.
Tanner Pearson scored an empty net goal after Seattle hit the crossbar at the other end to finally ice this game on the Canucks’ 46th shot of the night. 5-2 final. 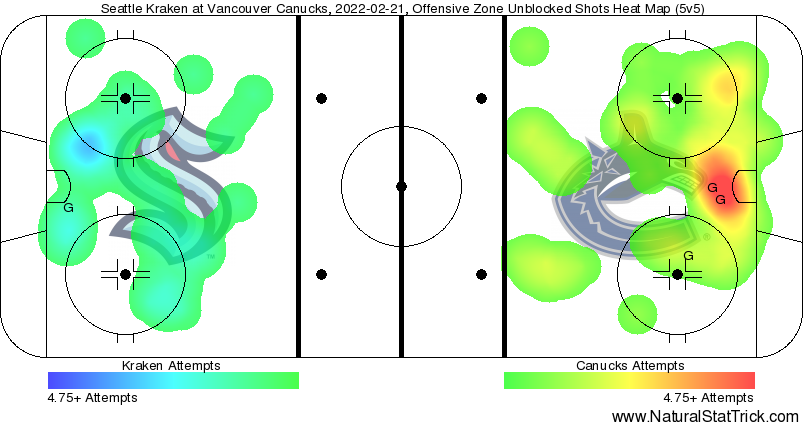 Don’t look now, but Elias Pettersson has 17 points in his last 15 games. That production better matches what Canucks fans — and management — expect from him.
“I feel great. I think I’m creating a lot. I feel like myself out there. I’m playing with confidence,” said Pettersson post game. “It’s fun. I’m playing with confidence. I’m playing like I always have, I think. Maybe things are going more my way now, so that definitely helps.”
The Canucks didn’t exactly do it in commanding fashion, but they got the job done against a team they absolutely should have beaten.
As Boudreau alluded to this morning, this had all the feels of a must-win game, and was arguably the most important win of the Canucks’ season.
And they’ll likely all be like that the rest of the way out, too.
The Canucks will next be back in action Thursday night when the black skate jerseys make their one and only appearance this season against the Calgary Flames.
Uncategorized
Recent articles from David Quadrelli