CanucksArmy post game: Höglander puts on a possession clinic in a 3-2 preseason win over the Jets 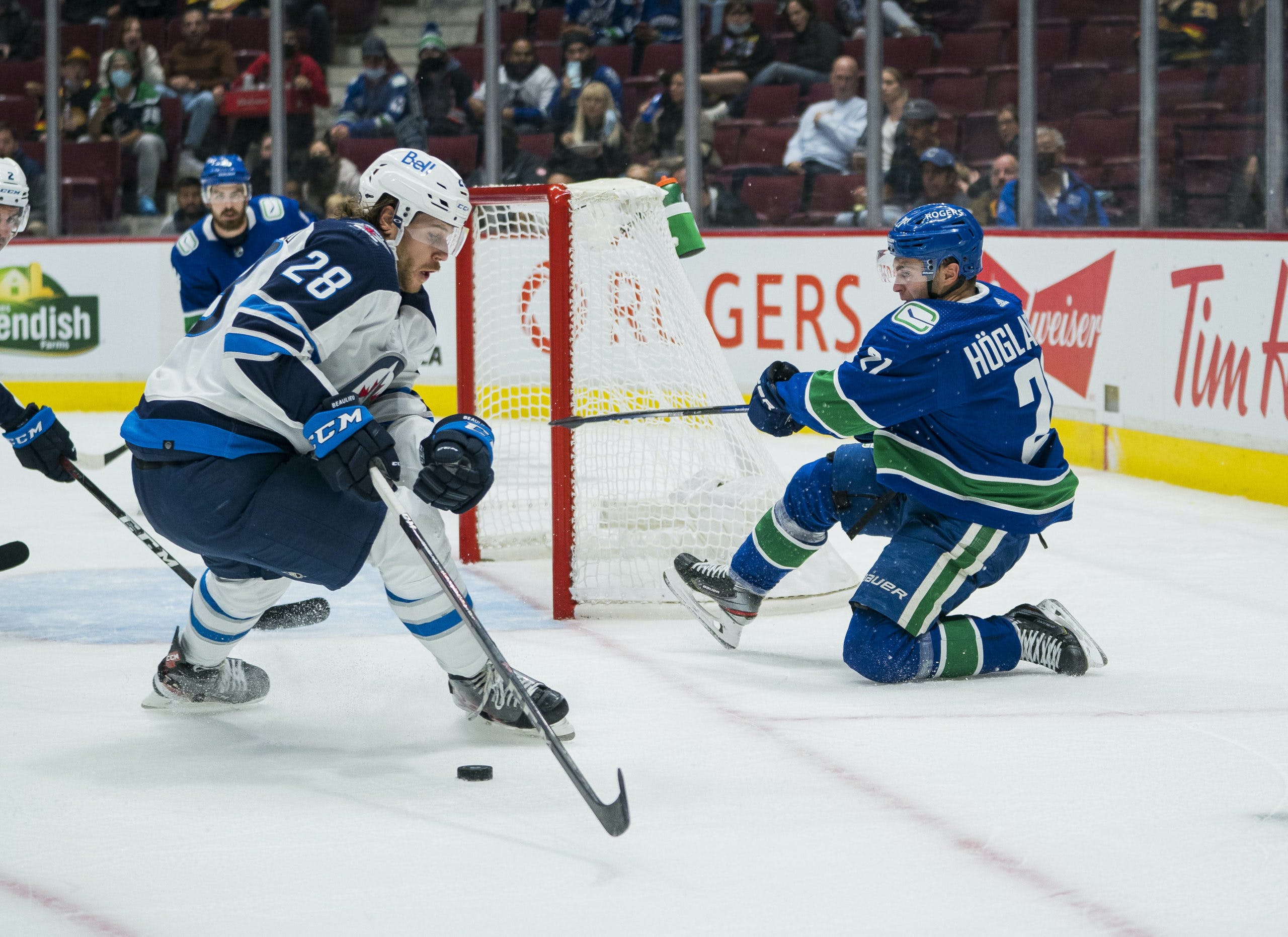 By Faber
1 year ago
Though the score tells you it was a tight game, the Canucks’ possession domination definitely tells another story in a 3-2 win over the Winnipeg Jets.
The Canucks had an NHL-heavy lineup as the team prepared to announce cuts on Sunday evening.
The Winnipeg Jets were in town for the Canucks’ fourth game of the preseason.
Jaroslav Halak got the call to the crease for the Canucks and the Jets put Mikhail Berdin between the pipes.
The Podkolzin-Miller-Garland line was no more as head coach Travis Green drastically shook up his lineup.

Nils Höglander was back with Tanner Pearson and Bo Horvat on Sunday as he was for so many games last season.
Vasily Podkolzin found himself on a very young fourth line alongside training camp standout Will Lockwood. This trio was rounded out by Carson Focht and needed to show energy on every shift to have success.
It was also our first look at Halak in a Canucks uniform as he got the call with Mikey DiPietro backing up.
It’s game time, so you know what’s next.
Let’s go!

It was clear that the Jets had a weaker lineup after many of their NHL regulars played in their previous preseason game.
Höglander beat out an icing call and forced Berdin to play the puck. Pearson pounced on the puck and centred the puck to Horvat who fired a shot from the slot that found its way through Berdin. 1-0 Canucks.
Will Lockwood was showing his worth as he had a very physical start to the game. The combination of himself and Podkolzin gave the fourth line a ton of energy.
The Canucks went to their first power play with 10:56. Alex Chaisson was once again on the first unit power play with Oliver Ekman-Larsson at the point.
OEL hit the post on a snap shot and then had another good shot on net just seconds later. Nic Petan was on the right side of the power play and he also hit the post as the first unit dominated. They had four shots on net, hit the post twice but couldn’t muster a goal.
The Jets took the momentum from their penalty kill and went back the other way to get a goal of their own. Halak made a glove save from the point but the puck fluttered into a dangerous area. Jeff Malott found the loose puck and buried it from the right side. 1-1 after the Jets’ goal.
Through the first 15 minutes, the Horvat line was dominating possession when they were on the ice. Höglander looked strong on the forecheck and he was absolutely flying around the ice all night long.
The Canucks took a too many men on the ice penalty with 54.9 seconds remaining in the period. They had a great offensive shift preceding the penalty but had a bad change as they went to re-enter the zone.
The Canucks were able to kill off the first bit of the penalty up until the period finished.

Nils Höglander looked excellent in the first period. He was flying around the ice, had a quick stick in puck battles and was using his low centre of gravity to play physically. His Corsi was perfect in the first period as he was on the ice for 11 shot attempts and did not have a shot attempt against. He dominated possession.
Another young player who looked solid was Jack Rathbone. He was skating well and making good passes to gain the offensive zone. Rathbone was matched up with Madison Bowey on a pairing and they looked solid in the first period against the weak Jets lineup.

The Canucks killed off the remainder of the penalty and then went right back to work dominating possession against the Jets.
After a scuffle around the crease, Conor Garland took a Jets player to the box and we were set for some open-ice four-on-four.
The Canucks had a strong four-on-four passing play between J.T. Miller and Madison Bowey. Bowey found Petan in the slot and he fired a puck into the top corner to give the Canucks a 2-1 lead.
Shot attempts at the midway point were 32-11 in favour of the Canucks. That should give you a good indication of the dominance that we were seeing from the Canucks.
Di Giuseppe took a knee and the Canucks were back to the power play. He was fine but wasn’t happy with the Jets player throwing out his leg in a dangerous play.
The Canucks second unit had the best chance of the power play when Höglander couldn’t quite get possession of the puck on the right side of the crease.
Lockwood took a high stick and bled as a result. That sent the Canucks to a four-minute power play.
The first half of the power play was a struggle. They weren’t able to gain the zone with ease until the second unit came out with Höglander leading the way.
It wasn’t a great showing on the four-minute power play as they struggled to generate a single scoring chance.
The period came to an end and it was a choppy one with penalties slowing up the flow in the middle frame.

Even though he was not tested often, Halak looked solid in the period as he faced two quality scoring chances against. He made a big save after a Rathbone turnover and was strong in this sequence on Evgeny Svechnikov.
Höglander continued to impress as he was standing out once again. His feet were moving and he was dangerous on multiple occasions in the period.

Mikey DiPietro was swapped for Halak to begin the third period.
Höglander continued his good game as he drew a holding penalty while driving to the net. The Canucks went to another power play early in the period.
They had a few shots on net but were unable to score, making them zero-for-five on the night.
Kyle Burroughs took a cross-checking penalty with 15:43 remaining in the period. Nic Petan had a couple of good defensive plays while shorthanded and the Canucks killed off the Jets’ power play.
The Canucks finally broke through with 7:25 remaining in the period. Höglander forced a turnover and made a good pass to Horvat, who got a shot off before the loose puck was picked up by Pearson and fired into the back of the net. 3-1 Canucks.
DiPietro wasn’t tested often but he made a big glove save off a backhand attempt late in the period.
The Jets ended up beating DiPietro off of a faceoff. Kristian Reichel ripped a wrist shot through a crowd and found the back of the net to cut the lead down to one. 3-2 Canucks after the Jets’ goal.
OEL took a high stick and the Canucks got their sixth power play opportunity with 2:34 remaining.
The Jets pulled their goalie with 1:54 remaining and Justin Dowling took a holding penalty with 1:44 remaining to give the Jets a five-on-four advantage with their net empty.
As the Jets took to the power play, they had good possession and DiPietro ended up making a good save sliding across on a one-timer.
Evgeny Svechnikov and Bo Horvat took roughing calls with 37 seconds remaining and they were off the ice for the final stretch of play. The Jets had 37 seconds of a six-on-four but the Canucks held on with a couple of good clears from Di Giuseppe.
DiPietro held tight in the final frantic frames of the game and the Canucks skated off with a 3-2 win.

DiPietro looked good and only allowed the rifle of a shot off a faceoff past him. He was moving from side to side and picking up pucks through traffic with confidence. He is going to be one hell of an AHL starter this season in Abbotsford.
The Höglander-Horvat-Pearson line continued to roll in this game and they were rewarded for their strong forechecking efforts. It will be interesting to see what Green takes away from this game because that was the best performance we have seen from a line halfway through the preseason. 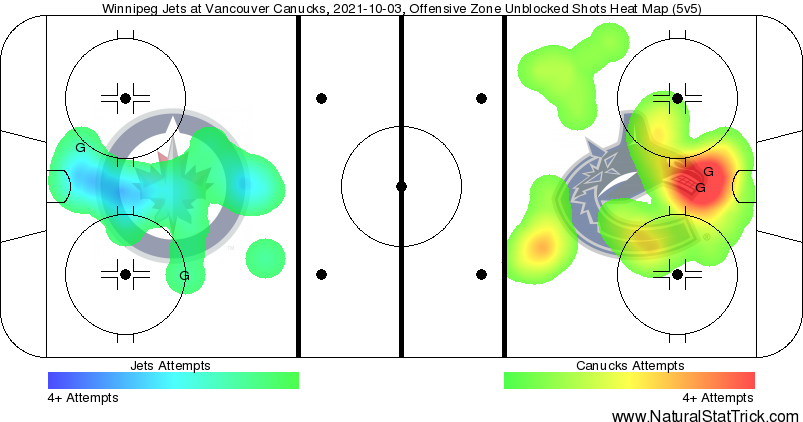 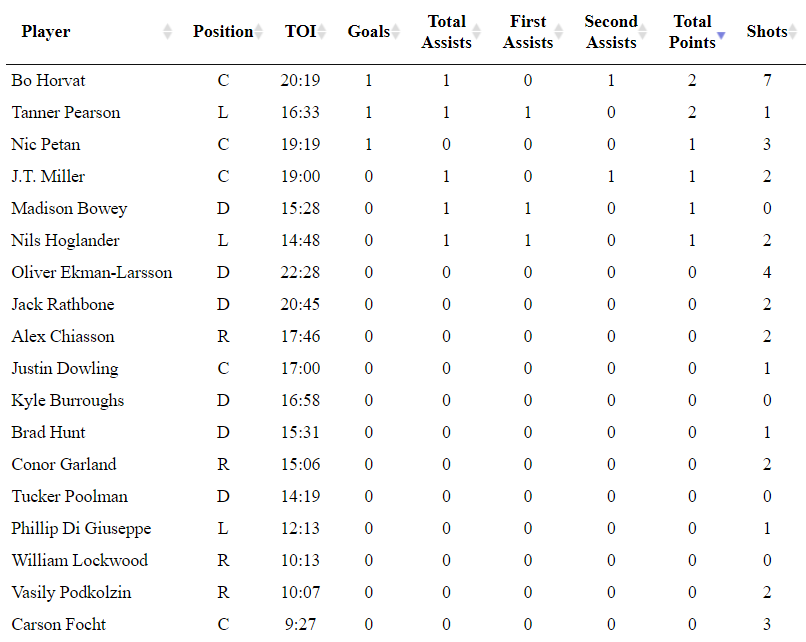 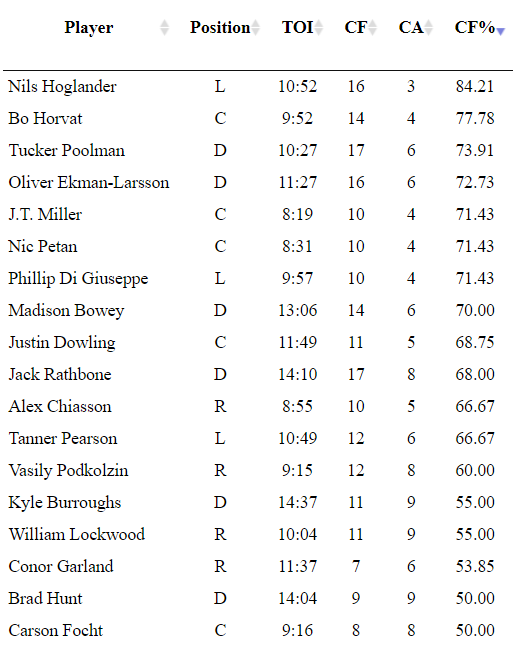 The best player on the ice tonight was Nils Höglander. He had a primary assist on the night, played 14:48 and had an 84.2% Corsi percentage. Höglander was dynamic offensively as he extended time in the attacking zone. He was also strong defensively as the Jets only had two shots on goal during his five-on-five ice time.
Bo Horvat looked good throughout the game as well. He notched two points on the night and was effective from the opening puck drop to the final horn. He got into some rough stuff late in the game but was excellent in the offensive zone on a line with Pearson and Höglander.

The Canucks may have let their foot off the gas a bit in the third period once again but held on for the victory after a goalie change for the third period and a clutch goal in the final stanza.
As mentioned throughout the post game report, Nils Höglander was exceptional in the game. He excelled in all three parts of the ice. He simply looked a step faster than everyone else on the ice and this is a good showing for the sophomore who is looking to land a top-six spot on opening night. Horvat was asked about Höglander in the post game and had glowing reviews for his defensive play.
“He’s always going to be fast, he’s always gonna be hard on pucks and be shifty,” said Horvat. “Just from what I’ve been watching this preseason, I think he’s taking care of his own end. He hasn’t turned as many pucks over and I think he’s starting to figure out that there are two sides of the game and he showed that this preseason.”
Travis Green was also asked about Höglander’s strong performance. “I can’t say yet if he’s better than he was last year,” said Green. “I talked to him a couple of times in the last few days. I don’t think he was very good last game. I thought he responded with a better game tonight. He looked a lot more like the player that we need him to be. He was a lot more energized. He skated better tonight, was first on the puck and was winning puck battles. He was good tonight.”
As the 20-year-old Swede heads into his second NHL season, there are expectations after what he did last year. He was second on the team in even-strength scoring, trailing on Brock Boeser. We have seen Höglander be on a line with Boeser through camp and the preseason but now with Elias Pettersson back in the mix, it will be interesting to see if Höglander skates along with his fellow young countryman.
The Canucks are back in action on Tuesday when they host the Seattle Kraken for the first time at Rogers Arena.
Pettersson and Quinn Hughes are not expected to be in the lineup as to Green’s comments in the pregame availability.
Uncategorized
Recent articles from Faber