CanucksArmy post game: Garland gets the goal and the gears as the Canucks lose in a spirited bout against the Red Wings 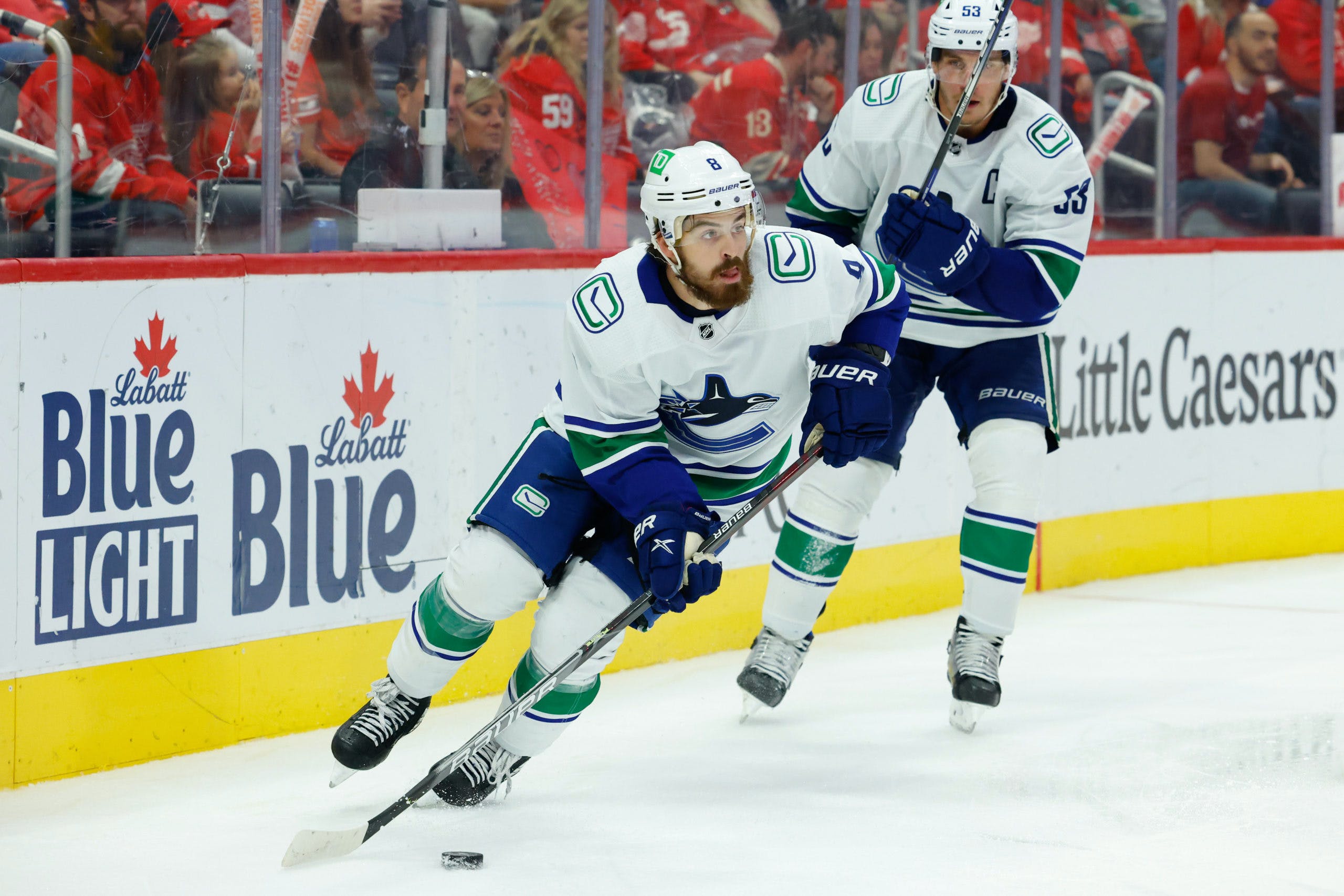 By Faber
1 year ago
The Vancouver Canucks continued on with game three of their season-opening six-game road trip.
They had a Saturday evening affair against the Detroit Red Wings. After a couple of horrific seasons, the Red Wings have an improved roster with young, skilled defencemen like Filip Hronek and Moritz Seider.
As for the Canucks, they returned with the exact same lineup as Friday night with the only change being Jaroslav Halak making his debut for the Canucks in place of Thatcher Demko. Thomas Greiss got the call for the Wings in the crease.

As expected, Nils Höglander moved up to play with J.T. Miller and Elias Pettersson on the first scoring line.
The defence pairings stayed the same. That came as a bit of surprise after a game just one night before. Jack Rathbone and Kyle Burroughs continue to hold down the fort on the third pairing with veterans Brad Hunt and Luke Schenn hanging in the wings.
In a game where the Canucks outshot the red wings 41-21……
Let’s go!

The Canucks came out with much more energy compared to their rough start in Philadelphia just one night prior. They were firing shots early and often to begin testing Greiss.
The Wings were bringing a lot of pressure but the Pettersson line was caught out for a long shift after an icing call and the Wings capitalized when Robby Fabbri tipped in a point shot to beat Halak. 1-0 Wings.
It couldn’t have been a better tip. Halak didn’t have much of a chance to make the save.
Possession was definitely in favour of the Canucks in the opening 20 minutes but they seemed to just be out of sync in the offensive zone. They were gaining the zone with ease but couldn’t string together three or four passes to generate consistent scoring chances.
Pettersson drew a holding penalty on Nick Leddy late in the period. The Canucks had 19 seconds to work with on their first power play attempt before the period change.
They had a good scoring chance but Hronek made a great play to clear the puck.

To be honest, not a lot. The Canucks controlled possession and were the better team but the Wings come out of it with a one-goal lead. The excellent deflection from Fabbri was the difference in the period even though the Canucks seemed like they had control of the pace.
It was a bit of a quiet period all in all.

Bo Horvat had a shot from his bumper position that looked it was for sure going to be the equalizer but Greiss made a big left toe save to maintain the Wings’ one-goal lead.
After dominating the shot chart 14-6, the Canucks were finally able to beat Greiss. Horvat made a pass to Conor Garland, who skated around the left side of the net and worked his way into a position to attempt a sharp angle shot.
Garland hit his exact target and beat Greiss over his shoulder to tie the game up. 1-1 after the Garland goal.
Right after the goal, the Wings went to the power play as Jason Dickinson took a penalty. The Wings moved the puck around nicely and Filip Zadina ripped a one-timer from the right aide that burned past Halak. 2-1 Wings.
The game really picked up after the quick pair of goals. There were scoring chances at either end of the ice and a little bit of a brouhaha after Givani Smith challenged Oliver Ekman-Larsson to a fight.
The post-whistle shenanigans resulted in two minutes of four-on-four.
Quinn Hughes was called for a holding penalty with 100 seconds left in the period.
The Canucks were able to kill off the first portion of the penalty and went into the second intermission with a one goal deficit.

It was great to see Garland get a goal and he had a strong period in general. When Smith challenged OEL to a fight, Garland came flying in to back his teammate up. Garland was being extremely aggressive once again and is starting to become an early candidate to be a major fan favourite in Vancouver.
After watching Demko be so sturdy in the crease, Halak is a lot more sketchy. He doesn’t cover as much space as Demko, he doesn’t move like Demko, and he seems to look out of place at times. Halak is a good at tracking the puck but it seems like he was not dialled in for his first game of the season.

Rathbone was upended early and the Canucks were given another power play opportunity with 17:48 remaining in the period.
There was a horrendous offside call that took away a scoring chance for the Canucks as Tanner Pearson came down with Horvat and Garland. Garland tipped the puck past Greiss after the offside was called. That resulted in some extracurricular activities after the whistle once again. The game continued to get more and more emotional. Tyler Bertuzzi and OEL had coincidental minor penalties that resulted in four-on-four action with just over 14 minutes remaining in the period.
The four-on-four featured some excellent back-and-forth action where each team could have scored. Pettersson missed a one-timer with a very open net and Halak was scrambling in his own crease to make a couple of big saves as four-on-four finished up.
There was another scene as Zadina ran into Garland’s back. Zadina was knocked to the ice as he took Garland’s back to the head. There were just over nine minutes remaining in the game and the Canucks were having all the scoring chances in the third period but still trailed by one.
The pressure continued when Rathbone fired a shot on Greiss and the rebound found its way to Justin Dowling. Dowling kicked the puck to his backhand and then rang his backhand shot off the post.
Rathbone drew another penalty for the Canucks as he was hooked by Lucas Raymond in his own zone. This put the Canucks on the power play with 6:02 remaining in the period.
It looked like the hockey gods answered the Canucks’ prayers when Rathbone ripped a slap shot past Greiss that would have tied the game if Höglander hadn’t run into Greiss’ helmet and made contact a split second before. The goal was immediately waved off and the Canucks then had to pull their goalie as they looked to tie the game in the final two minutes.
Sam Gagner, the well-known Canuck killer, fired a shot from his own blue line that found the back of the yawning cage to give the Wings a 3-1 lead.

Bo Horvat was all around the net with the puck and just couldn’t get it past Greiss. It was astonishing that Horvat finished this game without a goal.
Conor Garland got under the skin of almost every player in the Wings’ lineup. He also scored a goal on a beautiful shot into a tiny open area above Greiss’ shoulder.

The Canucks should have won that game by three or four goals. They weren’t able to beat Thomas Greiss who was both excellent and lucky in the game.
When it comes to expected goals, the Canucks had an xGF of 3.71 in this one. They played a great game of hockey but just ran into a good goaltender in game three of their six game road trip.
“When you just have one (goal) on 41 shots, you sure want to get another one there,” said Garland who also spoke about not being a pest in the post game media Zoom.
Garland definitely made his impact felt in this game as he pissed off the entire Wings’ lineup on Saturday night.
Unfortunately, it just wasnt the Canucks’ night on Saturday.
After playing three games in four nights, the Canucks will get Sunday and Monday off before getting back in action on Tuesday against the Sabres.
It’s a 4 pm puck drop on Tuesday.
Uncategorized
Recent articles from Faber