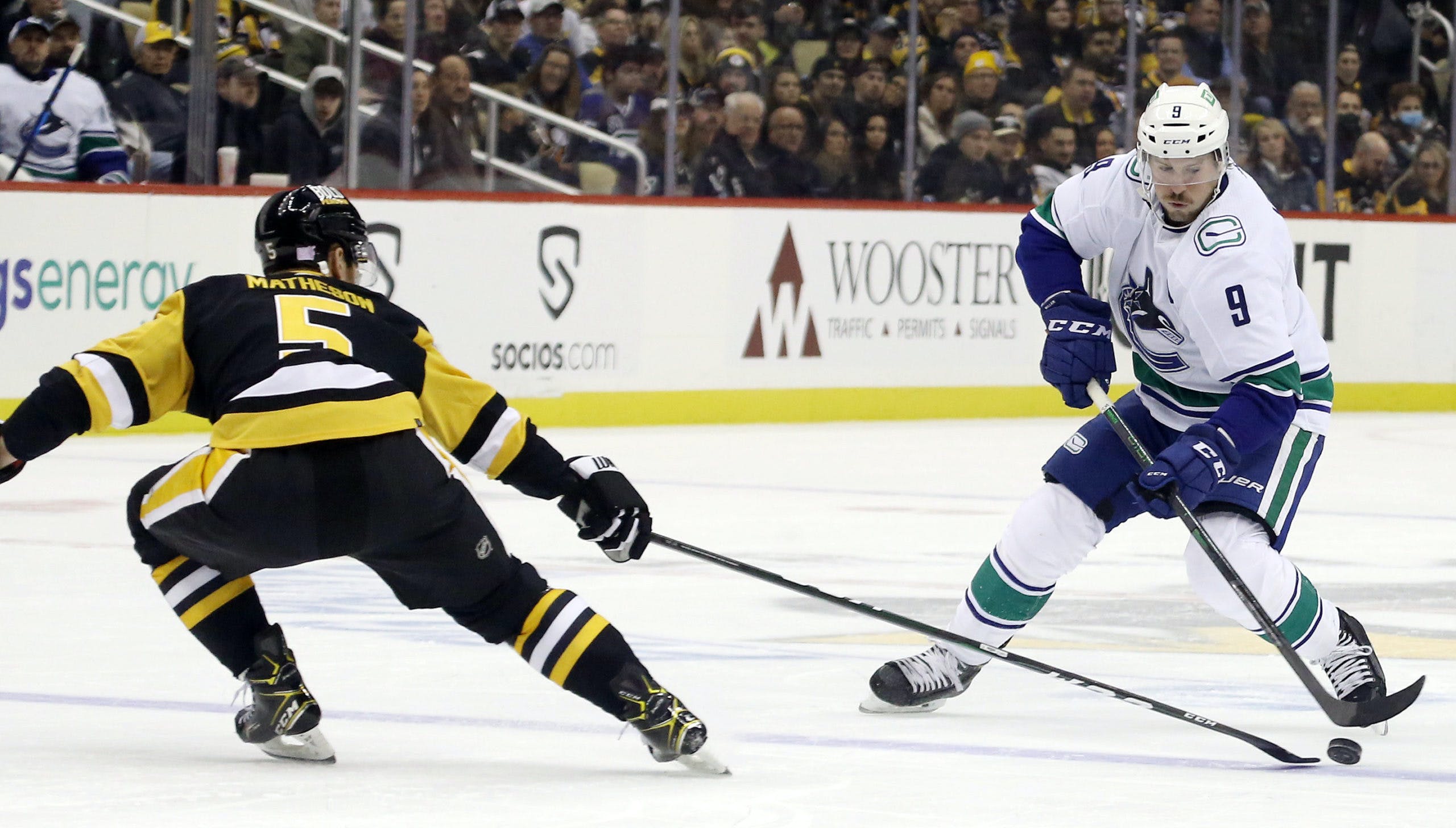 By David Quadrelli
1 year ago
The Vancouver Canucks were back at home after two straight wins against bottom feeder teams concluded their road trip.
With the Penguins having lost their last three games heading into tonight, the Canucks were looking to capitalize and continue to build confidence and momentum.

Here’s how the Canucks lined up against the Penguins:
Let’s do this!

The two sides went back and forth to start the game, but neither team managed to get shots through. The Canucks were credited with the first and only shot of the first five minutes of play when Luke Schenn got a puck through traffic and onto Tristan Jarry.
The Canucks managed to generate some more shots in rapid succession, but it was the Penguins who had the best chances of the period through the first 11 minutes of play.
Sidney Crosby broke in on a 2-on-1 with Jake Guentzel with Tyler Myers serving as the lone Canuck back defending.
Quinn Hughes showed why the pairing with he and Luke Schenn has worked so well when he used his skating ability to cut down the angle on a potential breakaway after the Penguins managed to get past Schenn.
Tucker Poolman had a brutal sequence in which he tried to carry the puck up ice himself, only to get stripped before the red line and give up an odd-man rush the other way. Once back in his own end, Poolman tried a no-look reserve pass to his defence partner that was easily picked off by the opposition.
The Lotto Line was reunited, but on their first shift, the Canucks took a penalty after Brock Boeser slashed Teddy Blueger after the Canucks failed to break out of their own zone.
Kris Letang tripped J.T. Miller on the ensuing power play, and we were treated to some 4-on-4 action for over a minute and a half.
Demko had to be sharp as the Canucks were sloppy in front of him. He was dialled in early in this one.
Trailing in the shot department 13-7, the Canucks escaped the first period unscathed. This one was scoreless heading into the second.

The first two minutes of the second frame were spent almost exclusively in the Canucks’ end, and this eventually cost them.
After Tanner Pearson blocked a slap shot, the rebound went to Jake GUentzel, who fired the puck off of Oliver Ekman-Larsson’s skate and past Thatcher Demko. 1-0 Penguins.
The Podkolzin-Miller-Boeser line had a strong shift in the offensive zone, highlighted by some exceptional board work from Podkolzin behind the Pittsburgh goal. This led to Marcus Pettersson tripping up Miller, and the Canucks’ power play personnel hopped over the boards.
The first unit couldn’t generate much, but the second unit managed to convert after Ekman-Larsson got a shot through that was tipped on goal by Vasily Podkolzin. 1-1.
J.T. Miller took a hooking penalty, and this would serve as a metaphor for what was to come.
The Canucks had a 3-on-2 whilst shorthanded, but after the Penguins thwarted Horvat’s pass attempt, the Penguins were back the other way with numbers.
The Penguins generated plenty of chances with the man advantage, and then almost immediately after going back to even strength, Miller took a tripping penalty to send the Canucks right back on the kill.
This time around, the Canucks’ PKers did a much better job of suppressing chances. The Canucks escaped unscathed once again.
Vasily Podkolzin continued his strong play tonight.
After the Miller penalty expired, Podkolzin showed off exceptional patience and set up Elias Pettersson right in the slot. Unfortunately, the snake-bitten Pettersson wired his wrist shot attempt off the post.
Tyler Myers took a penalty for closing his hand on the puck to send the Penguins right back on the power play. Tyler Motte then took a penalty cross-checking penalty to give the Penguins a 5-on-3 man advantage for a minute and thirty seconds.
Disaster struck after Tucker Poolman backhanded the puck over the glass and was assessed a delay of game penalty.
The Penguins struck immediately after Guentzel absolutely wired a home a one-timer that changed direction after hitting OEL’s stick. 2-1 Penguins.
The Penguins right back to work with another minute and a half of 5-on-3 time left to go.
Guentzel scored again, sniping home the hat trick goal at 18:23. 3-1 Penguins.
Conor Garland was assessed a 10-minute misconduct, and a bad situation got even worse for the Canucks.
The shot total read 12-34 in favour of Pittsburgh with the Penguins up 3-1 heading into the third and final frame.

The third period started with a bang when Bo Horvat broke in on a 2-on-1 and set up Podkolzin for a solid wrist shot was stopped by the glove of Tristan Jarry.
The Canucks followed this up with some sustained offensive zone time, and managed to five shots off over the course of three minutes before the Penguins managed to even get the puck into the Canucks’ end.
The Canucks then took their foot off the gas pedal in the immediate aftermath, and just about every line had a frustrating shift over the next five minutes.
Tucker Poolman had another tough shift that resulted in a Sidney Crosby goal. Demko got a piece of it, but it wasn’t enough to keep the puck from trickling over the goal line. 4-1 Penguins.
The fire Benning chants and the boos grew louder as time dwindled down.
John Marino took an interference penalty on Elias Pettersson with nearly three minutes left to play. The Canucks elected to start the man-advantage with Demko out of the net and were at 6-on-4 as the boos continued to rain down on the ice.
The Fire Benning chants became louder than they’d been at any point as this one came to a close.
The Canucks were booed off home ice and a jersey was even thrown onto the ice. 4-1 final.

Getting booed on home ice is a low point of the season for this hockey club.
“When you lose, it’s hard. I get it,” said head coach Travis Green. “Fans get frustrated. We get frustrated, our players, they’re mad when they lose. Coaches are upset when they lose as well.”
“Yeah, I mean fans want wins and we’re not giving to them,” said captain Bo Horvat.
“The only way to get past this is to get through it,” said Tyler Motte when asked about the boos from fans. “We’ve got to continue to look ourselves in the mirror and find a way to be better because we owe it to more people than just ourselves.”
The Canucks have six games on this homestand. The big story of the game was obviously the chants, boos, and jersey thrown onto the ice, but the other thing to keep an eye on are the empty seats.
For a Saturday night contest with Sidney Crosby in town, Rogers Arena’s stands sure looked emptier than usual.
Fans are demanding change, and are starting not to show up as a result of the organization’s perceived lack of action.
The Canucks take on the LA Kings on Monday night as Alex Edler makes his return to Rogers Arena. Puck drop is at 7 PM.
Uncategorized
Recent articles from David Quadrelli