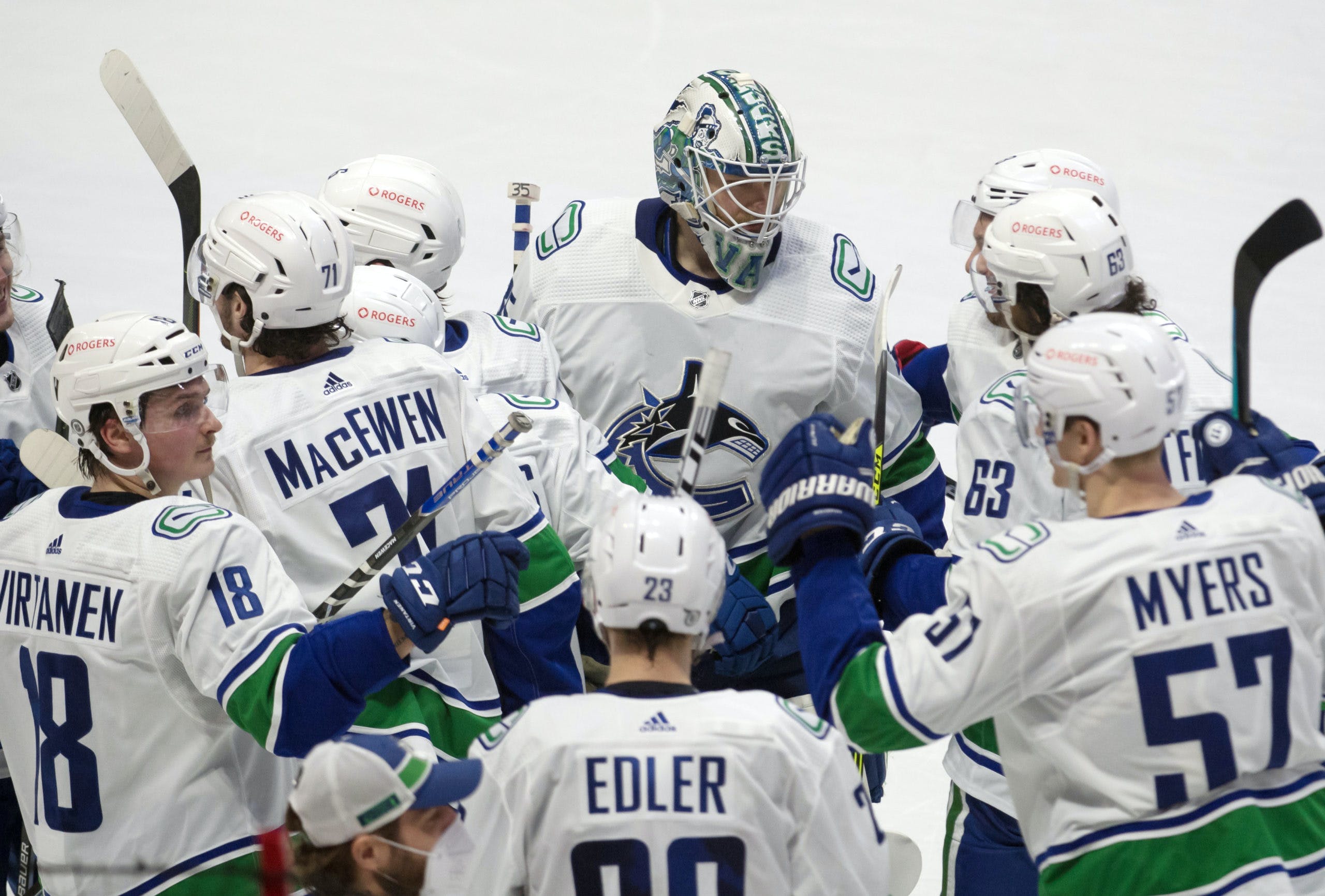 By Faber
1 year ago
The Vancouver Canucks came into Wednesday with the goal of dominating the Ottawa Senators and taking another step towards playoff contention.
They were able to squeak out another two points as they would need extra time to beat the Senators in a shootout.
It looked like newcomer Jimmy Vesey was going to draw into the lineup as he took the pregame skate on the third line.
Vesey was picked up on waivers Wednesday morning and drove from Toronto to Ottawa to participate in Wednesday night’s game.

Vesey didn’t end up making his debut and instead, Jalen Chatfield drew into the lineup as a forward.
Though we had to wait for Vesey’s debut, we didn’t have to wait for goals.
It’s game time, let’s go!

It was a fast and furious start. The Canucks had the first scoring chance when Bo Horvat and Brock Boeser came in for a 2-on-1 and Boeser ripped a wrist shot from the right side through Joey Daccord to score his 15th of the season. 1-0 Canucks.
Shortly after, Nils Höglander picked up the puck and came down the wing before sending the puck over to Horvat who scored his 13th goal of the season when he redirected the pass past Daccord. 2-0 Canucks.
It was the start that Canucks fans love to see. The team was putting a lot of pucks on net and looked like a completely different team than what we saw on Monday night.
Demko was challenged early and was up to the task, as per usual. He faced a Chris Tierney breakaway and shut the door to maintain the two-goal lead.
The Canucks were dominating control of the puck in the period. The Höglander-Horvat-Boeser line was extremely dominant as they controlled the puck in the offensive zone for almost the entirety of their ice time in the first period.
The first power play came when Jordie Benn took a holding penalty with 2:40 remaining in the period.
The Sens outshot the Canucks 9-7 in the first period but the Canucks controlled the pace of play and hoped to continue that pressure in the second period.

The Sens brought an onslaught of pressure to begin the period and it resulted in them getting a goal on the board. Demko gave up a big rebound and it went straight to Ryan Dzingel’s stick. He fired it into the wide-open net to cut the Canucks’ lead down to one. 2-1 Canucks after the Dzingel goal.
The Sens continued to control the pace of play for the period but the Canucks got their chances to change that when Höglander was pulled down by Erik Gudbranson and the Canucks went to their first power play of the game.
The Canucks had some chances with the best one coming off a blast from J.T. Miller that rang off the crossbar. They were unable to score on the power play but did generate a shift in momentum.
The Canucks were getting a lot of shots on Daccord after the power play. Late in the period, the Sens had some offensive zone possession and it resulted in a Quinn Hughes penalty. The Sens went to the power play with 2:04 remaining in the period.
Tyler Motte and Brandon Sutter had a 2-on-1 where Sutter just missed the net on a scoring chance. Motte had been making a big impact in the game in his limited ice time. He had been noticeable on the penalty kill and was doing a great job gaining possession of the puck in the neutral zone throughout the first 40 minutes.
The Sutter scoring chance was the best opportunity of the power play and the Canucks took their 2-1 lead into the third period.
Second-period shots were tied, with each team notching 13 in the middle frame.

Early on, Jake Virtanen drove the net and Daccord’s knee got caught as he was making a move across the crease.
Daccord had to leave the game and that meant that the Sens were forced to throw their AHL goalie Filip Gustavsson into action.
The Canucks don’t fare well against first-time NHL goalies and that immediately showed when Josh Norris came down and ripped a wrist shot past Demko to tie the game up. 2-2 after the Norris goal.
Tanner Pearson rolled his left ankle and was forced to leave the game. He tried to skate through it but ended up heading down to the dressing room at the midway point of the third period.
The Canucks earned another power play opportunity just seconds after Horvat was stopped by Gustavsson on a breakaway.
With Pearson out, the Canucks used Motte on the first unit power play but were unable to create much offence as the game went into the final six minutes deadlocked in a 2-2 tie.
The Sens were all over the Canucks in the late stages of the period. They were forechecking hard and forcing errors from the Canucks’ defencemen. Luckily, the Canucks were able to escape into overtime and try their luck at 3-on-3.

The Sens controlled the puck for the first half of the extra frame and the Canucks controlled it for the second half. Boeser fired a shot off the crossbar and Brady Tkachuk got a partial breakaway but neither team was able to score in the 3-on-3 action.

Demko stopped Tim Stützle.
Gustavsson stopped Boeser.
The goal-scorer Norris was stopped by Demko.
Miller ran out of space and was stopped by Gustavsson.
Drake Batherson was robbed by an amazing right foot save by Demko, although Demko said he didn’t think he got a piece of it:
Captain Horvat lost control of the puck and was unable to win it for the Canucks.
Demko stopped Dzingel.
Gaudette made a move to the forehand and beat Gustavsson through the five-hole to win it for the Canucks.
3-2 Shootout win. 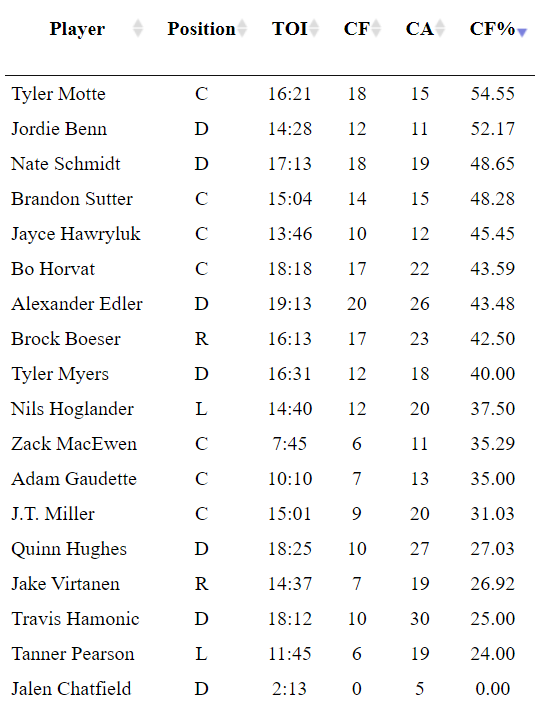 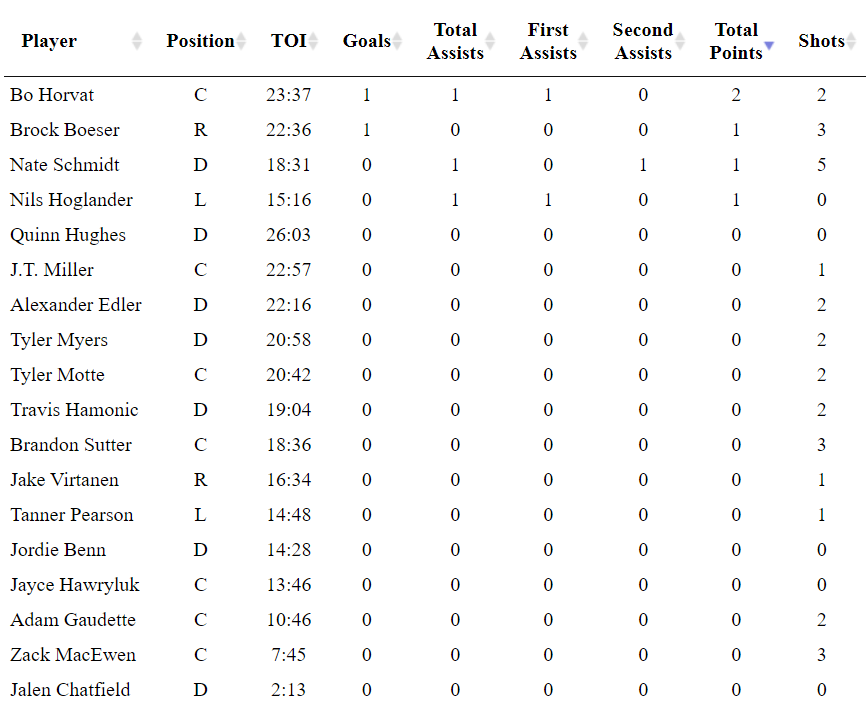 At least Jake Virtanen got some time in overtime.
The trade Pearson situation took a serious kick when he twisted his ankle in the third period.
First-time goalies just love playing the Canucks.
MOVE FEET!! MOVE PUCK!!

Thatcher Demko: He once again gave the Canucks a chance to win in this game and stopped all four of the shots he faced in the shootout.
Tyler Motte: He played over 20 minutes, had four blocked shots and four hits in his return to the lineup.

Early on, it felt like the Canucks were going to be able to run away with this game. The Sens pushed back but Demko was there when the Canucks needed him and they were able to squeak out a win. The team needs to bring their first period effort into the weekend back-to-back series against the Montreal Canadiens to gain some significant ground for a potential playoff push.
The wins are coming and this team must be feeling pretty good about their play without their star centre Elias Pettersson.
Uncategorized
Recent articles from Faber