By David Quadrelli
8 months ago
The Vancouver Canucks were back at home to take on the Blues to close out their season series with St. Louis just 48 hours after losing to them.
These games matter folks!
Here’s how the Canucks lined up in this one.

The Canucks’ lineup remained unchanged from their past few games.
Thatcher Demko started in goal for the Canucks with Ville Husso opposite him.
Let’s go!

Conor Garland, who missed opening the scoring by a matter of inches in the first minute, has been under fire lately. Garland spoke earlier today and said that Bruce Boudreau’s comments post game didn’t bother him, and that he was ready to do whatever he could to help his team win tonight.
Garland’s line with J.T. Miller down the middle and Tanner Pearson on his wing created chances early, and Garland was involved at both ends of the ice.
Will Lockwood hustled for a puck behind the net and attempted a wraparound chance that was held out by Ville Husso. Lockwood has been buzzing and was engaged physically Monday vs. the Blues, but is still looking for the first goal of his NHL career.
Vladimir Tarasenko has nine goals ten assists through his last 15 games against the Canucks, making him a certified Canucks killer. He had a good chance early on and tried to beat Demko five-hole, but as he so often does, the Canucks’ goaltender shut the door.
Shortly after that, Tarasenko found himself with all sorts of time and a wide-open net staring back at him.
Then, in the blink of an eye and a flick of Tarasenko’s wrists, the puck was in Thatcher Demko’s glove.
Honestly, we couldn’t tell you what happened, so we’ll just show you:
By the grace of Thatcher Demko, the Canucks escaped the first period unscathed.

Bo Horvat didn’t come out for the second, and we’re 90% sure that when Alex Chiasson found out about it, he lowered his head and said “I got this.”
He then scored this goal just 30 seconds into the second period to open the scoring in this one and make it 1-0 Canucks.
In the absence of Horvat, Pettersson centred a line with Vasily Podkolzin and Brock Boeser on his wings.
The Blues turned the pressure up big time on the Canucks and tied it up when Nick Leddy let go of a point shot that snuck under Demko’s arm. 1-1.
It took the Blues a while to get their feet under them, but once they did, they were in the driver’s seat and the Canucks quickly needed to regain control of this game.
And who better to do that than Elias Pettersson?
Pettersson read the play perfectly and picked off the Blues’ breakout attempt. Before Husso even realized what was happening, Pettersson had already ripped the puck past him to make it 2-1 Canucks.
Shortly after, the Canucks were granted their first power play opportunity of the game when Mackenzie MacEachern took a tripping penalty.
Unfortunately, a mistake by Pettersson in trying to stickhandle through too many Blues penalty killers led to a breakaway for Robert Thomas the other way, and he made no mistake, beating Demko glove side. 2-2.
“Mistakes like that can’t happen,” said Pettersson post game. “I have to do a better play. I just can’t turn it over.”
“I think he expects a lot from himself,” said head coach Bruce Boudreau. “He made a mistake. We all make mistakes. It’s part of the game. He’d like to have that back. He knows he made a mistake.”
The Blues then got a chance of their own on the power play when Vasily Podkolzin took a holding penalty just as the MacEachern penalty expired.
Brayden Schenn set up Ryan O’Reilly in the bumper spot and he ripped the puck through Demko’s legs to make it 3-2 Blues.
Just like that, the Canucks’ lead was gone.
And just like that, the Canucks found themselves having to play catch up heading into the third.

Ahead of the third period beginning, the Canucks announced that Horvat had left the game with a non-COVID-related illness and would not return for the rest of the night.
The Canucksdidn’t have much fight in the third and were outmatched by the Blues’ high pressure.
Nathan Walker scored to make it 4-2 Blues with just over ten minutes remaining.
Thatcher Demko made a couple more sick saves, and then the Canucks pulled back within one.
But first, check out this save:
Elias Pettersson went to the net front and deflected a Conor Garland shot past Ville Husso to make it 4-3 Blues.
It’s not a goal, but you have to imagine being instrumental in creating that goal feels good for Garland.
The Canucks pushed late in this one, and they pushed hard.
Garland appeared to take a high stick right in front of the referee, but there was no call on the play, much to the chagrin of the Rogers Arena faithful.
With just under two minutes remaining, the Canucks pulled their goaltender to try to tie this one up.
Tanner Pearson was set up for a grade-A opportunity by Pettersson, but Husso flashed the leather.
The Canucks put out their top gunners in an attempt to even the score, but it was all for naught as the Blues kept them at bay.
4-3 final. 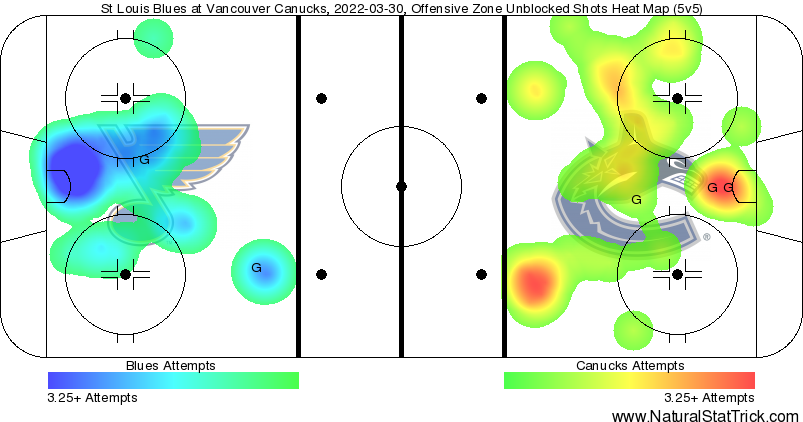 The Blues completed the 3-0 season sweep of the Canucks tonight, and the Canucks’ playoff chances grow slimmer as a result.
Heading into this game, the club had roughly two or three losses to give on the season, and with 13 games remaining, that number has shrunk down to one or two.
That’s not good.
Despite a late push, the Canucks were outmatched by the Blues tonight, and there’s really no other way to put it.
“I didn’t think we had a good 60-minute game,” said Pettersson. “But then again we had the lead, and I tried to make a play and lost the puck, and they scored. It’s small things like that that can turn a game.”
“We’re not a team that typically puts up a lot of offence,” added Luke Schenn. “We need to play the right way and keep goals out of our net. You need full 60-minute efforts this time of year in order to be successful.”
The Canucks will have a few days off before returning to game action on Sunday when they take on the Vegas Golden Knights.
Uncategorized
Recent articles from David Quadrelli