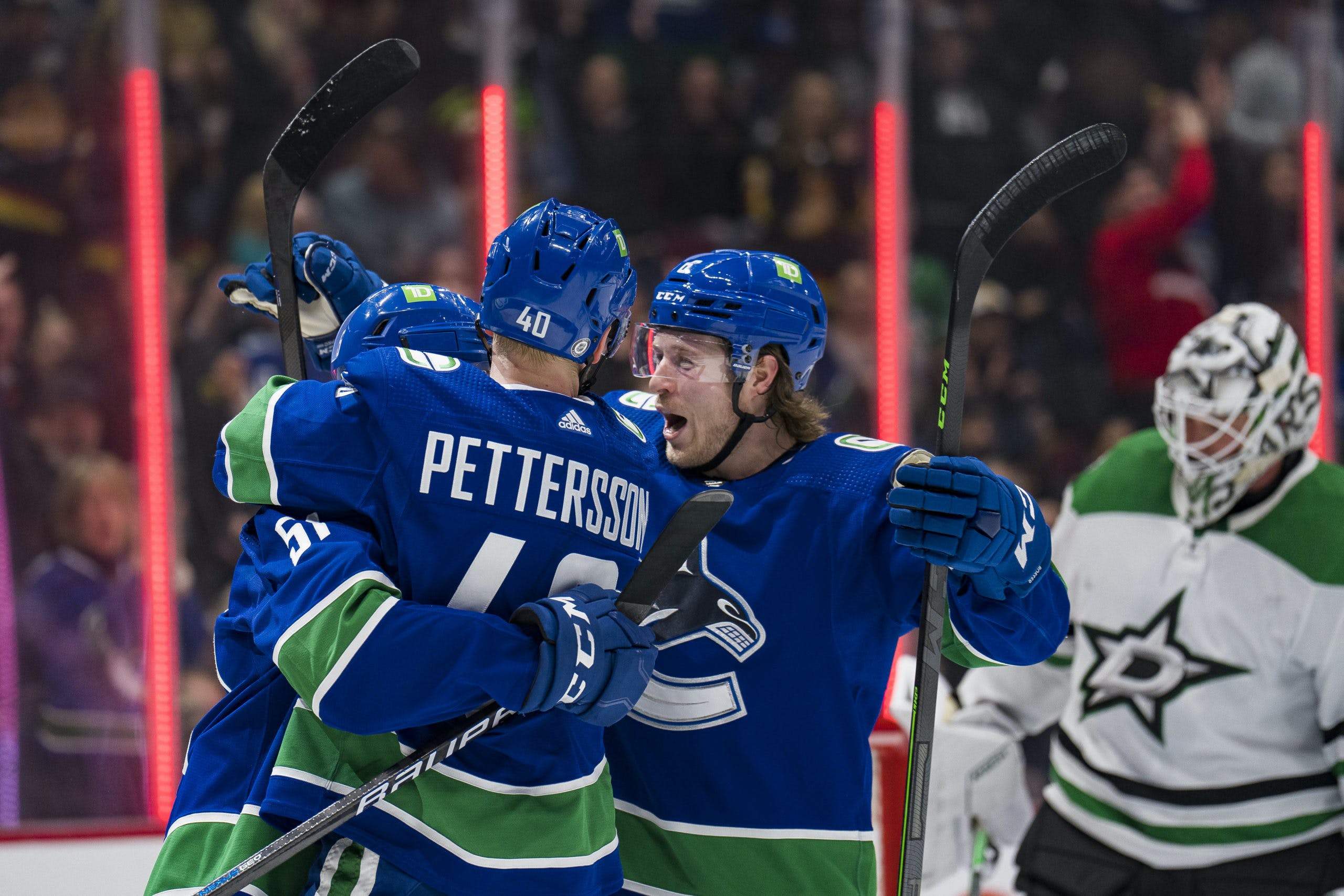 By David Quadrelli
9 months ago
Tonight, the Dallas Stars and Vancouver Canucks faced off in a game that had plenty of playoff implications for both teams, which we broke down in our scenes from morning skate article today.
Just to refresh your memory, the Canucks need every point they can get, and are gunning for a wild card spot or third in the Pacific Division, and the Stars are trying to not have to play the Colorado Avalanche in the first round and also not let a team below them — such as the Canucks — catch up to them.
Here’s how the Canucks lined up tonight.
Small note, Alex Chiasson was taken out of the lineup with a non-COVID-related illness after taking warmups, and Nic Petan subbed in for him.
It’s Jake Oettinger vs. Thatcher Demko on a Monday night and our post game starts NOW!
As always, let’s do this!

The Canucks and Stars went back and forth, and the effects of the Canucks not having a ton of healthy bodies was apparent right away.
After all, they were suddenly without Chiasson, who was expected to play with J.T. Miller
The Canucks struggled mightily to get into the Dallas zone, but eventually, the Canucks’ top players broke through.
After some hard work down low, Vasily Podkolzin played a little catch with Conor Garland, who hammered home a return pass from Podkolzin to open the scoring and make it 1-0 Canucks.
It didn’t take much longer for the Stars to even this one up with a goal of their own, as Roope Hintz made quick work of a power play opportunity after Brock Boeser was called for cross-checking Ryan Suter.
Boeser didn’t appear happy with the call or with Suter, but it didn’t matter.
This game was tied 1-1.
This was quickly shaping up to be a battle of the Canucks’ top two lines vs. everyone.
But then Sheldon Dries did something pretty spectacular.
We’re not even sure if he really meant to do it, but after getting the puck down low behind the Dallas net, Dries pulled off a backhand reverse pass to the side of the net, where Elias Pettersson was waiting.
Pettersson kicked the puck to his stick and buried the puck with ease, cause of course he did.
2-1 Canucks heading into the second.

The Canucks top guys played like their top guys again, and as he so often does, Elias Pettersson was leading the charge.
Pettersson broke in on a 2-on-1 with Brock Boeser, who made no mistake in rifling home a shot after a slick feed from Pettersson.
3-1 Canucks, and Bruce there it is chants for everyone!
Shortly after, Pettersson drew a penalty from Tyler Seguin, which gave the Canucks their first power play of the game and our first look at Vasily Podkolzin in the bumper spot on the first power play unit.
Almost as quick as he was looking like this game’s hero, Pettersson attempted to glove down a Dallas clearing attempt but instead left the puck loose for Roope Hintz, who broke in on a breakaway and made no mistake in beating Demko five hole. 3-2.
The rest of the period was more kind to the Canucks.
After some hard work from Conor Garland in the Dallas end, Brock Boeser hopped over the boards and wristed a hard pass to the stick of Jason Dickinson, who redirected the puck past Oettinger to make it 4-2 Canucks.
Scott Wedgewood came in in relief of Oettinger after this goal, as the 23-year-old netminder allowed four goals on 19 shots.
This game became a lot more physical in the second period, with Tyler Myers leading the charge for the Canucks. He had four hits in the period.
The physicality reached a boiling point when Jamie Benn laid a thunderous hit on Quinn Hughes.
As you may have expected, Luke Schenn made Benn answer for it.
Schenn challenged Benn and the two dropped the gloves in a spirited tilt.
We’re biased, but we’re giving the decision to Schenn on this one.
“That’s a heavyweight tilt right there,” said Jason Dickinson post game. “Jamie tries to spark the team, takes a run at Hughesy there and Schenner is not going to accept that. Love that Schenner is willing to step up and not take his s***, pardon my language — but you can’t let him get away with that because he’s the heartbeat of that team and things like that, if you let that go, it really sparks that team.”

The Canucks had one task: keep the Stars at bay and win this one in regulation.
Vasily Podkolzin got their third period efforts started off the right way when he broke in on the wing and wristed one short side on Wedgewood.
5-2 Canucks after yet another Vasily Podkolzin even-strength goal.
With a three-goal lead, the Canucks just had to keep the Stars at bay for the next 19 minutes, and they would be out of this thing.
With just under five minutes remaining, the Stars pulled their goalie while down by three in a clear attempt to not lose in regulation.
With 3:01 remaining — and only after a couple of misses by Brock Boeser and Jason Dickinson — Elias Pettersson wristed a puck from along the boards at the open cage to make it 6-2 and ultimately put a bow on this one. 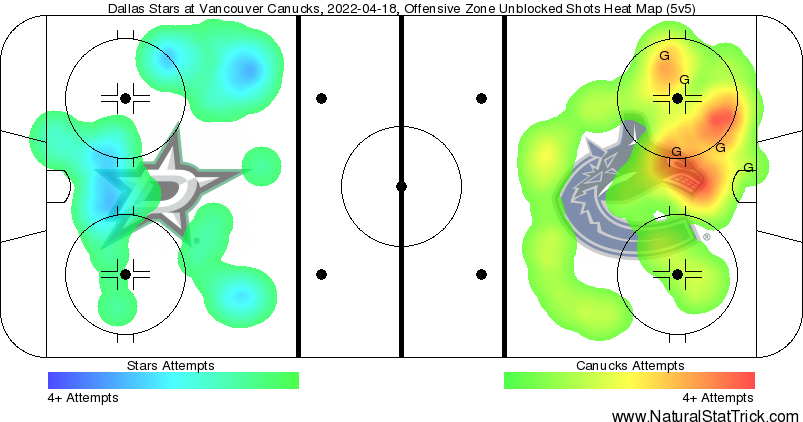 The Canucks needed their top gunners to play like their top gunners, and tonight, Elias Pettersson certainly got the memo, with yet another three points under his belt.
Aside from putting up points, however, Pettersson was involved all over the ice, and was instrumental in helping to shut the Stars down for much of the night.
With his effort tonight, Pettersson is just one goal off of 30, and three points away from his career-high of 66.
We say he does it.

The Canucks got some help tonight on the out-of-town scoreboard, as the Vegas Golden Knights lost in regulation to the New Jersey Devils tonight.
As for the Canucks’ playoff hopes, they’ll simply need to keep winning games, and will have the Ottawa Senators coming into town tomorrow night.
Like the Canucks, tomorrow night’s game will also be the second leg of games on back-to-back nights for the Sens as well.
The question on everyone’s mind now is if Bruce Boudreau will elect to start Thatcher Demko or Jaroslav Halak in goal tomorrow night.
Tune in tomorrow to find out.
Uncategorized
Recent articles from David Quadrelli