CanucksArmy post game: Elias Pettersson says one more time as the Canucks finish their road trip with a pair of wins 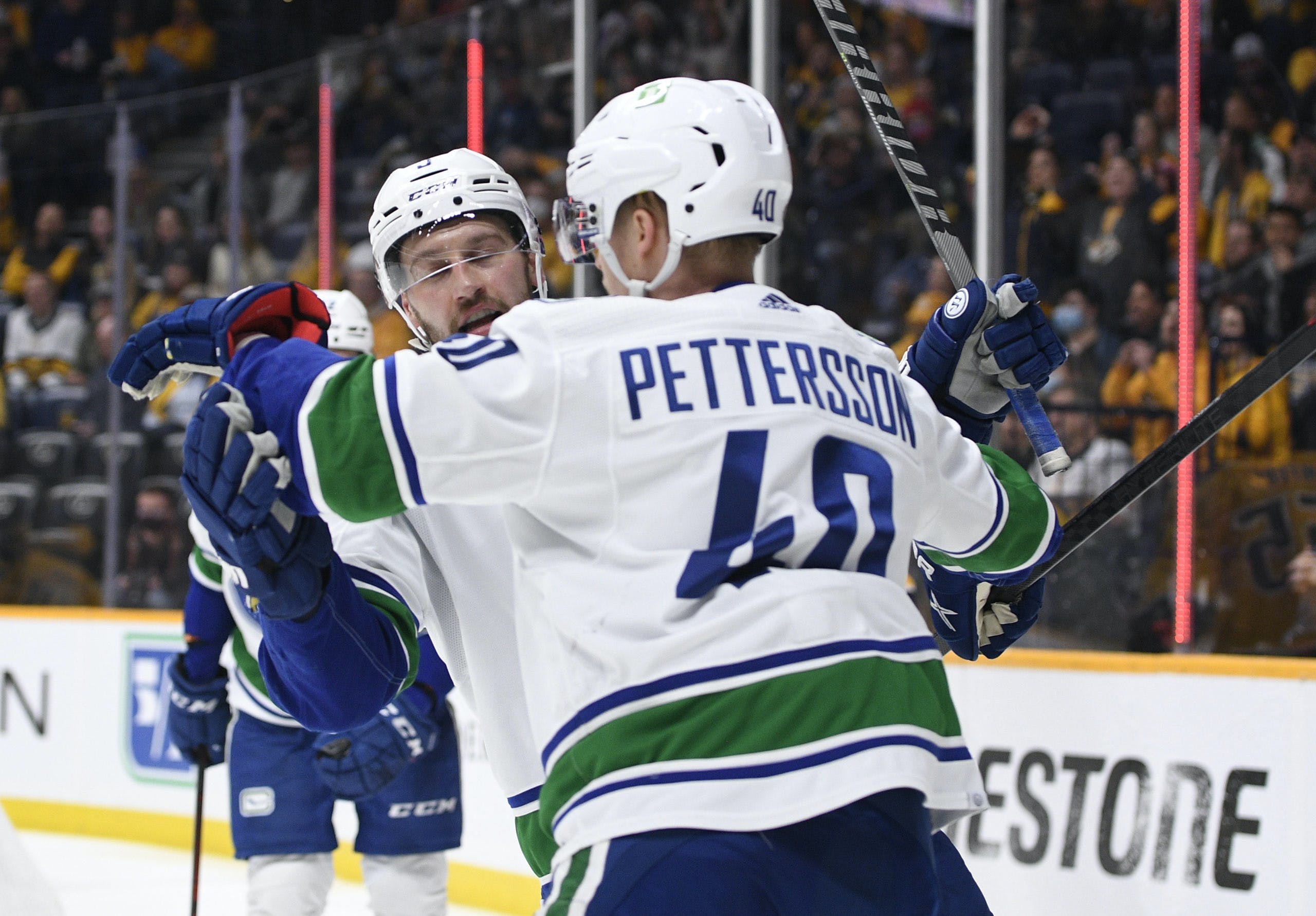 By Faber
1 year ago
On the final day of a treacherous road trip, the Vancouver Canucks rolled into Nashville to take on a Predators team that went 12-1-1 before their current three-game losing streak.
The Preds were on the second of back-to-back games and the Canucks knew that they needed to take advantage of that. When asked if his team needed to have a strong opening 20 minutes in this game J.T. Miller instead said that the first five minutes were going to be crucial.
It was going to be an uphill battle for the Canucks, who saw their captain Bo Horvat go into COVID protocol on Tuesday afternoon.
Horvat joined Conor Garland as the second top-six forward out of the lineup. The team needed to rely on players from lower in the lineup stepping up to get more minutes. Elias Pettersson slid into the middle to play with Vasily Podkolzin and Nils Höglander.
Here’s how the rest of the lineup looked.
Back between the pipes was the Canucks’ all-star, Thatcher Demko, while the Preds threw their backup into the crease with “Big Save” Dave Rittich.
The captainless Canucks had a tough one on their hands but caught the Preds at the right time with hopes of an upset.
It’s time for puck drop in Nashville, you know the drill…
Let’s go!

There wasn’t much to write home about in a whistle-filled first five minutes of play. The first play of note was a fight between Tyler Myers and Michael McCarron. The fight didn’t see many punches land and the big boys went to the box for five minutes each.
The first power play went to the Canucks with 12:52 remaining in the period. The second unit was uhh… interesting. With Tyler Myers I’m the box for fighting, Tucker Poolman saw some time as the point man with Oliver Ekman-Larsson. They were able to get three shots on net but no goal on their first attempt with a man-advantage.
Demko made a couple of nice saves as we went deeper into the period, including a strong right-pad save on former Broadscast guest and Preds leading scorer Roman Josi. The Preds were moving with pace throughout the period and Demko had to be sharp in the opening frame.
Quinn Hughes took a shot to the inside of his right ankle with five minutes remaining and was in pain as he skated directly to the bench. He stayed in the game and didn’t miss a shift.
Pearson was checked in front of the Preds’ net and drew a cross-checking penalty with 1:41 remaining in the period.
J.T. Miller had an open net that he fired the puck over top of when he had a chance from the left side. They carried 19 seconds of the man-advantage into the second period.

On the backs of two power plays, the Canucks controlled most of the offensive zone possession in the first period. There just wasn’t much that happened in the period. The Preds looked like they were skating a bit better than the Canucks and that came as a shock as the Preds were supposed to be the tired team. The goalies were fine but the Canucks needed to test Rittich more in the next period.

The Preds killed off the remaining few seconds of the power play. Tucker Poolman was back out on the ice and he made a poorly-timed pinch that resulted in Brock Boeser having to skate back hard and get his stick in on a streaking Predator. Boeser was called for tripping and the Preds went to work on their first power play of the game.
Matt Duchene had a partial break in tight but Demko stuck with him and made a quality save when Duchene deked to the forehand.
The Preds kept bringing the pressure and it finished with Philip Tomasino firing a shot from the right half-wall into the far side on Demko. 1-0 Preds.
After the goal, the Canucks had some strong bounce-back shifts. The best came when Demko sprung a puck up ice to Höglander who tapped the puck in to send a streaming Podkolzin to the net and as he fired the shot, a rebound came to Pettersson. He fired the puck into the open net for his third goal in two games. 1-1 after the Pettersson goal.
The Podkolzin-Pettersson-Höglander line had another excellent shift that saw Höglander tee-up Pettersson for a shot that he wired off the crossbar. The Canucks pinned the Preds in their own zone for what felt like five but was more like three minutes. The Preds were gassed but forced a turnover and had a three-on-one the other way with Demko making a strong glove save to keep it all tied up.
The Pettersson line had another great shift as their passes were consistently tape to tape with saucer passes mixed in to make the passes look pretty between the young trio. They had multiple scoring chances on a pair of shifts and began building chemistry.
Kyle Burroughs threw a big hit and then dropped the gloves with Tanner Jeannot in a scrap where Burroughs appeared to get the decision. It was a strong effort from the local kid as his dance partner Jeannot ranks second in the NHL for fights.
Pettersson was favouring his left hand after taking a cross-check to the wrist. He seemed to shake it off as time ticked away in the period.

The biggest takeaway from the second period was the dominance of the Podkolzin-Pettersson-Höglander line. They spent a big part of their ice time in the offensive zone as they passed the puck well. Each player on the line showed that they had the stick-handling and skating ability to gain the zone on their own.
The trio was dominating possession and also had an expected control of the goal share at 81.69%.

Early on in the period, Matt Benning took a penalty for interfering with Myers. The Canucks went to work on their third power play of the game with an opportunity to get even in the special teams and break the tie game.
Boeser had a scoring chance at the side of the net but Rittich was able to keep the puck out of the net. Right after the power play expired, Jason Dickinson took a stick to the face and sent the Canucks back to the power play.
It didn’t take long for the Canucks to capitalize as Miller walked in and fired a shot that Boeser tipped in to give the Canucks their first lead of the game. 2-1 Canucks.
Hughes had the second assist on the power play goal.
The Preds brought a ton of pressure at the midway point of the period. There were multiple scoring chances where Demko and the defence were able to keep the puck out of the net even if there was some scrambling around the crease.
The Canucks’ fourth line has been excellent on the forecheck on this road trip and their effort was once again rewarded. Juho Lammikko smacked a loose puck into the back of the net after a forecheck forced a loose puck. 3-1 Canucks.
Demko began to get locked in and made a couple of big saves during some Preds pressure. The pressure resulted in Tyler Motte taking a tripping penalty with 5:25 remaining.
The Canucks just snuck out of the penalty kill as the Preds hit the post but were unable to find the back of the net. Once the penalty expired, Nashville pulled the goalie with over three minutes remaining in the period.
Pettersson was able to clear the puck down the ice to Motte who was slashed to the ice and drew another power play for the Canucks.
That was all she wrote as Demko stopped all but one in a big 3-1 win for the Canucks. 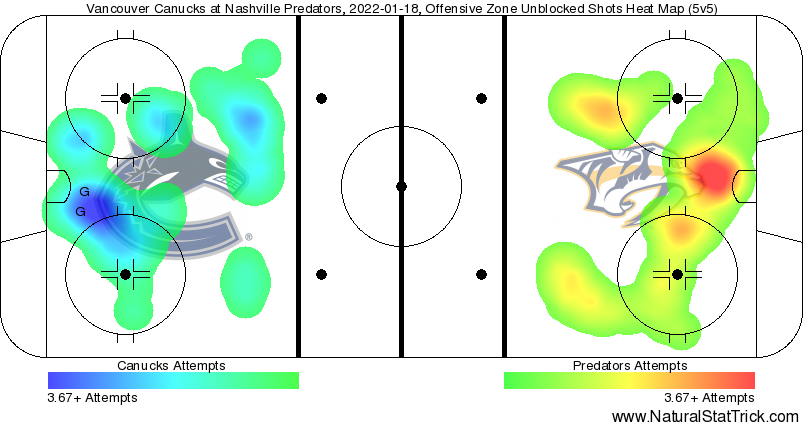 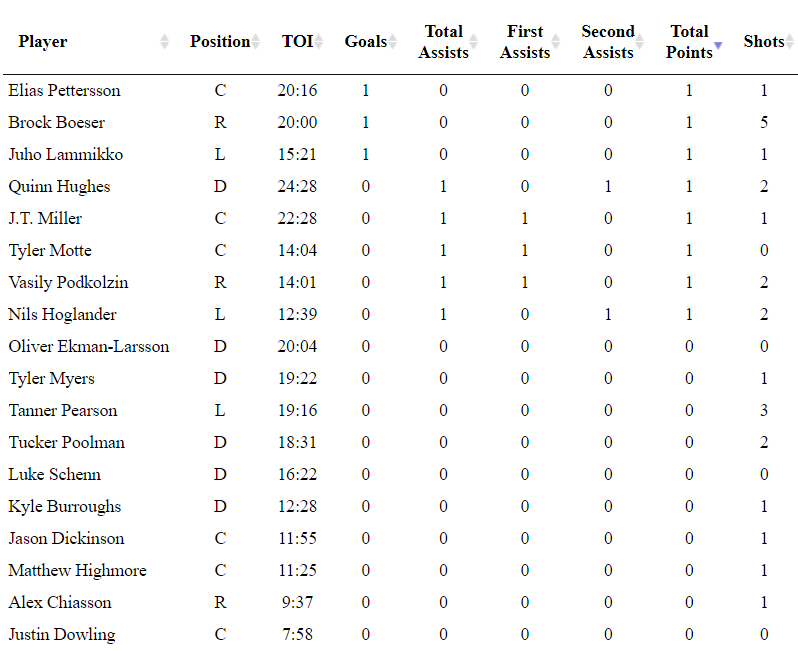 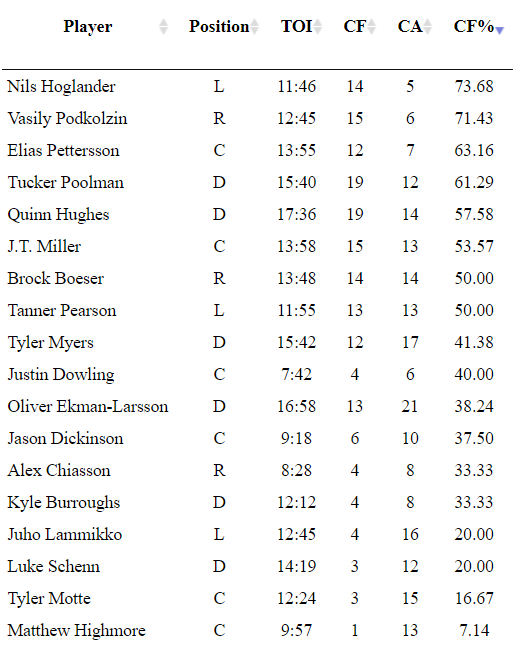 Throw another top performer medal in Thatcher Demko’s trophy case. He faced 32 shots and stopped 31 of them. On top of those 32 shots, Demko saw 25 scoring chances and was excellent. He didn’t make many five-alarm saves but he was just solid all throughout the game. He was rarely out of position and big when the Preds were in tight with chances.

The Canucks closed out their road trip with a pair of wins on a five-game stretch where they went up against some of the best teams in the league. They came out and won this game in the third period. The Preds were running out of gas as they played their sixth period in two days and the Canucks took advantage of that.
It was great to see Pettersson find the back of the net three times in the final two games of the trip and Boeser spoke about what it’s like having Pettersson back to his scoring ways.
“I think everyone can see the confidence that he has with the puck and the plays he’s been making for the past few games,” said Boeser. “That’s the Petey we all know, he could have probably had another two or three [goals] tonight. It’s huge for him and we need him each and every game. Obviously, he’s a big piece of this team.”
The Canucks will now wait and see what the status is of Horvat, Garland, Jaroslav Halak and Travis Hamonic. Head coach Bruce Boudreau was asked about it and he wasn’t sure how to answer with COVID-19 and the borders throwing everything through a loop.
COVID aside, we are unsure what Hamonic’s situation is but could see him return to the lineup soon as the Canucks are set to return to Vancouver and get back into action on Friday as they look for revenge against the Florida Panthers.
It’s going to be nice to have another 7 pm puck drop!
Uncategorized
Recent articles from Faber