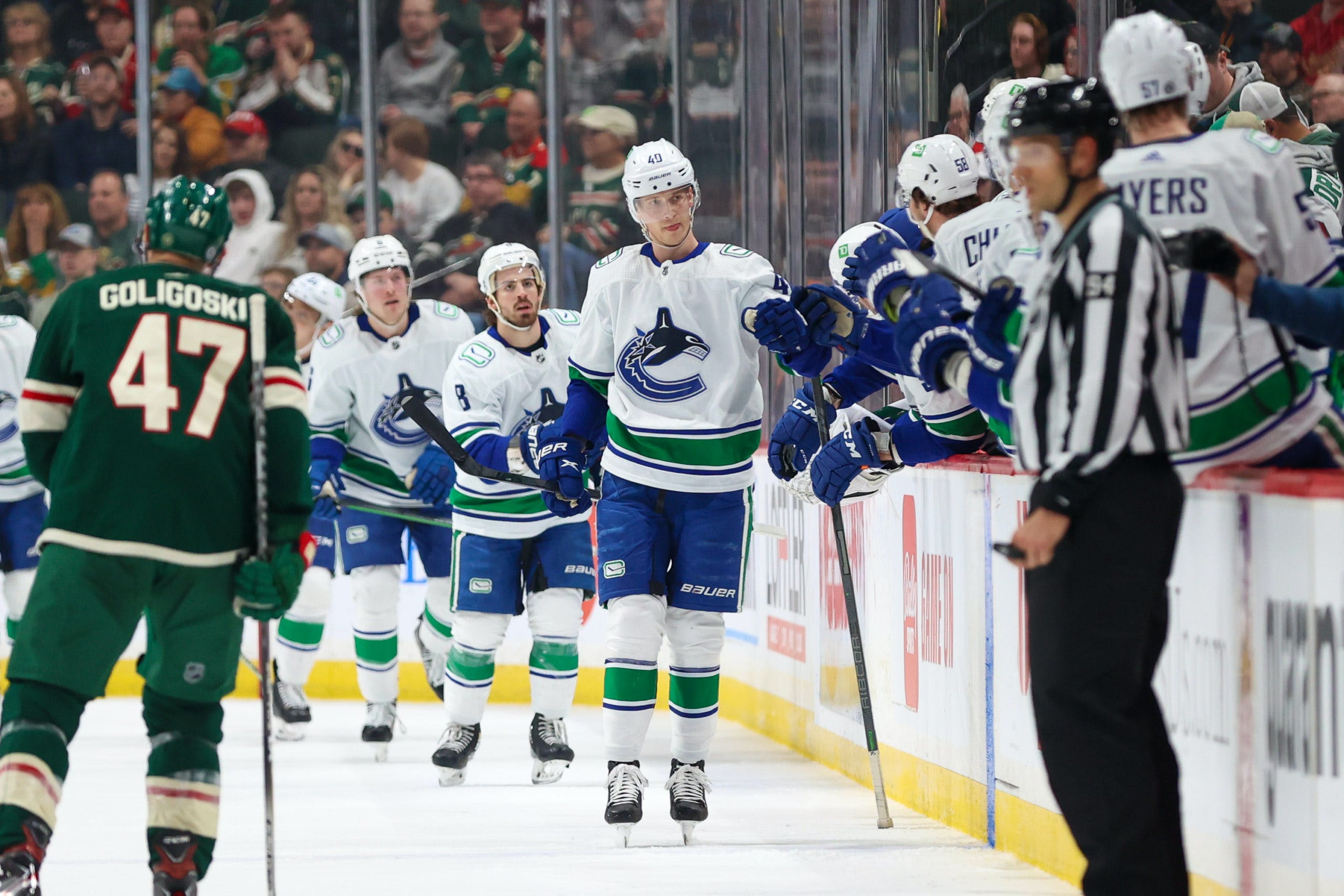 By David Quadrelli
9 months ago
If the mood in the Canucks’ dressing room resembled the one that radiated through the webcam lens on the Canucks’ post game Zoom availability tonight, then it certainly feels like the players are well aware of how crucial this loss was.
The Canucks dropped an extremely important game to the Minnesota Wild, but as you’re about to read, it wasn’t the result of a lack of effort.
Here’s how the Canucks lined up in this one.

Alex Chiasson made his return to the lineup after being out with illness.
Thatcher Demko started in goal for the Canucks while Cam Talbot started for the Wild fresh off of picking up a shutout against the Montreal Canadiens.
Let’s do this!

Territorially and from a shot-producing perspective, this one was all Minnesota early on.
Through the first five minutes of the game, the Wild generated five shots on goal while the Canucks got just one off on Cam Talbot.
It took eight minutes for the Canucks just to get any sort of zone time, and it came thanks to J.T. Miller working alongside Alex Chiasson and Vasily Podkolzin down low.
Kevin Fiala accidentally on purpose slew-footed Thatcher Demko, and there was no call on the play.
You be the judge.
Is this goalie interference?
The first penalty of the game was assigned to the Canucks after Matthew Highmore interfered with Kirill Kaprizov.
It didn’t matter much though, as Kaprizov accidentally slashed Brad Richardson’s with the heel of his stick to negate the power play almost instantly.
Hunched over and with a hand to his face, Richardson was bleeding profusely as he rushed to the Canucks’ bench.
It was a scary-looking play, but Richardson would return for the second period.
At 4-on-4, Quinn Hughes nearly opened the scoring with just seconds remaining in the period after he threw a shot on goal that took a bounce which caught Talbot off guard.
This one remained scoreless after 20.

The Wild killed off the penalty after a solid pad save from Cam Talbot off of Elias Pettersson and some tidy penalty killing in front of their goaltender.
Kevin Fiala opened the scoring shortly thereafter when Tyler Myers and Oliver Ekman-Larsson got their signals crossed. 1-0 Wild.
Elias Pettersson didn’t like that, though.
Pettersson floated his way into the slot and found some open ice while Conor Garland scanned the ice from behind the Minnesota goal.
Garland snapped a superb pass to Pettersson, which he made no mistake in burying to make it 1-1.
That goal marked Pettersson’s 30th of the year, for those keeping score at home.
Things happened FAST in this period, as less than two minutes later, Jared Spurgeon scored to make it 2-1 Wild.
But then *checks notes* Matthew Highmore didn’t like that, and just a hair over two minutes after the Spurgeon goal, Highmore potted his fifth of the season to make it 2-2.
The Garland-Pettersson-Boeser line did more good work in the period at 5-on-5, as Conor Garland once again picked up another primary assist after shooting the puck low, which created a rebound for Elias Pettersson to clean up without much issue.
3-2 Canucks on Pettersson’s 31st of the season.
Pettersson has been producing at a torrid pace since GM Patrik Allvin said the Canucks didn’t have a superstar, and this is quite possible the best hockey we’ve seen from Pettersson in his career.
Mats Zuccarello scored with a minute and a half remaining in the second to make this game even more interesting, and tied at 3-3 heading into the third.

This was certain to be the biggest and most crucial third period that the Canucks have played this season, and it opened with a too many men penalty going against them.
That was the bad news.
The good news was that the Canucks had Thatcher Demko in net, and he was as sharp as ever during the Minnesota power play. He made two huge saves off grade-A chances to keep this game tied for his team.
The two teams played very conservative hockey in the minutes that followed, but the Wild were given another great opportunity when Tyler Myers was called for high-sticking Kevin Fiala.
The Canucks managed to kill off the penalty and keep this game tied as the final ten minutes approached.
Kevin Fiala, who’s been on an absolute burner lately, did a couple of laps with Brad Hunt chasing him, and scored his second of the game to make it 4-3 Wild.
The Canucks put a ton of pressure on the Wild after the goal, with Elias Pettersson’s line continuing to have extended pressure in the Minnesota end.
It was all for naught, however, as once the Wild got it out of their end, Kaprisov beat Demko five-hole to make it 5-3 with just under two minutes to go.
That would be all she wrote on the game, and most likely, on the Canucks and their playoff hopes, too.
5-3 Minnesota final. 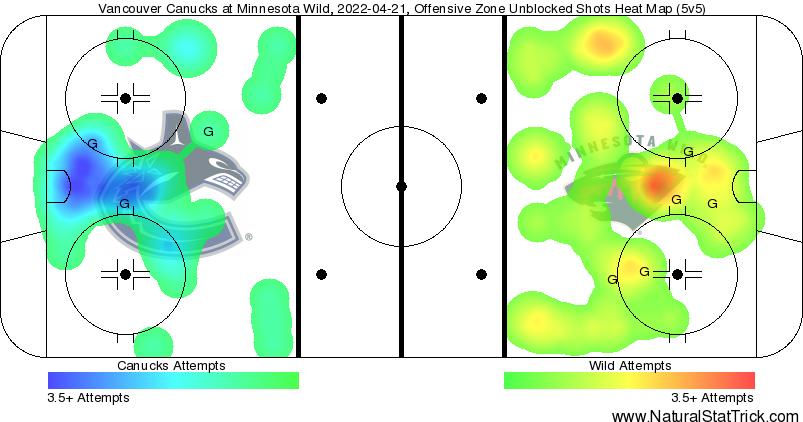 If there’s anything to take away from this game — and really, every game since the Canucks began their triumphant return back into the playoff conversation — it’s that Elias Pettersson is looking dominant once again.
As mentioned, this is almost certainly the most effective Pettersson has been since arriving in the NHL.
Check back tomorrow morning when our expert wordsmith Stephan Roget gives you all the Elias Pettersson hype you need to make the sad thoughts go away.

Well, it’s getting very close to “play the kids” time, only the Canucks don’t have many kids to play.
Spencer Martin could certainly use a look, and once the Canucks are officially eliminated from playoff contention, he almost certainly will.
In case you’re wondering, the Canucks’ playoff hopes now hang on by a thread, and it would take an almost miracle for them to make it now.
The Canucks will be back in action on Saturday when they take on the Calgary Flames.
Uncategorized
Recent articles from David Quadrelli