By Faber
9 months ago
After an all-star break in which the team’s most important puck-mover entered COVID protocol, the Vancouver Canucks were back in action on Tuesday night as they battled with the Arizona Coyotes.
If you haven’t heard by now, don’t worry about it, everyone’s been on break! Here’s the news, Quinn Hughes is in COVID protocol and will miss at least three games before he returns to the Canucks. With Hughes out of the lineup, much more pressure was put on the rest of their defence core. Most specifically, Tyler Myers and Oliver Ekman-Larsson.
The OEL-Myers pairing has done a good job this season. The duo has been in the shadow of Hughes and doing a great job at playing good hockey while at five-on-five. On Tuesday, they were going to be asked to do a lot more as the rest of their top-four consisted of Luke Schenn and Kyle Burroughs on his off-side.
As the team looked for some patchwork on defence, they looked to their all-star to help along the way as Thatcher Demko was between the pipes for the Canucks. The Coyotes counter-punched with Karel Vejmelka.

The lines were swapped around a bit as we saw Jason Dickinson stay in the top-six, Tanner Pearson line up with J.T. Miller and Brock Boeser, and the young guns come together on the third line.
Many Canucks fans were excited to see the lines from morning skate as Vasily Podkolzin and Nils Höglander flanked Elias Pettersson’s wings on an all-European youngsters line. The trio had impressed earlier this year in their 15+ minutes of play as a line. There are a lot of exciting possibilities from this trip and perhaps playing together would help them find success.
It was the return of Loui Eriksson and Antoine Roussel while Jay Beagle watched from the gondola as he was sidelined with an injury. It’s the return of three much-discussed players in the comments section here at CanucksArmy.
Here’s to the big money trio, pour one out.
Alright, that’s enough lollygagging, it’s game time.
Let’s go!

The teams traded shots in the opening five minutes of play. Each team had some danger with the Coyotes spending a long shift in the Canucks’ zone against their fourth line and bottom-pair. Conor Garland looked dangerous in the early parts of play as he dipped and doodled through defencemen with his spins and shifts.
The first power play of the game went to the Coyotes when Juho Lammikko took a holding penalty with 10:27 remaining in the period. This penalty set up the battle of the league’s worst power play matching up against the league’s worst penalty kill.
The Canucks were able to kill off the penalty and it ended with Pettersson and Miller streaking down the ice to flip the momentum after the penalty kill.
Roussel and Eriksson received their welcome back shoutout from Al Murdoch over the PA and Roussel received some decent cheers while Eriksson’s cheer was much louder but also filled with booing that was loud enough to hear on the broadcast.
Dickinson was next to take a skate to the penalty box. He took a hooking call with 49 seconds remaining in the period. It was somewhat of a good penalty as the Coyotes player would have had a clear scoring chance. The Canucks were able to kill off the first 49 seconds of the power play and the Coyotes’ man-advantage passed over to the second period.

It was a slow return to hockey for the Canucks. It was a low-even period for the home team as the Coyotes landed 15 shots on target and had control of the pace in the period. The Canucks didn’t do a great job of attacking the net in the first period as their shot attempts primarily came from the wings. Maybe it was just a warm-up period in the return from the all-star break but no matter the case, the Canucks had to be better to pull out a win.

The seconds ticked away and the Canucks killed off the Dickinson penalty and were back to even-strength for the second period.
It may have taken 24 minutes but the Canucks finally had extended time in the offensive zone. After a couple of shots on net, Noah Juulsen pinched in deep to chase a puck in the corner and he made a perfect pass onto Garland’s stick and he ripped the shot into the back of the net from the slot. 1-0 Canucks.
The Canucks went to their first power play just after Phil Kessel took a slashing penalty with just under 16 minutes remaining. It was a quick run for the Canucks as OEL fired a shot from the point that bounced off Bo Horvat’s knee and into the back of the net. 2-0 Canucks.
The floodgates were busting open as Podkolzin chased down a puck and made a perfect one-touch pass to Pettersson, who walked in and ripped a wrist shot into the top corner. 3-0 Canucks.
After a slow start, the Canucks’ offence was doing exactly what it was hoping it could do. They began running away with the game after three quick ones.
There was a mad scramble in the Canucks’ crease that saw Demko rolling around like a BPL midfielder after getting breathed on. The Coyotes weren’t able to get a strong secondary shot on Demko during the scramble and he was perfect through the 17 shots that he faced through 30 minutes.
That perfection didn’t last much longer as Lawson Crouse pounced on a loose puck and found a tight angle to slide the puck past Demko to cut the lead. 3-1 Canucks after Crouse’s goal.
Höglander landed a high-stick on a Coyotes’ defenceman at the offensive end of the rink and sent the Coyotes back to the power play with a chance to get within a goal. The Coyotes had a couple of decent chances including a Kessel shot from the left half-wall that didn’t result in more than a shot attempt and we were back to five-on-five hockey with a few minutes to go in the period.
It was a strong second period for the Canucks and they skated into the intermission with a two-goal lead.

Even though the Coyotes carried a strong control of the shot share and Corsi, the Canucks were capitalizing on their scoring chances while Demko was stuffing the Coyotes’ chances. Demko faced 25 shots on net and was up to the test on all but one through 40 minutes of play.
The power play clicked quickly for the Canucks and they received some scoring from their star players to give them a lead through two periods of play.

We saw some line juggling as Höglander slid to the fourth line and Tyler Motte moved up to play with Horvat and Garland. That resulted in Dickinson coming down to play with Podkolzin and Pettersson.
Jakob Chychrun and Podkolzin got into some rough stuff after a whistle and they both received roughing minors that sent the game into four-on-four action with 15:45 remaining in the third period.
Miller noticed that both teams were changing and he picked up momentum while skating from coast-to-coast and scoring another beautiful goal of the year quality goal. 4-1 Canucks.
OEL recorded an assist on the goal, giving him his third point of the outing in his role as the Canucks’ top pairing left-shot defenceman.
Motte took a high-sticking penalty after a Coyotes player slashed his stick out of his hands and into another Coyote player’s face. It was a brutal call and the 50% capacity crowd was loud and clear with if they thought the refs sucks or not.
The game was moving quickly in the final frame and the Canucks earned another power play when Miller took a slash with 8:35 remaining.
It was becoming a special teams night for the Canucks as they scored their second power play goal in as many attempts. Pettersson made a great pass onto Brock Boeser’s backhand and he ripped in the fifth goal of the game. 5-1 Canucks.
As the Canucks continued to build on their goal count, Demko kept the Coyotes at bay as the shot count against the Canucks’ goaltender moved into the high 30s while he continued to stand tall.
There was a late call on the Coyotes when Höglander was cross-checked into the boards with under two minutes remaining.
There was no real action on the power play and that was all she wrote. A big 5-1 win for the Canucks. 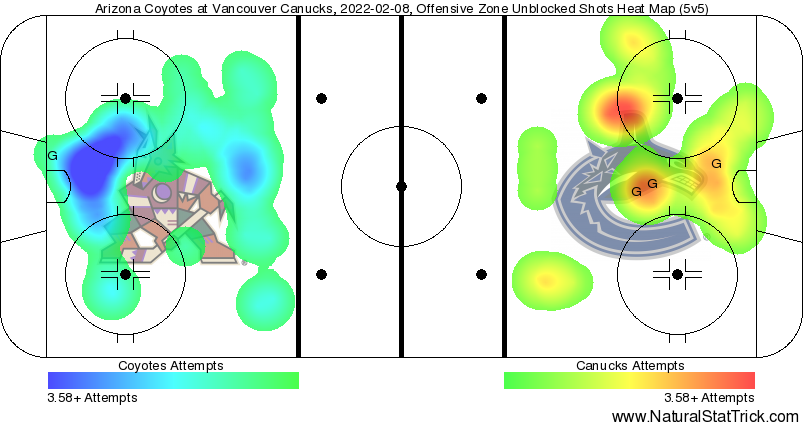 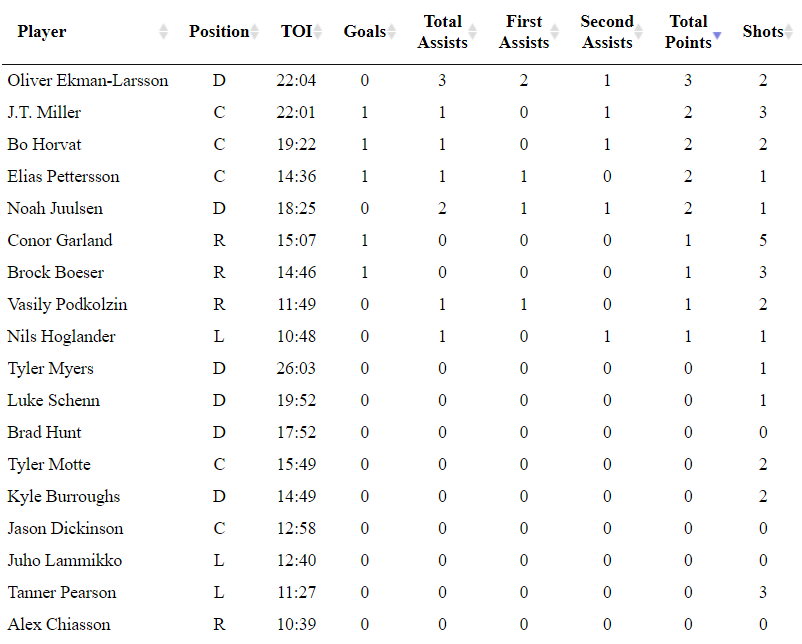 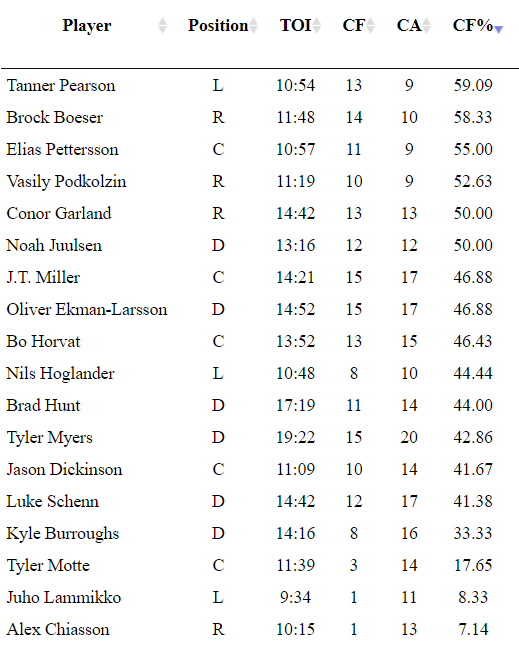 Even during a five-goal outburst, the top performer of tonight’s game goes to Thatcher Demko in an effort where he made 35 saves on 36 shots and was huge for the team when they needed him. He saw 12 high danger shots against and saved 11 of them while having a goals saved above average of 1.72 on the night. Demko was big tonight and though there were some other names that could have been tossed in the mix, we went with the goalie.

One of the candidates for the top performer was J.T. Miller and he gave high praise to his goaltender in the post-game media availability.
“I feel like I say the same thing about Demmer all the time,” said Miller. “He’s just so good. He gives us a chance to win every game and when we don’t have our best, he always keeps us right in the game. He buys us another period to get our crap together or he makes a timely save, he just he’s always there for us. We feel so comfortable and have so much confidence when he’s back there and he’s just doing his thing. I feel like it’s just becoming so regularly and he’s proving to be one of the best in the league.”
There is no rest as the Canucks are right back in the fight against the New York Islanders with the second of back-to-backs. The team will continue to be without Quinn Hughes and is expected to start Jaroslav Halak. That will be another tough task on the defence of the team and they will need to get a good effort out of Halak to lock down another victory.
The game time for Wednesday is set for 7:30 pm.
Uncategorized
Recent articles from Faber