CanucksArmy post game: Demko shines, Boeser shoots and the Canucks skate off with a 2-1 win over the Bruins 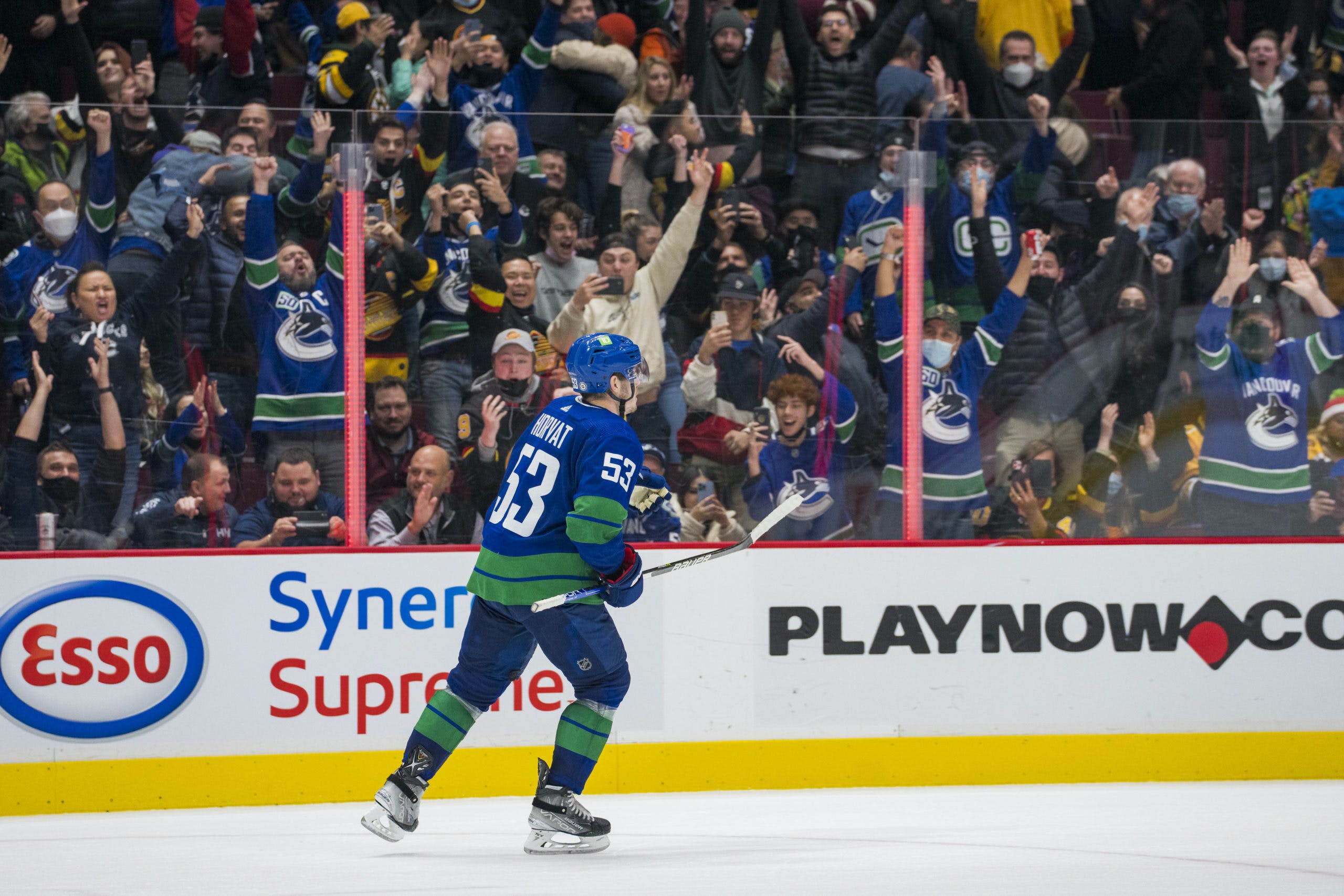 By Faber
1 year ago
Game two of the Bruce Boudreau era was upon us as the Boston Bruins came into Vancouver to face the Canucks.
The Canucks were looking to build off of their big 4-0 victory over the Los Angeles Kings on Monday.
We heard that Boudreau wanted to have more skilled forwards killing penalties as he looked to implement up to eight forwards doing quick and aggressive 30-second kills.
The Bruins were coming off of three days without games and were well-rested for the Canucks.

Thatcher Demko was back in the crease for the Canucks on his birthday and the Bruins went with Jeremy Swayman between the pipes.
Oliver Ekman-Larsson was absent from the lineup and that meant that Kyle Burroughs drew into the lineup to replace him.
The Boudreau effect is real as we saw Bo Horvat and Tanner Pearson split up for the first time this season.
Brad Marchand was coming off of a three-game suspension for the slew foot on OEL.
It’s time for puck drop so why don’t we go there.
Let’s go!

Demko backhanded a puck into the corner to a Bruins player but was able to get back into position to make a nice glove save on a quick pass to the front of the net.
The Bruins followed that pressure up with an odd-man rush that saw them ring the puck off the crossbar over a down and out Demko. The Bruins had the early control of possession and were getting quality scoring chances from the control of the puck.
Jason Dickinson drew a holding penalty that sent the Canucks to their first power play of the game with 7:30 remaining in the period.
The Canucks spent a good amount of time in the offensive zone but the Bruins were all over every shot attempt that the Canucks went for. There wasn’t a ton of movement on the power play and the two minutes expired without a goal.
Scoring chances cranked up for both teams near the end of the period as each group was sending lots of traffic in front of each goaltender.
Conor Garland pissed off Nick Foligno and got him to take an unsportsmanlike conduct penalty with 2.2 seconds left. The faceoffs didn’t result in anything and we went to the intermission in a scoreless draw.

The Bruins killed off the 1:58 of remaining power play time. The Canucks struggled to gain the offensive zone on the power play. The Bruins hit another crossbar just after the penalty expired.
It was taking quite a while for the Canucks to get a shot on net. With the Bruins pressure came an interference penalty to Tyler Myers with 11:46 remaining in the period.
Tyler Motte and J.T. Miller had a two-on-one to begin the penalty kill and Motte had a scoring chance as he drove the net but put the puck wide. Travis Hamonic had a good shift as he blocked a shot and set up a clear as well. Both Pettersson and Quinn Hughes killed some time while shorthanded and Motte had a wide-open path to the net on a break where he fired over the net and broke his stick in disgust after the attempted shot.
The madness continued with back and forth action and it resulted in Erik Haula getting a breakaway where he went to the backhand and beat Demko. The Canucks made a coach’s challenge and the goal was reversed.
We’re back to a scoreless game after a couple of minutes where both teams were frantically getting scoring chances.
The Canucks began to battle back after their strong penalty kill and the disallowed goal. They had a couple of good shifts including one from the Podkolzin-Pettersson-Garland line that had a couple of scoring chances.
Hamonic took an illegal hit from Marchand and limped off the ice then down the tunnel. The Canucks drew a power play on the sequence and went to work with the man advantage with 5:33 remaining in the period.
It didn’t take the Canucks long to get to work on the power play. They set up in the offensive zone and Miller fired a hard pass on the ice to Boeser’s stick and he ripped it into the top corner over Swayman. 1-0 Canucks.
There was a mad scramble in front of Demko where he made two saves in tight on a loose puck that was bouncing around his crease with just under two minutes remaining in the period.

It was a much better period for the Canucks as they controlled the majority of scoring chances in the period and skated off with a one-goal lead. They really took control of the game thanks to an excellent effort on the penalty kill and a power play of their own late in the period.

You’d have to believe that Bruce Boudreau is quickly falling in love with Thatcher Demko, who has not allowed a goal in the five periods in which Boudreau has had him in the net. Demko saw 15 shots and 14 scoring chances against in the first 40 minutes of play.
Another interesting stat was that Boeser had six shot attempts through 40 minutes. This is a great sign and it seems like Boudreau’s talk with Boeser to shoot more has worked as Boeser has two goals in the two games under Boudreau’s coaching.

It was not the start that the Canucks wanted when Juho Lammikko took a slashing penalty just 3:26 into the period. This gave the Bruins their second power play opportunity of the game.
Luke Schenn saved a goal as a puck trickled its way through the crease and near the goal line.
Just after the Schenn play, Miller swung by the crease and tripped up the goaltender. This sent the Bruins to a five-on-three for 43 seconds.
They scored just seconds into the two-man advantage when Patrice Bergeron tipped a puck past Demko. 1-1 after the Bruins goal.
The goal was scored so quickly that the Bruins had another 1:51 of power play time left over. The Canucks were able to kill off the penalty but Pearson took a delay of game penalty right after and gave the Bruins another big opportunity.
Just 14 seconds into the power play, the Bruins took a tripping penalty on Dickinson and we were set for some four-on-four action with 12:24 remaining in the period.
Brock Boeser continued to shoot the puck and had a couple of good bounces that almost resulted in a goal. It’s such a simple thing to shoot the puck more but you could just feel the confidence of Boeser emanating from the ice.
Both teams had chances late but the goalies held tight and we were off to overtime.
With Hamonic leaving the game in the second period, Myers’ minutes went through the roof as he played over 10 minutes of ice time in the third period.

The Canucks iced the puck with 3:26 left after some quick drives for both teams that resulted in no scoring chances.
Hughes had a quality scoring chance on the right side with a one-timer that ripped into the glove of Swayman.
Nobody was able to get the game-winning goal and we were off to a shootout.

Pettersson lost the handle on his deke to the backhand.
David Pastrnak missed the net on a glove-side shot.
Miller came in slowly on the left and deked back to his forehand to beat Swayman. CANUCKS GOAL.
Charlie Coyle was robbed on a big blocker save from Demko.
Horvat came in with a chance to win it and roofed a shot over Swayman to win the game! CANUCKS GOAL. 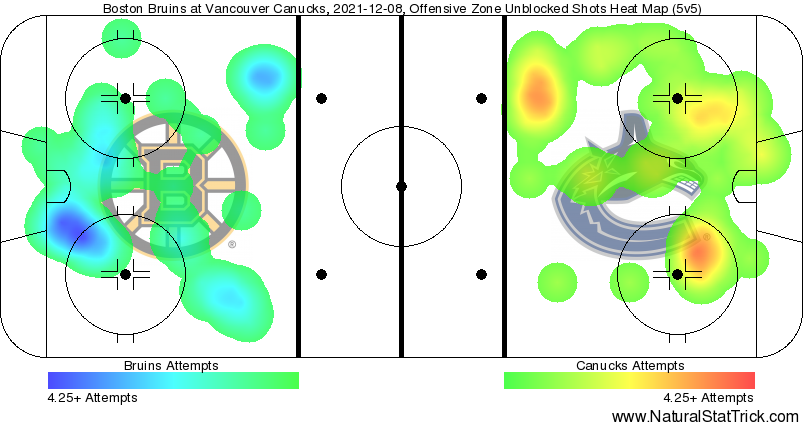 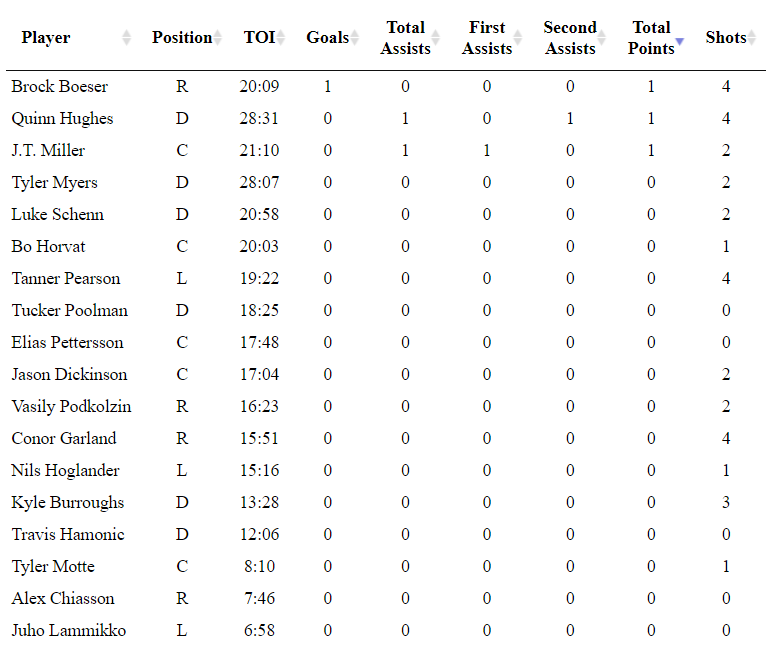 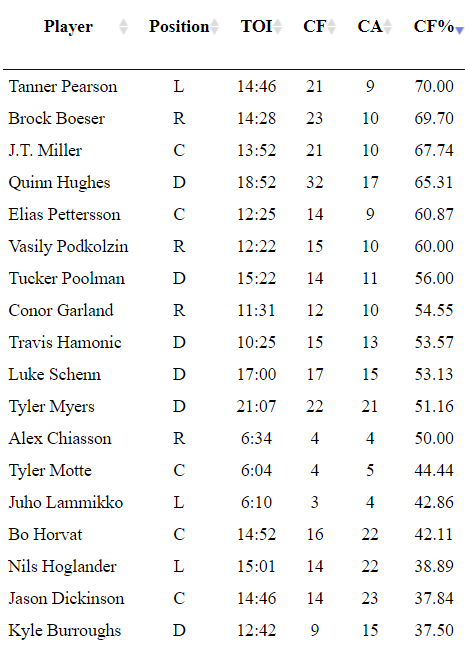 Thatcher Demko was excellent on his birthday as he allowed just one goal on 36 shots and was perfect in the shootout, stopping the two shots that he faced.
Brock Boeser and Quinn Hughes combined for 20 shot attempts. It’s clear that Bruce Boudreau wants the team to shoot the puck more and we are seeing that from two of the Canucks’ best players.

It was another big win for the Canucks under the guidance of Bruce Boudreau. Thatcher Demko was excellent once again as he made 35 saves on 36 shots. The Canucks seemed to just want to clear the puck out of their own zone as quickly as possible and that led to some good transition attacks where the Canucks were able to spend a lot of time in the Bruins’ zone.
The team came through in the shootout on the backs of two of their leaders in the room. Miller and Horvat scored big shootout goals to win it for the second game in a row.
The Bruce Boudreau era is making Canucks’ hockey fun again and we are all loving the ride so far.
Confidence is being shown by the Canucks and it’s coming from the coach instilling it in them. “For Bruce to put me on the PK, it means a lot,” said Hughes. “I’m trying to round out my game, and I’m tired of hearing that I’m just an offensive defenceman.”
The coach was also pretty proud of his group on Wednesday night.
“Determination and the will to win is a great attribute,” said Boudreau.
Boudreau also commented on his star players shooting the puck more, including Boeser scoring two goals in his last two games, “scorers do that,” said Boudreau. “They can go ten games without a goal and then score ten in seven games. He’s starting to gain his confidence, I’d still like him to shoot more. Hopefully Petey can do the same thing.”
The confidence is rising with this group and it is directly coming from the changes to the coaching staff and management.
We will see what happens moving forward but this has been a completely different team in these last two games.
Uncategorized
Recent articles from Faber