CanucksArmy post game: The Canucks play their worst game of the season and lose 5-2 in Buffalo 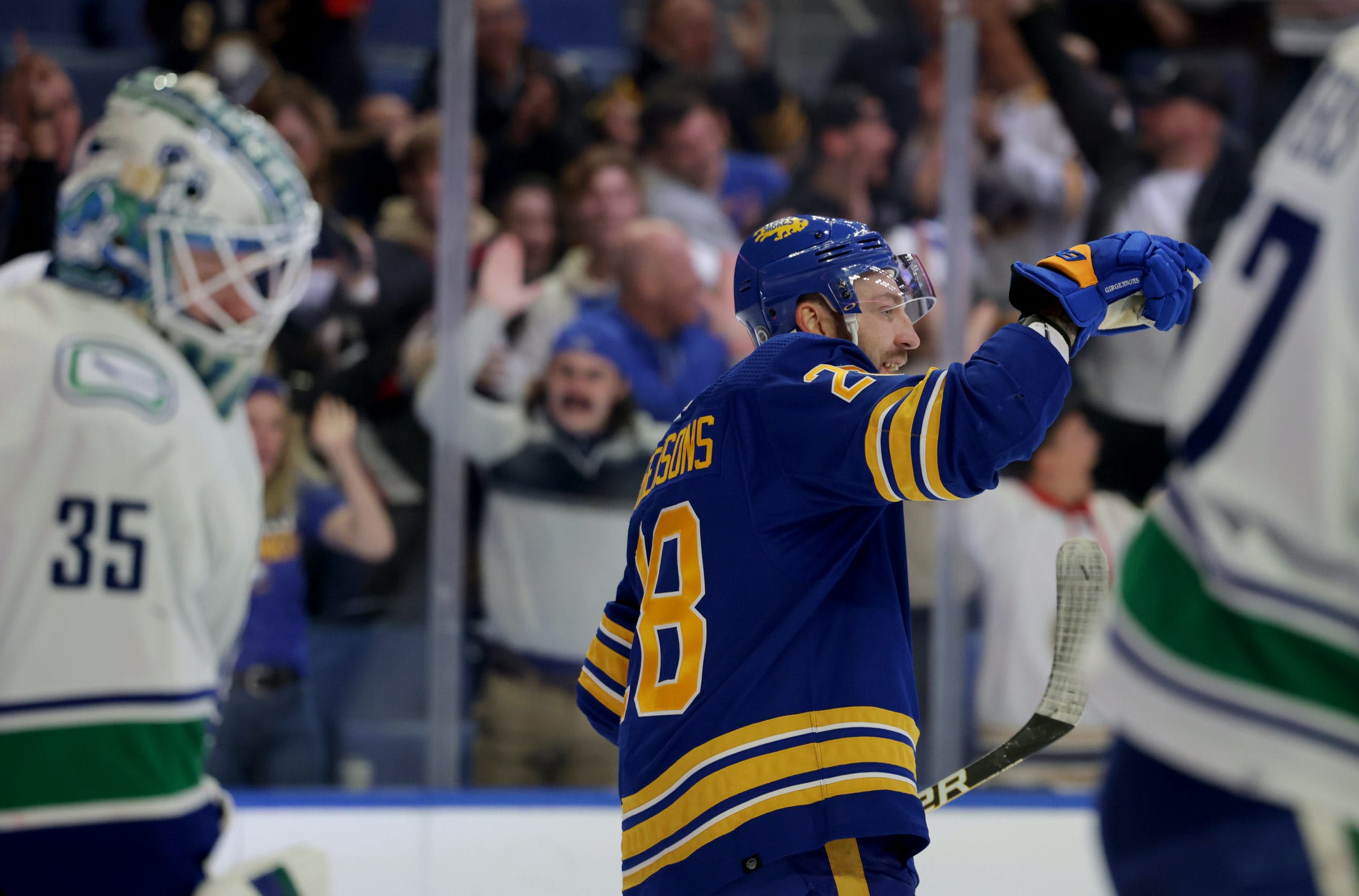 By Faber
1 year ago
After missing the first three games of the season, Brock Boeser made his triumphant return to the Vancouver Canucks’ first line on Tuesday night.
Boeser joined the team to face off against the undefeated Buffalo Sabres for their fourth game of the Canucks’ season-opening six-game road trip.
There were question marks on the defence as the day went on. Quinn Hughes had a maintenance day on Monday but took the morning skate on Tuesday. Canucks’ head coach Travis Green told the media that we may see Brad Hunt or Luke Schenn for Tuesday night. That was exactly the case as Hughes was out of the lineup while Hunt and Schenn slid into the lineup.
Thatcher Demko got the start for the Canucks and Craig Anderson went between the pipes for the undefeated Sabres.

There were a handful of changes to the lineup with not only Hughes but also Kyle Burroughs coming out of the lineup. Hunt and Schenn jumped into the lineup. Hunt played alongside Tyler Myers and Schenn with Jack Rathbone. The result of Hughes leaving the lineup also meant that Tucker Poolman moved up to play alongside Oliver Ekman-Larsson.
As for the forwards, we already mentioned that Boeser was back on the first line and instead of the Lotto Line being put back together, Miller was set to centre the third line with Justin Dowling and Vasily Podkolzin on his wings.
Aside from that, it was the same old, same old.
So, why don’t we get right to it?
Let’s go!

The Canucks were firing shots early on and were able to break the tie just four minutes into the game. The trio of Conor Garland, Bo Horvat, and Tanner Pearson went to work in the offensive zone. Pearson made a great play behind the net and then found Horvat in his hot spot and Horvat made no mistake. 1-0 Canucks.
The Sabres are undefeated and weren’t going to take that goal laying down. They came back when Kyle Okposo came down the right wing and beat Demko over the shoulder on the Sabres’ fourth shot of the period. 1-1 after the Sabres goal.
Both teams were playing pretty sloppy hockey. It looked like a tennis match with the puck replacing the ball as each team just threw it back and forth to each other. It was almost guaranteed that each coach was going to have a freakout in the intermission.
Through the wild play, Justin Dowling had a breakaway where he made a move to the forehand and slid the puck off the post.
The Sabres were just beginning to take control of the shot share when Podkolzin made a spin move to gain the offensive zone. He then passed the puck to Miller who sent it back to the point, where Schenn fired a shot that was tipped past Anderson by Dowling. 2-1 Canucks.

It was a sloppy period that absolutely flew by. The Canucks began by sending a ton of shots towards the Sabres’ net in the first 10 minutes of the game. The period completely flipped in the second half as the Sabres took all the control of the shots and ended up closing out the period with an 11-8 lead.
There were no power plays in the period so at least Travis Green could be happy about his team not spending time in the penalty box. The wide-open back and forth play against is surely something that Green will want to talk about with his group, but overall, the Canucks came out of a clumsy period with a 2-1 lead.

The second period began with the Canucks having early pressure with a scoring chance coming on an OEL point shot through a double screen early in the period. The teams traded icings as the second period was just beginning to crank up with some scoring chances.
Ekman-Larsson and Poolman got caught out in their own zone for over two minutes but were able to keep the Sabres to the outside throughout and they protected their one-goal lead.
It took 26 minutes but we finally saw the first power play of the game when Okposo hooked Boeser down to the ice as he attempted to get in on a scoring chance. The first unit went to work with OEL filling in for Hughes in his absence from the lineup. The first unit was unable to set up anything and the second unit had a couple of scrambly chances but nothing of real substance. The Sabres killed off the penalty to get back to even-strength.
After killing off the penalty, the Sabres were firing on all cylinders. They were testing Demko often but the Canucks’ keeper was up to the task. The Sabres continued their pressure and with that pressure came a double-minor to Tanner Pearson when he caught a Sabres forward in the face during a rush. This sent the Sabres to a four-minute power play. The Canucks killed off the first two minutes with ease and even had a two-on-one opportunity.
They had solid defensive play throughout the penalty and ended up killing off the four-minute advantage but just three seconds later, Zemgus Girgensons scored to tie the game up after an Okposo shot. 2-2 after the Girgensons goal.
The Canucks’ best shift of the second came as the period expired. The Pettersson-Boeser-Höglander trio had a barrage of chances with the addition of Rathbone at the point. It was a hectic final few seconds as Rathbone attempted a shot and broke his stick that created a three-on-one against the stickless Rathbone. Luckily, the seconds ticked away just as the three Sabres forwards hit the Canucks’ blue line.
We were all tied up after 40 minutes and it felt like either team could have been winning by two or three goals if some bounces went their way.

After killing off the Canucks’ power play, the Sabres absolutely took over the period. They finished the period with the Canucks having four scoring chances compared to the Sabres having 11 in the period.
Demko was being left out to dry by the Canucks as they struggled to pick up Sabres in front of the net and were allowing a ton of dangerous chances throughout the first 40 minutes. It was definitely a letdown against a much less-skilled Sabres’ team.

Garland drew a penalty off Rasmus Dahlin just one minute into the period. The Canucks were given a huge opportunity to take the lead at the beginning of the period. Buffalo was able to kill off the penalty and then ended up seizing an opportunity of their own.
A point shot slid slowly on Demko and he kicked the puck out to the left where Jeff Skinner was waiting for the puck. He roofed a backhand over Demko to give the Sabres their first lead of the game. 3-2 Sabres.
The Sabres followed that up by crashing the net hard right after their goal and they swung sticks around Demko until the puck found the back of the net. Schenn was caught in a spin cycle looking for the puck and Tage Thompson got his stick on the puck to bury it and establish a two-goal lead for the Sabres. 4-2 Sabres.
Boeser took a hooking penalty with 8:20 remaining and it opened the door for the Sabres to run away with this one. The Sabres were teeing off on Demko as their penalty killers were standing around like an ICBC lineup and allowing Thompson to tee-off multiple times.
Another opportunity was given to the Canucks when OEL drew a penalty and sent the Canucks back to the power play with just under six minutes remaining in the period. The power play needed to be good on this crucial man-advantage.
The Canucks had two great chances that were both from astonishing plays from Jack Rathbone. He made a strong drive to the net on a couple of pretty dekes and then had a tremendous cross-ice pass to Höglander, who couldn’t quite get a one-timer off and was robbed by a sliding Anderson.
As the seconds ticked away, the Canucks pulled their goalie with three and a half minutes remaining.
The Sabres scored an empty-net goal with about three minutes left. 5-2 Sabres. 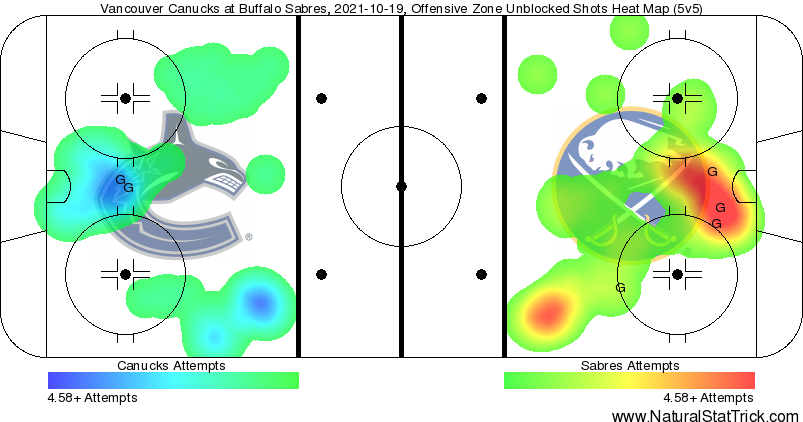 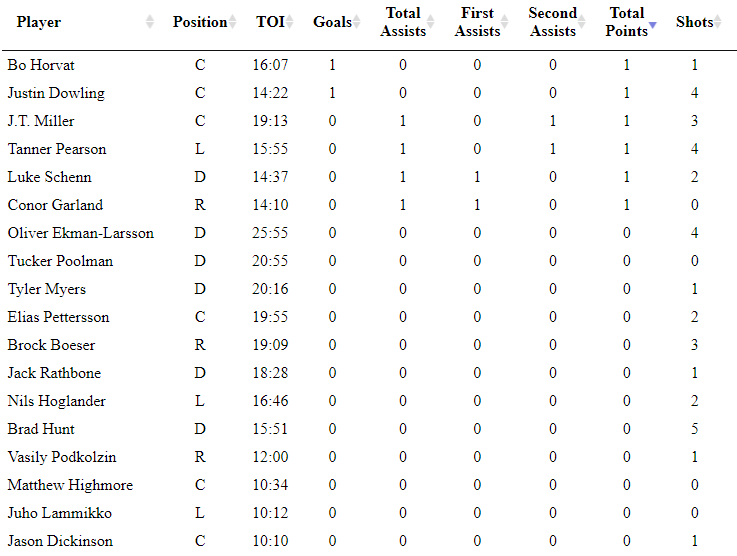 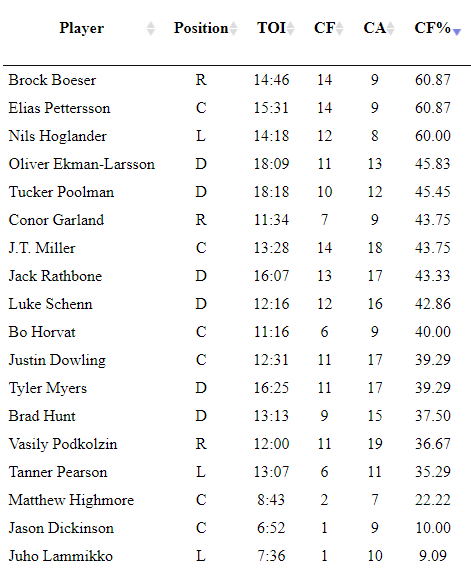 Jack Rathbone was the only player who stuck out in a positive way. He skated the puck through the neutral zone with confidence and was on the ice for half of the Canucks’ scoring chances. There was a lot of bad in this game but Rathbone was a lot of good.

The Canucks were bad in this game. They were outplayed by a much worse Sabres team and struggled to play defence against them. The Canucks were out-chanced at five-on-five by a count of 22-13. The glaring problem was their ability to defend near their own net but there were underlying problems in the offensive zone that held the Canucks back as they were unable to capitalize on many chances.
“We didn’t play good enough to win,” said Travis Green. “I didn’t think we were good enough to win, flat out. We need to play better. Not a little bit better, a lot better.”
This game was a major letdown and to see the Canucks lose back-to-back games against the Detroit Red Wings and Buffalo Sabres should result in fans asking some serious questions about what this team can be this season.
It’s early but these past two games mean a lot.
Uncategorized
Recent articles from Faber