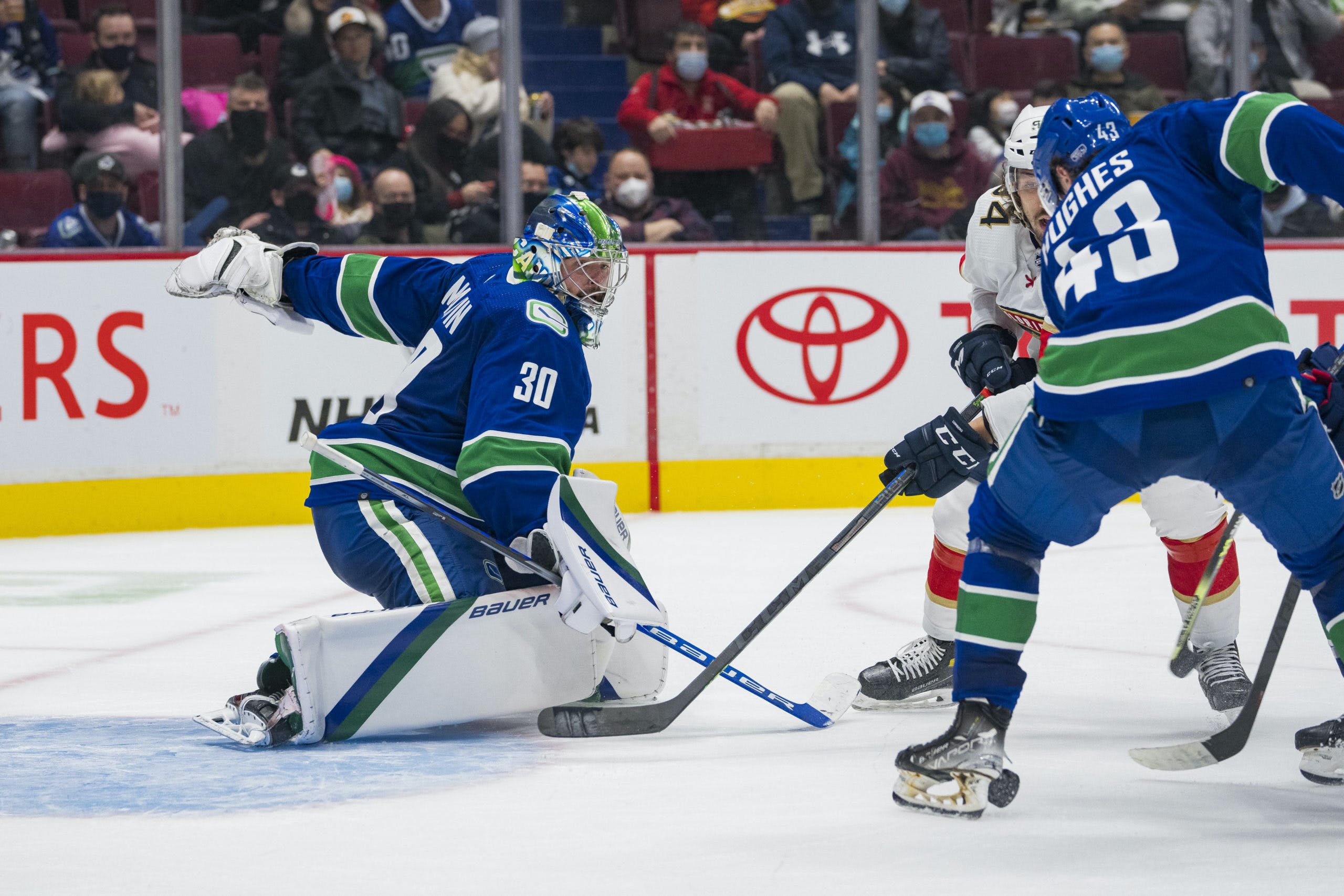 By David Quadrelli
10 months ago
It was almost a storybook finish.
The only thing that would’ve made it better was a Spencer Martin win.
But more on that later.
The Canucks were back at home for the first time in over a month and were playing incredibly shorthanded against the league-leading Florida Panthers.
Here’s how they lined up tonight against the Panthers:

It was the first goaltending matchup between two Spencers in NHL history — and the Canucks had the Spencer who’s got his name etched on the Stanley Cup manning their crease.
Let’s do this!

The game started with Spencer Martin making a pad save after Florida moved the puck into a prime scoring area in the middle of the ice.
The Rogers Arena faithful — albeit at 50% strength — erupted into cheer as they celebrated not only the first save they’ve seen in person by a Canucks goaltender since December 14th, but also the first save by a goaltender who was given one of the tasks of any goalie in the league this season.
The Canucks were playing a high-tempo game off the hop, and although it didn’t result in a goal, the Canucks were getting their chances.
This included a tidy hold at the line by Oliver Ekman-Larsson who fed the puck back in deep and found Nils Höglander all alone on Spencer Knight. Despite Höglander’s best stickhandling efforts, he couldn’t beat the outstretched pad of Knight.
The cheering didn’t stop after every Martin save, and through the first ten minutes of the game, he had already had to make six of them.
With 6:35 remaining in the first period, Elias Pettersson took a phantom hooking penalty to send the Panthers to their first power play.
The crowd erupted in applause after Spencer Martin slid across to deny a great chance for Florida to open the scoring. Martin made two more saves for good measure, and as the penalty expired, Pettersson stepped out of the box and protected the puck nicely, baiting Owen Tippett into taking a slashing penalty.
With four minutes to go, the Canucks’ power play hopped over the boards and struck quickly.
As he so often does, Quinn Hughes walked the line with poise before firing a shot on goal that was tipped by Tanner Pearson before deflecting off of Alex Chiasson. 1-0 Canucks.
For the first time since December 14th, Rogers Arena erupted into a “Bruce there it is” chant. It was enough to make a grown man cry.
Shortly after the goal, Florida had one last grade-A chance of their own after Tippett tried to take a swing at a bouncing puck in front and hammer home a garbage goal.
Fully extended in the splits trying to make himself as big as possible, Martin made the save and to the tune of one last raucous applause to end the period, the Canucks left the ice up by a goal.
“I wasn’t as amped up as much as I thought I’d be, given how much it meant to me to get a start,” said Martin. “I felt incredibly blessed, just to know how hard it is to get to this level… It’s hard to put into one answer.”

The Canucks came out to start the second and evened up the shot total at 12 apiece in the first four minutes after leaving the first period down 11-8 in shots.
Lucas Carlsson took a cross-checking penalty after a hardworking shift from the Sheldon Dries line to send the Canucks back to their second power play of the game.
Almost instantly, the Canucks found Tanner Pearson all alone near the half wall with time and space to walk in and rifle a shot. Pearson’s shot beat Spencer Knight but rang off the post before Florida corralled the puck and sent it down the ice.
The rest of the power play looked exactly how you’d expect a power play made up of a bunch of guys who haven’t really played on the power play together would look.
Elias Pettersson turned in a strong shift and sprung Höglander in on a partial breakaway in on Knight. Höglander made a move to the forehand but couldn’t beat Knight blocker side.
Höglander had a couple more grade-A chances on Knight, but the Florida netminder appeared to have his number in this one.
Spencer Martin continued to make some key saves as the second period went on, and the Canucks did a relatively good job at keeping chances to the outside.
Matthew Highmore was sprung up ice and made a mad dash around Radko Gudas after chipping the puck in deep. Seeing Highmore was going to get around him, Gudas put the grab on Highmore and was called for holding to send the Canucks back on the power play.
The best chance of the man advantage was a one-timer from Boeser, but Knight managed to steer the puck away from danger as the penalty expired.
Martin made a big save off of Carter Verhaeghe and the momentum swung in the Canucks’ favour after the energy line of Tyler Motte, Juho Lammikko, and Matthew Highmore hopped over the boards.
The trio managed to keep the puck in deep and generated two or three quality chances. The shift was capped off by Motte landing a thunderous hit on Anthony Duclair after the Panthers’ forward finally managed to break the puck out of the zone for his team.
The Canucks entered the third period still up by one goal, and Florida was sure to make a strong push to tie this one up.

To no one’s surprise, the Panthers came out firing to open the third.
After Höglander took a tripping penalty in the offensive zone, the Panthers wasted little time and struck with the man advantage to tie this one up 1-1.
The teams were neck and neck in this one as both sides tried to pull ahead, and with just over 11 minutes remaining in the game, Aaron Ekblad gave the Canucks a chance to do just that after he slashed Brock Boeser’s stick and was sent to the box.
On the ensuing power play, Elias Pettersson got to work.
He cycled the puck around with poise and snapped a hard pass to a wide-open Brock Boeser, who let go of a one-timer that rang hard off the cage of Spencer Knight.
The shot totals were close all period long, the Spencers were both sharp, and space was limited in front of them.
This one was so tight, almost like a playoff game.
Elias Pettersson was tripped in the neutral zone but the refs didn’t call it, which led to Florida having a strong and dangerous-looking sequence in the offensive zone, but once again, Spencer Martin was there to make a key stop and swallow the puck up with ease to calm his team down.
As time dwindled down, Martin made two more key saves and got the Canucks into overtime.

Overtime put the Canucks’ lack of personnel on full display.
The Panthers generated four shots on goal and controlled the zone to a point where Juho Lammikko was stuck on the ice for 3 minutes and 14 seconds.
Somehow, the Canucks bent but didn’t break.
Off to shootout we went!
Brock Boeser scores to open the shootout. 1-0 Canucks.
Jonathan Huberdeau tried to pull off the Forsberg but Martin held on and kept his left pad on the ice to deny the chance.
Elias Pettersson’s shot was stopped by Spencer Knight.
Anton Lundell came in with speed and beat Martin on the backhand. 1-1.
Quinn Hughes made a nifty move to the backhand but was denied by Knight.
Aleksander Barkov made a move to the backhand and tucked the puck behind Martin to give the Panthers the win. 2-1 Final. 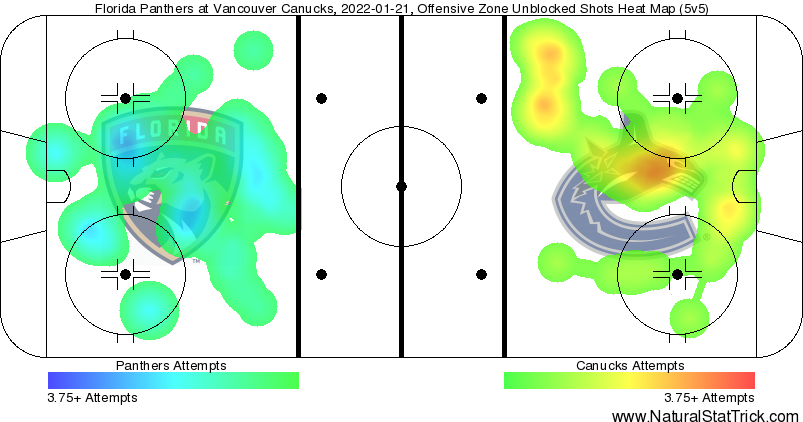 Just getting a point against the top team in the league in a game in which they were missing Bo Horvat, Conor Garland, J.T. Miller, Thatcher Demko, and Jaro Halak among others, with a career AHL goaltender in net is a great feat in itself.
The Canucks played a strong game tonight, and against all odds, made this one a coin-flip in the end.
“He was awesome,” said Tyler Myers. “He came in and looked like he had a ton of confidence. You love to see a story like that.”
“I wasn’t as amped up as much as I thought I’d be, given how much it meant to me to get a start,” said Martin. “I felt incredibly blessed, just to know how hard it is to get to this level… It’s hard to put into one answer.”
The Canucks gutted out one point in a game that many thought they could get blown out in, and Spencer Martin was named the first star of the game.
The Canucks, and Martin specifically, can certainly hold their heads high after that performance and can carry that momentum into their Sunday tilt against the St. Louis Blues at home.
Uncategorized
Recent articles from David Quadrelli