CanucksArmy post game: Canucks drop last game of road trip to Blues in first of back to back games 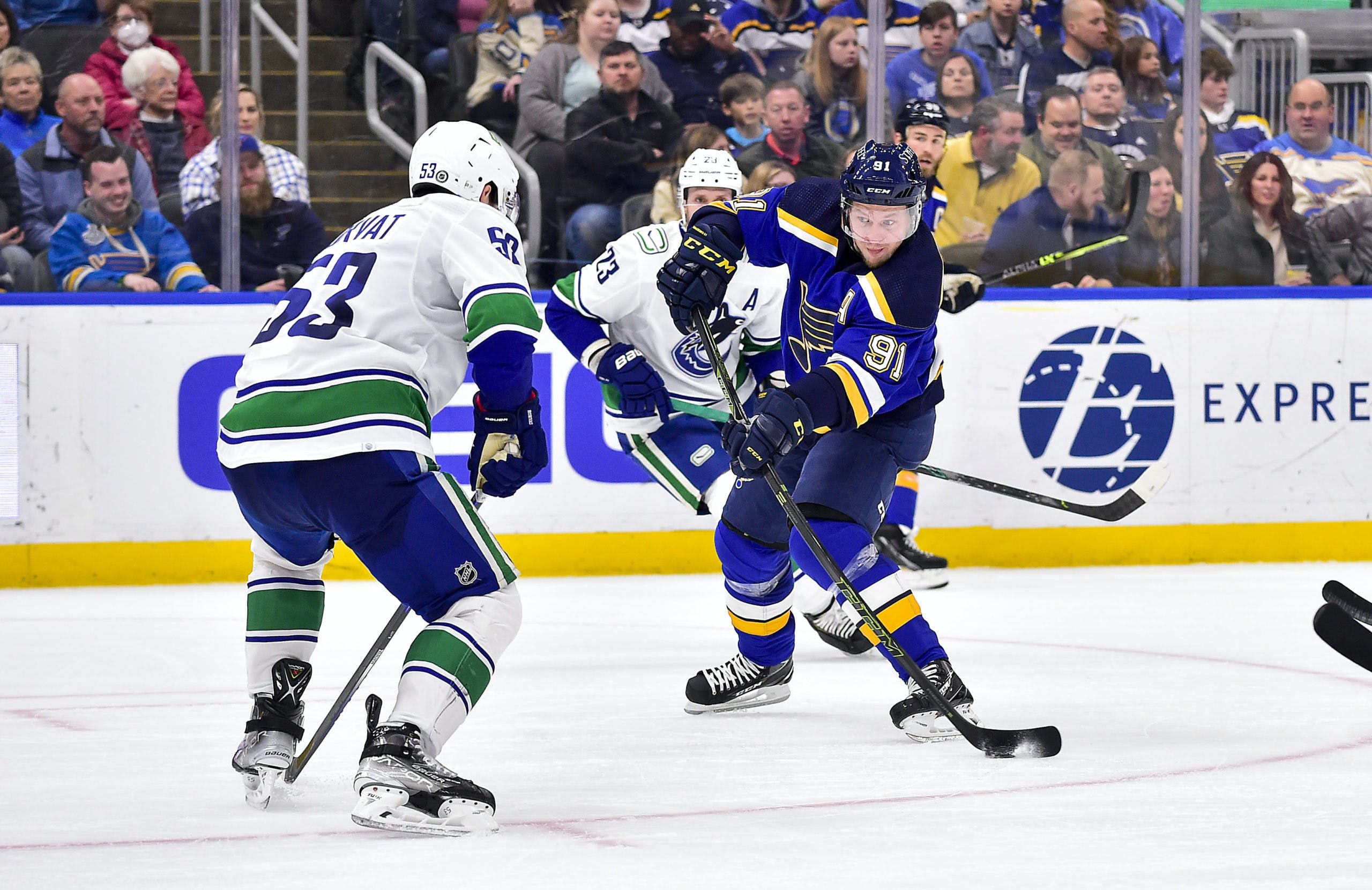 By David Quadrelli
8 months ago
The Canucks were in St. Louis to wrap up their Central Division road trip and were hoping to finish strong with their first of back-to-back meetings with the Blues.
The Canucks were without Matthew Highmore once again. Head coach Bruce Boudreau said pregame that Highmore is now listed as week-to-week instead of day-to-day, which is certainly not the news the club was hoping to hear.
As a result, Will Lockwood slotted into the lineup for a second straight game.
Let’s get to the Canucks’ full lineup vs. St. Louis.

Jaroslav Halak started in goal for the Canucks, with Ville Husso opposite him for the Blues.
Let’s do this!

Early on, this game was a track meet, and it was the Blues who struck first.
After Halak made some nice saves early, the Blues got a weird one. Vladimir Tarasenko banked a shot off of Will Lockwood’s stick, which sent the puck fluttering into the air above Halak. Unbeknownst to the Canucks’ netminder, the puck landed in the blue paint, and was buried by Marco Scandella. 1-0 Blues.
The Canucks took the first penalty of the game when Conor Garland tripped Jordan Kyrou with just under nine minutes to go in the first.
Halak made a nice glove save off of a Justin Faulk shot, but the Canucks killed off the Garland penalty.
But Garland did something on his very next shift that was much worse than taking a penalty.
Garland attempted to stickhandle in the St. Louis zone but was stripped of the puck. This sent the Blues the other way on a 2-on-1, and David Perron made no mistake in pulling the trigger on a one-timer that Halak never had any chance of stopping. 2-0 Blues.
“He didn’t play very well, and I need more out of him,” Boudreau said post game of Garland’s performance in this one. “I think he’s pressing really hard to score because he hasn’t scored in a while, but the idea is you can’t do it all by yourself when you’re pressing. You’ve got to use your teammates and I think he could’ve passed the puck, he carried it a little too much, but he was one of the forwards I didn’t think had a very good game.”
The Canucks were awarded their first power play of the game after Toropchenko hit Brad Hunt with a bit of a late knee with 48 seconds remaining in the first.
The first unit couldn’t convert, but had over a minute to work with to start the second period.

The Blues killed off the penalty, and the Canucks were credited with just one shot on the power play.
The two sides went back and forth with not a whole lot happening aside from neutral zone turnovers before Conor Garland and Tanner Pearson created two of the Canucks’ best chances of the period in rapid succession.
First, Garland cut to the middle and let go of a wrist shot that was kicked away by Husso. This led to a rebound that Pearson attempted to bury, but desperate and scrambling, Husso managed to keep the puck out of the net.
Vasily Podkolzin blocked a point shot that he appeared to take off the inside of his wrist, but appeared no worse for wear as he didn’t miss a shift and even got a solid wrist shot off on Husso on his very next shift.
The Pearson-Miller-Garland line had an especially strong period in which they controlled possession and cycled the puck with poise on multiple occasions. They didn’t score a goal, but they were no doubt the Canucks’ most dangerous line in this period.
Side note: He got caught with his head down at one point, but Will Lockwood had a solid second period in which he threw his weight around quite a bit.
Bo Horvat took a penalty after he cleared the puck over the glass from his own end with just under four minutes remaining in the second.
The Canucks killed off the penalty, and Elias Pettersson nearly brought the Canucks within one heading into the third.
He came in off the rush and snapped the puck between Husso’s legs. Unfortunately for Pettersson and the Canucks, the puck hit the post behind Husso and stayed out.
The Canucks generated plenty of shots on goal in the second, but still remained down by a pair heading into the third.

The Blues got some puck luck after hemming the Canucks in their end early in the third. Vladimir Tarasenko banged home a loose puck that took a weird bounce off of Halak to make it 3-0 Blues.
“I didn’t think I brought it today,” said J.T. Miller, who was on the ice for the Blues’ third goal. “I just wasn’t as engaged as I needed to be for some reason. Maybe a little tired, but I’ve got to take some of the onus on myself to play a bit better.”
Shortly after, local boy and Burnaby Express legend Brad Hunt led the Canucks on a 3-on-1 alongside Juho Lammikko and Alex Chiasson.
Like he was back ripping short side cheese on the nets at Bill Copeland, Hunt beat Husso to get the Canucks on the board. 3-1 Blues.
Nick Leddy was called for a slash on J.T. Miller to give the Canucks another power play and another chance to trim the St. Louis lead further.
Halak — yes you read that right, Halak — had to make two huge saves as the Blues were the ones that generated the best chances of the Canucks’ two-minute man advantage.
Brad Hunt took a penalty with just under ten minutes remaining as the Canucks attempted to play catch up.
The Canucks killed off the penalty, and with over three minutes remaining, pulled their goalie in a last-ditch attempt to close out this road trip by gaining ground in the standings.
Instead, Vladimir Tarasenko tallied the 500th point of his career by burying an empty netter and putting the icing on the cake.
4-1 Blues final. 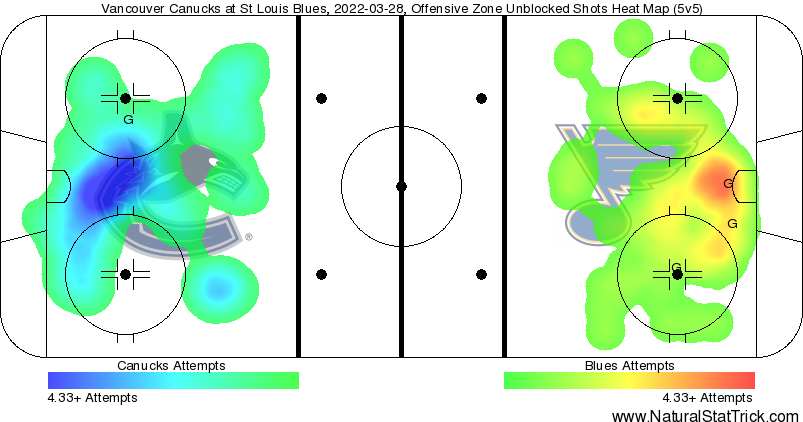 The Canucks finish the road trip with a very respectable five of a possible eight points against some rather tough opponents.
That’s all fine and dandy, but the math continues to look daunting for the Canucks, who have — give or take — three or four regulation losses left to give this season to truly stay in the playoff hunt.
“I didn’t think we were very good tonight,” said head coach Bruce Boudreau post game. “We came up really flat in the first period and got behind two goals, giving them a little life. I thought our second period was better, but we didn’t get rewarded for it. And then when they score in the first shift of the third period, I just didn’t think we had enough guys playing with the sense of urgency that is needed at this stage of the season.”
With 14 games remaining, that certainly seems daunting, but stranger things have certainly happened.
The Canucks have to go 11-3-0 to close out the season just to get to 95 points. Even then, there’s no guarantee that’ll be good enough to secure a playoff berth.
These two teams will do it again on Wednesday night when the Blues visit Vancouver to kick off the Canucks’ next homestand.
Uncategorized
Recent articles from David Quadrelli