CanucksArmy post game: Canucks lose 5-1 to Leafs and changes need to be made 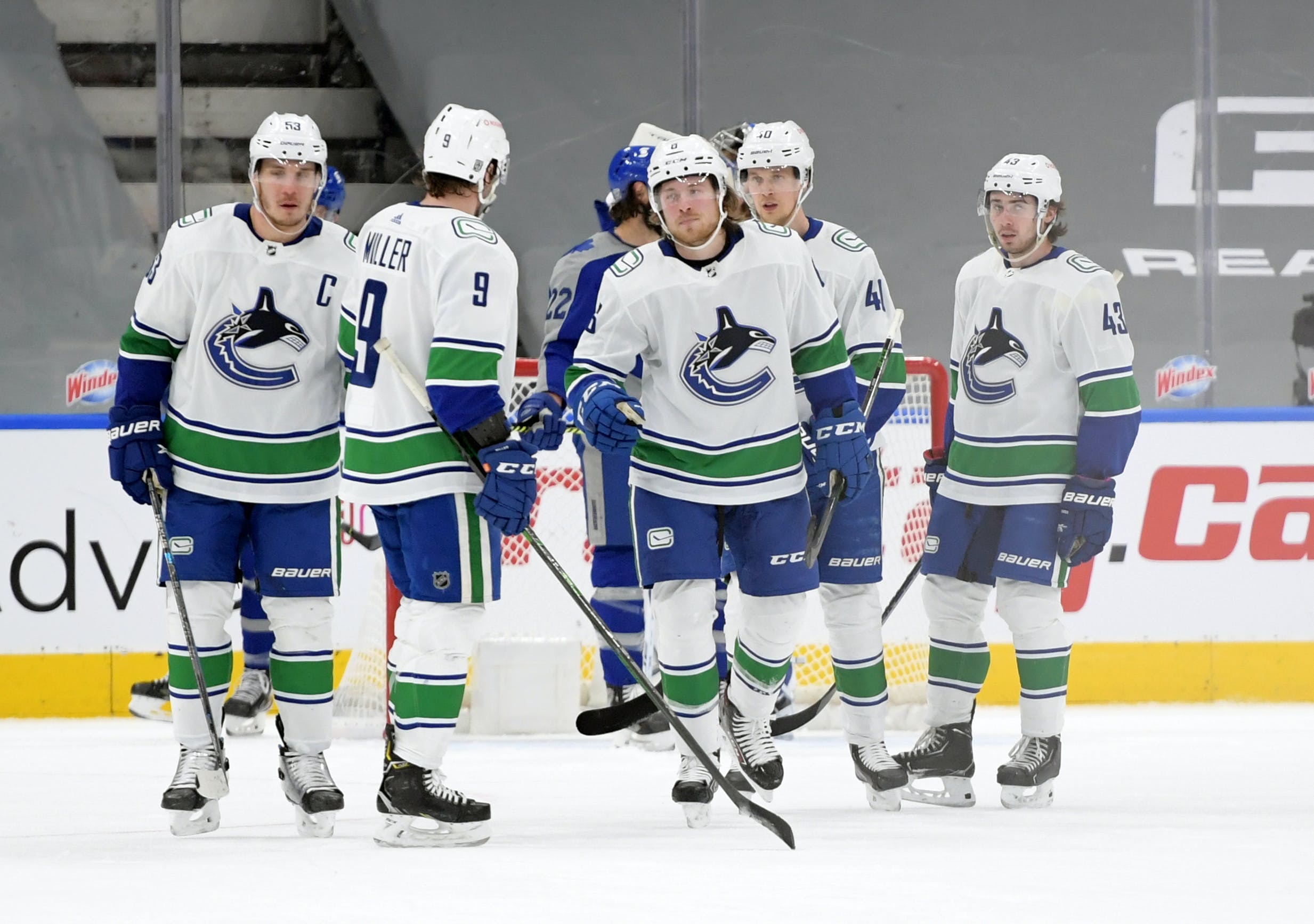 By Faber
1 year ago
After a 7-3 thumping on Thursday, the Vancouver Canucks got a second crack at the Toronto Maple Leafs on Saturday.
They followed up their thumping with a shellacking on Hockey Night in Canada. The Leafs dominated in every area of the ice and won 5-1.
Travis Green made multiple changes to his lineup, throwing in Justin Bailey and Loui Eriksson for their first games of the season.

The sun was shining in Vancouver for puck drop as they moved into a four o’clock start for this one.
Braden Holtby got the call to the crease for the Canucks while Frederik Andersen patrolled the blue paint for the Leafs.
Postgame word counts are a hot topic right now so let’s not waste any more, it’s game time.
Let’s go!

The Leafs were all over the Canucks to begin the game. Their onslaught of pressure led to Alex Edler taking a penalty just 3:19 into the game.
Wayne Simmonds got some time in the edge of the crease and flipped a wrist shot over Holtby’s shoulder on the short side and the Leafs took an early 1-0 lead.
Just about 10 seconds after the goal, Edler took another penalty, sending the red hot Leafs power play back out on the ice. Luckily, the Canucks killed off the second penalty but the momentum was severely in the Leafs’ favour after a hot start and two power play attempts.
Things weren’t getting better for the Canucks. At the halfway point of the period, the Leafs had attempted 16 shots while the Canucks had just one shot attempt.

Ouch.
Elias Pettersson was sent in on a partial breakaway and made a move to the backhand before being stopped by Andersen. It was the first real scoring chance of the game for the Canucks.
Just after the Canucks finally had a bit of a push back, the Leafs struck again. Auston Matthews came flying in on Holtby and ripped a shot off the crossbar and in to make it 2-0 Leafs.
J.T. Miller took a high stick with 4:18 remaining and the Canucks went to work on their first power play attempt of the game, and 50th attempt of the season.
Pettersson rang his league-leading seventh post during the man advantage but the Leafs killed off the penalty.
The Canucks began to look better as the period went on and even generated some scoring chances at even strength.
The period ended with the Leafs outshooting the Canucks 9-7 and leading 2-0.

The Canucks came out with more energy in this period. They had a few early scoring chances but the Leafs were still all over them and controlling the possession time.
The possession time brought another goal for the Leafs as Zach Hyman drove the net and tipped in a perfect pass to make it 3-0 Leafs.
At the halfway point, this was one of the toughest games to watch this season. The Leafs gained the zone with ease on almost every attempt. They wore down the Canucks so much that every player was dead tired when they were able to get the puck out of their zone.
This team feels broken.
Tyler Myers took an elbowing penalty to give the Leafs another power play attempt with 7:58 remaining in the period. The Canucks killed off the penalty, even with the Leafs throwing shot after shot at Holtby.
The Canucks got on the board when they put Pettersson and Miller together with Nils Hoglander. Miller got some momentum and ripped a slap shot past Andersen.
You can’t help but laugh at this point…
The Leafs challenged the goal for offsides and the goal was overturned. 3-0 Leafs.
As the second period was winding down, Travis Green threw the lines into a blender. None of his starting four lines were together to finish the period.
Shots were 23-17 after 40 minutes and this Canucks team simply doesn’t look good enough to compete with the Leafs.

Hughes had a horrible giveaway that gave Matthews another free break-in on a Canucks goaltender and he buried it. 4-0 Leafs.
Wayne Simmonds tipped a shot past Holtby. 5-0 Leafs.
The Canucks earned a power play with 13:42 remaining.
They did not score.
Later, Hughes took a shot that was tipped in by Brock Boeser and the Canucks scored a power play goal late in the game.
5-1 Leafs. 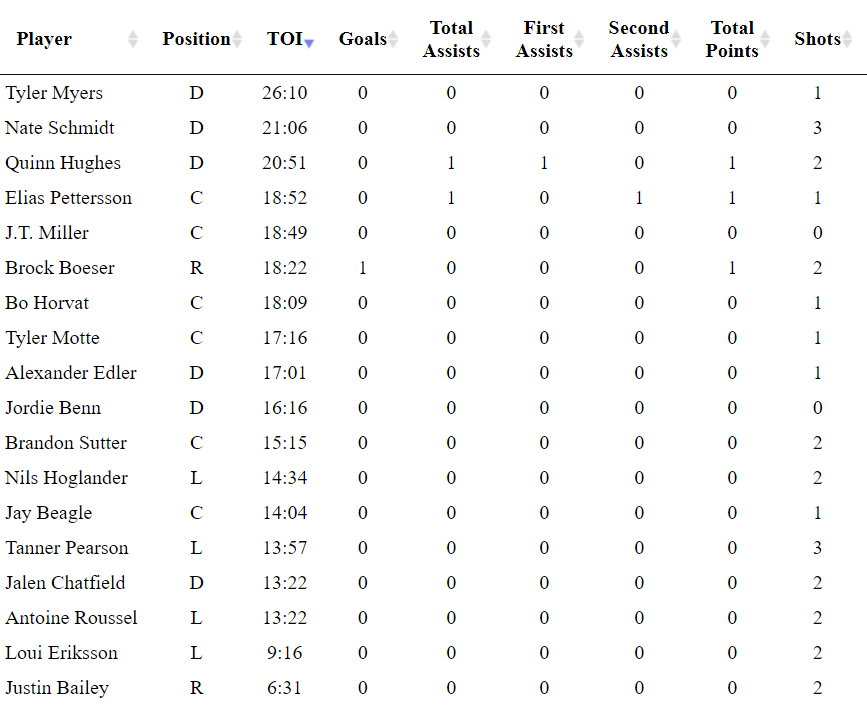 The turtles don’t deserve this.
The only nice thing we can say.
The only win for the Canucks.
That long?

This game was crucial for the team on the ice and the team in the management group. Both were let down on Saturday night.
The Canucks couldn’t skate with the Leafs at all. They had to fight just to get the puck out of their own zone and by the time they accomplished that simple task, they were too tired and had to dump the puck in and change. Rinse and repeat.
Saturday’s game felt like the worst parts of the Vegas series back in the bubble. This team didn’t belong on the same ice as the Leafs and you have to believe that during a prime time Hockey Night in Canada game, changes are coming.
It might not be tonight or tomorrow, but something needs to change with this organization. Whether it’s within management or with the people down at ice level, something needs to change.
It needs to happen because the organization is in the midst of losing the fan base.
Uncategorized
Recent articles from Faber