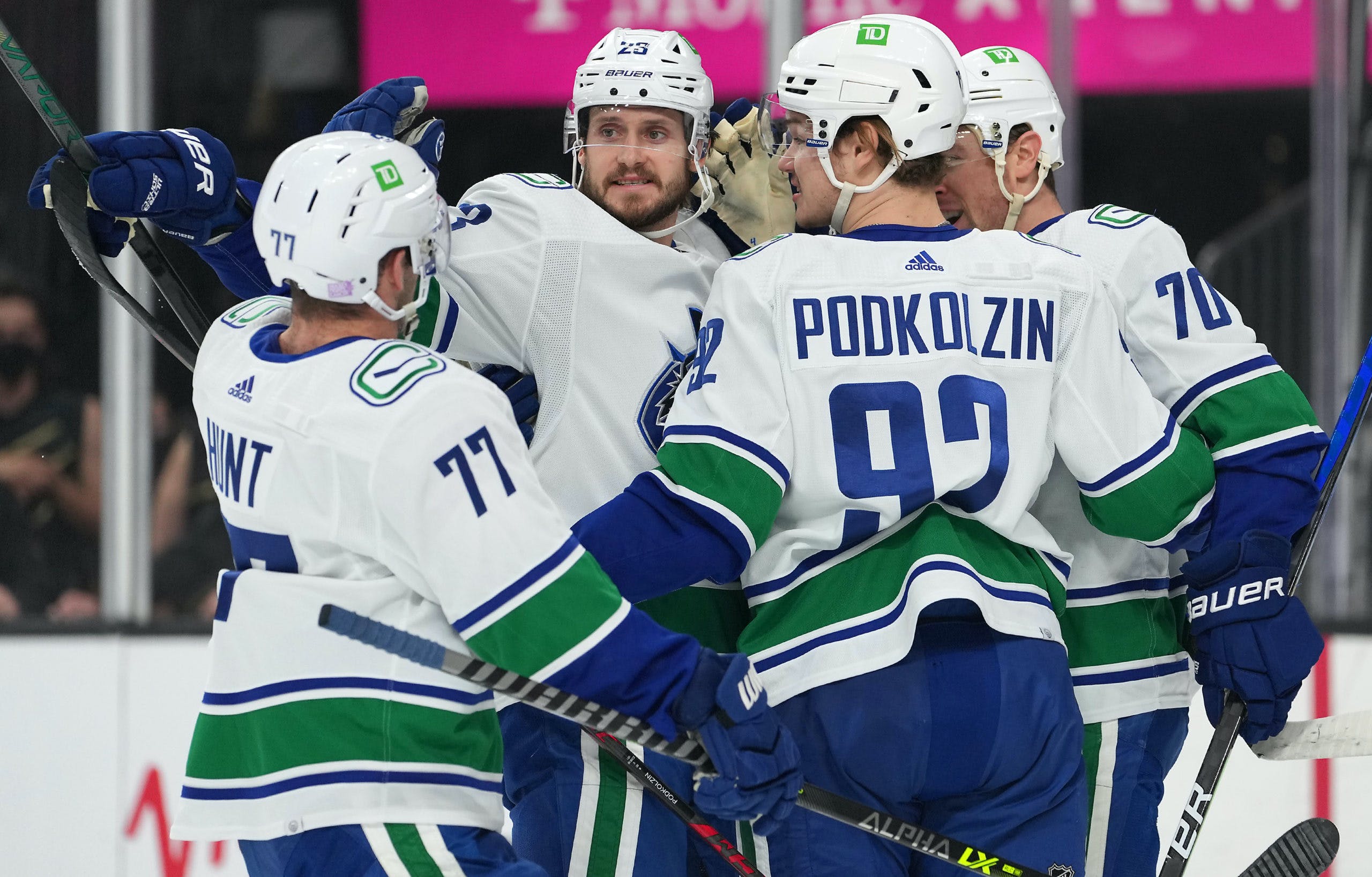 By David Quadrelli
1 year ago
The Vancouver Canucks were in Vegas tonight for what they made it clear was a statement game for them after an embarrassing 7-1 loss to the Colorado Avalanche on Thursday night.
The Golden Knights were certainly a good litmus test to see where this team is really at.
With the pressure mounting, here’s how the Canucks lined up tonight:

Alex Chiasson slotted back into the lineup, Jason Dickinson moved to the wing, and J.T. Miller lined up at centre.
The Canucks called on Thatcher Demko to tend their crease while the Golden Knights tabbed Robin Lehner as their starter.
Let’s do this!

The Canucks haven’t gotten many this season, but sometimes you get a bounce.
To start the game, the Canucks received a little puck luck from the hockey gods that allowed them to get off on the right foot tonight.
After the Golden Knights found themselves on a 2-on-1 early, and a shot attempt into a wide-open net was missed by Michael Amadio, the Canucks sprung with some momentum the other way.
J.T. Miller, who said today that his team would be better, opened the scoring after finding himself on a partial breakaway and made no mistake to open the scoring to make it 1-0 Canucks early.
Shortly after, Conor Garland got tangled up with Mark Stone after Stone landed a big hit on Garland. Stone got a roughing penalty and the Canucks went onto the power play early.
The first unit kept up their recent habits of good movement and got some good looks off on Robin Lehner. It wasn’t until the second unit came out that the Canucks managed to convert. Tanner Pearson redirected a sharp pass to make it 2-0 Canucks.
Shortly after the goal, Jason Dickinson took a high-sticking penalty and put the inefficient Vegas PP up against the also-inefficient Canucks’ PK.
With the help of Thatcher Demko and a strong forecheck by the speedy Justin Bailey, the Canucks managed to kill off the two-minute penalty.
The two teams went back and forth with some tight checking and no real chances of substance, but the door was blown wide open for the Golden Knights after Oliver Ekman-Larsson was assessed a four-minute penalty for coming to the defence of Vasily Podkolzin, who was on the receiving end of a big hit from Brayden McNabb.
Shortly into the kill, Justin Bailey took a hooking penalty to put the Golden Knights on a 5-on-3 power play late.
Vegas managed to convert and cut the lead down to 2-1 Canucks heading into the second period.

The Canucks managed to kill off the rest of the Bailey penalty, and we were treated to some high-flying hockey once these teams got back to even strength.
The Golden Knights had an odd-man rush that ended with Jonathan Marchessault ripping the puck wide, which sprung the Canucks in transition.
Brock Boeser broke into the zone and let go of a hard wrist shot that beat Lehner glove side but rang off the post.
Shortly after the flurry of chances, Reilly Smith found himself with a chance in tight after Madison Bowey got beat at the Vancouver blue line. Smith ripped the puck over Demko’s glove to tie this one up. 2-2.
Some atrocious defensive zone coverage from Tyler Myers, who had had a strong night up to that point, allowed Brayden McNabb to walk in and give Vegas a 3-2 lead.
Shortly after the goal, Chandler Stephenson took a slashing penalty to send the Canucks’ back to the power play.
The Canucks elected to use their second unit for the majority of this power play. With just under a minute left on the man-advantage, the first unit hopped over the boards and went to work. Brock Boeser let go of the best chance of the power play on Lehner, but the Canucks ultimately couldn’t beat the Vegas netminder, going 0-for-2 on the night up to that point.
After the kill, the Canucks had some more puck luck go their way.
Nils Höglander let go of a shot on Lehner that the Vegas netminder thought he had underneath him. Instead of doing a fly-by, Höglander slammed on the brakes and managed to find the puck, which was sitting loose underneath Lehner’s pads.
Under the check of former Canuck Ben Hutton, Höglander managed to bury the puck to tie this one at 3-3.
Shortly after his goal, Höglander took a tripping penalty after getting his stick tangled in McNabb’s skates.
Seconds into their man-advantage, Vegas took a too many men on the ice penalty to take themselves off the power play.
Oliver Ekman-Larsson took an interference penalty that put the Canucks back on the penalty kill with 18 seconds remaining in the second period.

The third period started with a Vegas goal just two minutes in as Jake Leschyshyn scored after blown in-zone coverage by the Canucks made it 4-3 Vegas.
53 seconds later, it was Höglander who once again dragged his team back into the fight, burying a rebound to make it 4-4.
This was quickly turning into a barnburner as both teams pressed.
There was a moment where Canucks fans held their collective breath when J.T. Miller appeared shaken up at the bench after a collision with Keegan Kolesar. When the game had a TV timeout, Miller hopped over the boards to test out whatever was ailing him, and could be seen skating gingerly.
He didn’t miss a shift and stayed at the bench.
With just over 12 minutes remaining in the third and the game tied at four, Thatcher Demko was called for a delay of game penalty on this play:
Travis Green didn’t hold back when talking about this play post game.
“I don’t usually complain about refereeing, but the call against Demko was atrocious and the call against OEL — the double minor — was very questionable for me as well. And both were critical parts of the game.”
Green added that he never got an explanation from the officials, and that crews came out to fix the post during the previous TV timeout because the post had come off the post multiple times already.
The Vegas power play, which was 1-for-5 at this point in the game, managed to convert in a hurry when Marchessault sniped one blocker side on Demko to make it 5-4 Vegas.
Brayden McNabb took an interference penalty to send the Canucks back on the power play, but the Golden Knights were the ones that got the best chances during the next two minutes.
If it wasn’t for Demko, the Canucks’ power play would have been an absolute disaster.
The Canucks didn’t score on the man-advantage and were back to even-strength to try to claw their way back once again.
Unfortunately for the Canucks, things didn’t get better.
After Miller bobbled the puck at the Vegas blueline, the Golden Knights headed the other way on an odd-man rush. Evgenii Dadonov managed to convert after a slick pass from Mark Stone to make it 6-4 Vegas with just over five minutes remaining.
The dread was poured on further, as Tyler Myers and Thatcher Demko got their signals crossed which resulted in Vegas making it 7-4 with just over four minutes remaining.
Jason Dickinson and Ben Hutton dropped the gloves with just over a minute remaining, and the Canucks ultimately fell by a final score of 7-4. 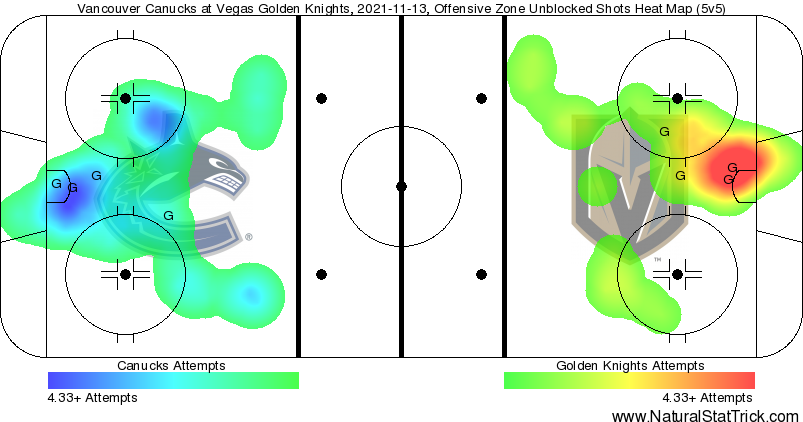 It was another game in which the Canucks played well at even strength and likely deserved a better fate. But the fact of the matter is, they’ve given up 14 goals over the past two games.
The club’s current road trip couldn’t have gotten off to a much worse start than how things have gone for them so far.
Francesco Aquilini was in the building tonight and will be with the team when they play the Anaheim Ducks tomorrow night.
If the Canucks get a similar fate tomorrow, all bets are off as to what could happen as a result.
Puck drop from Anaheim is at 7 PM tomorrow.
Uncategorized
Recent articles from David Quadrelli