CanucksArmy post game: Canucks fail to give Jaroslav Halak much support in a shootout loss to Kings 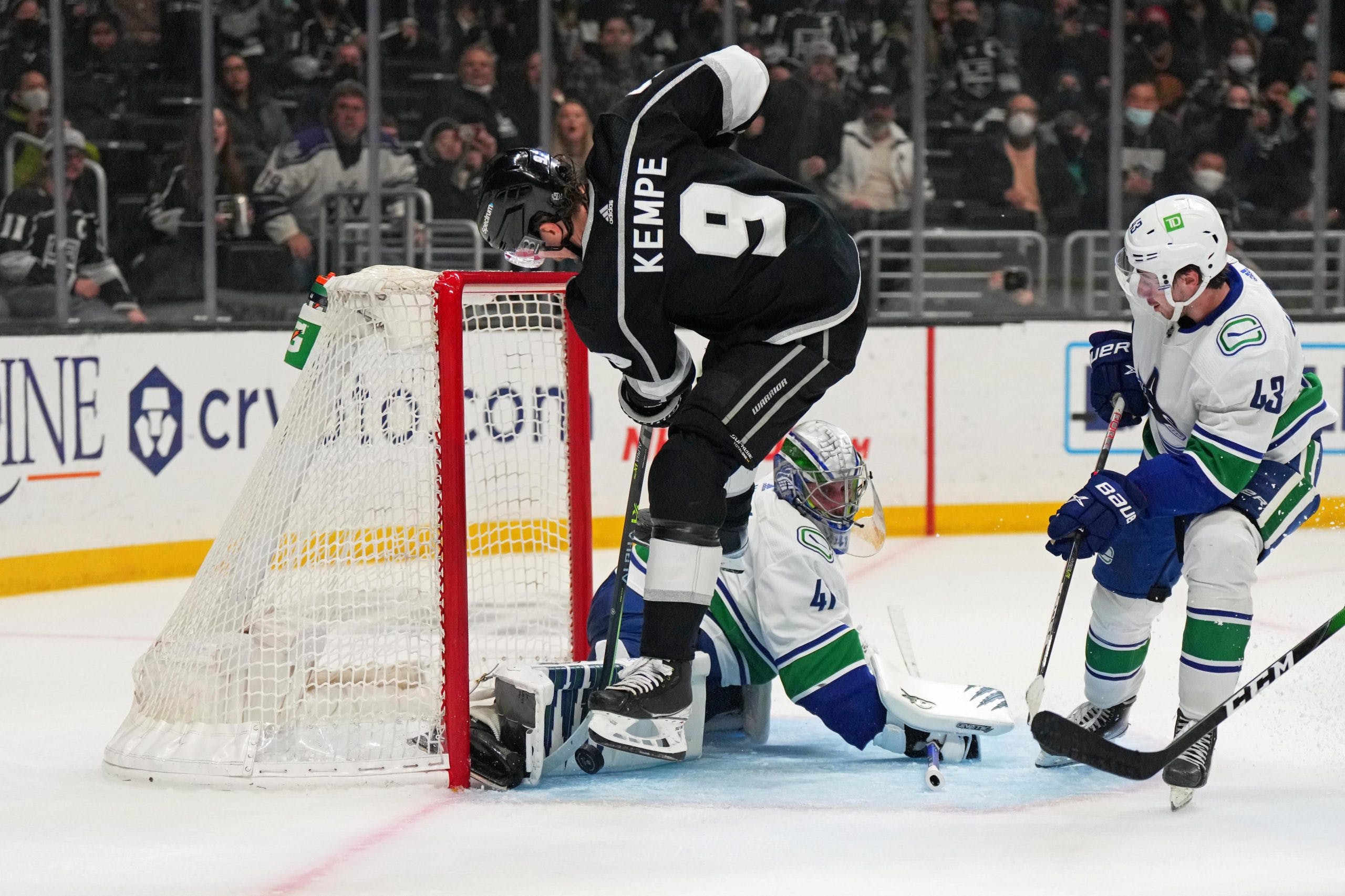 By Faber
10 months ago
Christmas came late this year with the Canucks returning to action on Wednesday and coming right back with another game on Thursday night.
After a come from behind, overtime win against the Anaheim Ducks, the Vancouver Canucks rolled into Crypto.com Arena to stake their seven-game win streak against the diamond-handed Los Angeles Kings.
Justin Dowling entered the NHL’s COVID protocol on Thursday afternoon. Matthew Highmore’s bullish style of play was going to be back in the lineup as he was taken off of injury reserve and reinserted onto the active roster.
Thatcher Demko was given the night off after a solid performance against the Ducks and that meant that Jaroslav Halak was going to hodl down the crease.
As for the Kings, they sent Jonathan Quick to the net and were hoping that his play wouldn’t dip as the red-hot Canucks rolled into town.

It was a similar lineup for the Canucks aside from the Dowling-Highmore swap due to COVID protocol, Kyle Burroughs swapping in for Brad Hunt, and Halak getting the net.
It’s time for puck drop, so we won’t waste any more time.
Let’s go!

There was a lot of continuous action in the opening act of the first period. The Canucks had pressure in the first couple of minutes but the Kings took control of the game for the next five minutes or so. The game moved fast as there was continuous play that lasted over 13 minutes.
There wasn’t a lot that happened in the slow play. Each team gained the red line and dumped the puck in. It had Canucks Twitter getting bored.
Neither team was taking charge in the first period and it felt very similar to the first period on Wednesday night against the Ducks. Quinn Hughes had a strong drive to the net from the left side and just lost the handle as he made a move to the backhand while staring down a yawning cage.
That was about it. A very boring period of hockey that resulted in a scoreless tie after 20 minutes.

Well, there’s wasn’t many thoughts from the period. It was pretty slow. Let’s hope for more action in the second!

There was much more pace in the opening five minutes of the second period. The Kings rang a shot off the crossbar and Highmore couldn’t get a shot off of a rebound as he found himself staring at a wide-open net after some great puck-handling from Quinn Hughes.
The Kings created some panic in the Canucks’ defensive zone. They forced a turnover off of Hughes and Luke Schenn, and fired a long shot that was tipped by Brendan Lemieux and past Halak. 1-0 Kings.
The Kings went to the power play with just over seven minutes remaining in the period and they were all over the Canucks for the entirety of the two minutes. After the penalty expired, the Kings continued pressure on the Canucks as the long change in the second period made it tough for the Canucks’ players to get a change. Halak covered the puck and the Canucks earned a much-needed rest.
We began to see some of Boudreau’s in-game line juggling as Elias Pettersson hopped on the wing of J.T. Miller and Tanner Pearson’s line.
Halak made a couple of big saves late in the period as the Canucks continued to struggle to give Halak any goal support.
The Canucks finished the period with three shots compared to the Kings’ 16. For the second night in a row, the Canucks went into the second intermission trailing by a score of 1-0.

The Canucks’ count of three shots in the period was worrisome and they needed to bring more effort in the final frame.
Halak stood tall as he stopped 15 of the 16 shots he faced in the period.

Tyler Myers hooked Lemieux on a breakaway on the first shift of the period and that set up a penalty shot for Lemieux. He tried to feed the puck through Halak’s five-hole but Halak was up to the task and shut it down easily.
Even within the first three minutes of the third period, you could see the Canucks having much more offensive pressure. Hughes had a good opportunity as he walked down into the slot and fired a shot high off of Quick’s blocker-side shoulder.
The Canucks earned their first power play of the game at a much-needed time when Viktor Arvidsson took a delay of game penalty with 8:51 remaining in the period.
Pettersson was on the right half-wall, made a pass across the ice to Miller, who made a tremendous play to throw the puck right onto Bo Horvat’s stick and into the back of the net. 1-1 after the Horvat power play goal.
We were all tied up once again after another big play by Miller.
The Canucks had a pair of scoring chances with four minutes remaining as Höglander and Horvat both had scoring chances in the slot but were unable to beat Quick.
We saw a lot of chances late in the game but with one minute left, Hughes and Myers played catch with the puck and worked the clock down to zero.
For the second game in as many nights, we were off to overtime.

Halak made a pair of crucial saves and Pettersson had a pair of scoring chances. Horvat had a breakaway where he fired a shot that was saved by Quick.
Overtime solved nothing and we were off to a shootout to find a winner.

Adrian Kempe began and he beat Halak with a shot under his blocker-side arm.
Pettersson deked in tight but Quick stayed with him as Pettersson got in too deep.
Alex Iafallo shot into Halak’s pad on a five-hole shot.
Miller came down the left side and shot into Quick’s pads.
Anze Kopitar missed the net on his shot attempt.
Horvat deked to the forehand and scored to keep the Canucks alive.
Arthur Kaliyev shot the puck into Halak’s pads.
Conor Garland went to the forehand but Quick stayed with him and made a pad save.
Arvidsson skated down the right side and fired a wrist shot into the far side to put the pressure back on the Canucks.
Pearson shot on the blocker side and Quick’s blocker was up to the task.
Kings win 2-1 in the shootout. 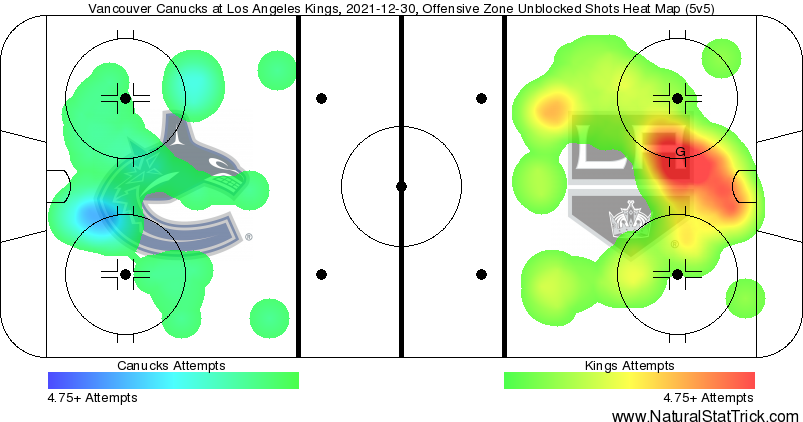 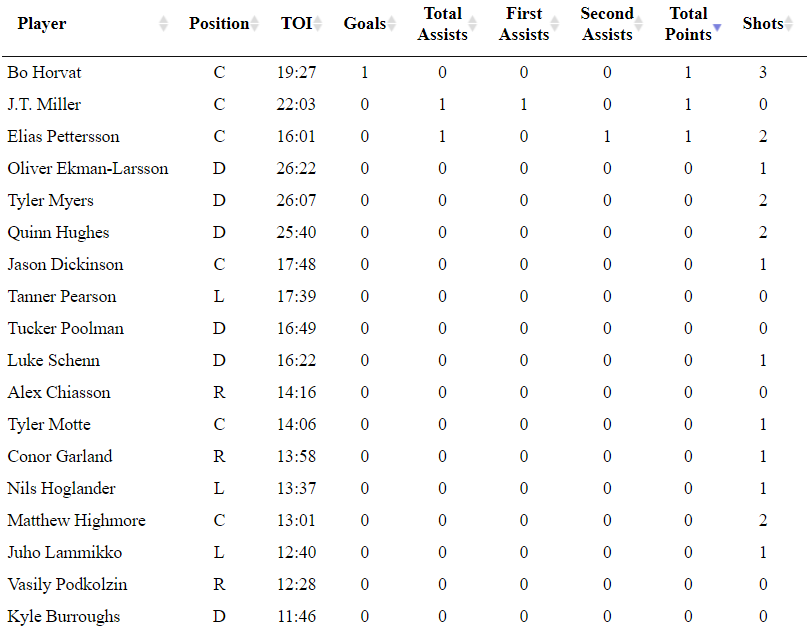 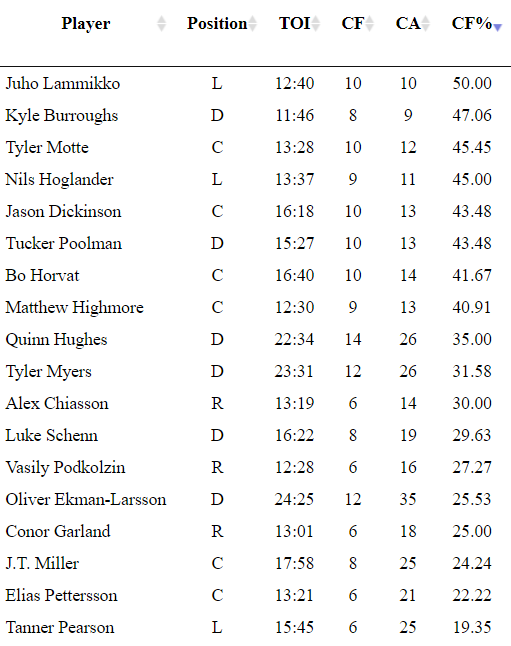 Jaroslav Halak once again struggled to receive any offensive support in a game where he definitely played good enough to get a win. Halak saw 35 shots against and stopped 34 of them before allowing a couple in the shootout.

You have to feel for Jaroslav Halak who has received one goal of offensive support in four of his eight starts this season. The Canucks were able to scrape out a point with a strong third period but could not overcome the dominance that they faced in the second period. The Kings attempted 36 shots in the middle frame compared to the Canucks, who only had six shot attempts in the period.
“They played good, but I mean, our effort wasn’t very good,” said Boudreau in the post-game availability when asked about his team’s second period. “When you have six shot attempts, two on the net, and there were no scoring chances, you know you didn’t play well. I mean, [The Kings] can play really well, when they’re skating but surely to God… 36 to six is no indication of any NHL team playing well. So I mean, we were horrible. The [Kings] played well. But our second period was horrible.”
The Canucks now take New Year’s Eve off before heading to Seattle to face the Kraken on January 1st on hockey night in Canada. Puck drop for Saturday’s game against the Kraken is expected to be at 7 pm and there may be some call-ups from the AHL team in Abbotsford as the Canucks now have three forwards in COVID protocol and only 12 healthy forwards on their active roster.
Uncategorized
Recent articles from Faber