CanucksArmy post game: Canucks hit a bunch of posts and fall to Chicago 1-0 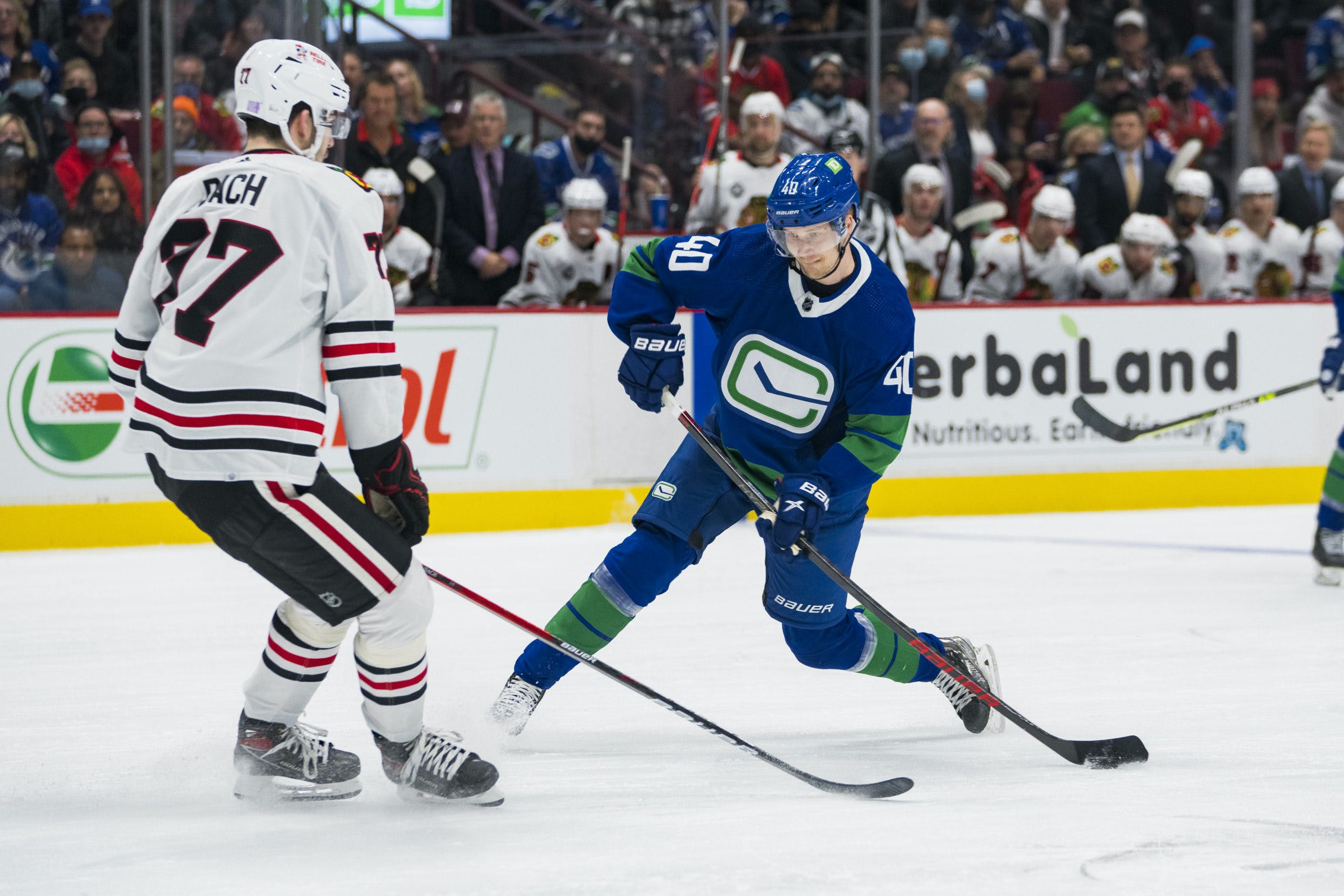 By David Quadrelli
1 year ago
Fresh off of a 5-2 loss at the hands of the Edmonton Oilers on Saturday night, the Chicago Blackhawks were in town to face off against the Vancouver Canucks, who were looking to string together back-to-back wins after defeating the Winnipeg Jets on Friday night.
Here’s how the Canucks lined up in the final game of their homestand:

Thatcher Demko started in goal with Marc-Andre Fleury lining up across from him for Chicago.
Let’s do this!

The game got off to a hot start after a solid shift from the Miller line in which they were tenacious on the forecheck.
That tenacity and hustle led to a tripping penalty just 45 seconds into the game when Connor Murphy was left with no choice but to take down Conor Garland, who managed to elude his check.
The Canucks’ second unit hopped over the boards and nearly converted after Elias Pettersson snapped a hard pass through traffic that was redirected onto Fleury, who had trouble corralling the loose puck.
The first unit hopped over the boards with Alex Chiasson back at the net front. The power play didn’t convert, and the Canucks followed it up with a penalty of their own shortly thereafter.
The worst part? It was arguably their best penalty killer that went off for slashing.
The Canucks managed to kill off the penalty, and it was back to even strength with the Canucks’ PK operating at 100%.
A scary moment arose when Tyler Motte was pushed from behind into Chicago defenceman Riley Stillman. Motte fell into the back of Stillman’s leg, and the Chicago defenceman immediately collapsed to the ground in all sorts of pain. He hobbled off the ice and down the tunnel and would not return.
It was a relatively strong start for the Canucks in this one as they led 11-5 in the shot department at the halfway point of the period.
After Vasily Podkolzin — yes you read that right — won his second career faceoff, offsetting penalties were assessed to Miller — for hooking — and to Murphy — for holding the stick — and we were off to some four-on-four hockey.
Thanks in large part to the possession abilities of Conor Garland and Quinn Hughes, the Canucks controlled the majority of the next two minutes. Unfortunately, they could not convert and this game remained scoreless at the end of the opening frame.

The second period began with one fan audibly chanting “Fleury sucks!” repeatedly. Nobody joined in.
Amid the Fleury sucks chant, Brock Boeser found himself with time and space but rang his shot attempt off the far post.
The fourth line had a great chance after Seth Jones fumbled the puck in his own end on the breakout attempt. Juho Lammikko found Alex Chiasson with a crisp pass, but Fleury managed to fight off Chiasson’s shot attempt.
The Canucks then got a LOT of low-danger chances off on Marc-Andre Fleury, and then got some much better looks off around the halfway mark.
Within the span of 30 seconds, Oliver Ekman-Larsson rang a shot off the post, and then Elias Pettersson did the exact same after breaking into the zone with plenty of time and space.
At the halfway mark of the second, the shots were 24-9 in favour of the Canucks, but this one remained scoreless.
After an incredibly strong shift from Podkolzin and his linemates, Conor Garland took a hooking penalty that really didn’t look like a hook.
The Canucks’ PK hopped over the boards and after killing off over half the penalty, Philipp Kurashev took a tripping penalty and sent the two sides back to four-on-four for 42 seconds.
With over a minute to work, the Canucks’ power play executed a set play to near-perfection and managed to set up Bo Horvat for a one-timer in the slot after some solid work down low by Brock Boeser.
The Canucks’ best chance of the period came when Garland and Podkolzin were sent out with Elias Pettersson in the middle. The trio executed some downright impressive passes and possessed the puck with an incredible amount of poise.
After Garland found a streaking Podkolzin with a pass in front, Podkolzin hit the post on the redirection. By our count, that was the fourth time the Canucks hit the post tonight.
Heading into the third and final frame, this one remained scoreless.

Conor Garland was having an exceptional game up to this point. Through 40 minutes of play, the shots at 5-on-5 were 9-0 in favour of the Canucks while Garland was on the ice.
Chicago struck first when Brandon Hagel deflected a point shot past Thatcher Demko a few minutes into the third period to make it 1-0.
Podkolzin and Garland continued to be two of the Canucks’ strongest forwards, and it just felt like if the Canucks were going to break through, it was going to be because of one — or both — of those players.
The Canucks continued to pour on the offensive pressure, with Tanner Pearson ripping another shot off the post. That was the Canucks’ fifth post of the game, and the Blackhawks held onto their one-goal lead with 10 minutes left to go in this one.
Oliver Ekman-Larsson took a hooking penalty with just over seven minutes remaining and sent Chicago back on the power play.
The Canucks managed to kill off the penalty, and with just over five minutes remaining, went back to work trying to finally break through and put one past Fleury to tie this one up.
This one got interesting, as with 2:18 remaining, Jake McCabe took an interference penalty drawn by Tanner Pearson, sending the Canucks to the power play at just the right time.
With 1:30 remaining and Hughes and Miller playing a seemingly endless game of catch at the other end, Thatcher Demko made a mad dash for the Canucks’ bench to give the Canucks six attackers.
The Canucks cycled the puck around, but couldn’t get a real quality shot through the traffic and onto Fleury.
This one ended with a final score of 1-0 Chicago. 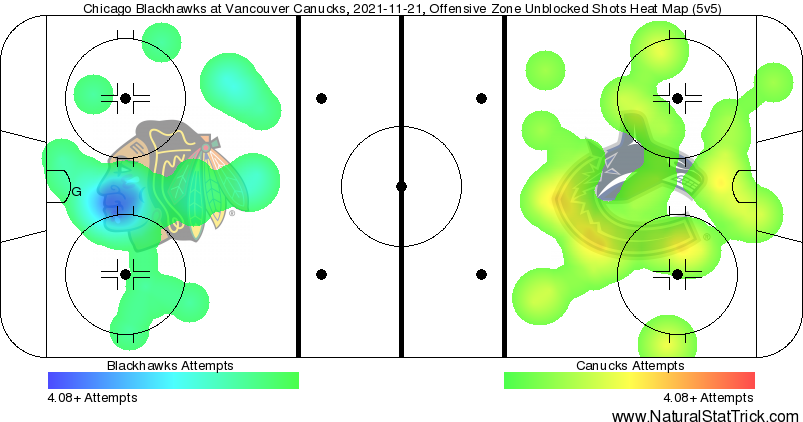 It was another night in which the Canucks played well but didn’t get the results they were hoping for.
“I thought we played really well,” said captain Bo Horvat. “It’s just again, we have to find ways to get it done. Obviously it’s frustrating. It’s not easy and I’m tired of making excuses. We got to find a way to score.”
This is a results-based league, and unfortunately, playing well means very little if you lose as many games as the Canucks have so far this season.
The Canucks embark on a road trip with a game in Pittsburgh on Wednesday against the Penguins. Puck drop is at 4 PM Pacific.
Uncategorized
Recent articles from David Quadrelli