CanucksArmy post game: Canucks come back in third to pull out one point against the Capitals 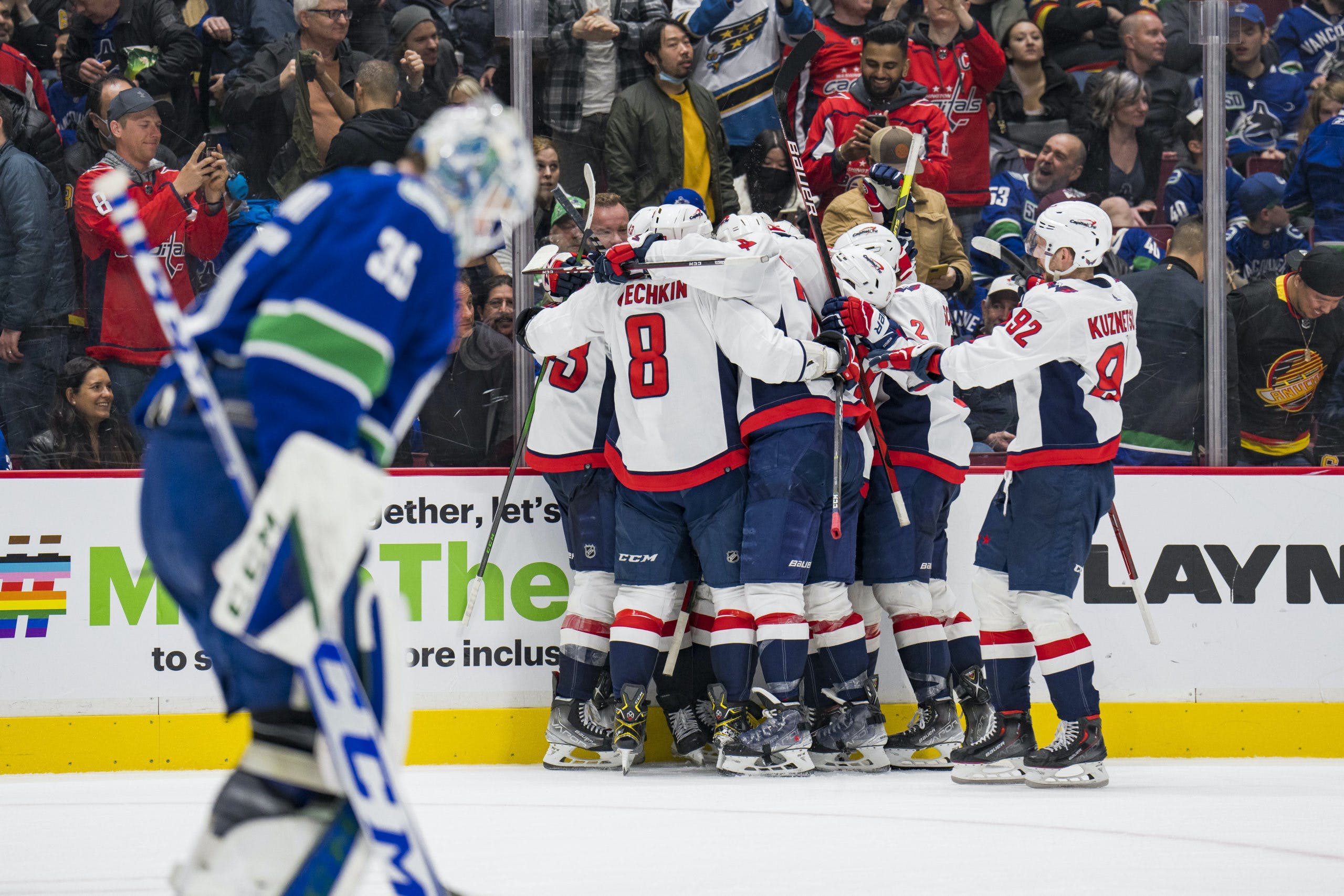 By Faber
10 months ago
Game two of the seven-game homestand took place on a fantastic Friday night where the Canucks celebrated Pride night with a beautiful pregame jersey.
Vancouver welcomed the Washington Capitals in an uber-important game to keep the Canucks in the playoff picture.
There were no changes to the Canucks’ lineup as they went with the same lines as Wednesday.

As for the goalies, the Canucks went with Thatcher Demko and the Capitals countered with Vitek Vanecek.
It was time for Friday night hockey at Rogers arena and you could kiss the masks goodbye as well!
Let’s go!

Both teams were ringing shots off each others’ goalies with pace in the first five minutes of play.
The Capitals were the first to get on the board after an absolutely ridiculous bouncing puck beat Demko off a pair of wild bounces that concluded with the puck ricocheting off of Evgeni Kuznetsov. 1-0 Capitals.
Nils Höglander took a holding penalty with 14:07 remaining in the period and the Caps went to work on their first power play of the game.
It didn’t take long for the Caps to strike again as their potent power play scored a goal off of an Alexander Ovechkin slap shot that trickled through the crease before Kuznetsov smacked the puck off the goal line and into the back of the net. 2-0 Capitals.
Matthew Highmore slipped up while chasing a puck and went hard into the boards and struggled to get up before gingerly skating off the ice. He left the bench and went to the trainer’s room to be looked at.
There were a pair of missed hooking calls on J.T. Miller, who was clearly upset and made himself heard to the referee as he skated off from his shift.
Highmore returned to the bench late in the period after being down the hall for a handful of minutes.
Nic Dowd hit Tyler Motte in the back with a cross-check and the Canucks went to work on their first power play with 4:23 remaining in the period.
There were coincidental minors to T.J. Oshie and Oliver Ekman-Larsson with 2:17 remaining before the penalty to Oshie went under review and was reversed. That sent the Capitals back to the power play.

The refs weren’t in the Canucks’ favour in the opening 20 minutes, as the stripe-wearing gentlemen missed a couple of calls in the first period. As for the play at five-on-five, it felt like the Canucks had a majority of the scoring chances and that was represented in the advanced stats. The Canucks controlled 58.5% of the expected goals at five-on-five in the period.
It was one of those games where things just don’t go their way early and because of that bad luck, the Canucks needed to grind their way through the final 40 minutes to get a positive result.

The opening six minutes ticked off the clock with the only major highlight being a Luke Schenn hit that shook boards all the way out to Kelowna.
Garland was creating scoring chances for all of his linemates as the lines began to see a bit of a shuffle.
The Tyler Motte line stayed intact while the right-wingers rotated through the other three lines.
Schenn continued to have a good game in his role. He stood up for Brad Hunt as he was getting pushed around and almost pushed the Capitals’ player right into the bench.
On the note of Schenn, he and Travis Hamonic swapped positions as well. Hamonic was skating with Quinn Hughes at the halfway point of the second period.
The period concluded without a goal and the Canucks were outshot 12-9 in the period.

There were multiple shifts to the lineup but nothing really stuck for the Canucks.
Schenn had a good period as he threw the body around and made an impact on the momentum.
We were hoping for more action in the final 20 minutes.

The Canucks came out to Nickelback and immediately went to work chipping away at the lead. They worked the puck around the offensive zone before Hughes ripped a shot from the point that beat Vanecek to cut the lead to one. 2-1 Capitals after the Hughes goal.
Elias Pettersson drew a tripping call with 17:14 remaining and the building was buzzing with excitement in a one-goal game. The home team took to the power play with hopes of evening the score.
The hope quickly became a reality when Bo Horvat ripped a shot from the slot into the top corner and tied the game up. 2-2 after the Horvat goal.
The building was electric after the Horvat goal and the Canucks had all of the momentum.
The deafening sound nearly doubled when Horvat picked up a loose puck in the crease, made a move to his backhand, and then flipped it into the open net to give the Canucks their first lead of the game. 3-2 Canucks.
After an extremely strong start to the period, the Canucks went into shutdown mode. The leader of the pack was Demko, who made a big sliding save on Ovechkin with 11:04 remaining in the period.
Tyler Myers took a hit to the head penalty with 6:23 remaining and the Capitals’ power play took the ice with hopes of capitalizing on their glorious chance to tie the game up.
The penalty was weak as heck, Myers basically backed up into the Capitals player and due to his size, his back went into the head.
After the puck hung around in the crease, Kuznetsov banged in his hat trick goal. 3-3 after Kuznetsov goal.
Brock Boeser cut to the net and was tripped with 2:49 remaining in the third period.
A massive opportunity was presented to the Canucks and they had a chance to secure a late lead.
They were able to get set in the offensive zone but didn’t amount a quality scoring chances as the seconds ticked off of the man-advantage.
The remaining second ticked away and we were off to overtime.

Lars Eller came in on a break and crushed the Canucks’ dreams of a massive comeback when he slid the puck through Demko and into the back of the net to call game.
4-3 Capitals win.

Quinn Hughes brought the offence in the third period and quickly tallied three points in a matter of minutes. His goal kicked off the first of three goals in the comeback and he played a total of 25:32 in the game.

The Canucks’ third period brought them back into the game where they could have secured two points. It felt like a Cinderella comeback and that even getting one point was enough to satisfy — this was not the case.
“I mean, we got a point it’s good,” said Hughes. “I noticed after the game, its good — we’re building something where it’s unacceptable to lose. Maybe a year ago we’re a little bit more happy about getting a point. But right now it doesn’t feel so good.”
This team clearly knows how big the points are on this homestand and Hughes spoke about this team making losses unacceptable. That’s good news on a homestand that means so much to this team’s playoff hopes.
As for the third period comeback, Bruce Boudreau said that he didn’t need to go in the room immediately — someone else stepped in.
“Actually, I didn’t go in at the beginning,” said Boudreau. “One of the captains said ‘I’ll take care of this’ and they went in and that’s what leadership is.”
There was a lot of positive takeaways in a game where the bounces and refs didn’t help the Canucks.
The players will look to build off their momentum from the third period into the remainder of the road trip.
Next up, the Tampa Bay Lightning on Sunday.
Uncategorized
Recent articles from Faber