CanucksArmy post game: Canucks battled hard for one point in a playoff style game on the second night of a back-to-back By Faber
8 months ago
After a big upset win over the league-leading Colorado Avalanche, the Vancouver Canucks flew into Minnesota with the hope of playing another ballsy game where they could sneak out a win on this tough four-game road trip.
Even with Jaroslav Halak having a tremendous performance on Wednesday night, it is a big jump in skill having Thatcher Demko go back between the pipes for the Canucks. Demko started against Cam Talbot, who got the call to the crease for the Wild. Talbot has been on a hot streak of late. He’s 6-0-0 in his last six starts and holds a 0.917% save percentage over those games.
The team received a strong performance from Travis Dermott in his Canucks debut. The puck was rarely in his zone during the 15:43 that he played on Wednesday. Dermott will look to build off his good start with the Canucks as he was paired alongside Brad Hunt. Dermott had some penalty kill time and overall made a strong impression in his debut.
The lines remained the same with Elias Pettersson continuing to play on the wing with Brock Boeser and Bo Horvat.

It needed to be a strong performance in the first period for the Canucks to feel comfortable in this game. Their slow starts have been costing them all season long and they needed to show up on the second of back-to-backs.
We’re all set for puck drop in St. Paul, so we’re going to head right into it.
Let’s go!

Luke Schenn looked to fire up the team early as he fought Marcus Foligno in the first minute of the game. Both men were throwing bombs and it set the tempo for a fast-paced first period.
The Canucks came down for a three-on-one and Pettersson made a pass across to Boeser and Talbot made a big save but the puck bounced right to Horvat in the slot and he ripped it into the top corner. The Canucks took a much-needed early lead as Horvat extended his goal streak to three. 1-0 Canucks.
The Canucks were able to keep the Wild without a shot for the opening eight minutes but then Kirill Kaprizov found space in the slot and wired a wrist shot over Demko’s glove, off the crossbar and in. 1-1 after the Kaprizov goal.
The Canucks were driving play through the middle part of the period. Their possession through the neutral zone was strong as each line was driving play into the Wild’s zone.
Oliver Ekman-Larsson got into it with Jordan Greenway after a whistle and both players were sent to the box with coincidental roughing minors. That sent the game into four-on-four action with 33 seconds remaining in the period.

The Canucks had a strong first period in the neutral zone as they drove play and won board battles. The problem was their giveaways in their own zone. Once the Wild were able to gain the offensive zone, they were able to stay there for extended possessions. The Canucks outshot the Wild 10-8 in the period but the Wild were leading when it came to scoring chances.
It was a feisty start to the game as the Wild players were often getting sticks in on Demko. You have to give the Canucks credit as they were standing up for their goaltender and being sure to throw some fists into the Wild players who were being aggressive towards Demko.

The Wild came out and had a ton of energy in the opening couple of minutes. Demko allowed a rebound and it came right to Kevin Fiala, who spun and shot a puck through Demko to give the Wild their first lead of the game. 2-1 Wild.
It was a physical first 10 minutes of the period with the Canucks being on the receiving end on most of the damage. Tanner Pearson took a couple of big hits but continued to skate hard through the contact.
The Canucks had a delayed penalty on Brad Richardson for roughing but the Wild were able to get set up with six attackers and moved the puck around with the extra man. Jon Merrill fired the puck through a crowd that beat Demko.
The Canucks challenged the goal for offside and the play was overturned. That meant that Richardson went to the penalty box but there was no goal on the play.
Richardson’s penalty was a weak one as it was a small push during a scrum and the Canucks went to the penalty kill with 9:26 remaining.
Quinn Hughes came up big on the penalty kill with a pair of clears. The Canucks were able to kill off the penalty as the hockey gods realized that Richardson’s penalty was a weak one.
The Canucks earned their first power play with 3:36 when Mats Zuccarello took a slashing penalty.
There were some chances but the Wild were able to keep the Canucks off the scoreboard.
Seconds ticked away and the Canucks skated off the ice down by one goal.

The Wild brought it in the second period and could have been up by more than one goal but the Canucks were able to hold on. It was a strong push physically from the Wild as they made the Canucks pay for having the puck on their stick. The Wild outshot the Canucks 13-10 in the period and the Canucks needed to have their best period of the night in the third period to come away with any points in this battle.

The Canucks had an early power play due to a delay of game penalty and they went to work with the man advantage less than five minutes into the period.
They weren’t able to score but the Canucks did build some momentum with a few good quality chances and strong possession with the man-advantage.
Hughes took a stick to the face from Zuccarello with 12:10 and that gave the Canucks another chance on the power play.
It didn’t take long as J.T. Miller quickly gained momentum and then let go on a wrist shot that beat Talbot clean past his glove. 2-2 after the Miller goal.
The power play only took six seconds to score and the Canucks rode the momentum of their good play into more possession time in the Wild’s zone.
Horvat took a cross-checking penalty with 10:36 as he got into it with Ryan Hartman.
Demko made a big glove save on Kaprizov and the Wild continued the power play pressure by hitting the post just seconds later. The Canucks killed off the final few seconds by jamming up the neutral zone and we were back to five-on-five hockey with 8:30 remaining in the period.
Podkolzin continued to have a good game and drove the net before going to the backhand and just missing the net. He was skating hard in the third period and was one of the better Canucks in the first 15 minutes of the third period.
The Wild brought all they could in the final few minutes but the Canucks were able to bend and not break.
We’re getting some free hockey.

The Canucks began with pressure and Miller had room but rang his shot off the post. the Wild counter-punched with a breakaway for Joel Eriksson Ek. He made a tremendous double deke to the forehand and beat Demko.
Wild win 3-2 in overtime. 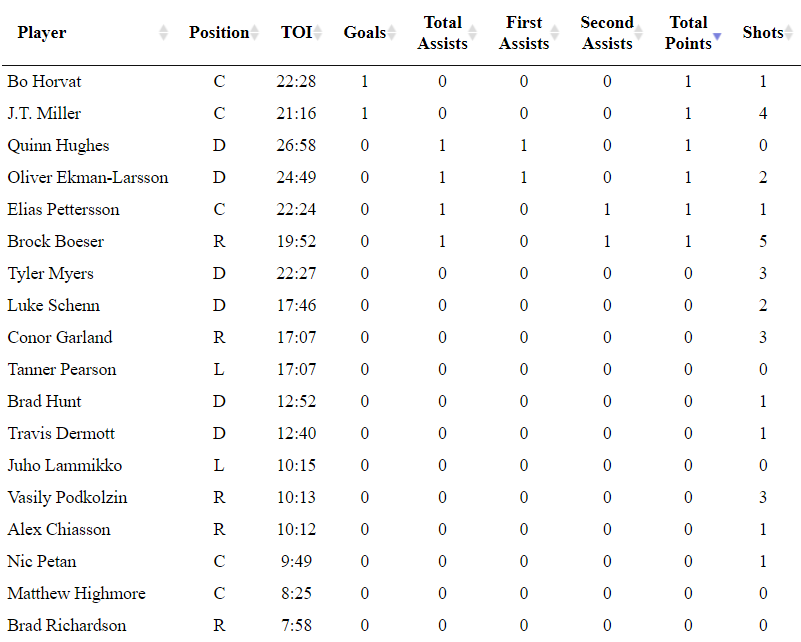 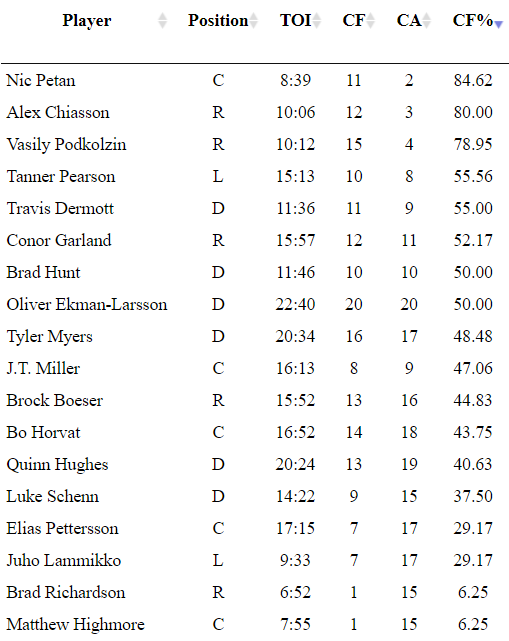 Vasily Podkolzin may have not found the scoresheet but he was our player of the game from Thursday night. Podkolzin controlled 79% of the Corsi for on the night and was on the ice for eight shots on net and only four shots against. Podkolzin was physical, made good passes and was skating at full speed all night. It was one of his better games this season.

The Canucks had to battle through the 60+ minutes. Bo Horvat said it felt like, “playoff hockey,” in the post-game media availability.
“If you want to be a hockey player, you have to embrace these moments and embrace these types of games,” said Horvat. “You’re going to get smacked around and guys have to step up. and for me, I want to be one of those reasons why we get in the playoffs.”
Even with the standings providing a daunting task, the Canucks continue to work their way into a playoff battle and picking up three points on a back-to-back with travel is a positive for the Canucks.
Bruce Boudreau called it a, “really good point,” as the Canucks were able to work their way for a result.
The Canucks are back in action on Saturday for a 4 pm puck drop against the Dallas Stars. We will have you covered here at CanucksArmy.
Uncategorized
Recent articles from Faber