CanucksArmy post game: The Canucks were absolutely horrible and lost 7-1 to the Avalanche 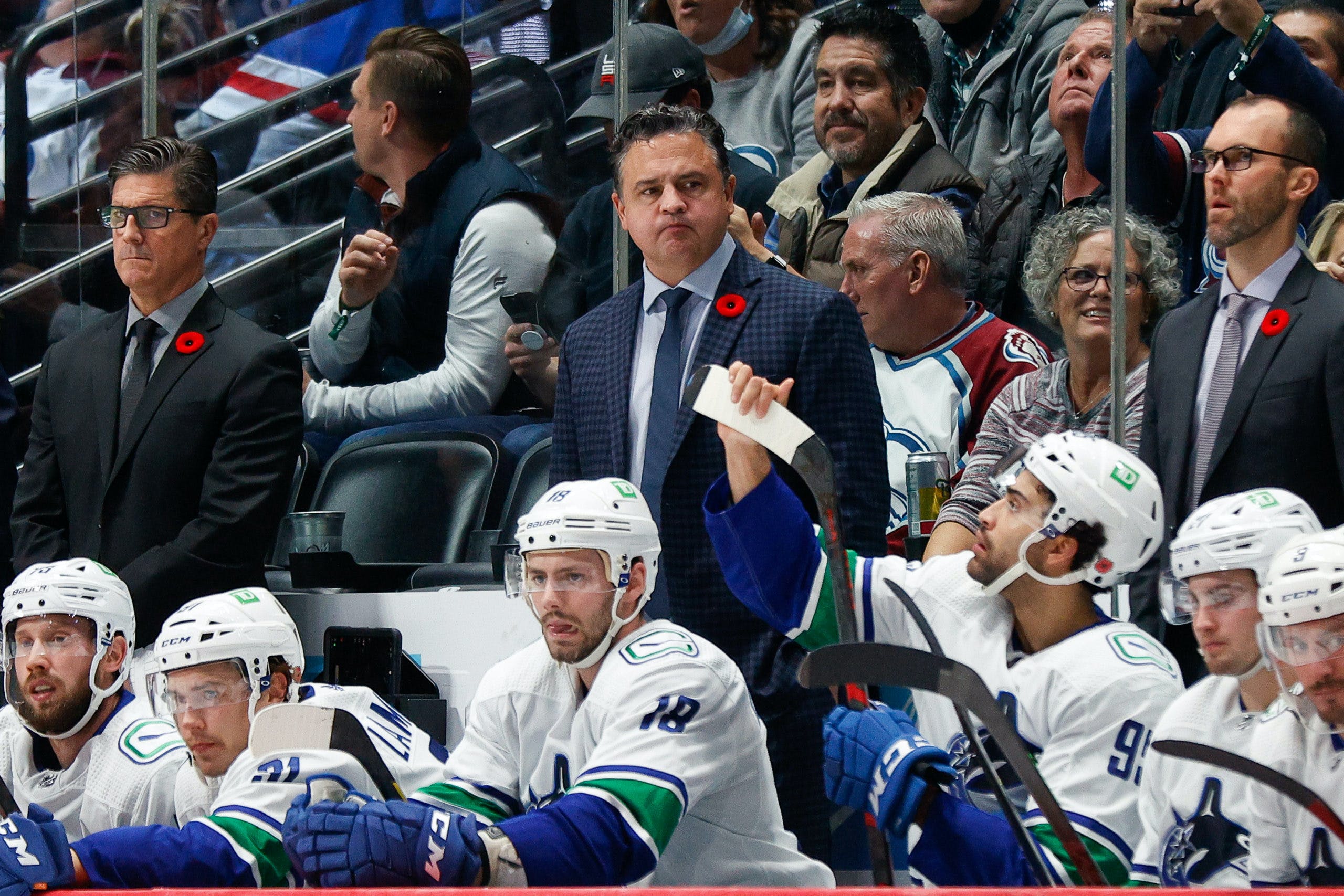 By Faber
1 year ago
The Vancouver Canucks kicked off a three-game road trip with a visit to the mile-high city as they faced off against the Colorado Avalanche.
It didn’t go well. It went horrible.
Absolutely horrible.
Anyways…
With Travis Hamonic not making the trip, Jack Rathbone was added to the roster and drew into the lineup alongside Kyle Burroughs on the Vancouver Canucks’ third pairing.

Tyler Motte made the trip but did not draw into the lineup for the first game of the three-game trip.
Nathan MacKinnon was out of the lineup, so the Canucks didn’t have to worry about him. Unfortunately, it didn’t matter where MacKinnon was because the Avalanche were about to go off.
Thatcher Demko received the call to the crease to kick off the road trip while the Avs turned to Darcy Kuemper to occupy the blue paint.
It was a six o’clock start on a Wednesday night and without further ado…
Let’s go!

The first scoring chance came to old friend turned new foe, Jayson Megna, as he found space in front of the net but was hooked by Vasily Podkolzin. Podkolzin went to the box and the Avalanche went on their first power play.
The Avs’ second unit gained the zone with speed, and Jason Dickinson lost his man when he let off the gas on the backcheck for a second and Valeri Nichushkin found the yawning cage off of a rebound and buried it. 1-0 Avs.
Juho Lammikko drew a dripping penalty just a few seconds later and the Canucks went to work on their first power play attempt.
Elias Pettersson looked like his blade was made of Swiss cheese as he struggled to control the puck. The Canucks were unable to get a shot off as the Avs cleared the puck with ease and killed off the penalty.
Colorado continued to dominate the pace of play and they showed incredible movement while moving the puck around in the zone that ended with a great pass from Cale Makar to Gabriel Landeskog at the side of the net and he ripped it past Demko. 2-0 Avs.
The Canucks were down 2-0 just 7:34 into the game and were battling uphill early after their special teams let them down once again.
It took 10:52 for the Canucks to get their first shot on net. Bo Horvat crossed the blue line and fired a long shot in on Kuemper.
Just after the magic that was the Canucks’ first shot of the game, the Avs forced a turnover and Mikko Rantanen ripped the Avs’ third goal past Demko. 3-0 Avs.
The early stages of the first period gave the vibe that it was going to be a long game, and likely a short post game.
Nils Höglander gathered a rolling out and rang a backhand off the bar with 30 seconds left in the period. That was as close as the Canucks came in the period.

It was a disastrous first 20 minutes for the Canucks. Travis Green called his timeout after the third goal was scored.

Shots were 17-3 at one point early in the second period.
Through the first 26 minutes of the game, there were no Canucks players who looked like they were having a good game. What I will say is that it was nice to see Rathbone back in the lineup. There were a few good sequences where Rathbone broke up cycles and quickly got the puck up into the neutral zone on a counter-attack.
The Canucks actually went on a little bit of a possession run as they approached the halfway point of the period. They registered six shots in a row before the Avalanche could fire a shot at Demko.
The Avalanche extended their lead to four just past the halfway point of the period. Logan O’Connor was at the end of a long possession in the Canucks zone that looked like a power play for the Avalanche. 4-0 Avs.
The Avs just looked so much better than the Canucks at turning their possessions into dangerous scoring chances. The Canucks were floating shots from the boards or near the blue line. The Avs were consistently getting shots off within inches of the crease.
After a boarding penalty, the Canucks went to their second power play of the game with 5:26 remaining in the period.
The Avs scored a shorthanded goal during a two-on-one. 5-0 Avs.
The Avs won an offensive zone faceoff and scored again. 6-0 Avs.
That was it for the period.

Jaroslav Halak came out in place of Demko for the third period and with it, the comeback was on!
Nils Höglander scored his second goal of the season just one minute into the period. 6-1 Avs after the Höglander goal.
Tucker Poolman took a penalty for swinging hit stick into another player’s face with 9:39 remaining. The penalty was reviewed and Poolman was given a five minute penalty and sent out of the game.
The Avs scored early into the power play when Jimothy Timothy Compher hit a puck out of mid-air in the crease to beat Halak. 7-1 Avs.
The Avs still had more than three minutes on the power play and went to work to get more.
Rantanen took a cross-checking penalty with 46 seconds remaining in the Avalanche’s long power play. It was time for some four-on-four.
After the quick four-on-four, the Canucks went to their third power play of the game. They were unable to score on either of their first two attempts and continued that trend by not scoring on their third power play.
The final horn went and it was glorious.
Because it meant the game was over.
7-1 Avs, final.

Literally, nobody. Bo Horvat didn’t even win a high percentage of his faceoffs on Thursday night. There are no moral victories here.

This game sucked so bad.
Let your voice be heard in the comments.
Uncategorized
Recent articles from Faber