CanucksArmy post game: Bo Horvat puts the team on his back as Canucks beat Devils 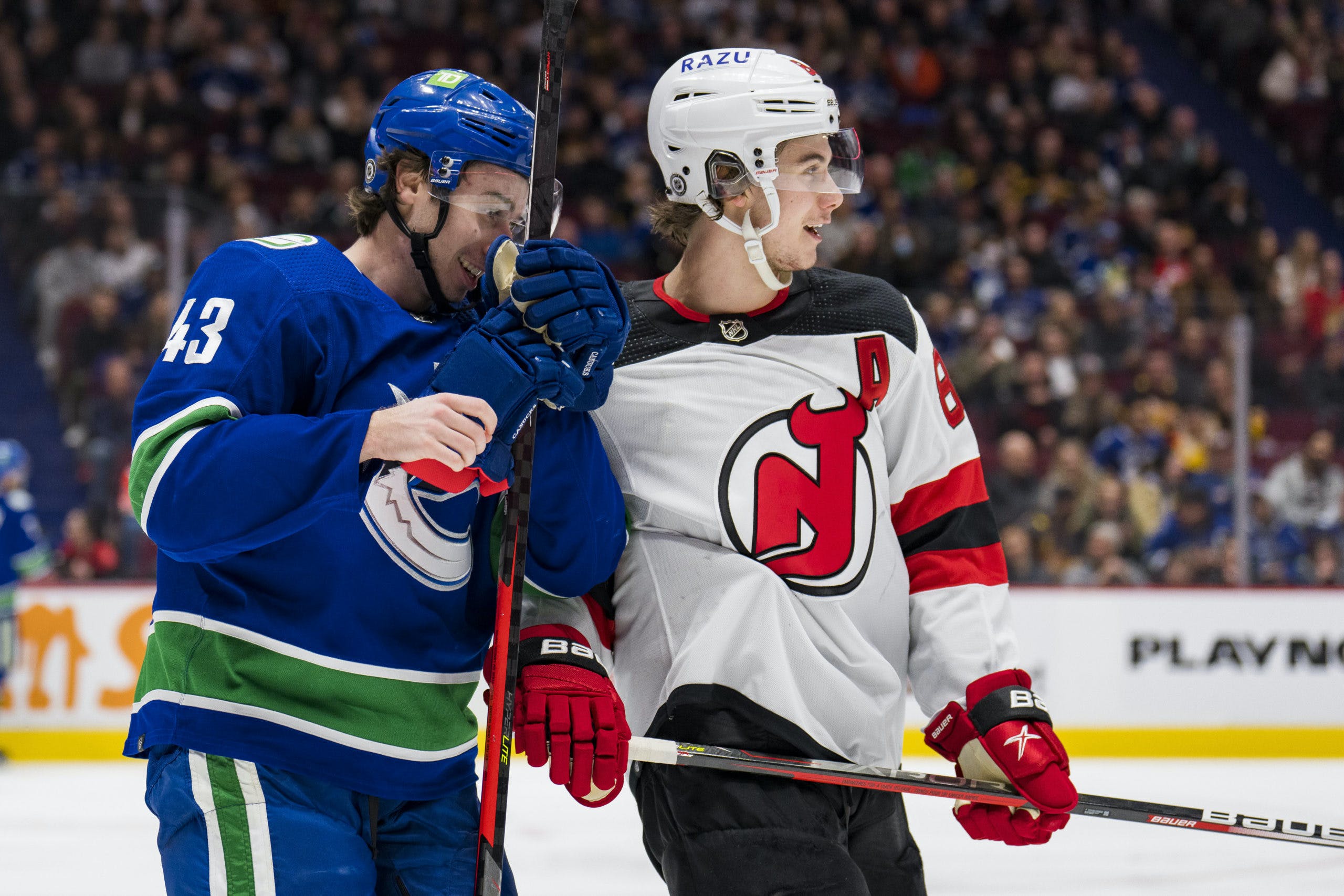 By David Quadrelli
8 months ago
The Vancouver Canucks were back in action tonight for yet another critical game with Jack Hughes and the New Jersey Devils in town.
It was a fun one, so let’s just get right to it, shall we?

The Canucks were without Elias Pettersson tonight and this opened the door for Delta, B.C. native Nic Petan to slot into the lineup in his place.
Quinn Hughes played almost exclusively with Travis Hamonic last game, but clearly the coaching staff didn’t like what they saw, as Hughes was back with his regular partner, Luke Schenn.
Let’s do this!

The Devils’ speed was apparent right away, and the Canucks had to be sharp early on in order to match.
The Canucks struck early after struggling to break the puck out of their own end while dealing with the Devils’ forecheck.
It was the local boy Brad Hunt who found the back of the net to make it 1-0 Canucks.
Quinn Hughes set up J.T. Miller for the Canucks’ best chance of the period, but he was absolutely robbed by Nico Daws, who made a strong push off his right leg to get across and get a pad on the shot.
The Canucks were in the driver’s seat for the first ten minutes, and wasted little time adding to their lead.
This time, it was Nils Höglander who converted on a nice feed from Brock Boeser. 2-0 Canucks.
The Devils struck back in a hurry, and wouldn’t you know it, it came off a chance on the rush where Höglander lost his man and allowed Ryan Graves to get a wrist shot off on Demko. 2-1 Canucks.
J.T. Miller found himself at the front of an open net with the puck in front of him. Unfortunately, Miller couldn’t make contact with the puck after taking a swipe on the backhand at it.
This one remained 2-1 heading into the second.
Side note — it appeared like NIls Höglander was wearing Elias Pettersson’s gloves in this one, and Höglander confirmed post game that he has been all season long.
“I always wear them, I really like them,” said Nils Höglander. “They’re more comfortable.”

The Devils started the second with a strong shift by the Jack Hughes line.
Miller had another grade-A opportunity when Quinn Hughes sprung him for a breakaway with a pass at the New Jersey blue line. Miller moved in on Daws and tried to tuck the puck past the New Jersey goaltender’s pad to no avail.
Then Jack Hughes buried a breakaway chance of his own to tie this one up 2-2.
The Devils had the Canucks a bit more on their heels through the first five minutes than they did in the first period.
It was a good test for the Canucks, who already passed their first test of the game: Don’t come out flat in the first period.
J.T. Miller had another grade-A chance but missed the net on a wrist shot from the slot. Miller was visibly frustrated, and rightfully so. The point streak was already alive and well, but Miller could have had two or three goals by the halfway point of the second period. Instead, he had none, and this game was tied.
Bo Horvat walked down the left wing and wound up for a clap bomb that we’re certain made Elias Pettersson smile wherever he was watching the game from. 3-2 Canucks.
Then, before Al Murdoch even had a chance to announce the Horvat tally, Tyler Myers set up Tanner Pearson with a beautiful slap pass that Pearson redirected home with ease to make it 4-2 Canucks.
Nico Daws got the yank in favour of Jon Gillies.
After spending extended zone time in the Devils’ end, the Canucks gave up another goal that came as a result of New Jersey’s speed.
Nathan Bastian was first on a puck that ricocheted off Thatcher Demko’s mask and poked the loose puck to cut the Canucks’ lead down to 4-3.
Tyler Motte took a double minor for high-sticking with just under two minutes remaining and gave this game its first power play.
The Canucks escaped the period unscathed and this one was about as close as it gets.
The Canucks held onto a one-goal lead and a one-shot lead on the shot chart heading into the third period.

The Canucks began the period with over two minutes of penalty time left to kill off, and Bo Horvat went to work shorthanded.
Horvat absolutely sniped a shot high blocker on Gillies after getting a nice stretch pass from Quinn Hughes to make it 5-3 Canucks.
“He was a true leader for us tonight,” said head coach Bruce Boudreau, who cited Horvat’s goal as a momentum-swing for his club in the game.
Just before the halfway point of the period, the Canucks got their first power play of the game after Colton White took down Conor Garland after Tyler Myers poked the puck up to him in the neutral zone for a partial breakaway.
The Canucks’ Pettersson-less power play failed to generate much, but struck quickly after the penalty expired.
Bruce Boudreau’s hardest working line went to work, and Juho Lammikko redirected a Luke Schenn shot into the back of the net to make it 6-3 Canucks.
Bo Horvat took a tripping penalty with just under four minutes remaining, but it didn’t matter much.
6-3 Canucks final. 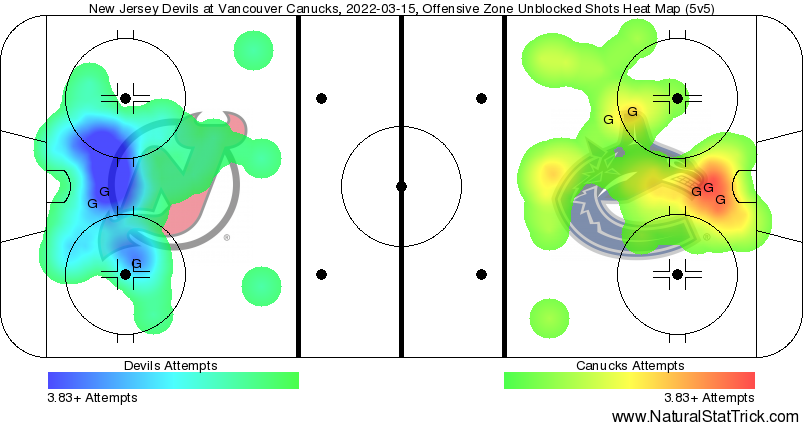 The Canucks got some good news and some bad news on the out-of-town scoreboard tonight.
The good news: Vegas lost in regulation, further fuelling their rapid descent from third place in the Pacific Division.
The bad news: Edmonton won in regulation, which means that the Oilers are quickly becoming the team the Canucks will have to surpass to take hold of third in the Division if they want to secure a playoff spot.
Sure, there’s the outside chance of a wild card spot, but those will both likely go to Central Division teams.
The Canucks have roughly six more regulation losses left to give if they want to control their own destiny when it comes to their playoff odds.
There’s no other way to say it — tonight was a big two points, and every game will likely matter from here on out.
Don’t look now, but the Canucks’ last game of the season is against the Oilers in Edmonton. That game could have serious playoff implications.
But we’ll try not to get too ahead of ourselves just yet.
The Canucks won a very important game tonight against a team that absolutely throttled them not too long ago, and right now, that’s all that matters.
They’ll do it all over again in another uber-important game on Thursday night against the same Detroit Red Wings that pushed the Oilers to their limit tonight but came up just short.
We’ll have you covered Thursday morning with a full scenes from morning skate article to get you all ready to go for that one.
Uncategorized
Recent articles from David Quadrelli